The Pillocks Of Hercules

It has been a sad week, with the loss of one of our great comedians, Tim Brooke-Taylor, to the Coronavirus. During the government’s daily press conferences, Matt Hancock has been paying tribute by playing his own version of the radio panel game, I’m Sorry I Haven’t A Clue Where The PPE Is. 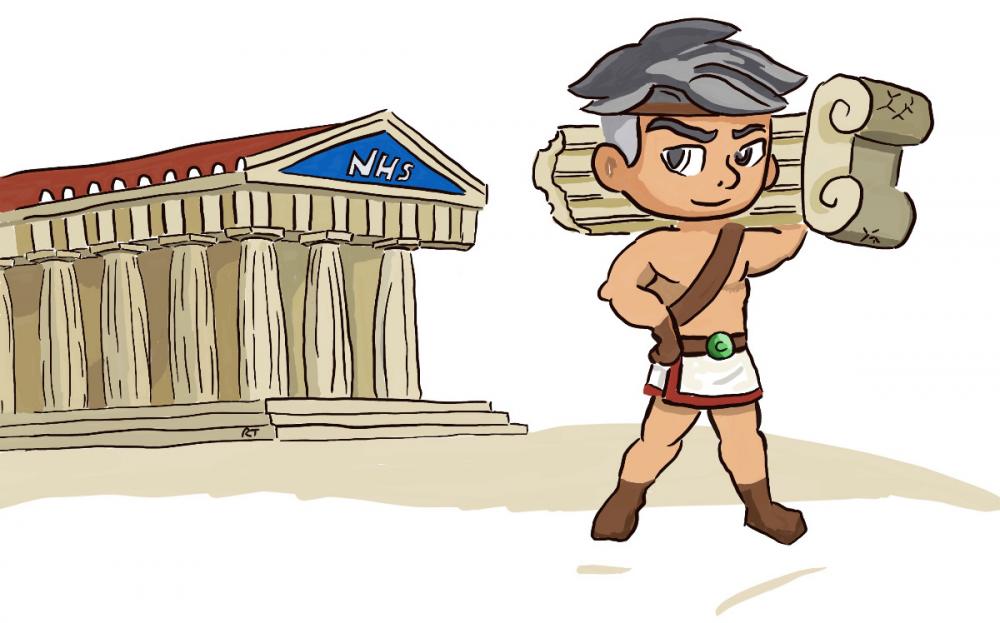 At one point, Hancock compared the task of acquiring PPE to one of the tasks of Hercules, the difference being of course that Hercules actually managed to achieve his. I must say, the Herculean task it most reminds me of is the cleaning of the Augean stables, mostly because the daily press conferences contain a huge amount of bullshit. How else can one explain Hancock’s statement on the deaths of a significant number of NHS workers who had been treating Covid-19 patients? “We aren’t aware of any links from shortages of PPE to any of these deaths,” he said. Mmm, yes, it must just be a coincidence. As General Melchett memorably commented, “If nothing else works, a total pig-headed unwillingness to look facts in the face will see us through.”

In an echo of the commemorative Brexit tea towels and 50p coins, Hancock revealed that care workers would now be entitled to a badge. Thanks, Matt. Maybe you could drop off some gowns and face masks while you’re delivering them? Or will people just be awarded them posthumously? The badges simply read “CARE”, which I think stands for “Can Anyone Requisition Equipment?”.

Even this announcement couldn’t go right, as it turned out there were insufficient supplies of the badges. Perhaps the government could commission Dyson to make some more: surely they must have finished those ventilators by now?


Also by Roger Winterbottom...
The Last SpaffStatues And LimitationsLying DoggoMisled By DonkeysStay Inert, Control The Media, Save Squirrels
She also demonstrated her inability to read a number off a piece of paper as she solemnly informed us that the number of tests that had been carried out was three hundred thousand and thirty four, nine hundred and seventy four thousand. So that’s how the government is going to meet that target of one hundred thousand tests per day – by making up its own numbering scheme. I’d have stuck with binary instead if I were her: 100000 would equate to 32, which I think they’re just about managing now.

Patel followed this up by explaining that she had been working seven days a week, before immediately correcting this to three. I’m not convinced maths is her strong point, but then I’m not sure anyone has ever located her strong point.

Before her press conference, there had been a growing clamour for her to put in an appearance. Suffice to say that, after that performance, she’s unlikely to be appearing again soon. Like the Cheshire Cat, as she vanished from the scene, her smirk seemed to linger in the air after the rest of her had disappeared.

It doesn’t seem long since the Prime Minister was telling us that he had a “clear plan to give every older person the dignity and security they deserve”. As the Coronavirus sweeps unchecked through care homes across the country, that plan doesn’t seem to be so much oven-ready as crematorium-ready.

Boris was full of praise for the NHS staff who had looked after him during his time in hospital, singling out two of the nurses for special acclaim, saying, “I can’t thank them enough.” One of the nurses said that she was “blown away” by this. Just wait till she gets her reward: as a non-UK citizen, she’ll get an increased £625 annual bill for the privilege of using the NHS that she helps to keep running and for which she is currently risking her life.

After leaving hospital, Boris and his fiancée travelled to Chequers to recuperate. Shouldn’t they still be self-isolating? And isn’t there supposed to be a law against travelling when you’re still infectious? Perhaps there is an exemption for Cabinet ministers, since Robert Jenrick similarly drove 150 miles to his second home. Or is it his third? It’s so hard to keep track.

Still, now that Boris is there, he can indulge in some of his favourite hobbies – making buses out of wine boxes, that kind of thing – while Dominic Raab tries to work out if he’s allowed to make any decisions. He may be some time.

Meanwhile, it seems that others in isolation are experimenting with other pursuits, judging by the story this week that sales of sex toys have, er, swollen hugely. With nowhere to go and not much else to do, I suppose that it gives people a reason to get up in the morning. Or any other time they fancy.