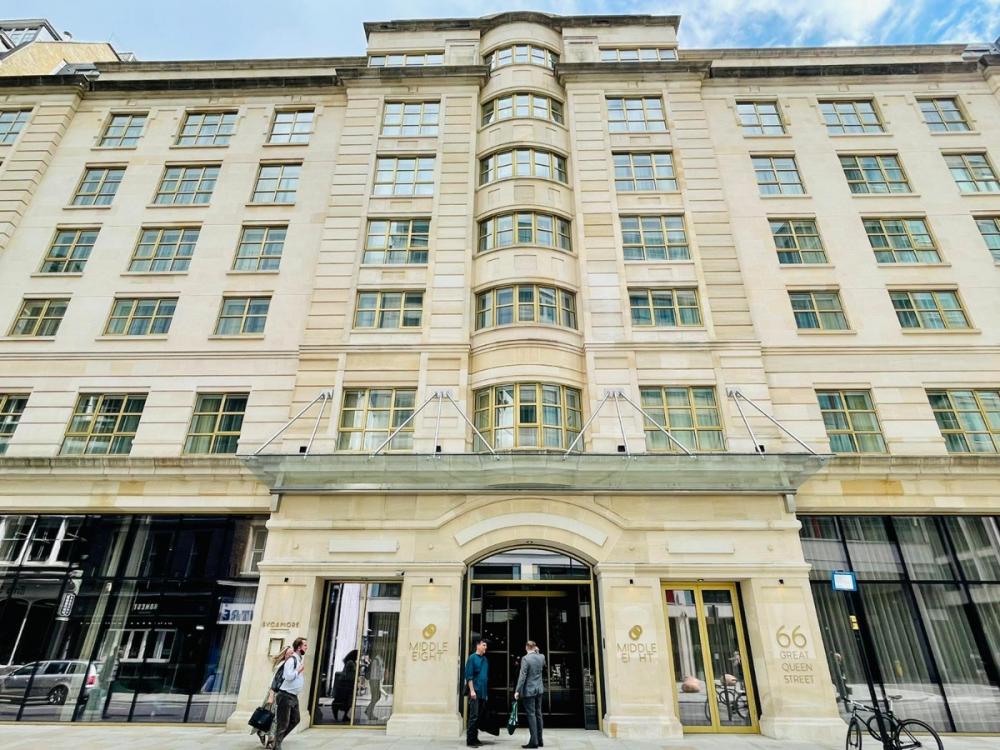 The founding father of the Methodist Church, John Wesley – once dubbed ‘the best loved man in England’ – would, most probably, have abandoned sobriety had it been to raise a glass to London’s Middle Eight Hotel, newest occupant of the former Kingsway Hall Methodist Church!

And, although it might seem like something of a stretch, both the man and the property have something in common: they were, and are, ‘game changers’. One shook the very core of the established church in England, and the other has created something with the potential to shake up the ‘old ways’ of hospitality.

These days it is simply not enough to have crisp linen sheets and a stunning backdrop, and hotels fight a daily battle to achieve differentiation in a market where the opportunity to be ‘different’ seemingly gets more and more difficult. 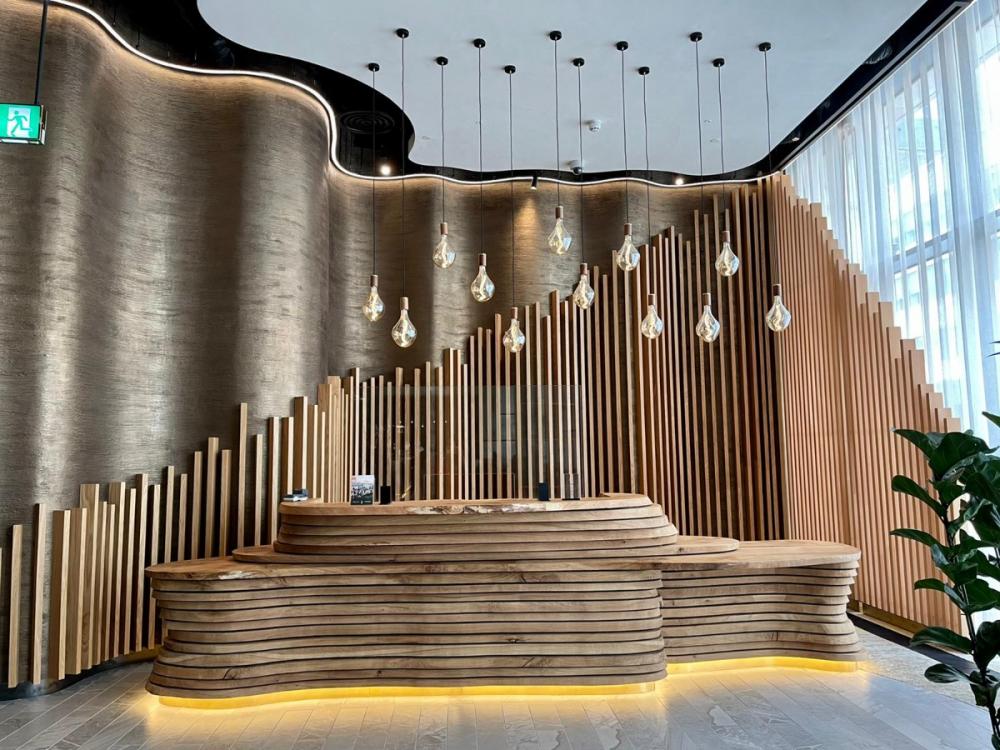 The spectacular hotel reception area
“Meester ‘opkins. ‘ow lovely to meet you. A glass of water?”

“No,” she beamed, “I am Italian but I ‘av not been ‘ome for ages because of the pandemic.”

“Neither have I,” chimed my Filipino wife, Princess, eager to share the mutual sorrow of a homeland temporarily lost.

The immaculately groomed receptionist was beyond charming gesturing us to one of the beautifully designed reception chairs where, nearby, piles of driftwood had been transformed into an exquisite piece of wall art. 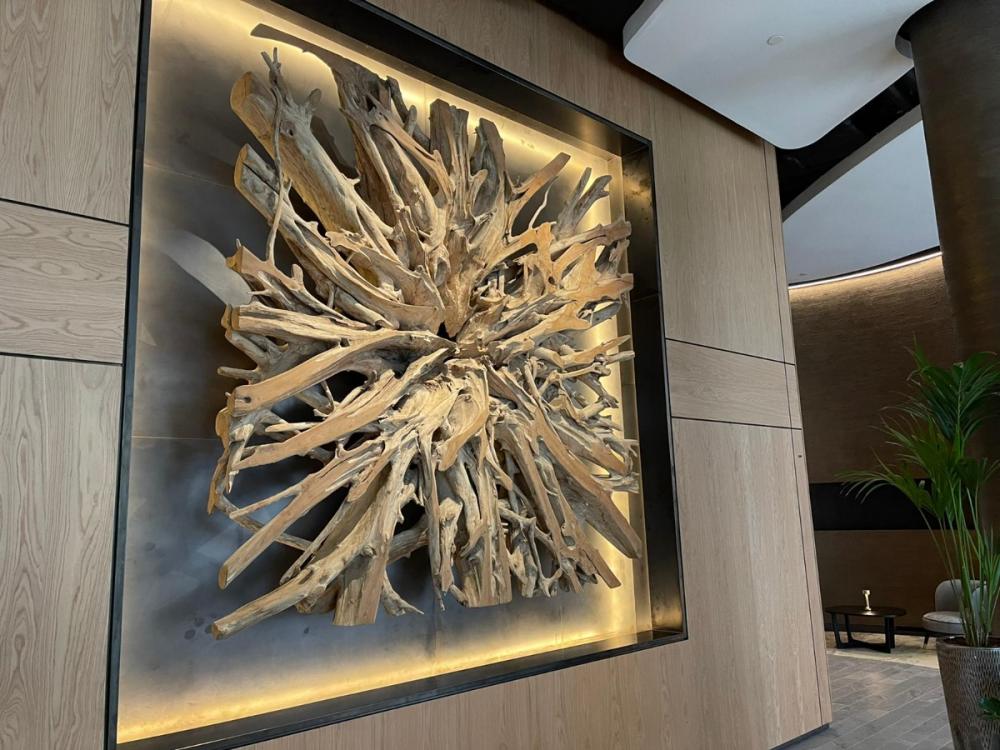 We chatted as though time were of no concern and our amiable host regaled us about the green credentials of the hotel, along with a well-rehearsed explanation as to the origins of its name.

In music, the ‘Middle Eight’ has a significantly different melody and lyrics, injecting variety into a song. It lifts the composition by changing the key or tempo, an appropriate name, perhaps, for a hotel that is setting out to do just that: raise the industry game.Even the credit card shaped ‘key’ to our Sunrise suite had a wooden exterior.

“We do not ‘av paper in zee roomz,” said our new travelling companion as she accompanied us to our suite, “other than zee books on zee shelves,” she added with a twinkle in her eye, departing with the promise of never-ending assistance should we have any problems.

My Italian was less endearing: “Bloody ‘ell, this is nice,” I said to my wife, who replied in her native Tagalog: “Ganda,” adding the English word, “beautiful” as though a translation were really needed.

The room’s blue and brown hues made for a sea of calm and, true to her word, there were no manuals, pop up cards or leaflets articulating the merits of the hotel, just a remote control to access a glossary of information on the lounge tv or, as we would find out soon enough, on the second screen which, on command, rose from the foot of the bed like Poseidon from the ocean!Not wishing to waste what remained of the afternoon we pulled on fresh clothes and headed out promising to explore later.

Middle Eight is situated on Great Queen Street and is equidistance between Holborn and Covent Garden tube stations, meaning it is all of a 10-minute walk to the hubbub of the Royal Opera House, street entertainers and the Punch and Judy tavern: another five minutes and you are in Leicester Square.

“Let’s get a bite now,” said my wife, “before Amelie starts. I fancy pansit,” she said, the all-encompassing name in the Philippines for anything with ‘noodles’. I knew we were on safe ground with at least 30 outlets to choose from in China Town which ran parallel with Leicester Square. 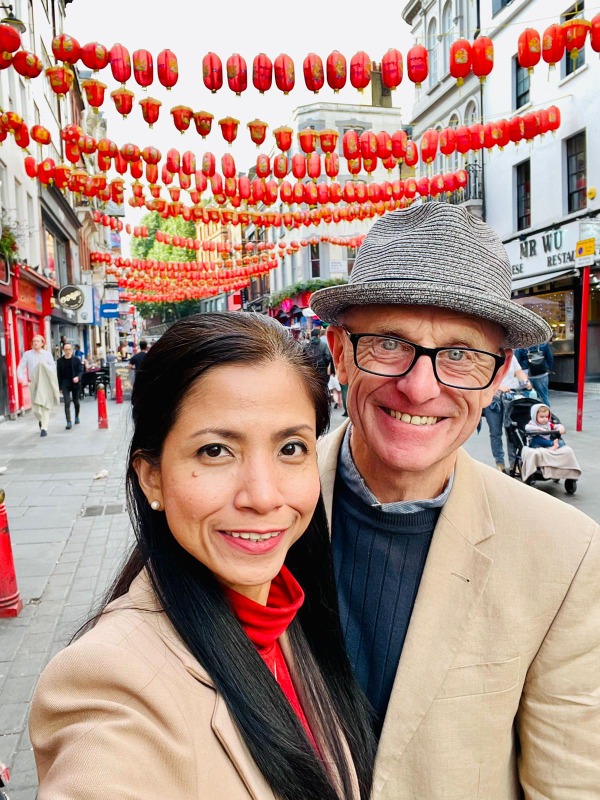 Fed and watered we headed off to the nearby Criterion Theatre... 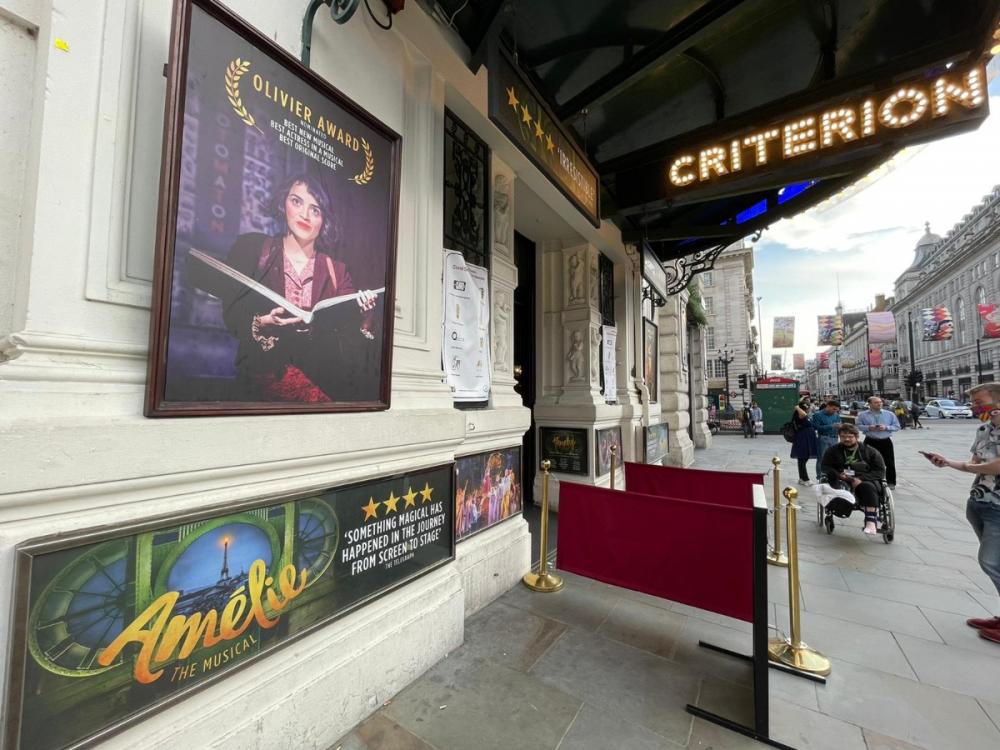 ...to take in the 7.30pm performance of Craig Lucas, Daniel Messe and Nathan Tysen’s feelgood musical adaptation of the Oscar-nominated film, Amelie, which tells the story of a petite French heroine of the same name who is a victim of loneliness and isolation in the bustling metropolis of twentieth century Paris. 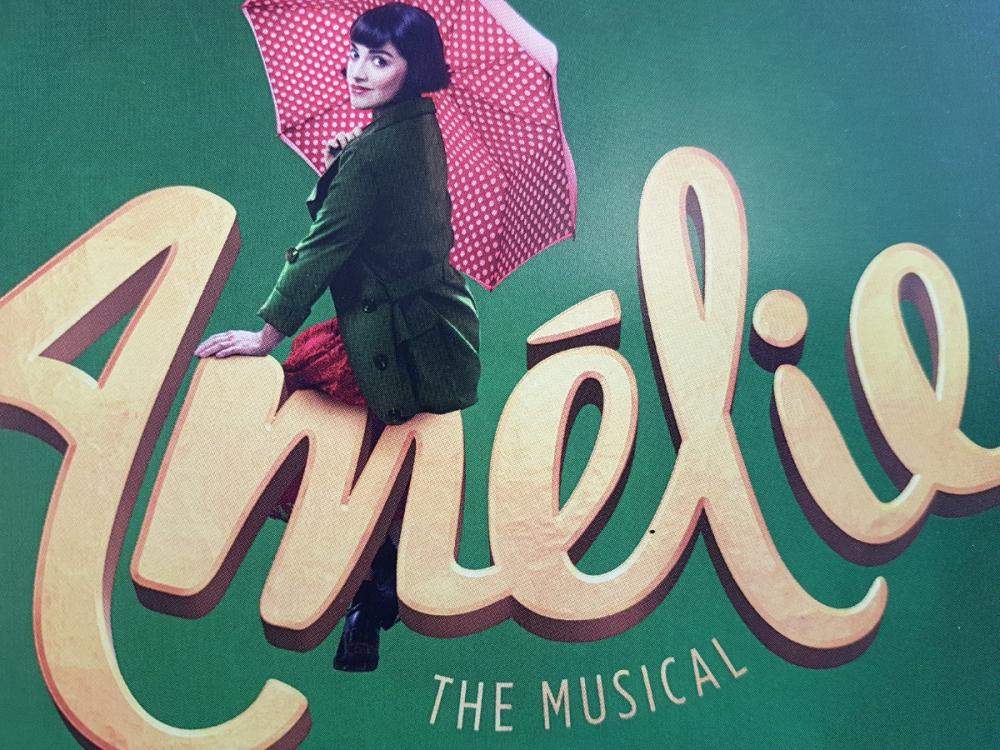 By helping others she comes to terms with her own issues and, in doing so, finds love, freedom and happy-ever-after fulfilment, leaving the audience on a wonderful high despite masks and social distancing!

We didn’t watch tv much that night but we did relax in the exquisitely green roof garden... 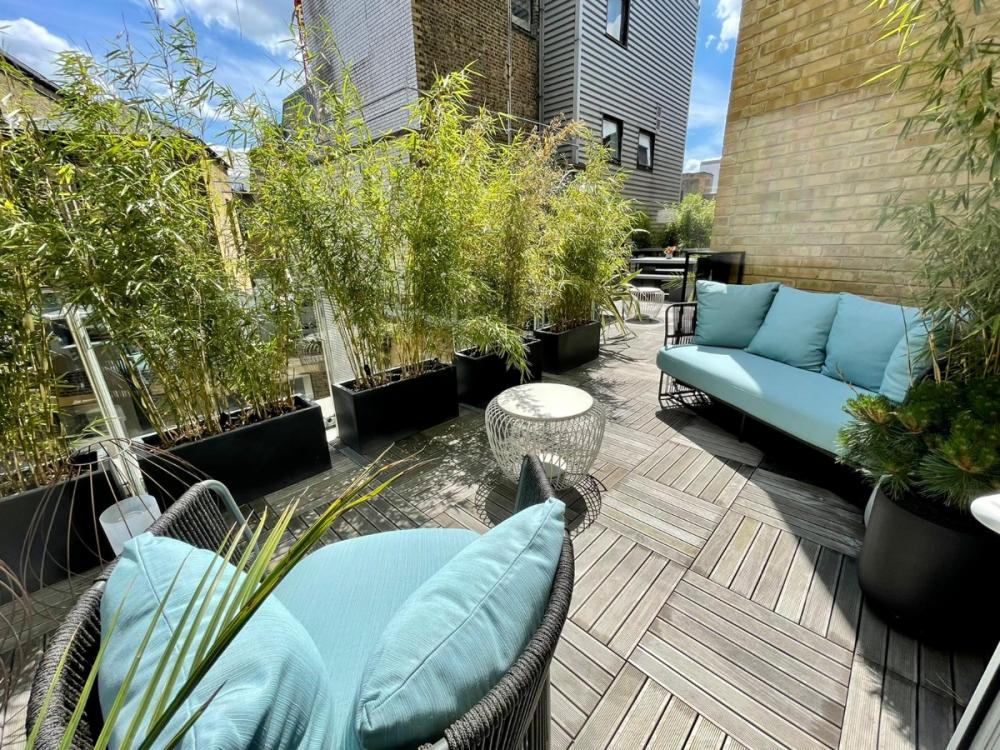 ...part of our suite, and later observed the ‘second’ screen emerge from the foot of our huge bed several times before dimming the lights and bidding farewell to a tiring day. 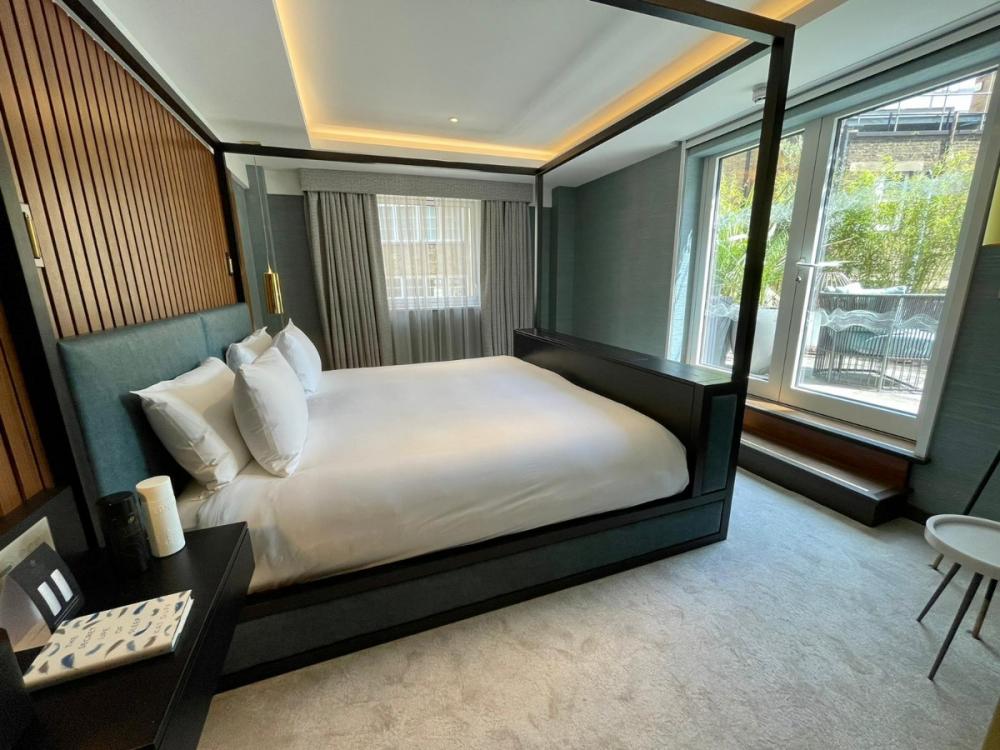 The breakfast granola was so good next morning that it formed the basis of a 10-minute conversation with our table host. One of the chefs had decided to make it herself from a personal recipe and it had proved so popular that they’d left it on the menu. 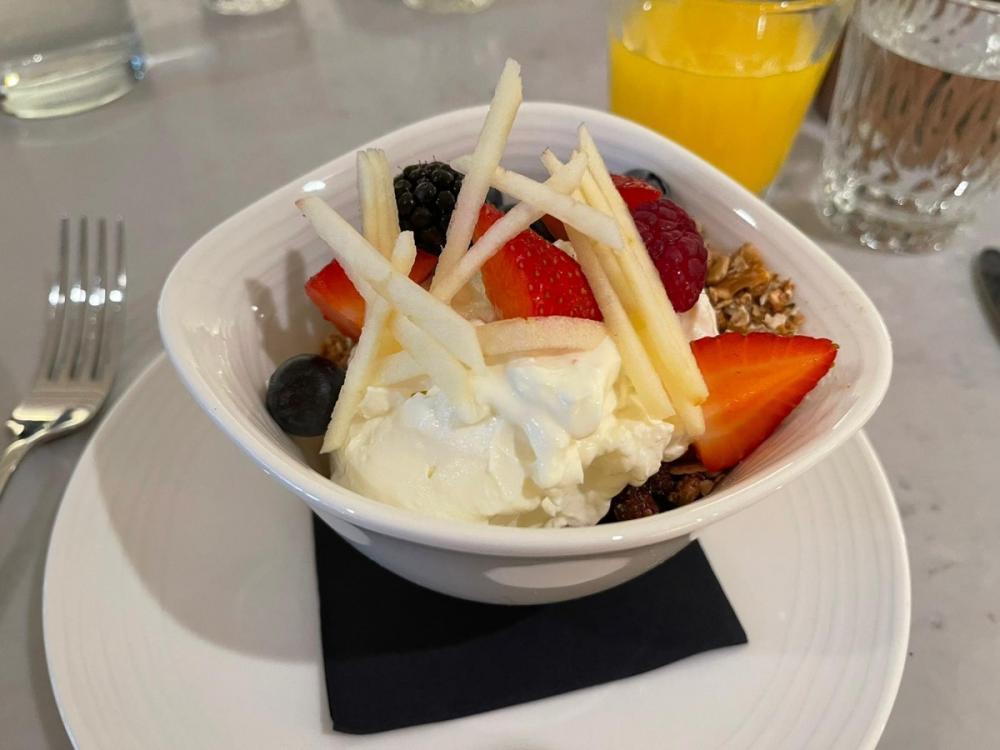 “The secret is to cover it in honey and bake eet for several minutes.”

My ear was failing with age but it was always fun to try!

“You said I sounded Italian when you first met me,” said my Manila born wife.

“No I didn’t” I replied emphatically, knowing full well that I was about to lose the debate. She insisted. I declined to respond. The gorgeous breakfast was eaten in contemplative silence and the calm surroundings enjoyed immensely. “Do you feel at all claustrophobic?” said Mrs Hopkins.

We were at the Postal Museum in Phoenix Place. Every visit starts with a 15-minute journey on the mini trains originally used to carry mail six miles across London. 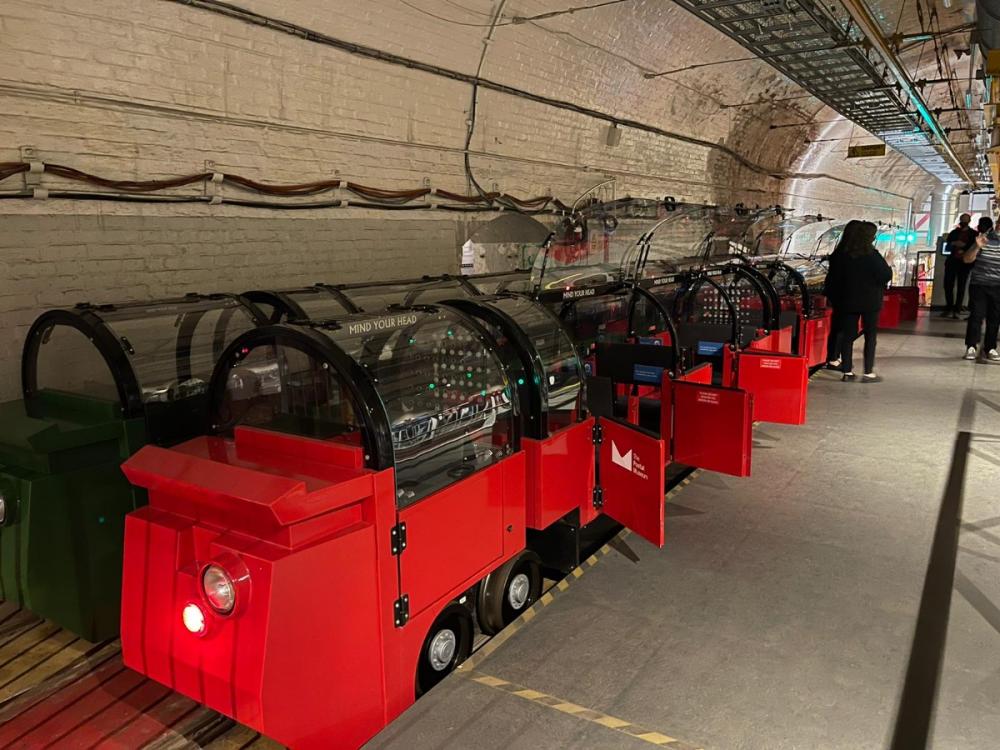 The west to east Mail Rail service ran for 76 years between 1927 and 2003 and this museum is now a brilliant testimony to a postal institution that was largely superseded by email and the technological revolution.

After your ‘trip’ you can visit the main museum in the building across the road and learn about other aspects of the Post Office’s service and origins. 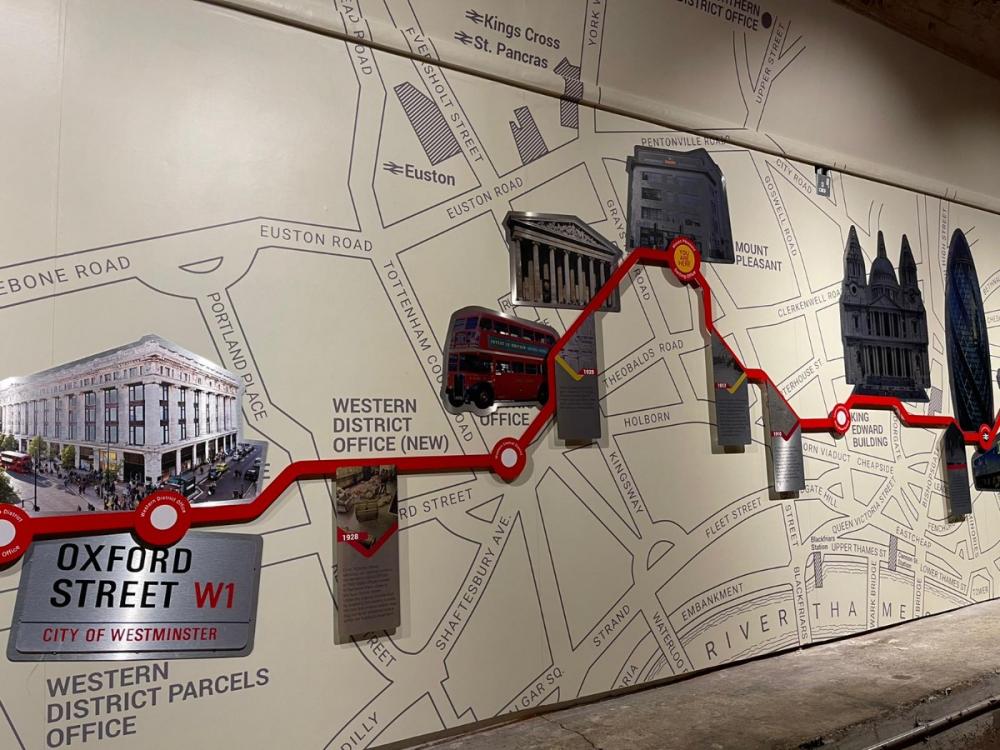 “If you stand at one side and whisper something, someone standing at the other side of the gallery can hear what you are saying.”

We couldn’t get into the Whispering Gallery at St Paul’s Cathedral that day, however, it didn’t lessen the enjoyment of Christopher Wren’s 17th century masterpiece, designed and built following the Great Fire of London in 1666. 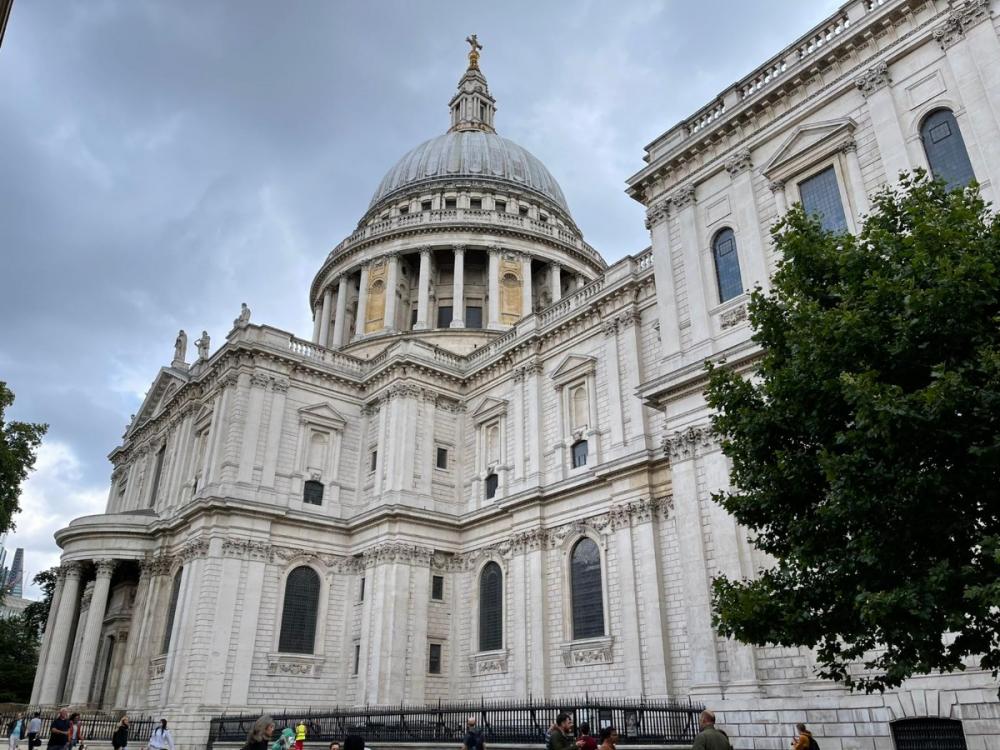 It is a truly magnificent structure where, at times, you stand amongst and feel almost part of history marvelling at the likes of Nelson and Wellington’s memorials 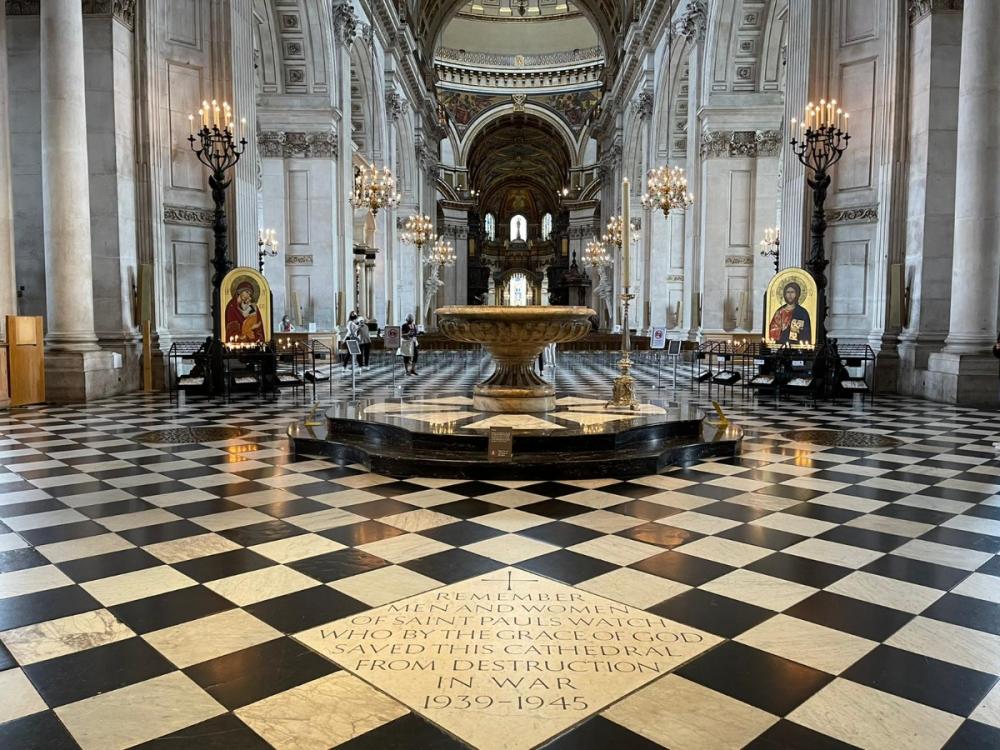 “You will be. We must have walked 12 miles today,” said Princess.

We were back at Middle Eight hotel, seated in the restaurant and waiting for our evening meal. This time the adjacent bar was buzzing with people... 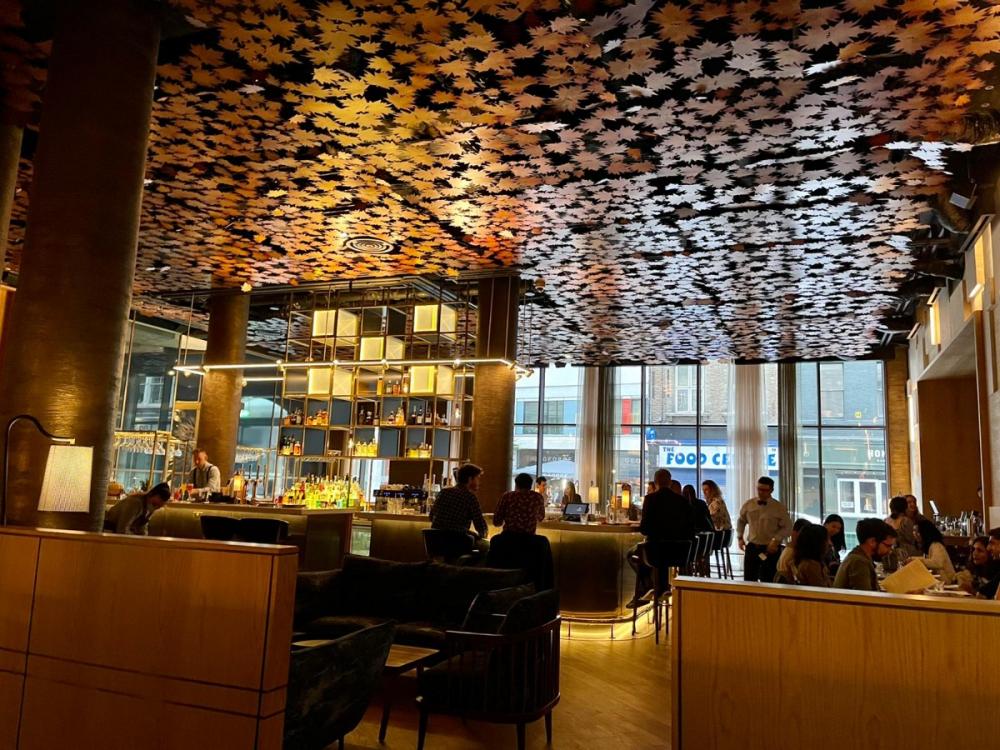 ... and Jamiroquai was pumping from the DJs decks: it was a perfect atmosphere and certainly true to the hotel’s promise to maintain space for performance.

On the ground floor the hotel smacks of luxurious modernism whilst sustainability - and all things musical - remain at the heart of Middle Eight. 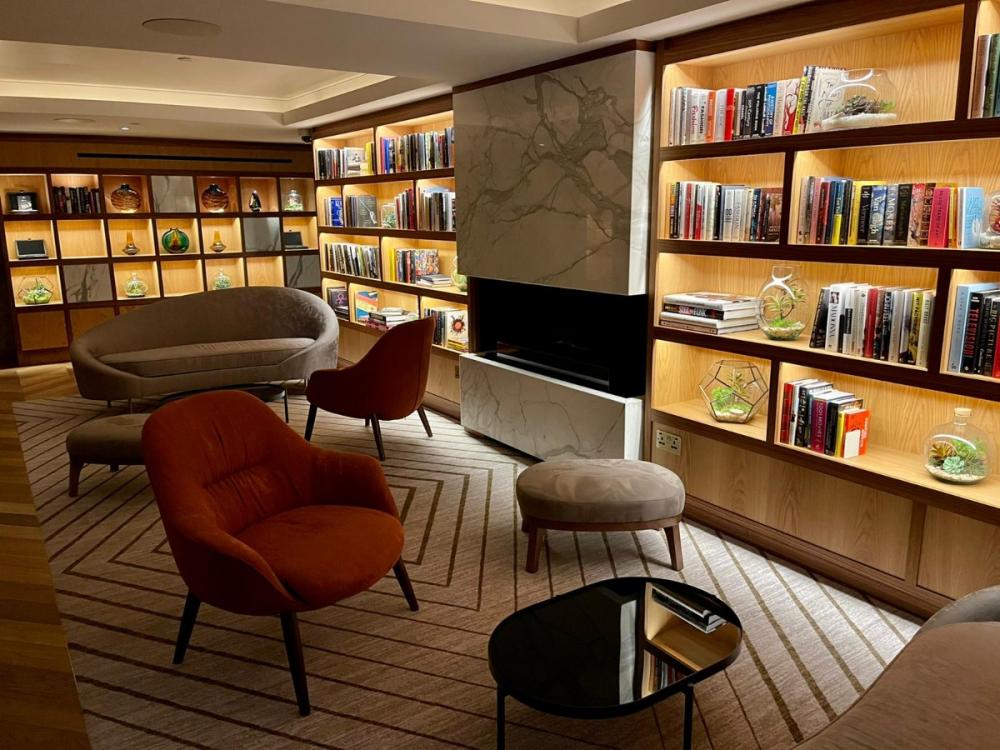 We’d already witnessed the absence of paper in our rooms but then there were the re fillable plastic water bottles at the bedside, wooden toothbrushes, and, wherever possible, minimal use of plastic. Somehow it felt calm.

There’s a lower ground floor gym, 180 rooms and 11 suites, some with vertical gardens, and it is a joy to see ‘plants’ in this warm, welcoming and thoughtfully planned out hotel which boasts four generous event spaces, chic design throughout and signature food that is tasty but unpretentious. 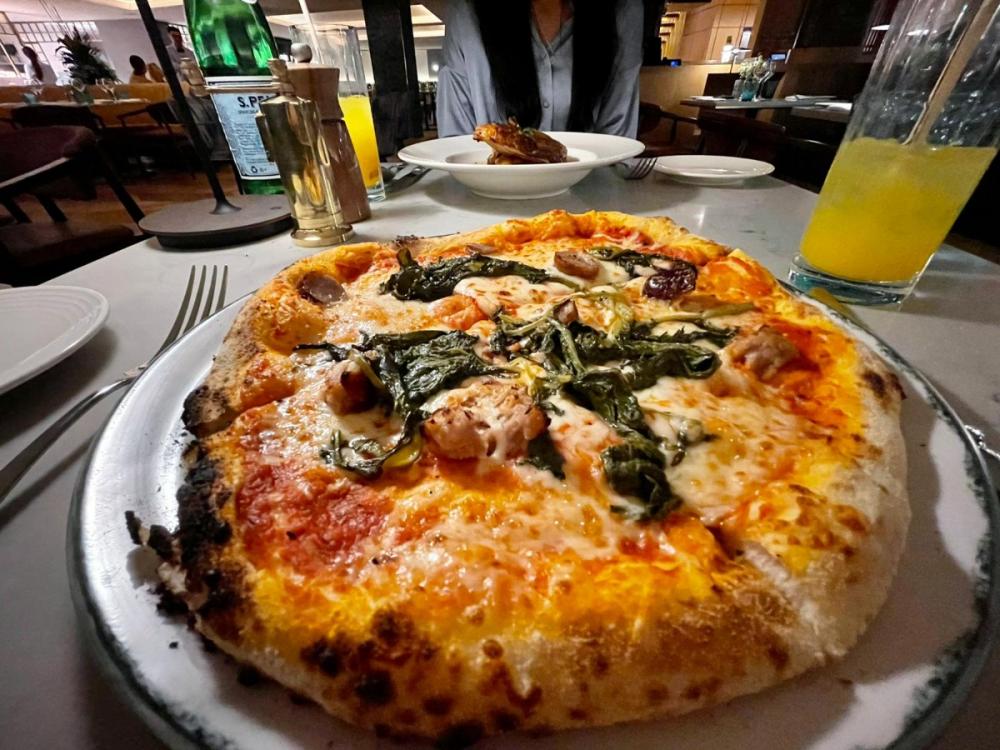 “Do you think it’s haunted?”

“Don’t be daft,” I said to Mrs H, knowing that Filipinos were inherently suspicious: at the end of the day they did have Azwang in Capiz Province, the Visayas equivalent of Dracula, and it wasn’t unheard of to be given a protective amulet at the regional airport.

“What made you say that?” I quizzed.

We retired to bed for our final evening at the Middle Eight. It had been an exhausting day but the surroundings were so relaxing and the bed so comfortable – and large - that sleeping was the least of our problems.

Fumbling with the electronic buttons to turn off the bedroom lights I felt sure I caught the reflection of a man with a long curly wig standing in the corner of my imagination: or was he in the room?

It was John Wesley, once ‘the best loved man in England’. I’d seen his portrait before. He had a glass in his hand. Clearly he approved. Someone was putting his building to good use and to prove the point, his glass of vino was fully charged!

Wesley was loved by the people. Somehow, I think the Middle Eight hotel will achieve an equally popular following. Cheers Mr Wesley and rest easy. Your church is in good hands!