The Mercedes Duo Dominate At Spa

With Mercedes having been victorious in all bar one of the six Grands Prix to date in this shortened season and with Lewis Hamilton having won four of them, the Formula 1 circus pitched camp at Belgium’s famous Spa Francorchamps circuit expecting more of the same and that is just what we experienced, with Hamilton leading team-mate Valtteri Bottas from start to finish. How next year’s budget cap and the 2022 new regulations are so needed to at least partially level the F1 playing field and increase inter-team competition. 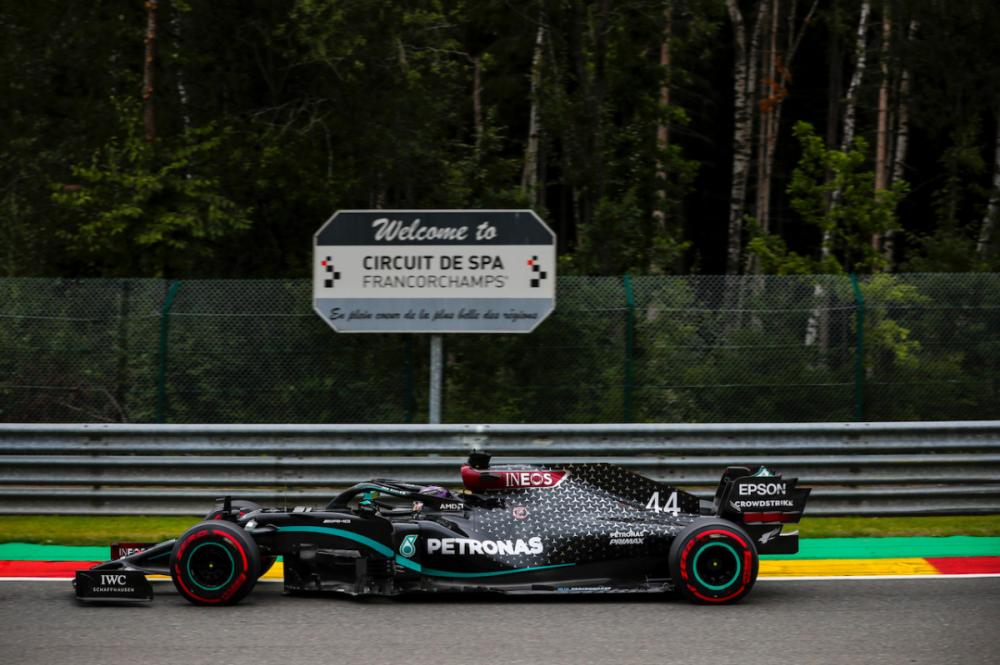 Lewis Hamilton easily extended his championship lead in Belgium
A week and a half before the Spa event there had been a major step forward as all ten current F1 teams committed to the sport’s new Concorde Agreement, which sets out the 2021 to 2025 relationship between the teams, the governing FIA and the owners Liberty Media, including the rules about prize money distribution. Ferrari will still receive a special additional allowance, if reduced in size, in recognition of the fact that the famous Italian outfit is the only team to have been in F1 continuously since it began back in 1950 and will retain its controversial right to veto any rule changes which it considers inappropriate.

There had also been an announcement from the iconic Williams Formula 1 team, revealing that it had been purchased by Dorilton Capital, a New York based private investment company. Being bottom in the Constructors championship had badly affected revenue streams and a partial or full new owner had been sought. Dorilton Capital indicated that a full review of the business was being undertaken, but that it intended to retain the Williams name and did not propose to relocate the operation from its longtime base in Grove, Oxfordshire.

Intrigue followed though when it became clear that Dorilton had transferred ownership of the team to a company called BCE Limited, these initials of course being those of former F1 supremo Bernard Charles Ecclestone. Deputy team principal Claire Williams, the daughter of Sir Frank Williams who founded the team with Sir Patrick Head back in 1977, quickly dismissed any link though, adding “This may be the end of an era for Williams as a family owned team, but the sale ensures its survival and most importantly will provide a path to success.“ 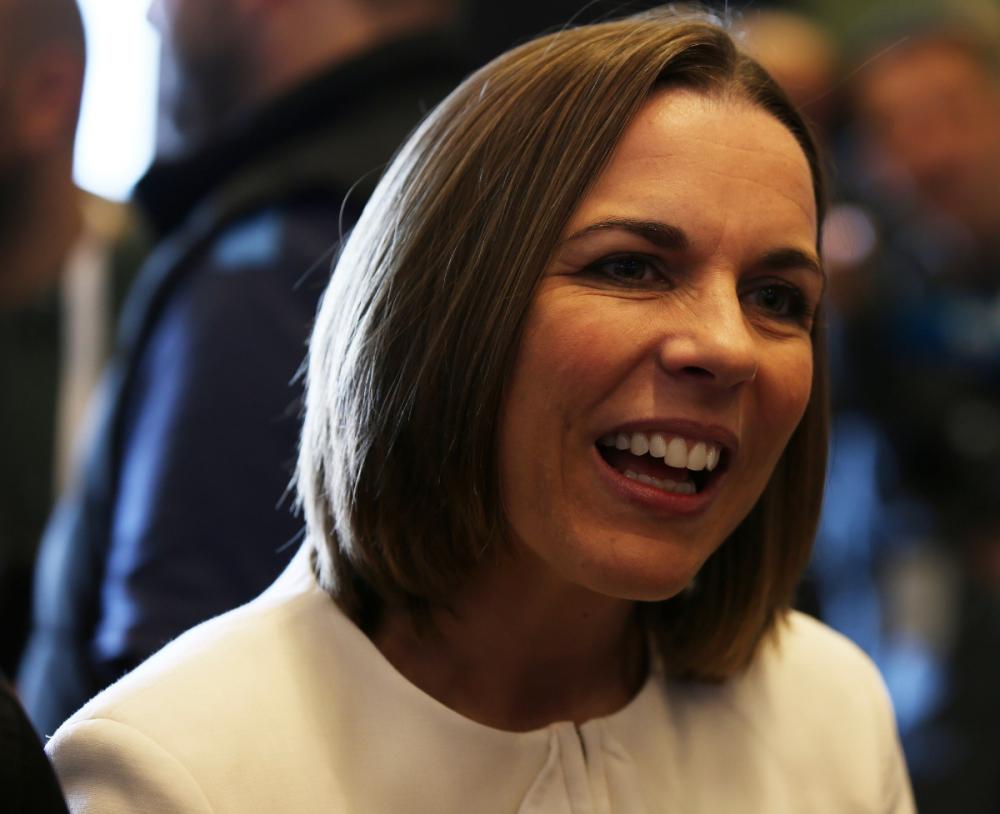 Claire Williams is optimistic about future success for her formerly family owned team
Despite all the safety improvements motorsport is still dangerous and Spa brought back sad memories for all of us about the loss of Formula 2 driver Anthoine Hubert at the Belgian circuit a year ago. The young Frenchman’s life ended in a violent accident during the F1 supporting F2 feature race when he was hit side-on at high speed at the exit of Raidillon corner. This made the 2020 return to the venue even harder for F1’s Charles Leclerc and Pierre Gasly who had long known Hubert well. Also present at Spa was Ecuadorian-American F2 driver Juan Manuel Correa who suffered severe lung and leg injuries in the same incident, but who is hopeful of a return to the championship next year. In a fitting tribute to Hubert, a minute’s silence was held on the grid before Saturday’s F2 race and then before the start of the following day’s Grand Prix.

On the Tuesday before Spa there had also been a key development regarding Racing Point’s major spat with Renault and Ferrari about the legality of its current car, which is very much based on last year’s double championship winning Mercedes design. Renault revealed that it was no longer intending to seek action against Racing Point at the FIA’s International Court of Appeal, having been satisfied that such blatant copying will no longer be allowed in future. This left Ferrari as Racing Point’s remaining legal protagonist, with the Italian outfit seeking further clarification as to what is and isn’t allowed.

There had also been rumours that an announcement might be made by Racing Point during the Spa weekend about Sebastian Vettel joinIng the team with effect from next year (when it will be renamed Aston Martin) and about which of the current incumbents might be retained to partner him - the financially very well backed Sergio Perez or Lance Stroll, the son of the main owner. Hamilton had offered support for his longtime rival Vettel, saying “I hope something really positive comes up for him for next year”, but in the end nothing was confirmed either way. There would be a certain irony if any such announcement were to be made at Ferrari’s home event in a week’s time. 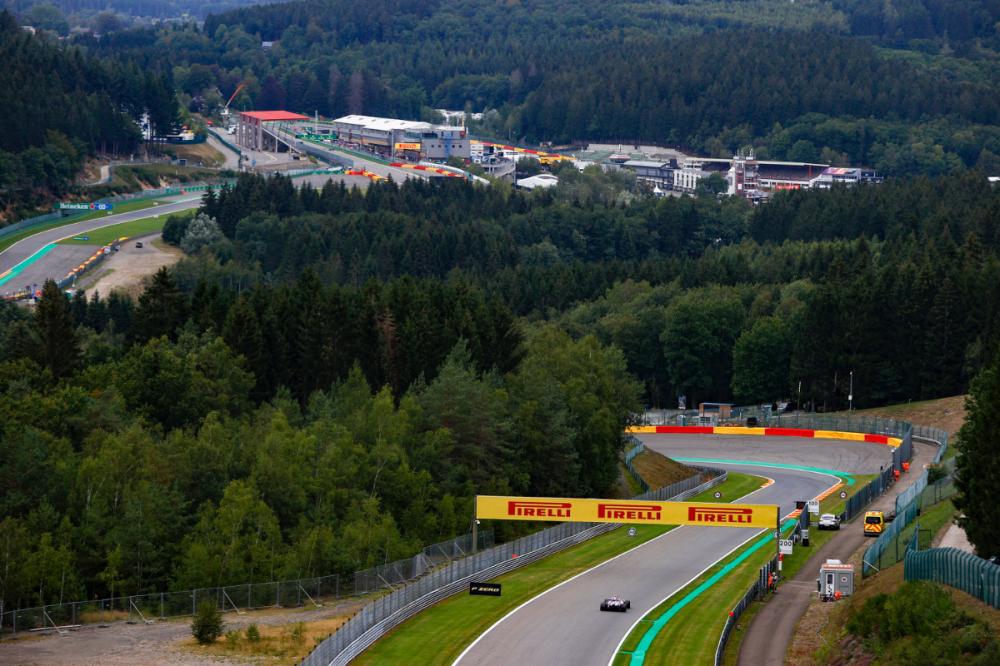 The famous Spa circuit is beautifully located amidst the forests of the Ardennes
On the technical front the introduction of the FIA’s proposed clampdown on the use of qualifying engine modes was delayed beyond Spa to the following race to allow the details to be better assessed and finalised. Also, on Thursday Hamilton had confirmed that he remained totally behind the BLM movement and “stood unified” with the various sporting stars who had withdrawn from events in the USA as a public protest against the recent Jacob Blake shooting. The championship leader refused however to consider boycotting the Spa event in a similar manner.

With everything that had been going on off-track it was a welcome relief to actually see the cars head out onto the circuit for Friday morning’s opening free practice session, but it was no surprise to see the Mercedes flying machines of Bottas and Hamilton renew their habit of topping the timesheets again. As expected, Red Bull’s Max Verstappen was the best of the rest, almost half a second faster than his under pressure sixth placed team-mate Alex Albon. Being paired with Verstappen really has to be the toughest job in F1! Racing Point’s two “pink Mercedes” cars were just behind the Dutch charger, whilst the Ferrari’s of Leclerc and Vettel were way off the pace, only 14th and 15th quickest out of the 20 contenders.

Come the afternoon’s second practice period Verstappen and Renault’s Daniel Ricciardo went quickest, but there was a suspicion the Mercedes cars had turned their engines down and in Saturday’s last practice opportunity Hamilton was again on top.

The Spa circuit is steeped in motor racing history and is brilliant to drive round (as I know from personal experience), but it readily highlights any weakness in a car’s performance, be it power, chassis or aerodynamics related. Come Saturday afternoon’s qualifying hour both Mercedes were running plenty of downforce, possibly in anticipation of rain the following day, but Hamilton and Bottas still claimed the front row on the grid again, with the former setting a new track record. Verstappen extracted all he could from his Red Bull though and was only one hundredth of a second slower than Bottas, with Ricciardo fourth in a Renault almost devoid of downforce. It was another grim performance from Ferrari though, with its drivers languishing back on the seventh row. What a downturn from the same race last year when they locked out the front row and Leclerc went on to win. 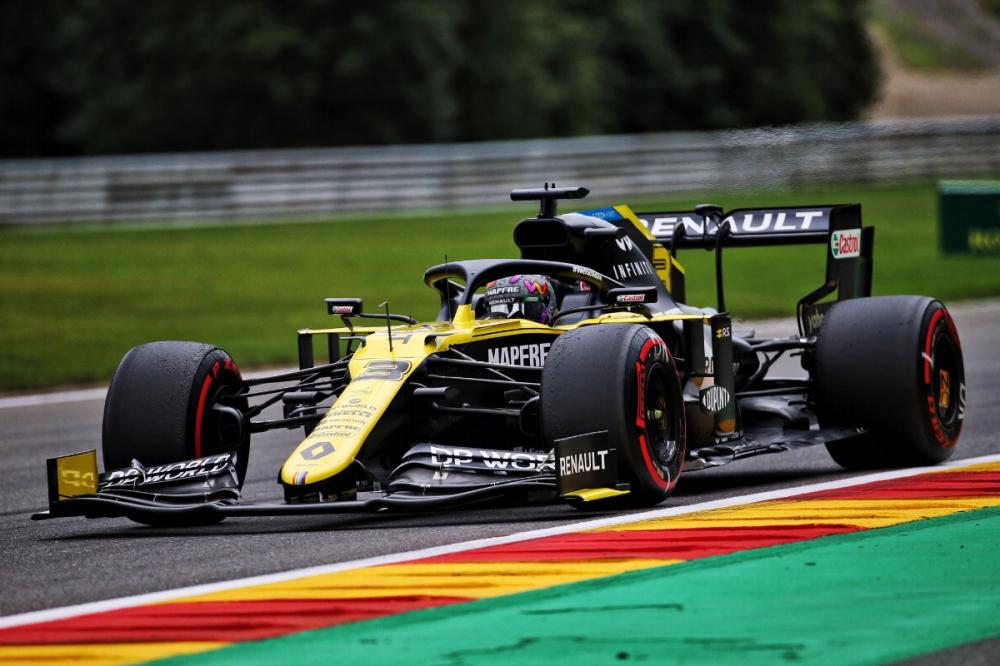 Renault’s Daniel Ricciardo was to just miss the podium, but set the fastest lap of the race
As the race start approached the track conditions were dry and sunny, with any rain staying away, but there was drama as the cars headed to the grid when Carlos Sainz’s McLaren suffered an exhaust related failure. This meant the Spaniard was sadly out of the race before it had even begun.

There was the usual mixed response amongst the drivers to the pre-race taking of a knee and, when the red lights went out at the start of the Grand Prix, the pack made the short sprint to the opening La Source hairpin which has often witnessed carnage over the years. Today we had a clean start though and Hamilton led from Bottas, Verstappen, Ricciardo, Esteban Ocon and Albon.


Also by Graham Read...
﻿Hamilton Holds Off Verstappen In A Bahraini ThrillerR.I.P. Johnny Dumfries, The 7th Marquess Of Bute 1958-2021﻿R.I.P. Peter Lorimer 1946-2021R.I.P. Sabine Schmitz 1969-2021 “The Queen Of The Nürburgring”﻿Red Bull’s Verstappen Fastest In F1 Testing
The Spa track may be superb, but to be brutally honest this Grand Prix was hardly one of the sport’s finest as the same six drivers reached the chequered flag 44 laps later in the very same order. Yes, along the way there was some swapping of positions behind the leading trio, with DRS assisted passes along the Kemmel straight prevalent, but as early as lap six we had a clear indication of what was to follow as Mercedes told Bottas over the radio that he could not alter his engine mode in an attempt to lose the gap to the leading Hamilton. The Finn understandably wasn’t impressed, but being a true team player he duly did as he was told.

The race was interrupted by the appearance of the safety car on the eleventh tour when Antonio Giovinazzi had a hefty shunt exiting the Fagnes chicane in his Alfa Romeo and Williams’ unlucky George Russell had to take urgent avoiding action into the barriers as he sought to escape a major impact with an errant wheel from the Italian’s car. A flurry of pit stops ensued before racing resumed at the start of lap 15. Tyre management became crucial in the closing stages, but on the very last lap Ocon still managed to pass Albon for fifth and his Renault team-mate earned the extra point for setting the fastest lap of the race.

So, Hamilton, Bottas and Verstappen were the podium finishers and the less said about Ferrari the better as both its cars ended up out of the points, with Vettel a lowly thirteenth, one place ahead of Leclerc and with only three other drivers behind them. Much work is needed down Maranello way, but the answers to their clear lack of pace may well take some time. 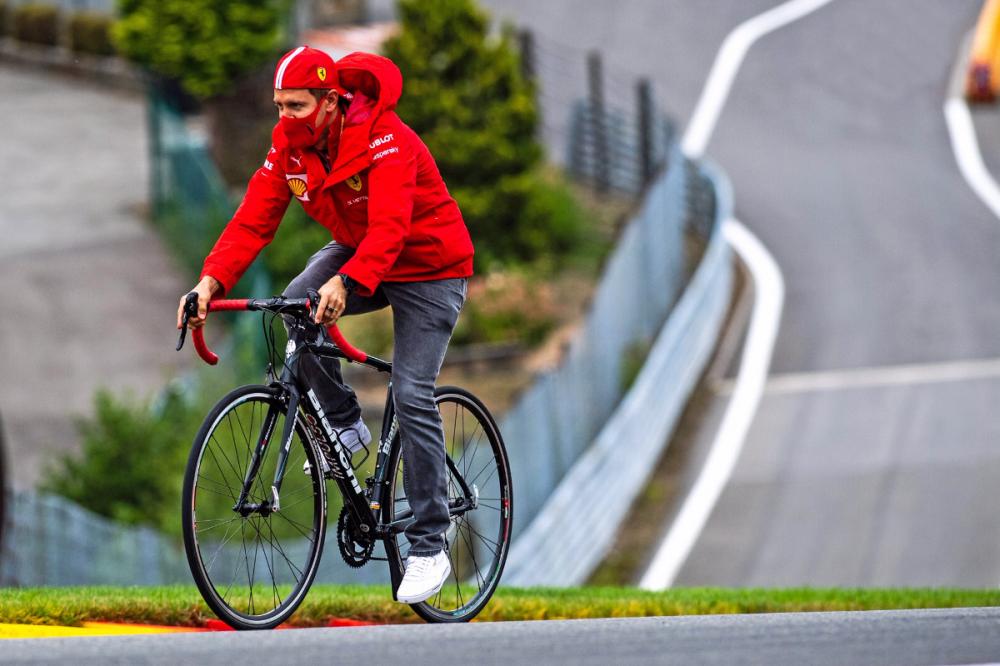 Seb Vettel must have felt his bike was almost as fast as his Ferrari at Spa!
Worryingly for Ferrari, next up comes their home Grand Prix at another of motorsport’s truly iconic circuits as in just a few days’ time the sweeps and undulations of the Ardennes track will be replaced by the flat out blast known as Monza, situated near Milan. Will anyone be able to challenge Mercedes at Formula 1’s fastest venue? Over the years Ferrari has always seemed to find a little extra pace when competing on home soil, but this year will be very challenging for both the team and their passionate fans, the tifosi, as again power and an abundance of it is crucial to success at the “temple of speed”.