There have been some shocking recent scenes, with an unruly mob of extremist right wingers forcing their way into the seat of government, making an assault on democracy, creating chaos and sowing discord and division. But enough about the Tories – have you seen what’s been happening in the USA? After Donald Trump succeeded in inciting a riot, it’s going to take more than an injection of disinfectant to sanitise his reputation; the case for imbleachment is stronger than ever. Trump defended himself a few days later, channelling his inner Keanu Reeves to comment that “People thought what I said was totally appropriate”. I expect he’s been watching Keanu in Point Break, in which the actor was, purely coincidentally, the leader of a group of criminals that were known as the Ex-Presidents. 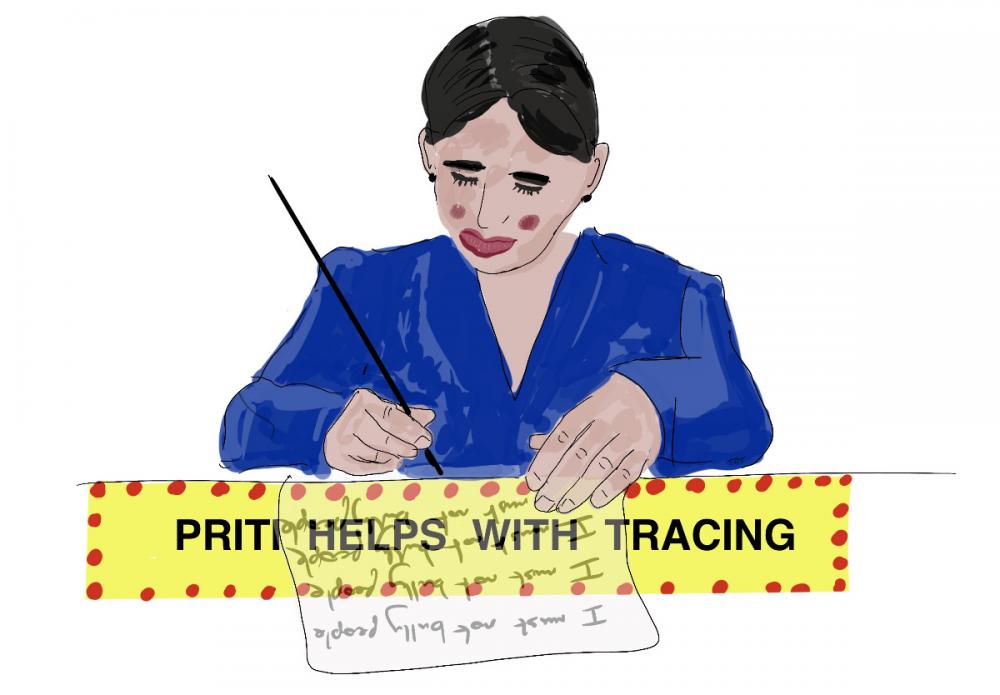 Back in Britain, we’ve gone for a new lockdown sooner than expected. Lockdown III (brought to you by Pfizer, makers of vaccines and Viagra) is anticipated to be longer and harder. And with the return of lockdown, we’ve also been treated to the return of regular press conferences. Even Priti Patel has finally been allowed back out of her crypt to take one of the press conferences from Downin’ Street. With Patel flanked by a police federation representative to deflect any difficult questions, the probing by the press put me in mind of Line of Duty, as the home secretary tried to orchestrate the cover-up of crimes against the British people and sought to pin the blame for the latest record Covid death rates onto others. “A minority of people are putting the public’s health at risk,” she said. That’s true. I believe that would be the cabinet.

There would have been no point reading her her rights - “Anything you do say may be given in evidence” – since anything she does say sounds like random words stuck together, the content completely divorced from the tone in which she says it. It’s like a five-year old being asked to read aloud in class for the first time. I wonder if someone ought to tell her that “vaccine” isn’t a verb. Just a few days earlier, she had been on the radio to tell us that she believes in “freedom of liberty”, which sounds nice.

Sadly, no-one from AC-12 – sorry, the press – asked her about the mysterious figure believed to lead a shadowy organisation known as “Test and Trace”. The existence of this individual, known as “H” – rumoured to stand for Harding – is a matter of dispute, since there have been no known sightings in recent months. Perhaps if we could get “H” on the vaccination priority list, Bill Gates could then use his nano-chips to let us know where she is?

It’s odd that we haven’t heard very much recently about Test and Trace, since last summer it was deemed to be “essential” in getting us through the pandemic. Still, it’s only cost us £22bn so far, £3bn of which is lost, completely unaccounted for. No wonder Dido Harding isn’t showing her face. Boris Johnson may look like he’s been dragged backwards through a hedge, but with the way huge swathes of public money are being funnelled to Tory donors, the whole Conservative party looks like it’s been dragged backwards through a hedge-fund.

For all the other countries that are successfully managing Covid, they have a functioning system of Test, Isolate, Trace and Support. It’s strange the government is struggling with this – they don’t normally have any trouble making TITS of themselves.

The government also managed to make a dog’s breakfast – or, at least, a child’s lunch that’s been corporately sourced – of the return to school after Christmas, insisting they were safe and sending children back for one day, before promptly closing them again. Gavin Williamson, the Education Secretary whose career path offers hope – and incredulity – to us all, had first insisted that schools must open because missing school would harm the life chances of poorer children. I think the Tories are managing that one quite well already, what with voting against them having free school meals. He then threatened to take legal action against schools that did not open, before immediately closing them himself after a single day. Honestly, it’s like educational hokey-cokey – in, out, in out. A government spokesperson sought to reassure us, saying that Williamson was doing his job “to his utmost ability” which, while true, is not necessarily reassuring. It’s akin to those ambiguous job references that say things like, “I have never worked with anyone like him. I cannot recommend him enough. Literally no-one would be better at his job.”


Also by Roger Winterbottom...
Triumph Of The SwillRun With The FoxHonesty Is One Of A Range Of OptionsWill Johnson The Pleasure Bot Have a Premature Relaxation?Operation Close Stable Door
As lockdown began once again, the Daily Mail ran the headline “Boris: you must stay at home”. Unfortunately, Johnson didn’t listen to them. Travelling seven miles so that he could exercise (sadly, not his judgement), while others were being fined by the police for less, made him about as popular a cyclist as Lance Armstrong. Priti Patel explained it all away at the press conference. “Exercise is important. It’s important to people’s health and well-being. And that equally applies to exercise.” Er, thanks. Exercise means exercise, just like Brexit means Brexit.

Brexit is of course already paying dividends, with UK lorry drivers having their ham and cheese sandwiches confiscated at the borders. Still, with free school lunches apparently comprising half a red pepper and a teenth of tuna, perhaps we could requisition the confiscated sandwiches to help the catering companies top up? After all, it’s not too long ago that Tory MPs were saying that if you gave vouchers to free school meal recipients, then money would end up in the hands of brothels and crack dens. Much better to let your mates in the private sector cream it off instead!

And much as I enjoy the regular debates about whether children really need to eat, they are becoming rather repetitive. I see we’re already lining up for another one, with the government issuing orders to schools not to provide any meals over half-term. Come on, guys: you already know Marcus Rashford is going to make you do another U-turn. Might as well just do it now and get the embarrassment over with.