‘The Heart Of Most Murders is …’ : The Heron’s Cry By Ann Cleeves

By George, I needed something a bit less maudlin given my recent assortment of reading matter, so the prospect of a new murder mystery was just the job, and there being only three deaths, it seemed positively lighthearted!

I like Ann Cleeves’ books and was keen to meet her latest detective. This is the second Matthew Venn novel and it was purely by chance that The Last Call was on TV at the same time – not necessarily a good thing since my impression of the main characters was skewed by their portrayal on the small screen. Which is not to criticise either medium, but to accept the differences which will always obtain as a result of abridgement and actorly interpretation.

Matthew Venn is a highly regarded police inspector in North Devon who nevertheless still suffers, at times, from a lack of confidence. He is logical and orderly, and rarely reveals his feelings. He is happily married to his husband, the more spontaneous and warm-hearted Jonathan. At work, he leads a team, each member of which seems to have issues of their own.

I like the personal touches Cleeves adds. She is good at crafting a diverse range of characters, making them rounded individuals with backgrounds and home lives which distract them on occasions from the case in hand. Venn’s childhood was not a happy, carefree time and he now has a difficult relationship with his mother. He senses her disapproval of his lifestyle and she hasn’t forgiven him for walking away from the Barum Brethren, amongst whom he was brought up. DS Jen Rafferty drinks a little too much and, having escaped an abusive marriage, lives with her two teenage offspring who accept her quirks and respect her job. DC Ross May is an ambitious young man with little empathy for others. Blind to what’s going on at home, he can sense a problem but can’t identify it, let alone deal with it. 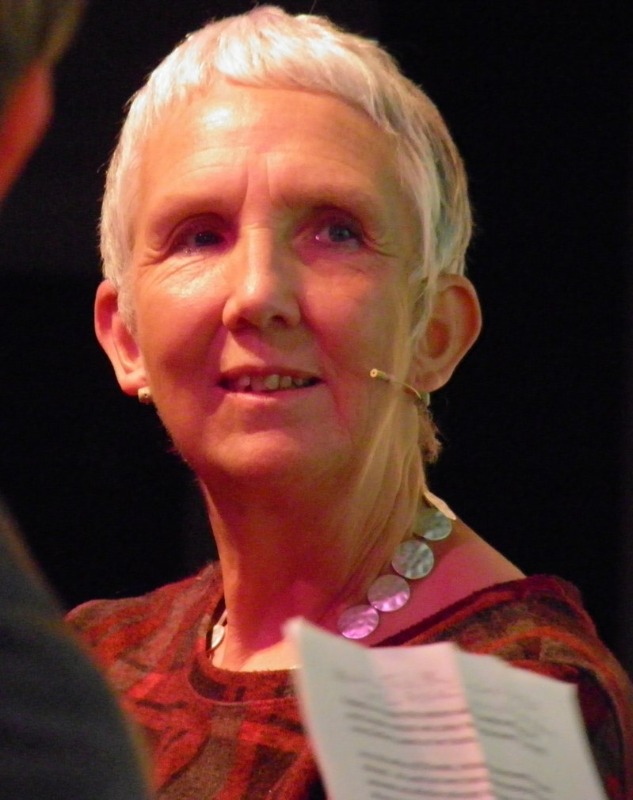 Ann Cleeves
These three protagonists are called to investigate a murder. A local man has been stabbed in the neck with a piece of glass. His daughter is a glassmaker and the body is found in a pool of blood, in her studio. Things are complicated because both Jen and Venn know some of the people involved and are all part of the same close-knit community. In fact, Jen was at the same party as the murder victim the previous evening and he had tried to speak to her when she was in no fit state to respond properly. He left with her phone number and a promise to contact her soon. Venn’s husband knows the victim’s daughter and wants to take care of her but as a potential suspect, Venn cannot allow it.

Investigations reveal that the victim was generally well thought of and had, as part of his job with ‘North Devon Patients Together’, been looking into local mental health provision, in particular the support – or lack of it – which had been given to a young man who had recently committed suicide. Cleeves deals sensitively with this delicate subject which becomes central to the plot. When a second murder with the same characteristics takes place, the local residents come under even closer scrutiny. The coastal community in North Devon provides an insular, small town atmosphere and the reader is allowed to share some of the secrets lurking beneath the surface.

Character driven, this novel is a slow burn as the team does the leg work and follows legal procedure; the list of suspicion grows by the minute. The pace picks up considerably towards the end when Rafferty and Venn have resolved the case and race against the clock to avoid another murder. They take the reader with them but don’t share their thoughts, allowing the former to enjoy a more prolonged denouement.


Also by Artis-Ann ...
Senoy, Sansenoy And Semangelof: When I Close My Eyes By Jemma WaynePerhaps, Perhaps, Perhaps: The Christie Affair By Nina De GramontKeep Digging: The Night She Disappeared by Lisa JewellScarred, Possibly Scared: Prague Spring By Simon MawerSaying One Thing, Thinking Another: The Undiscovered Deaths Of Grace McGill By C. S. Robertson
Cleeves touches on the relationship between parents and children in this novel: caring for the elderly and being aware of the activities of the young. Guilt is a theme which is repeated throughout: guilt relating to the past, guilt about what was done and what was not done. No one wants to suspect friends or relatives of friends in the search for the truth, but ultimately all is revealed, and the cast of leading characters can go home. Oh, and the reader will be delighted that one suspect, who turns out not to be guilty of murder, is punished anyway for the part he plays in the torment of others. Justice, in one form or another, is served.


The Heron’s Cry is published by Pan Macmillan