The English Way – Simply The Best! 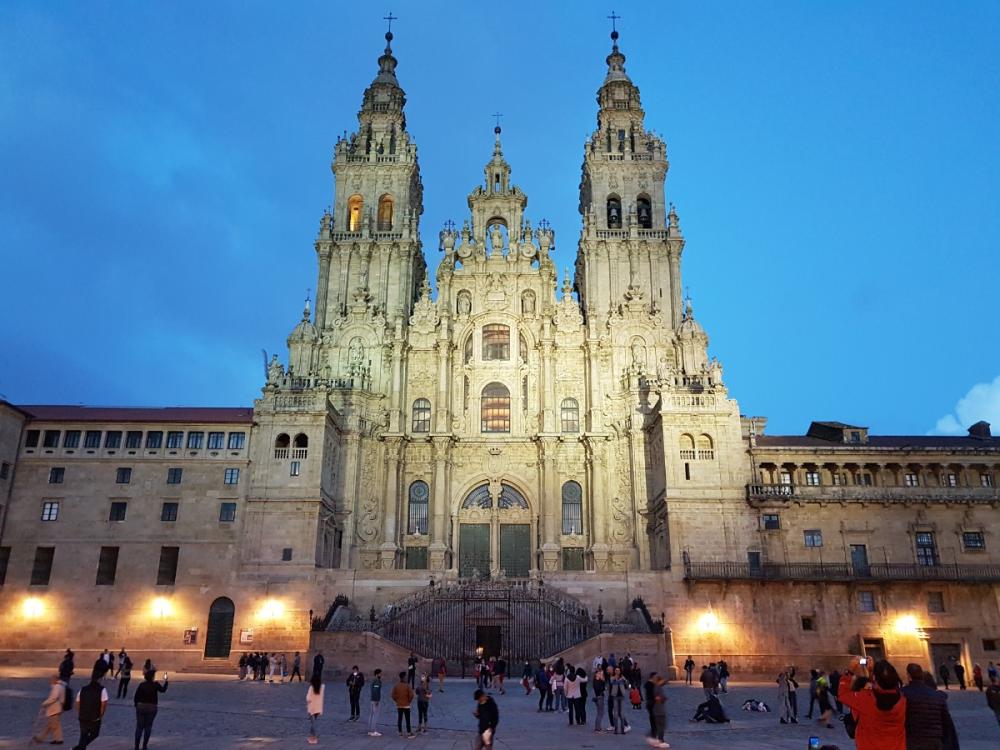 If completing the National Three Peaks Challenge involved doing your final Will and Testament before taking one step, it might make you think twice before lacing up those walking boots!

But hundreds of years ago that’s exactly what medieval pilgrims did before embarking on that most famous of trails, The Camino Way, in which all roads lead to Spain’s Santiago De Compostela, such were the dangers and life-threatening situations many encountered en route.

So, given the chance to learn about The English Way – one of the many Camino routes that lead to this ancient and wonderful city in Spain’s north western region of Galicia – it was an opportunity not to be missed, even if I was to be ferried around in style and returned home without that most desirous of prizes, the coveted ‘Compostela’! 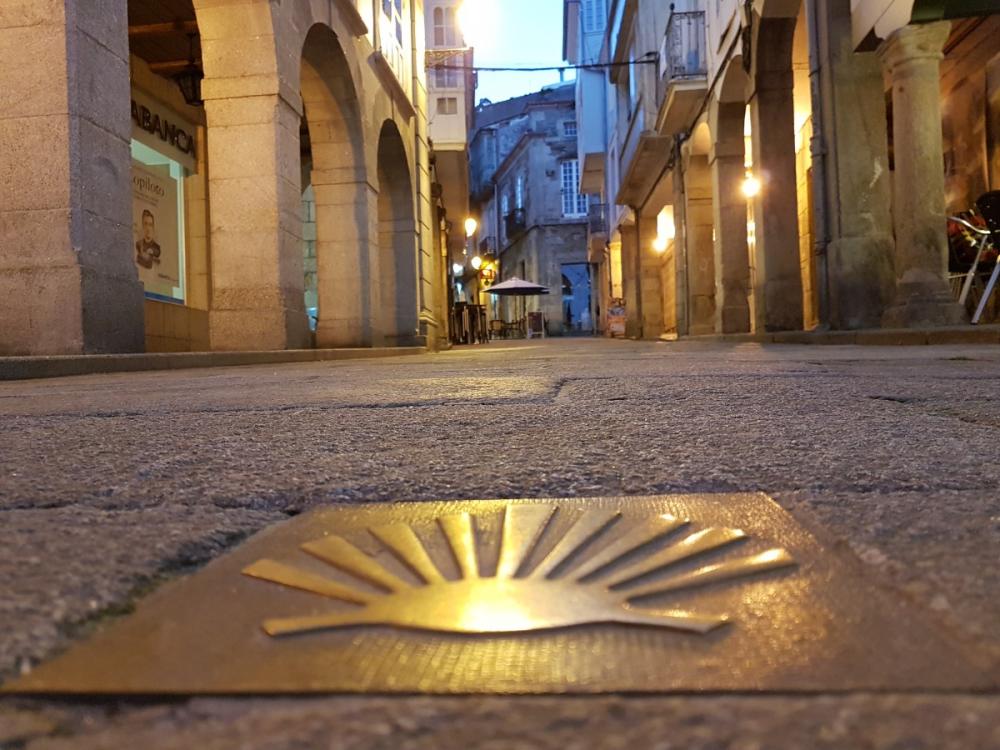 Contrary to popular myth, this is no longer simply a walk for ‘Catholics’ but, these days, is seen as both a religious and a ‘spiritual’ journey, with either reason being given by pilgrims for their successful completion of any official route, in return for a Compostela, a certificate in Latin script that confirms completion of a 100km journey, by foot, evidenced by a series of stamps acquired at various points along the way.
I was a little flustered as I exited customs at Santiago De Compostela having misread the clock at Palma airport and almost missed my connection.

But my guide for the next few days, Richard, soon had me calmed as we waited for my fellow traveller and journalist, Sister Janet, a nun who I was later to discover had a wonderful sense of humour, a now thinning Scouse accent and strong connections to Yorkshire: the scene was set for an interesting journey!

Most of the Caminos de Santiago are by land but, having to cross by sea did not deter pilgrims who, from the 11th Century, sailed from the ports of southern England in their thousands, heading for land closer to Santiago de Compostela, A Coruña being the most popular one, Galicia’s second city with a population of around 280,000. 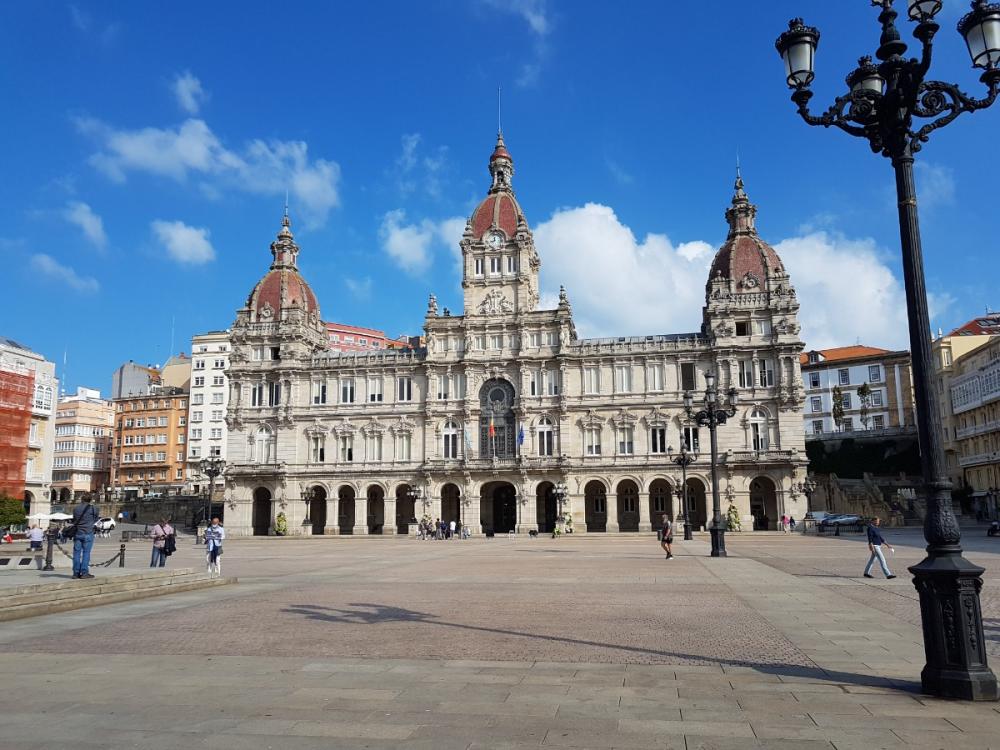 So, it was appropriate that our journey was to begin there... 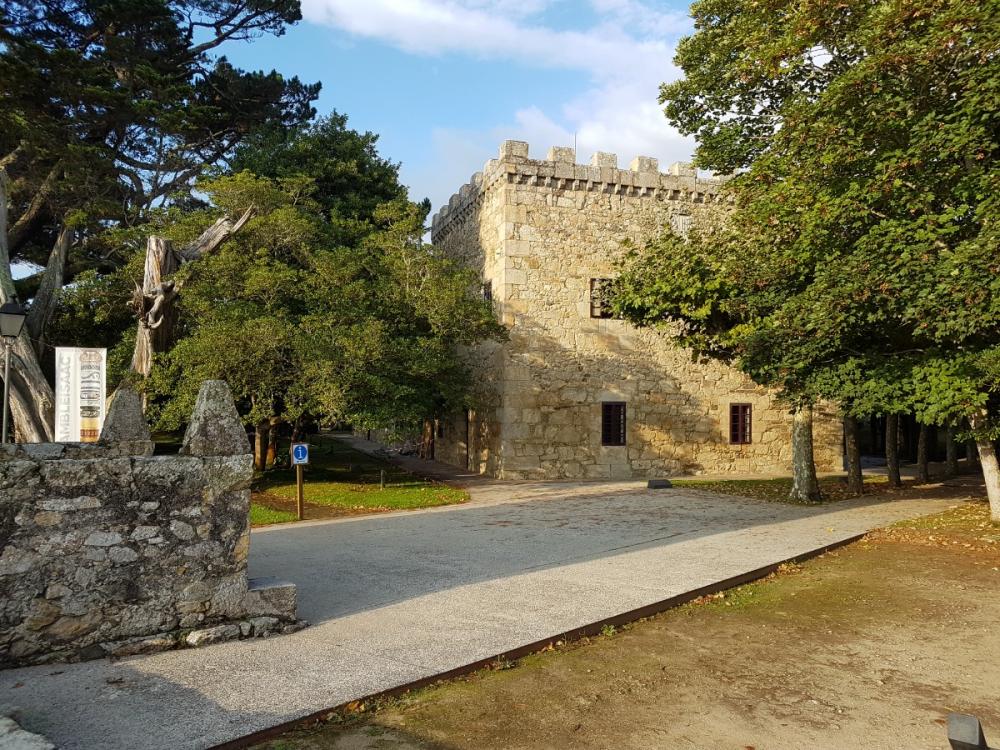 ...even if it was in the comfort of the NOA Hotel in Oleiros, a small municipality close to the main city, but far enough away to have its own identity and an idyllic location just across from the Island of Santa Cruz with its mock 19th century castle.

The English Way, with its varying start points, namely Ferrol or A Coruña – only the former will give you the mandatory 100km required for those seeking a Compostela - is one of the oldest pilgrimage routes across the Province. It was used by the British, Scots and the Irish during the Middle Ages and, until fairly recently, was one of the forgotten routes compared to more popular and longer alternatives, such as the French Way.

Now, however, provincial authorities in Galicia have committed themselves to the recovery and promotion of this historical route which, theoretically starts at Finchale Priory in the North East of England. In 2016 a group of people from Durham city organised the first pilgrimage in half a millennium and, in early 2017, formed the Association of the Friends of the Finchale Camino
The former provincial capital of A Coruña is a fascinating city in its own right with its Roman Tower of Hercules, the oldest extant lighthouse in existence, the tomb of Sir John Moore, a British soldier who died during one of the great battles of the War of Independence... 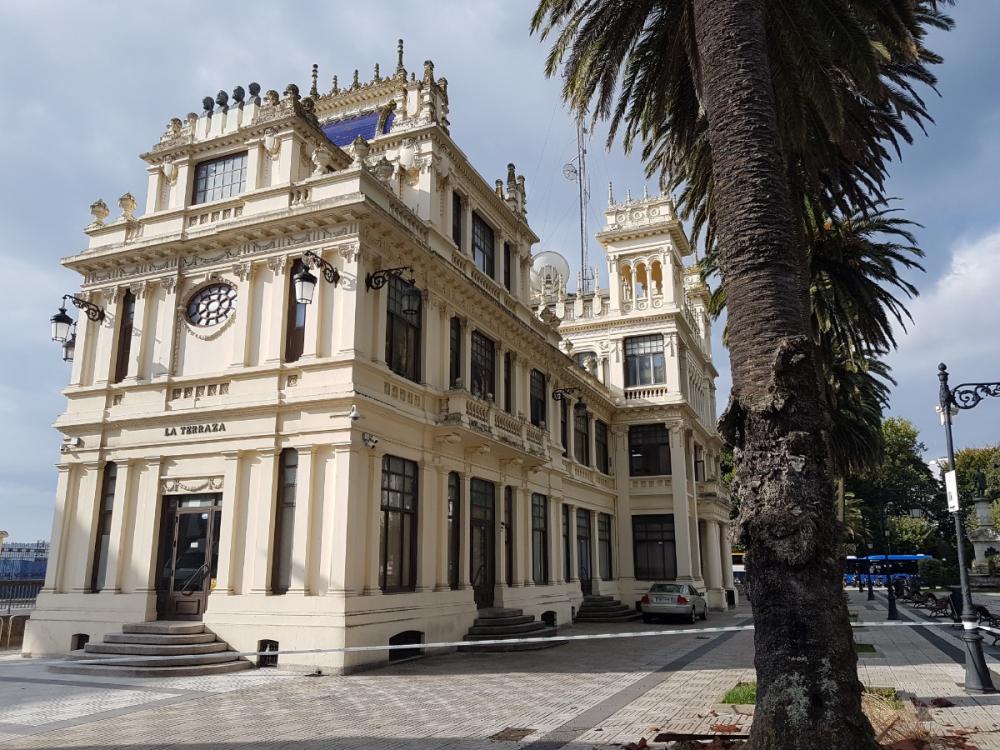 ...and the Liberty architecture of the Gardens of Mendez – home to the statue of Condesa De Emilia Pardo Bazan, a powerful, intelligent woman from the early 20th century, not unknown for her liberated ways and penchant for young Spanish men! 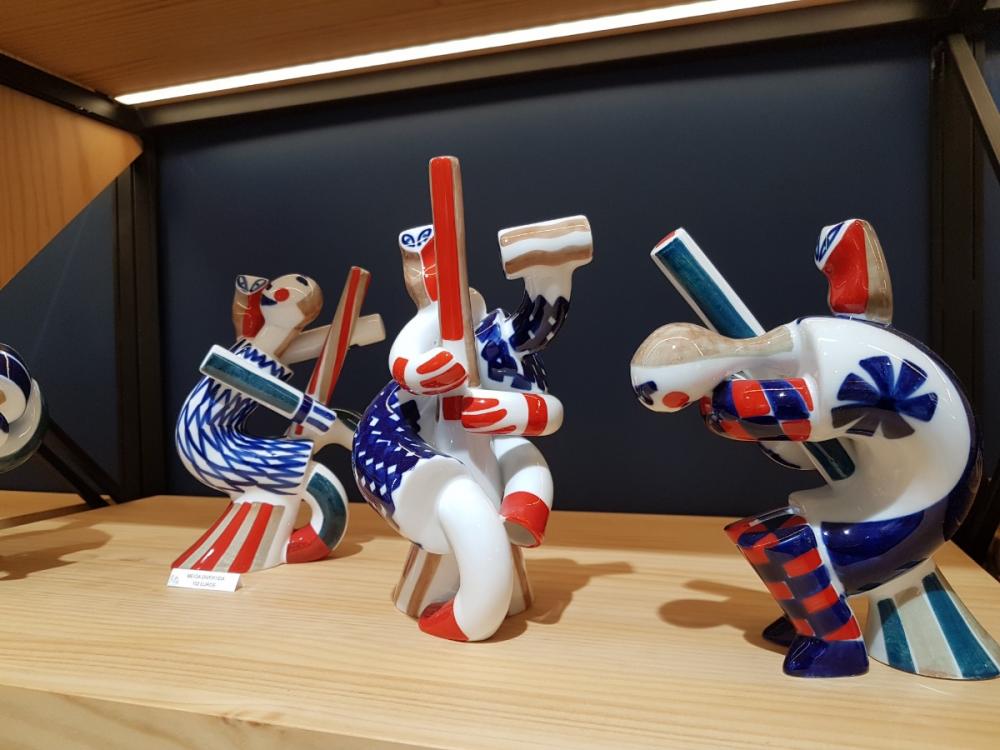 ... and the stunning Baroque influenced town hall to one side, perhaps the most important place in A Coruña is the Gothic Church of St James, starting point of the English Way’s shorter 72km hike to Santiago De Compostela.

James is consistently portrayed as his own version of the Trinity: James the apostle, Spain’s patron saint or simply symbolic slayer of the Moors, seen at one point in history as the antithesis of Christianity. 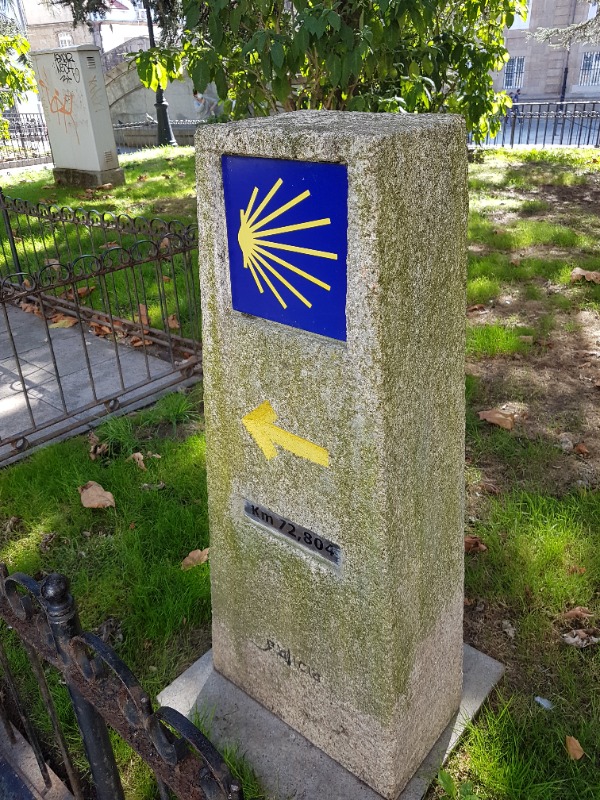 But those determined to get the Compostela usually make their way to Ferrol, which guarantees the 100km walk to Santiago and the piece of paper that will adorn walls for years to come: you can get the Camino’s credential document at the port tourist office or in San Julian de los Prados Church, remembering to get your stamps en route.

“In Medieval times ‘The Way’ was a dangerous place,” said our guide Richard.

“People would complete their last Will and Testament before starting their journey, and many would hire mercenaries to protect them from bandits and thieves.” The Knights Templar were part of that protection force.

Even now many modern-day pilgrims can be seen in light sandals carrying a staff and even sporting a cloak like their Medieval forebears and, on the way to Santiago, some will stay in one of Galicia’s 70 or so public albergues (hostels), most of which belong to the Xacobeo, the Galician public organisation in charge of promoting the Caminos de Santiago the world over.

But, because the myriad of walks attract people of various ages, more well-heeled travellers often make their way to one of the region’s artisan b&bs which are superb and do a mean local breakfast!
The English Way’s two start points eventually converge but, depending on when and where your journey begins – April to October is a good time - will determine what you see.

The old fishing village of Ferrol – now a city - with its huge Naval facility, is more a destination ‘start point’ for the English Way rather than a tourist destination in its own right. 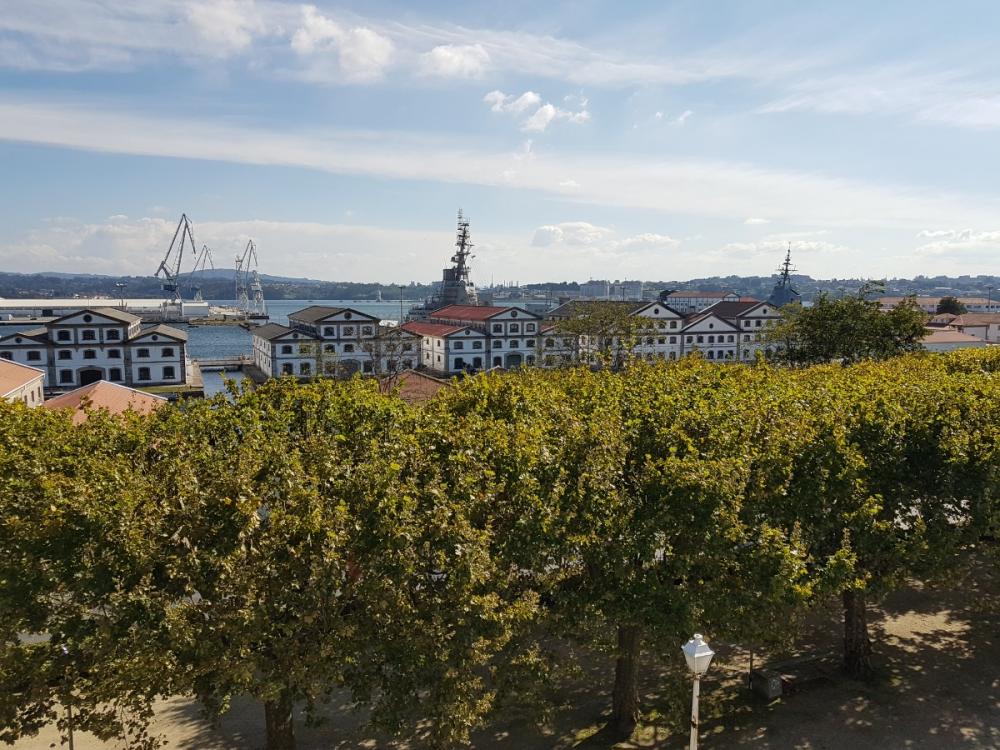 The Ferrol route starts at the Curuxeiras Wharf and takes travellers through the city, reaching the pleasant and shaded Canton del Molins and leaving via the neighbourhood of Caranza where pilgrims can visit its simple but beautiful, church, on to the municipality of Naron, cross the Xubia River to Neda, famous for its bread, and where a public shelter still opens its doors to wayfarers.

However, to its south the town of Pontedeume... 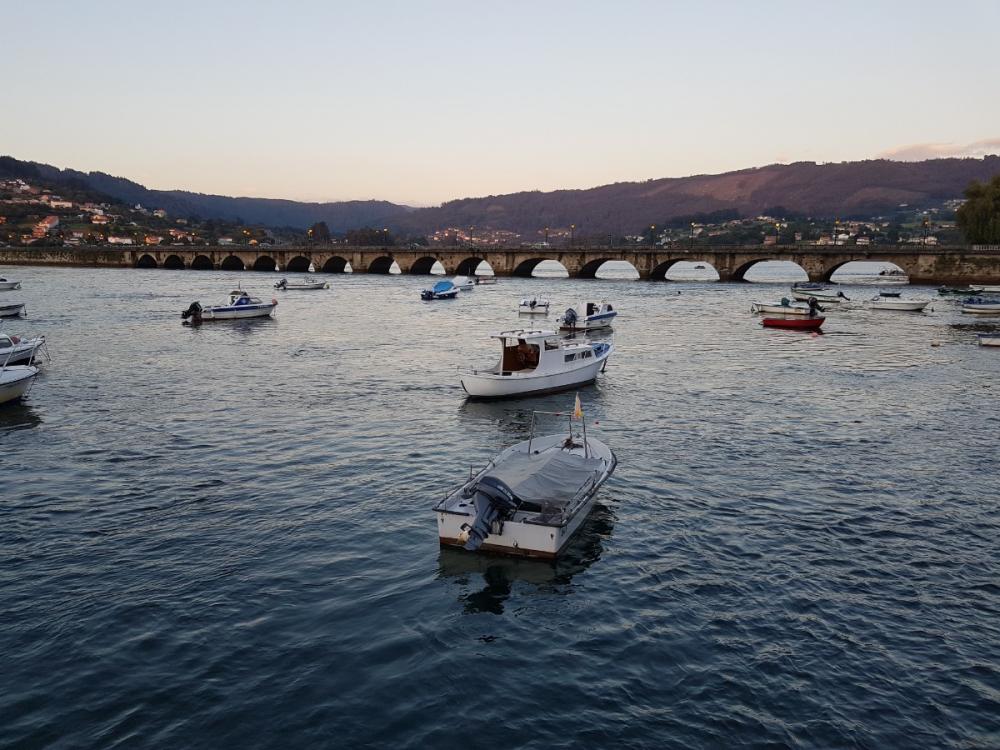 ... with its spectacular bridge, provides a pleasant interlude ahead of Betanzos with its plethora of churches, wonderful town square and statue homages to the Indianos, those emigres who left for the Americas, returned wealthy and invested in their home towns. 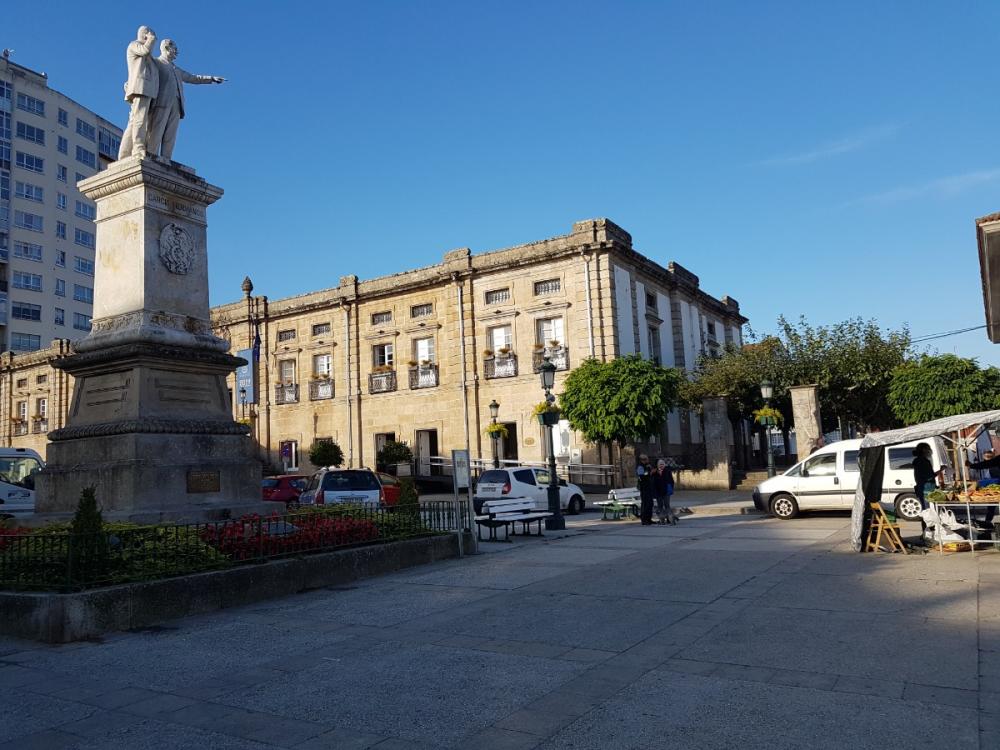 As Carras village boasts its own medieval woodland and there are more picturesque places throughout with, of course, the ultimate prize being Santiago and its stunning cathedral, now fully restored and home to the Portico of Glory, nearly half a century in the making and masterpiece of the almost forgotten genius, Master Mateo, a name that can be whispered in the same breath as Michelangelo.Santiago is breath-taking with its glorious cathedral and traditional groups of La Tuna singers... 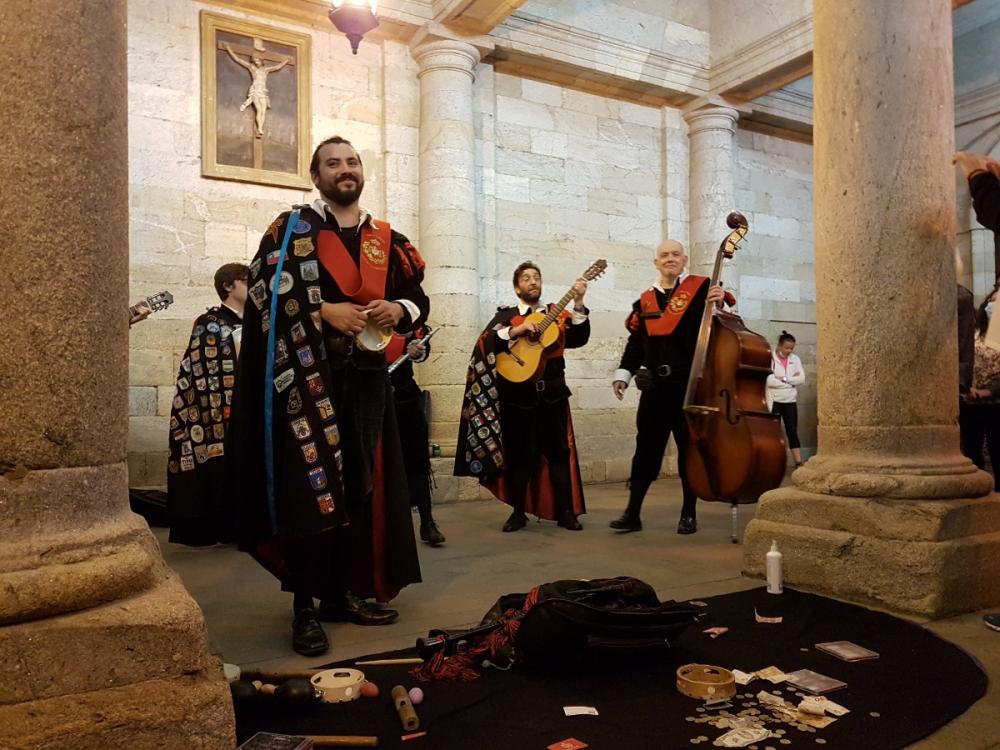 ... who parade around the main Obradoiro Square... 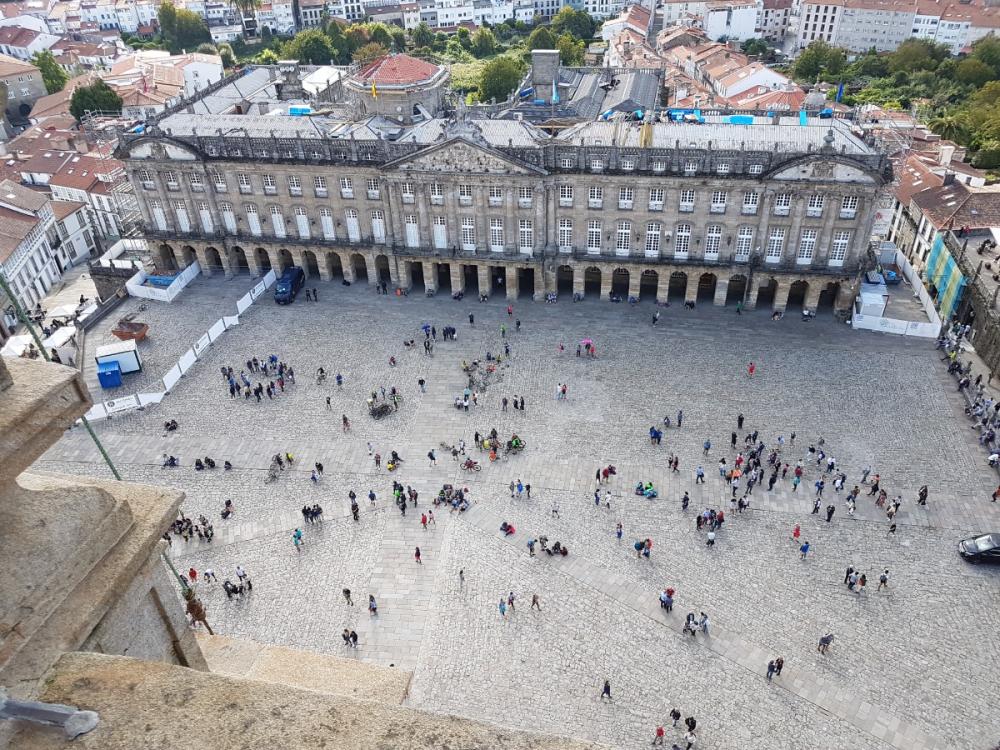 ...nightly singing their loves songs to any ladies who’ll listen, and the stunning Hostel dos Reis Catolicos, which still invites the first 10 pilgrims who walk into its premises each day with proof of their walk, to a meal 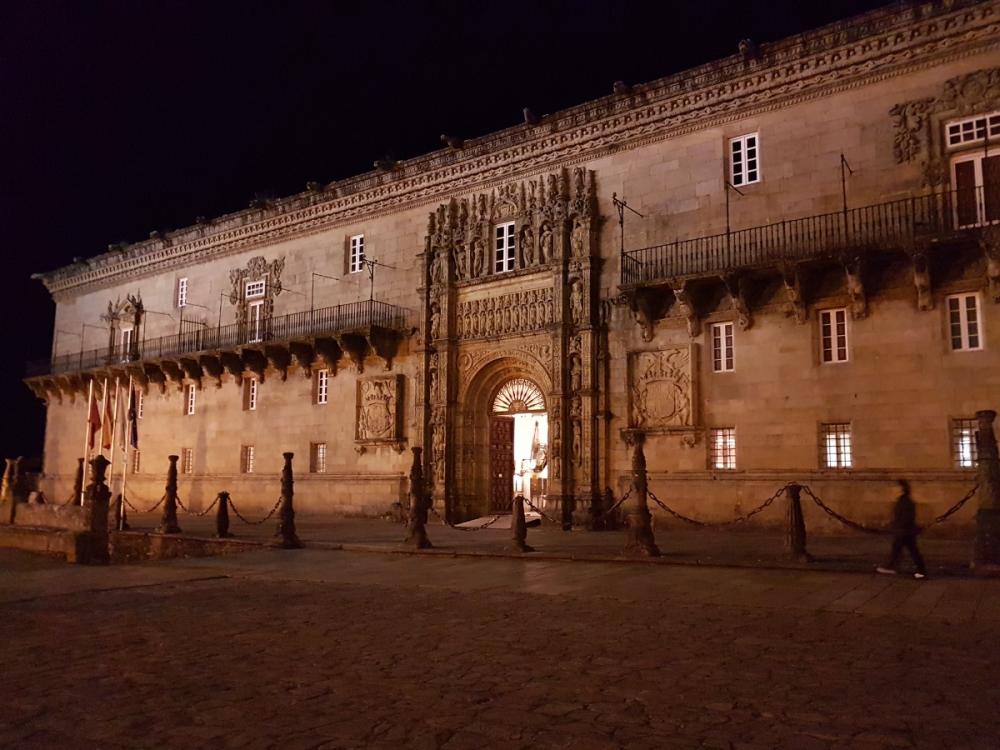 But for those with fight left in their legs, enthusiasts can continue on to the Medieval period’s ‘end of the world’ and Finisterre, taking in the stunning Ponte Maceira – or the Bridge of the Apple Tree en route – before eventually bathing in the glory of a journey well done. 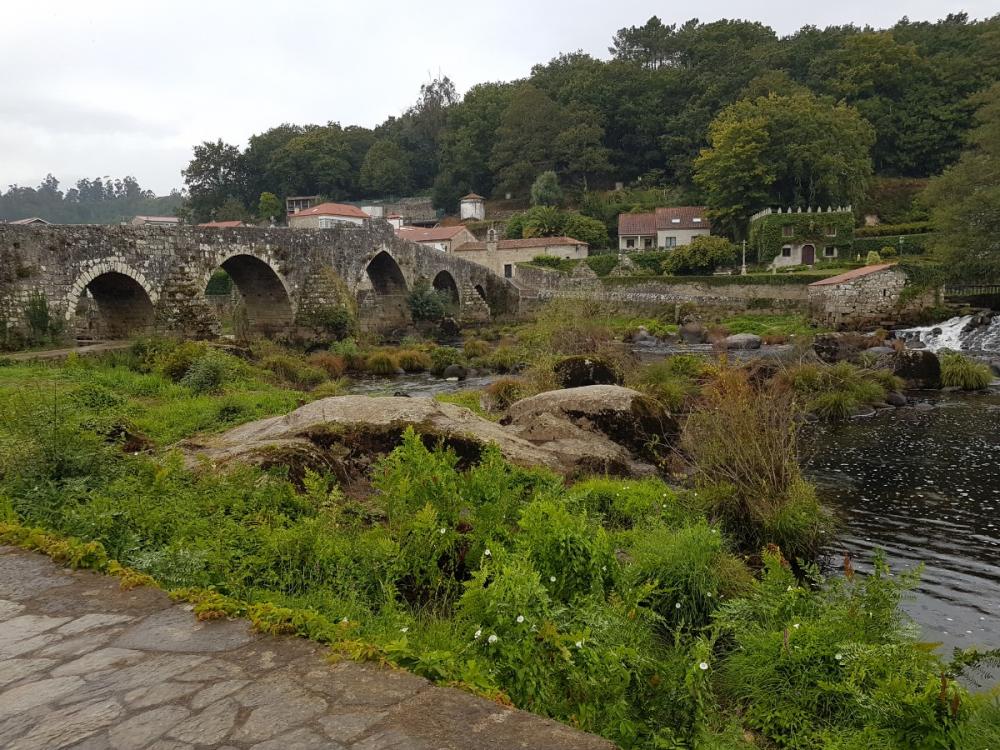 The English Way is not the longest of the various Caminos but it is the newest of the oldest trails and, for that reason, is still relatively quiet.

But, all participants say it is a life affirming walk that gives you time for contemplation and the chance to savour one of Spain’s most beautiful, charming and historic regions. 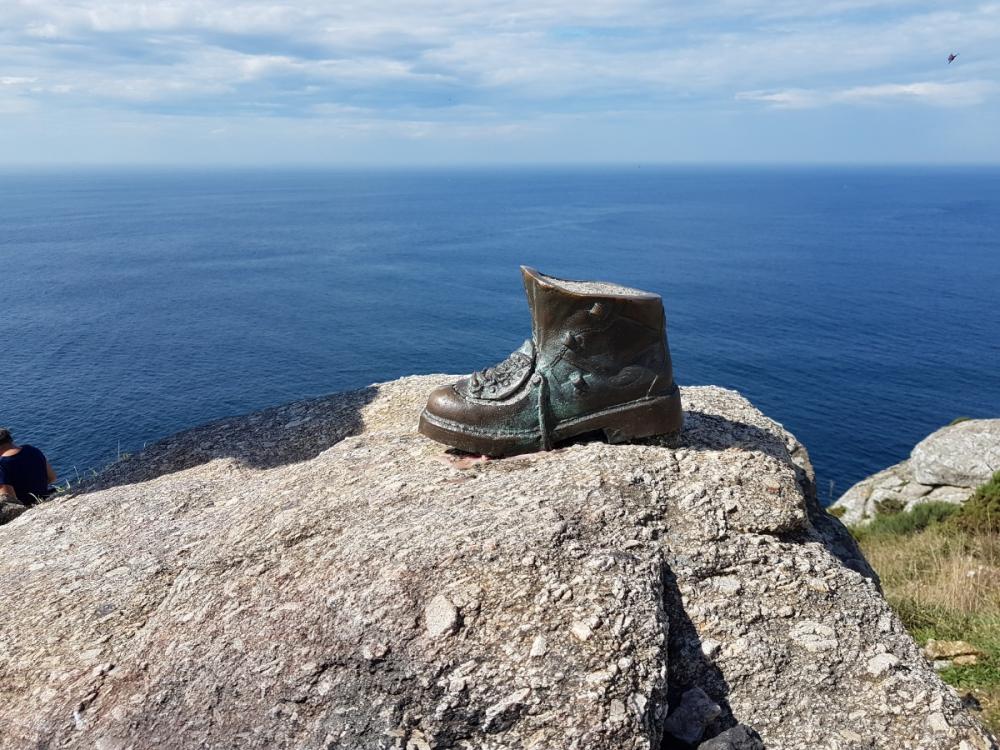 Martin Sheen even starred in the 2010 movie, The Way, about one man’s quest to come to terms with his son’s death 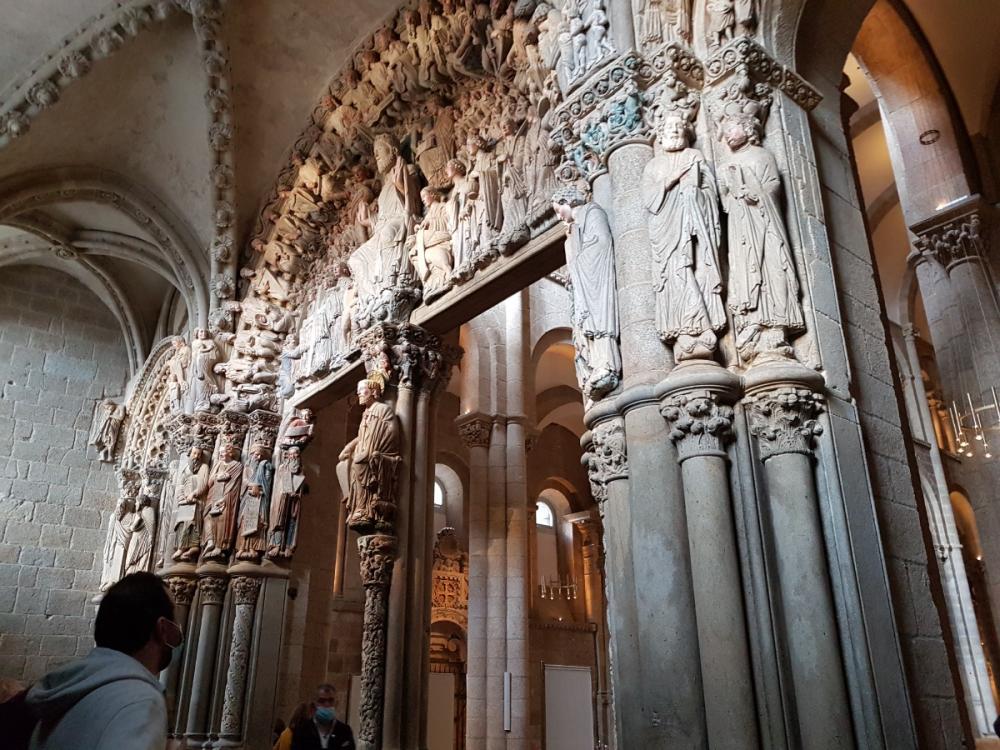 I stood marvelling at Master Mateo’s Portico of Glory. There were ‘no photography’ signs everywhere.

Sister Janet whispered in my ear: “There’s a saying in the Vatican,” she said. “’It is easier to commit a minor breach of the law than to get permission’”. 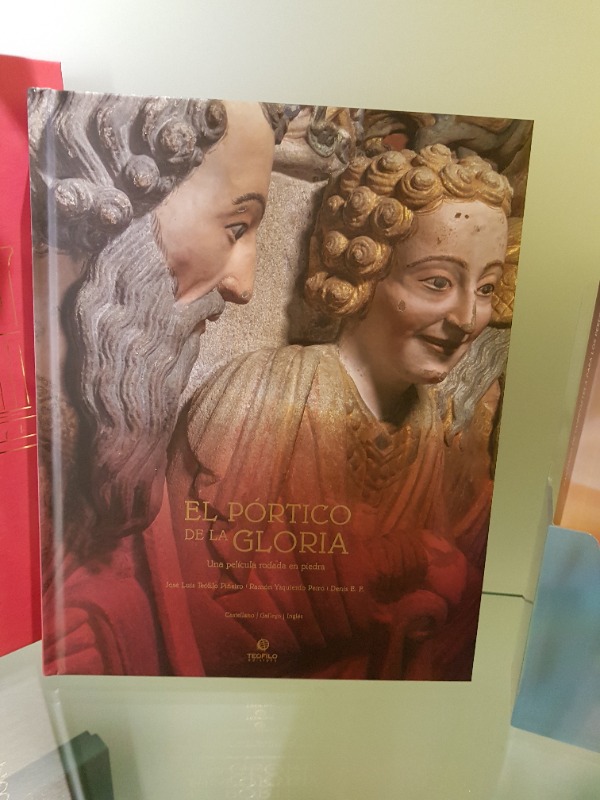 I surreptitiously snapped a photo of Mateo’s masterpiece – home to what’s said to be the first ever human ‘smile’ captured in stone.

A smirk spread across my face. A piece of Master Mateo's work was in my camera for ever and me and Sister Janet had just committed a minor transgression….but at least we were in the right place for forgiveness and the Vatican would have approved!