The Author Behind Watch Her Fall

Like me, Erin Kelly hails from Essex and is also a journalist. But that’s where the similarity stops as she is also a successful crime author. Watch Her Fall is on the Theakston Old Peculier longlist 2022

Erin started out by writing the kind of books she wanted to read. “I didn't choose to write crime I just decided to write the kind of books I was enjoying. I read a lot of Barbara Vine, Du Maurier, Patricia Highsmith, and Nicci French.

“So, I was kind of nailing my colours to the mast of suspense rather than crime. Then I was informed I was a crime writer. And I was thrilled to be told that was the case.”


Erin Kelly. ©John Godwin. Reproduced with permission
Kelly writes psychological thrillers within a subgenre of crime and as she explains, “if you set out to write a police procedural story there's no ambiguity about it, straightforward murder mystery where one is going through an investigation looking for a solution.

"Psychological thrillers, however, tend to investigate and are not procedural, it's as much about the victim or the perpetrator, as anything else.”

I’m fascinated with the subject matter for Watch Her Fall which has been set in two locations - a theatre for ballet dancers plus a flat, and I am keen to hear how she came to ballet as a theme.

“The setting, the isolated woman in the house, was the first part of the idea and from there I needed a reason for her to be isolated. I've read a lot of books about acrophobia and claustrophobia, and I knew I wanted it to be a physical reason rather than a mental one. I thought she needs to be injured and I backtracked to ballet. It wasn’t taking off or going anywhere but as soon as I knew my character was an injured ballerina that was the moment the boulder started rolling down the hill in terms of the plot.” 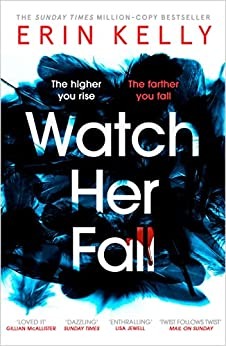 One of Kelly’s favourite ways to research is reading memoirs because, as she tells me, “you don't just get the colour, facts and the day-to-day realities of your character's life. You also get tiny details about thought processes and mindsets that let you understand how these people work and dancers have an incredibly extreme psychological makeup which in some ways, is almost more impressive than the things they can do onstage. They need to be so driven and competitive and yet they are incredibly vulnerable. I read and I read, and I read, just to understand what makes the dancer from the inside out.”

The other technique Kelly uses is interviewing but most of the writing for Watch Her Fall took place during lockdown and she was unable to go for backstage visits to talk to everyone involved.

“It was difficult but, during lockdown, dancers shared a lot over Instagram. I had two dancers collaborating with consultants, so they asked me questions as I went along and both read the finished script, corrected me where I've made mistakes and told me what was working. And I still haven't met them which is a terrible shame.”

Delving a little further Kelly tells me she liked to dance in the local church hall as a seven year old and then did a lot of contemporary dance as a teenager. “As an adult, my calling turned out to be much more sedentary than physical. It wasn’t my great ambition to be a prima ballerina, but that little bit of background did help.”

Psychological crime needs a good plot as Kelly’s books always prove and I wonder how she creates her plots; do they just flow?

“I wish it did just flow. It sounds disingenuous to say, I don’t plot. I tend to write a very messy first draught in lots of scenes that I think are exciting or raise questions and then the bulk of the work is spent re ordering those scenes seeing if they deserve their place. In a way I do plot, by writing my chapters, which I do it at the desk. I find it very difficult to pre-plot because I haven't got any clay to work with if you see what I mean. I'm definitely a very instinctive writer who writes a plot and in the editing process make sure I just tighten and tighten it with every draft.”

As we draw to the end of our interview I enquire about her recent book and immediately get excited.

For many of us of a certain age, growing up in the 1970s, who can forget Kit Williams' 1979 book Masquerade that sparked a national treasure hunt by including concealed clues to the location of a jewelled golden hare hidden somewhere in Britain? As a fourteen year old I was obsessed, working on it as a family project. And disappointed when someone found it in Ampthill in Bedfordshire a few years later.

As humans, we are programmed to love stories, and crime fiction gives us a very heightened story, Kelly says. There is a degree of escapism to it and living vicariously through dangerous times without being put in danger is all part and parcel of it.


The public are now invited to vote for a shortlist of six titles at www.harrogatetheakstoncrimeaward.com. Voting closes on 26th May, with the shortlist announced and winner voting opening on 14th June. The winner will be revealed on the opening night of Theakston Old Peculier Crime Writing Festival, Thursday 21st July, receiving £3,000 and a handmade, engraved beer barrel provided by T&R Theakston Ltd.

The longlist was selected by an academy of crime writing authors, agents, editors, reviewers, members of the Theakston Old Peculier Crime Writing Festival Programming Committee, along with media partners the Express. The award is run by Harrogate International Festivals sponsored by T&R Theakston Ltd, in partnership with Waterstones and the Express, and is open to full length crime novels published in paperback 1 May 2021 to 30 April 2022 by UK and Irish authors.
Also by Andrew Palmer...
Classical Music Album: John Ireland Orchestral Works - Sinfonia Of LondonWeekend Dining: The Crown Inn At Roecliffe, BoroughbridgeThe Business Interview: Dr Casey WoodwardFantastic Frankie A Tale For Our TimesClassical Music Album: Weinberg String Quartets Vol 2
More in this series...
The Author Behind The CutThe Author Behind Dead GroundThe Author Behind The TrawlermanTheakston Old Peculier Crime Novel Of The Year 2022 Longlist Announced