After a disastrous summer at the box office, there was finally a bit of good news last week as a blockbuster hit our screens. Christopher Nolan’s new thriller centres on a secret government operative trying to manipulate time and prevent an algorithm from the future inverting the world. 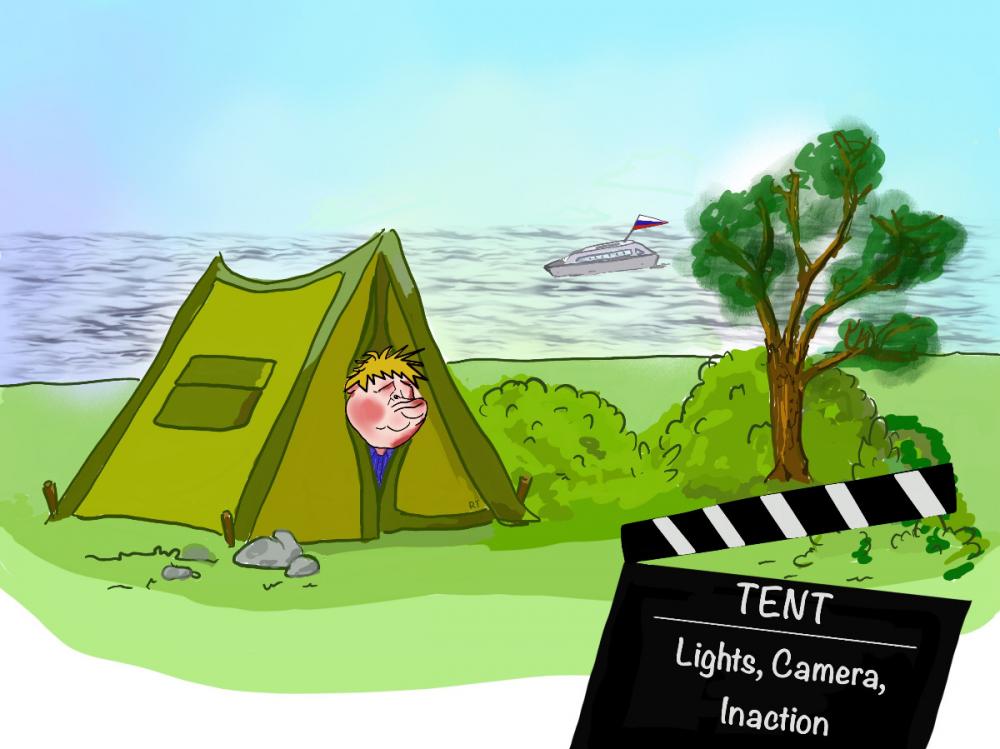 “TENT”, starring Boris Johnson, sees our hero trying to escape to a remote part of Scotland to evade a deluded team of conspiracy theorists. A photo from the location raised more questions in the pursuers’ minds. Why put up a tent when there is a perfectly good cottage to sleep in? Why do the baby’s legs look shorter than they did a month ago? Who is the mysterious Russian oligarch on a massive yacht just off the coast? Quite frankly, who cares? Why are people bothered about this conspiratorial guff?

All of these questions and more won’t be answered when you see TENT. On general release now, this nonsense will continue for the next four years. Don’t miss it!

Johnson also starred in one of Nolan’s earlier films, Conception, in which he uses the algorithm method of birth control, with predictable consequences. He had made a withdrawal agreement but unilaterally decided he didn’t want to go along with it after all.

After his return from Scotland, Johnson made a speech to a group of schoolchildren, finally acknowledging the disaster of the A-level and GCSE grading row. “I’m afraid your grades were almost derailed by a mutant algorithm,” he said. And when it comes to computing and technology, he knows what he’s talking about: he had extensive technology lessons with Jennifer Arcuri.

The government blamed not only the algorithm for the grading fiasco, but also Ofqual and the permanent secretary in the Education department, who quickly found his permanency had been overstated. They perhaps need to find a new word to replace “permanent”. Even longstanding Conservative MPs such as Bernard Jenkin are becoming worried by the blame game: “I'm concerned,” said Jenkin, “that there's a sort of a pattern setting in under this government that something goes wrong and it's the permanent secretary's fault or it is some public body's fault but it’s never the government's fault.” I too am starting to think the same thing: that Johnson would like to rule by absolute fiat (Fault Is Always Transferable), though at the moment it’s more like rule by absolute fiasco.


Also by Roger Winterbottom...
It's Coming HomeTragedy Or Farce: Hell Hath No Fury Like A Cummings ScornedTriumph Of The SwillRun With The FoxHonesty Is One Of A Range Of Options
At least Johnson is now taking things seriously. The Financial Times reported that a close ally of Johnson’s recently said, “At the beginning of every big job Boris takes over, he prefers to stand back and act as chairman…But there comes a point at which he gets fed up and personally intervenes. I think we’re quite near that now.” That’s nice. Six months into the pandemic, with 60,000 dead, the economy in tatters, and Johnson’s nearly at the point where he’ll get involved. He’s like a homeopathic Prime Minister: there is some distant memory of the job he’s supposed to be doing but he’s so diluted you can’t really tell he’s there.

Perhaps I’m being unfair. Johnson has made another telling intervention in recent days, speaking out forcefully on – hm, let me see – what tunes get played at the Proms. It’s lucky for us there is nothing more important going on at the moment. In the same week in which a French government minister stated that it is a fundamental French liberty to sunbathe topless, our fundamental British right appears to be to have Rule, Britannia sung into our faces forever.

The government has also increasingly been making threats to get people back into city centre offices. They don’t seem to realise that the key word in “working from home” is “working”. Grant Shapps was interviewed about this, slightly undermining his message by conducting the interview from, erm, home. Apparently the motivation for getting people back into the cities and towns is that lots of other businesses rely on lunchtime trade, with the government highlighting dry cleaners and sandwich shops. I guess the government is so keen to protect them because making sandwiches is the only manufacturing industry we have left. Richard Littlejohn wrote a long article in the Daily Mail berating the public for not getting back to the office, and how unsustainable the situation is, before briefly acknowledging – twenty-six paragraphs in – that he has been working from home for, ahem, thirty years.

Not only does the government want everyone back working in offices, they are also insisting that all children must be back in school, with fines threatened for parents who do not send their children in. There are also fines threatened for young people who gather socially in groups of thirty or more. Remind me again – how many people are normally in a school classroom?