It’s one of the highest and most beautiful stretches of motorway in the country - part of a post-war motorway construction jigsaw that, piece-by-concrete-piece, revolutionised road travel in Britain. And retired engineers across the country are remembering their role in its birth 50 years ago today (Friday 23 October 2020).


The M6 through the Lune Gorge. Photo by Highways England
When the newest addition to the M6 – the 36 miles between Lancaster and Penrith – was opened in October 1970 it incorporated the spectacular Lune Gorge and, just a few miles further north at Shap, the highest section of motorway in the country at the time at 316 metres above sea level.

Civil engineering specialists Laing was appointed to build the 14-mile Killington to Tebay section running alongside the River Lune, hugging the contours of the Cumbrian hills and following in the footsteps of Roman road builders and Victorian railway engineers some 1900 years and 125 years before them.

The work through the beautiful but at times beastly Lune Gorge – the weather and ground conditions were some of the most challenging ever faced by UK engineers - was the biggie-in-the-middle of five separate construction contracts making up the new Lancaster to Penrith M6. The new motorway literally paved the way for faster, safer and more reliable journeys to the far north and Scotland - and boosted the industrial and tourism economies of Cumbria.

Laing engineers Mike Gellatley, Harry Macdonald Steels, Selwyn Charles-Jones and almost a thousand other roadworkers faced a unique battle of engineering wits against ground conditions and the elements to build a stretch of motorway frequently voted the most beautiful in the country and even highlighted today by Visit Cumbria.


A young Mike Gellatley discussing the project with a colleague. Photo © Historic England.
Enjoying the Cumbrian scenery. Photo © Historic England
Mike, a Fellow of the Institution of Civil Engineers (ICE) and former London Underground chief engineer, arrived at Tebay in October 1967 having cut his teeth on the Stoke to Stafford section of the motorway.

“It was an amazing project to work on,” he says 50 years on. “An isolated greenfield site with difficult terrain and pretty hostile weather a lot of the time. They had to strengthen the roads from Kendal and build a special supply-line road just to get plant and material to different parts of the construction site - and it was a constant battle against the elements.

“Residents in the area were initially sceptical about the motorway but it totally transformed journeys. In the days before the M6 a journey up to the to the far north and Scotland was a torturous adventure with vehicles often having to queue in winter to get past snow along the A6 at Shap.”

A memoir penned by Harry recalls being encouraged to leave the comforts of the company office to head ‘somewhere in the wilds north of Tebay’ to get some ‘civils’ experience.

He wrote: “The tops of the Westmorland fells in late October are a harsh contrast to warm offices in London! At one stage I had on every piece of clothing I had taken up from London with me - including my pyjamas - under the protective clothing supplied by Laing.”

Project manager Selwyn was Laing’s main man in overall charge of day-to-day construction at the location. Alongside the stresses and strains of delivering such a complex engineering project he recalls an amusing – and almost uniquely Cumbrian - occupational hazard:

“It was the sheep,” he says: “On one occasion some had worked out how to jump the fence and lead the rest of the flock onto the construction site and it was our job to clear them off before we could start work. We solved the problem by putting them on a lorry and taking them to next section above and let them out…and that was the last of we ever saw of them!”

He says: “It was a vital part of the development of Cumbria’s transport network, connecting communities and providing one of the most scenic sections of highway anywhere in the country to drive through.

“It made the county more accessible to the rest of the country and has enabled local businesses and residents to trade, travel and connect with the wider region. I am pleased to celebrate the 50th anniversary of this beautiful stretch of road – not many counties can boast about their motorway, but we certainly can in Cumbria!”

The 50th anniversary of the Lancaster to Penrith section prompted Alex Finkenrath, publications and communications manager of the John Laing Charitable Trust, to trawl the company’s archives and unearth everything from old photographs, newspaper clippings and even a fascinating 30-minute 1971 documentary (external link) preserved by the British Film Institute and focusing on the social aspects of the Lune gorge ‘challenge’ as much as the myriad feats of engineering. Much of the photographs from Laing's involvement in motorway building across the era are preserved in a special Historic England archive


After two years of day and night works the carriageway takes shape. Photo - Laing’s 30 minute documentary/BFI
The newly-opened motorway running alongside the main Lancaster to Carlisle railway line. Photo - Laing’s 30 minute documentary/BFI
Nowadays, the M6 is operated by Highways England, a government company launched in 2015 in place of the Highways Agency to deliver a programme of transformational, fit-for-the-future improvements to the country’s motorway and major A road network.

Government investment - unrivalled since the golden age of the motorways in the 1960s and 1970s - is now delivering extra lanes, improved surfaces and innovation for safer, smoother and more reliable journeys up and down the country’s network of motorways and major A roads. The Government invested more than £15.2 billion between 2015 and 2020 with a further £27.4 billion available during the current five-year investment period to 2025.

The money is funding everything from economy-boosting new bypasses and major motorway upgrades to environment-enriching cleaner air and bio-diversity projects – as well as improvements for cyclists, pedestrians and horse riders.

Alan Shepherd, Highways England’s regional director for the North West said:
“Our motorways and major A roads are the arteries of the economy keeping businesses, commuters, tourists and goods and services on the move. While we’re expanding capacity around our major towns and cities where our motorways are most congested we’re also working hard to make journeys, safer, smoother and more reliable everywhere – including in Lancashire and Cumbria.

“Our £1 billion plan to complete the dualling of the A66 between Penrith and Scotch Corner is the most eye-catching example of our commitments in the area. But we’re also busy planning or delivering important improvements and maintenance elsewhere – like the £150 million new bypass near Fleetwood, a new roundabout to help support new homes and jobs along the A590 near Barrow and work to renew road surfaces and safety barriers.” 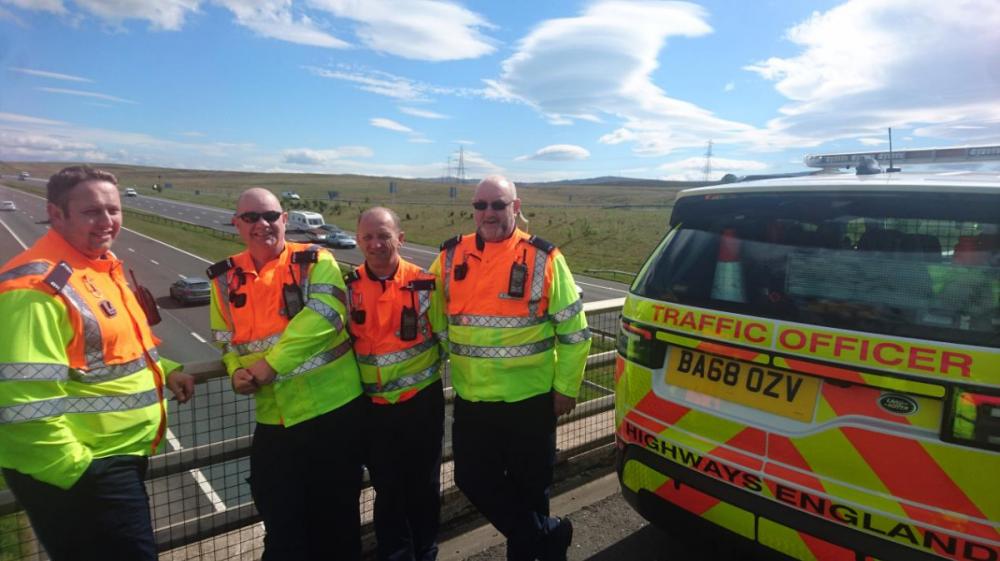 Highways England traffic officers Marcus Webster, Paul Morton, Allan Pollard and Tom O’Neill. Photo by Highways England
The Lancaster to Penrith M6 was officially opened by Transport Industries minister John Peyton on 23 October 1970, also a Friday, which is just one of the facts and figures from the project that probably deserves its very own pub quiz…

The project also included Carnforth to Farleton, Farleton to Killington, Tebay to Thrimby and Thrimby to Penrith sections;
The new road quickly won a Civic Trust award for its sympathetic construction within the landscape of Westmorland;
The M6 at Shap was the highest section of motorway in the country – for just 58 days! In late 1970 a new section of the M62 across the Pennines between Manchester and Leeds was opened and – at 372 metres above sea level - remains Britain’s loftiest motorway;
The Cumbrian M6 features lengthy ‘split-level’ sections with carriageways separated by the terrain – by hundreds of feet in places – which help to manage snowfall. The southbound carriageway also often drops several metres away from the northbound;
Temperatures in the area can be five degrees Fahrenheit cooler than just a few miles further south and the project required at least two location-specific weather forecasts every day;
Rainfall in the gorge is three times the national average with gentle becks quickly become raging torrents in bad weather. Some 750,000 cubic metres of rock blasted to make way for the road was recycled in novel ‘layer-cake’ embankment construction that utilised the area’s ubiquitous rain-sodden soil to assist drainage - along with dozens of reinforced culverts;


On 23 October 1970 the latest section of the M6 was opened by Transport Minister John Peyton. Photo © Historic England 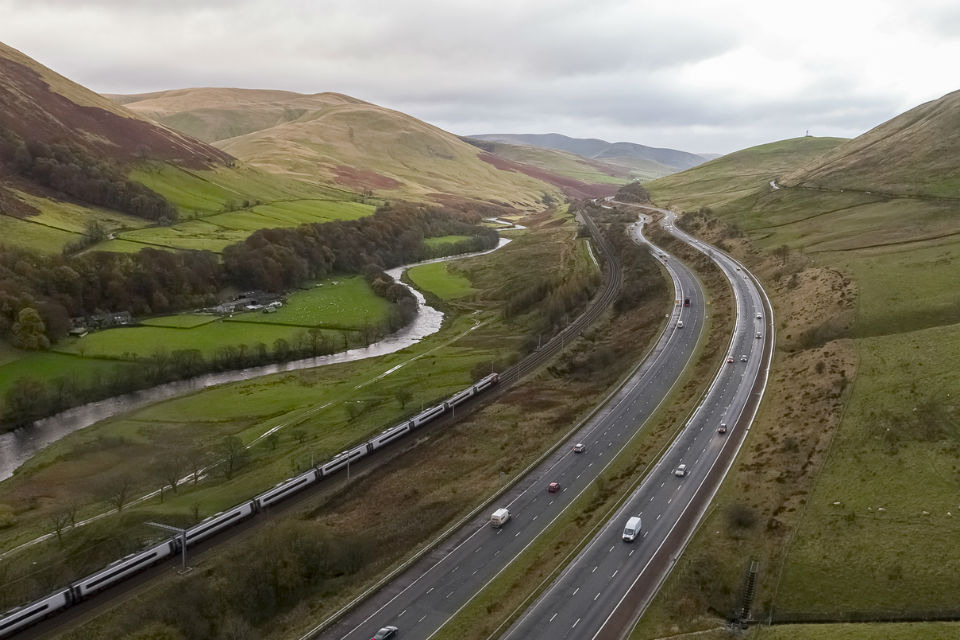 The M6 as it snakes through the Lune Gorge . Photo by Highways England
The area was so isolated a concrete-making plant and bridge beam casting facility were built in-situ. There are 160 structures on the Lune Gorge section of the motorway of which 77 are underpasses or bridges like the 73 feet high Borrowbeck viaduct, ten feet higher than the adjacent stone arch railway viaduct;
The survey which mapped out the Victorian railway line was done on horseback; the surveys for the M6 through Cumbria were done from the air – a first for the UK;
Given the isolated location, most of the roadworkers and their families moved to the area – buying houses, lodging with locals, bunking up in an old school-turned-hostel at Tebay or settling on a specially-constructed caravan site. The children attended local schools and their parents had their own social club and sports teams – integrated into local cricket and football leagues.

And finally…at 236 miles, running from Rugby in Warwickshire to the Scottish border, the M6 is the longest motorway in the country – but it wasn’t actually completed until 2008 when the Highways Agency finished converting the A74 between Carlisle and Gretna Green.