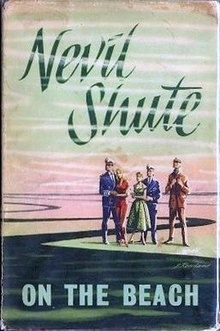 On the Beach first edition cover
Each generation has its own fear to face. In our case, it was the atom bomb and the potential for nuclear disaster. The notion that the two world leaders of Russia and America each carried a case containing a red button, just waiting to be pressed, was not fanciful to us, as children. The world of television and film reinforced the fear. I remember a fantastic, albeit gruelling, docu-drama called Threads (1984, though I would have sworn it was earlier) which explored what would happen if an atom bomb exploded in the dead centre (pun intended) of Sheffield. The bleak, grey images projected on screen remain with me. Planet of the Apes (1968) and several of the Bond films all centred around the nuclear threat. Entertainment or dire warning.

The anniversary of the second atomic bomb drop, on Nagasaki, three days after the first on Hiroshima, is cause for remembrance. I won’t argue for or against Truman’s decision, this is not the place, but like so many events it is recorded in Literature. Books become documents of social and political history and demonstrate attitudes, ideals and philosophies, in context.

John Hersey wrote Hiroshima in 1946. Beginning on the morning of August 6, 1945, the day the first atomic bomb was dropped, it tells the stories of six survivors of the attack, starting with their memories of the ‘Blinding Flash’ and following their lives thereafter. Employing his skills as a journalist, Hersey used storytelling techniques to relate real events, realising the magnitude of the event and bringing it to gruesome light.

Neville Shute’s On the Beach (1957) was another dramatic account of nuclear disaster. The novel, which has also been made into a film (twice), follows the experiences of a mixed group of people in Australia as they await the arrival of deadly radiation spreading towards them, following a nuclear war in the opposite hemisphere. As the radiation approaches, each person deals with their impending death in a different way. I’m not sure how many times I have read the last chapter when Moira calls for Dwight to wait for her as the submarine ‘vanished in the mist’ and she swallows the contents of the red carton ‘with a mouthful of brandy’.

As teenagers, we were surrounded by such emotive literature and this continued well into my teaching years. Who can forget the final lines in Adrian Mitchell’s poem ‘Fifteen Million Plastic Bags’ - ‘Five million were stamped with Mickey Mouse/And they came in a smaller size’? or ‘Your Attention Please’ by Peter Porter, a poem which mimics the language and seriousness of a public information broadcast while incorporating moments of ludicrousness. The tone of the opening lines is direct, discomforting, and frightening but then ‘The ‘All Clear’ will be signalled by ‘the cuckoo in your/perspex panel’. Thought provoking yet sinister in an almost macabre way. 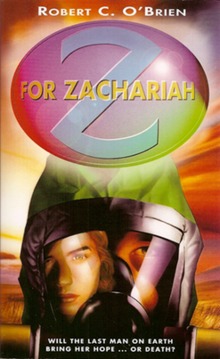 A popular novel in schools was Robert C. O’Brien’s Z for Zachariah, published posthumously in 1974. It is a different but equally uncomfortable vision of post-nuclear existence. Not for the faint hearted, the narrative takes the form of a diary written by sixteen-year-old Ann Burden. Living in a small valley which seems to have escaped radiation poisoning, she appears to be the last survivor of a nuclear war. Her family have not returned from a search expedition and Ann lives alone.

A year after the war, a stranger in a radiation-proof suit approaches her valley. Afraid he might be dangerous, Ann hides in a cave and watches as he mistakenly bathes in the one radioactive stream. When he falls ill, her fear of being alone forever leads her to reveal herself to help him.

As Loomis recovers, Ann is taken aback when he forbids her to touch the safe-suit and begins giving her orders on farming and managing resources. She is troubled and as their relationship quickly deteriorates, accelerated by his attempted rape of her, she has to flee to the cave for safety.

Later, Ann approaches Loomis and proposes sharing the valley and farm work but living apart. The arrangement is "unnatural and uneasy," especially when Loomis locks the store, cutting off her supplies. He shoots her in the ankle, not to kill, but to injure her to make her easy to capture. Ann escapes but her ankle wound becomes infected. She has feverish dreams of another valley where children wait for her to teach them. She plans to steal the safe-suit and find her dream valley. No more – read it for yourself. It is an edgy read in places but there is a glimmer of hope at the end.

Surprisingly, the novel was serialised in Jackie magazine (remember that!) and in February 1984, the BBC presented a film adaptation, changing the setting from America to Wales. One school I taught in refused to let us show it because of a single shot of a naked Anthony Andrews bathing in the river. There was also a 2015 film adaptation of the novel which added a third character and created a love triangle, changing the emphasis for a new audience.

Rightly or wrongly, though perhaps understandably, these books no longer take up space on the dusty shelves of school stockrooms. As the world has moved on, the focus has changed. But it is to be hoped that these books are not totally forgotten, nor, more importantly, the message inherent in them.


Also by Artis-Ann ...
Revenge Is A Dish Best Served Cold: The Racketeer By John GrishamA Different Perspective: The Other Side Of Truth By Beverley Naidoo, Stone Cold By Robert SwindellsA Righteous Compromise: Big Sky By Kate Atkinson‘You Need All The Luck You Can Get’: A North Sea Tale By Chris SpeckIn The Eye Of The Storm: A Cotswold Ordeal By Rebecca Tope