With the courts in the USA set to hear another round in the legal battle to #FreeBritney from the abusive conservatorship, is it possible we could see the same thing over here? Is there any chance we could #FreeBritain from the abusive Conservatives?

There has been speculation about what the Johnson government will stand for: what will its policies be now that Brexit is done and they are free to pursue their agenda. What will ‘levelling up’ mean in practice? What will ‘Johnsonism’ look like? 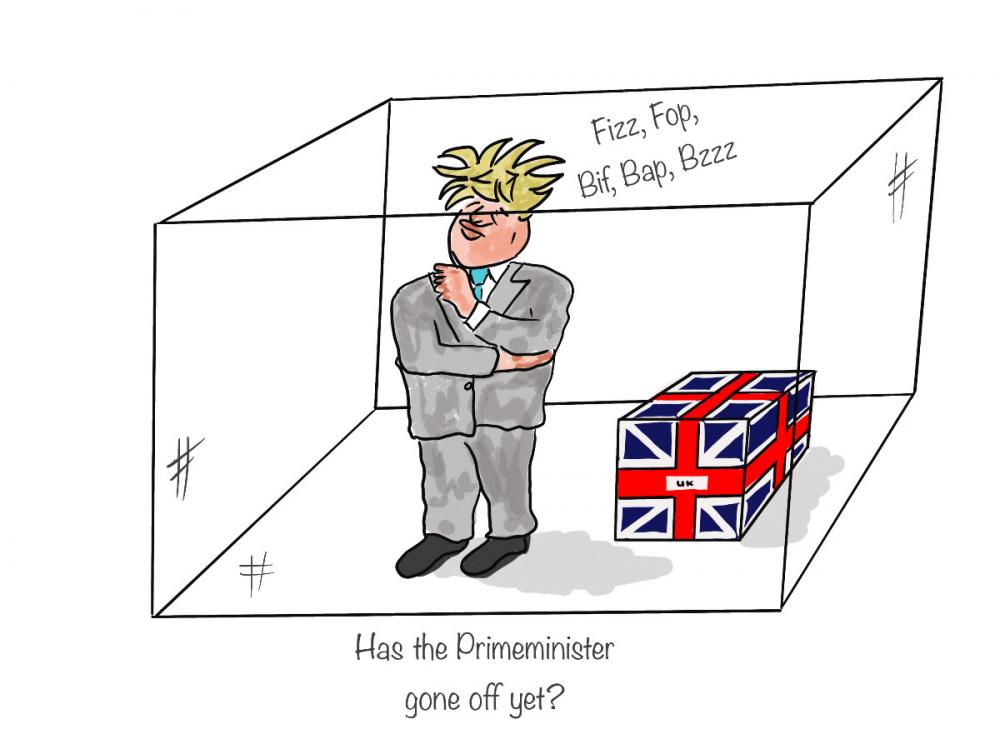 Johnson had the opportunity to lay out his vision last week in a flagship speech which, we were told, he had been working on all week. Taking to the stage looking like his nanny had just picked him up from a soft play session at Tumble Toffs, he proceeded to give a speech that had less narrative structure and meaning than an episode of In The Night Garden.

It’s only a couple of weeks since Gareth Southgate’s article on the forward-thinking inclusivity of the England team had been decried by Tories as “suspiciously well-written”. There was no chance of anyone suggesting Johnson’s speech was well-written, suspiciously or otherwise.

Oddly, Johnson even appeared to have gone back to the future, talking about the “loony left” like we were still in 1985. “The loony left remains pretty loony and we need accountability,” said the man who has never been held accountable for anything.

Among the other ‘highlights’ was a commitment to spend £50m on new football pitches. Thanks, guys – it’s a shame the Tories have overseen the loss of over seven hundred pitches in the last decade. It’s rather like those twenty thousand ‘new’ police officers that will replace the twenty-one thousand that have been cut.

There was also £10m announced for clearing up chewing gum from streets. I could be going out on a limb here, but removing some chewing gum may perhaps not be enough to reverse decades of social inequality. And that was about it in terms of policy substance. Other than that, Johnson appeared to appeal to people to email him if they had any good ideas about what levelling up means, since he doesn’t seem to know himself. As Dominic Cummings said on his blog, levelling up is “just a vacuous slogan” Johnson made up because he was “irritated with people calling him a puppet who repeats my slogans”. At least he’s now progressed to being a puppet who repeats his own slogans.

You always know when Johnson doesn’t have much to say because he starts spouting metaphorical gibberish. Levelling up, he said, was “the yeast that lifts the whole mattress of dough”. Mattress of dough? What is he talking about? It was, he went on, “the magic sauce, the ketchup of catch-up”. All this talk of food - do you think he’s hungry? Did Carrie forget to give him his morning snack before his nap?

There was recently an announcement that there was a new device available to lock someone’s jaw shut to facilitate weight loss. Maybe a Tory donor could be tapped up to fund one for Johnson? Not for weight loss - to stop him giving any more speeches. Obviously it has to be from a donor because he wouldn’t pay for anything himself.

With most COVID restrictions now being lifted, the public are being asked to use common sense and take personal responsibility. I wonder how that’ll work out. There was a picture in all the papers last week of a man shooting smoke and flame from his rear end. But enough about Richard Branson. No, this was the man who was loaded up on booze and cocaine – and no, not Michael Gove – pictured with a lit flare between his buttocks. There’s English common sense and personal responsibility for you. Of course, in another life he’d have been part of the Bullingdon club and being given a role overseeing standards in government. And honestly, he couldn’t be doing any worse than the current lot.

The man with the flare in his arse (not Kate Bush’s finest song) was part of the mob that broke through security and into Wembley for the European Championship final, while the Met Police were largely invisible. Perhaps they’d have taken more action if they’d been informed there was something really threatening taking place, such as a women’s candlelit vigil.

At the same time, various Tory ministers had somehow overcome their ideological opposition to the players taking the knee and were busy tweeting photos of themselves wearing newly acquired England tops. Rishi Sunak’s shirt still had its price label attached, while Priti Patel’s bore the creases from how it was packaged. Still, full Marx for trying.

Football did briefly think about coming home, then spotted Patel armed with a wave machine and a one-way ticket to Ascension Island and decided that Italy was nicer at this time of year. In the aftermath of England’s loss, Boris Johnson condemned the “appalling” racist abuse they received on social media. Quite right. The proper place for that is in newspaper columns in the Telegraph and Spectator.

Pressed at Prime Minister’s Questions about his own previous racist language - the “flag-waving picanninies” and “tribal warriors” with “watermelon smiles” - Johnson seemed to suggest that he couldn’t possibly be racist because he had appointed a minority ethnic home secretary. Yes, and Ron Atkinson had Cyrille Regis in his team, but he still got sacked from his TV punditry for using the n-word.

Johnson even suggested (sorry, lied) that the government had always condemned the booing of players taking the knee, rather like Glenn Hoddle telling us that he “never said them things”.

Still, it was nice to see Sajid Javid getting hands-on with his new health brief and gaining first-hand experience of Covid. As it emerged that Johnson and Sunak had been advised by the NHS app to self-isolate, the government performed one of the fastest reverse-ferrets on record. At 8am, it was said that the two would “continue to work in Downing Street” because they were part of a pilot scheme they’d just made up where they didn’t have to self-isolate. At 10:38, after condemnation and uproar from all sides, we were instead told that Johnson would now “remain at Chequers to self-isolate”. Have we got Schrödinger’s Prime Minister, who can be both at Downing Street and Chequers at the same time? You’d think the two of him would get more done.

Meanwhile Rishi Sunak tweeted that “Whilst the test and trace pilot is fairly restrictive, allowing only essential government business, I recognise that even the sense that the rules aren’t the same for everyone is wrong”. Funny he didn’t recognise it two hours earlier. But is no one worried that we won’t get any results from this vital pilot study that they’ve invented?


Also by Roger Winterbottom...
Energy Crisis - Welcome To The Unlit UplandsBroken Promises Come In ThreesNo Surprises As Raab Goes MissingHancock Gets A GripIt's Coming Home
Unfortunately, this is what Johnsonism looks like. Johnson has no care for who pays for his holidays, his home refurbishment, or his food. He says and does whatever is most expedient to him at the time, whether at PMQs, in his relationships, to win elections or to try to get out of following the isolation rules that his government sets for everyone else.

The only thing Johnson stands for is himself; it’s all about what will satisfy his own immediate needs. It’s not Johnsonism: it’s Onanism.