Safety Boost After A556 Platform Work

Drivers using the motorway network and other roads in Cheshire and Greater Manchester will benefit from safer journeys thanks to the Driver and Vehicle Standards Agency (DVSA) and a Highways England project along the A556 Knutsford to Bowdon bypass. 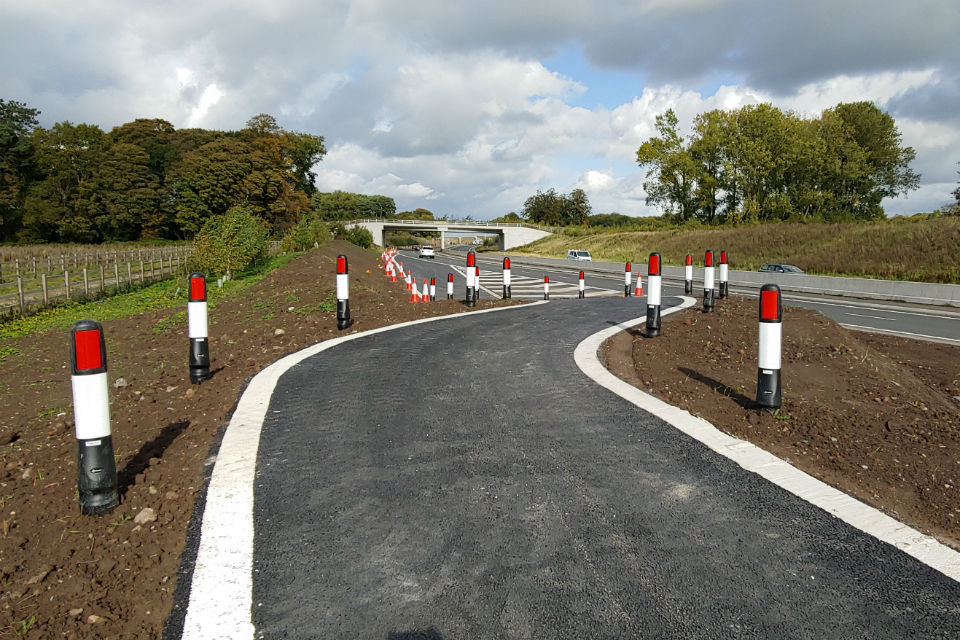 Highways England's new observation platform for DVSA and police officers alongside the northbound A556 in Cheshire
A new observation platform along the northbound carriageway of the A556 at Mere, just north of junction 19 of the M6, has been constructed by Highways England as part of its £43 million roundabout improvement at junction 19, just past Knutsford services.

While the M6 project is focused on installing a new road bridge through the junction roundabout and over the M6 – providing direct links with the A556 and tackling congestion – the construction team has also been looking to provide other improvements in the area.

The new platform – which will be used by DVSA officers to spot and intercept dangerous or illegally-operated lorries, vans and other commercial vehicles – complements other improvements in the area which Highways England has provided for the DVSA over the last few years, including a new vehicle checking site at the northern end of the new bypass at Bowdon. Police and Highways England traffic officers will also be able to use the new platform.

Highways England project manager Jamie Carruthers said:
“We’re always looking for opportunities to deliver other improvements to the road network whilst we are undertaking major projects. Given the proximity of our M6 junction project we realised we could also construct this platform for the DVSA.

“The safety of road users is a priority for Highways England and this new observation platform will allow the DVSA to target and remove dangerous or potentially dangerous lorries, vans, other commercial vehicles and their drivers from the road network.” 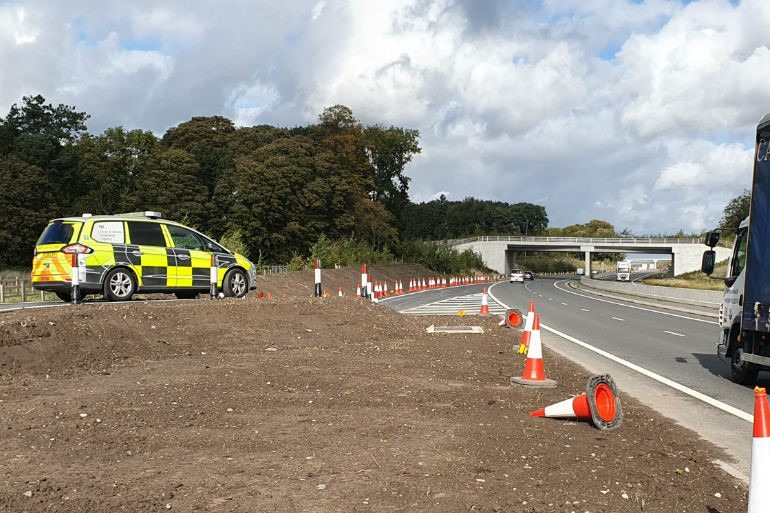 The platform is already being used by DVSA officers to monitor traffic on the dual carriageway
The DVSA is a sister organisation of Highways England in the Department for Transport ‘family’.

DVSA Enforcement Delivery Manager Steve Brougham said:
“DVSA’s priority is to protect everyone from unsafe drivers and vehicles. This new platform will help our examiners make the North West’s roads even safer.

“Working so closely with the police and Highways England is the best way to use public funds, and ensures non-compliant vehicles run a very real risk of being stopped and checked.”

The new observation platform will make it easier for DVSA officers to intercept suspect vehicles and escort them to the vehicle checking centre which completed shortly after the opening of the new bypass in March 2017. The old checking site was originally sited off the northbound A556 near the M56 but was moved into a purpose-built new facility within the island at Bowdon roundabout – a mile or so from the new observation platform. 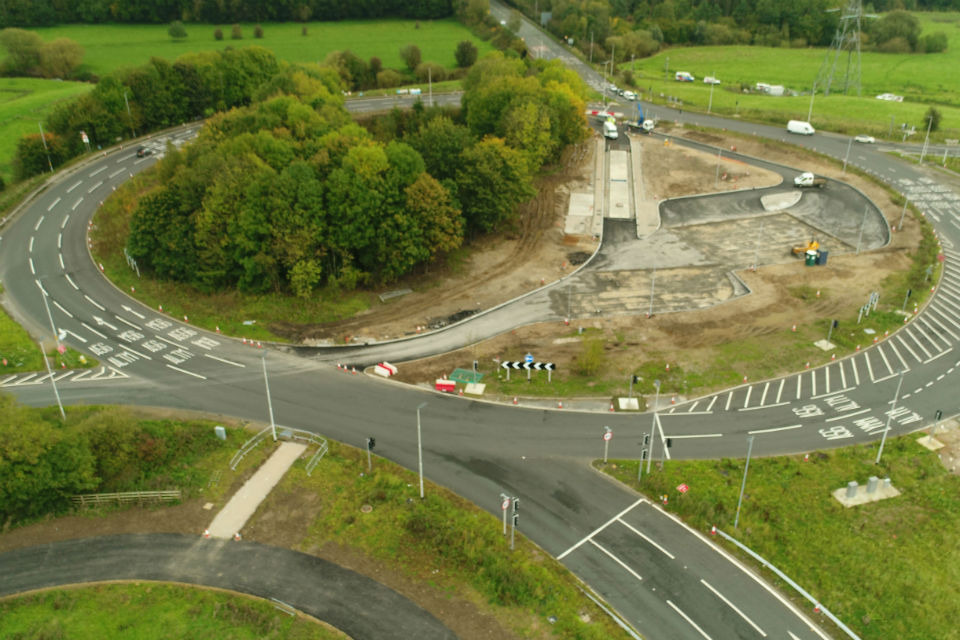 Aerial photograph of the new DVSA checking facility being developed within Bowdon roundabout during the construction of the new A556 bypass in 2016
Installation of the platform for the DVSA and police is just the latest example of Highways England working with partners to make the country’s motorways and major A roads safer by reducing the potential for breakdowns and collisions involving commercial vehicles.

Initiatives over the last five years have included:

High-profile Operation Tramline with Highways England providing police across the country with lorries to give officers an eye-level view of any illegal and dangerous behaviour by lorry drivers – anything from texting and watching videos to cooking meals when driving;
Providing police forces with equipment so they can carry out driver hours checks and reduce incidents caused by tired-driving;
Working with the Health and Safety Executive (HSE), DVSA and the police to better target insecure loads – shed load incidents are a major cause of delays as well as a danger to drivers with load ratchet straps dropped on carriageways also a common hazard;
Allowing Highways England traffic officer patrols to escort commercial vehicles off motorways to DVSA checking centres in a successful trial to increase DVSA checks an and interventions.


Highways England has supported the Operation Tramline initiative by providing several police forces with lorry cabs (pictured above) to support cab-level checks on drivers' behaviour
Work on the M6 junction 19 improvement itself is going well with the current focus on preparing the roundabout and motorway hard shoulders and central reservation for the installation of the bridge decks next year. More information including the opportunity to sign up for regular email updates is available from the project webpage at: https://highwaysengland.co.uk/projects/m6-junction-19/