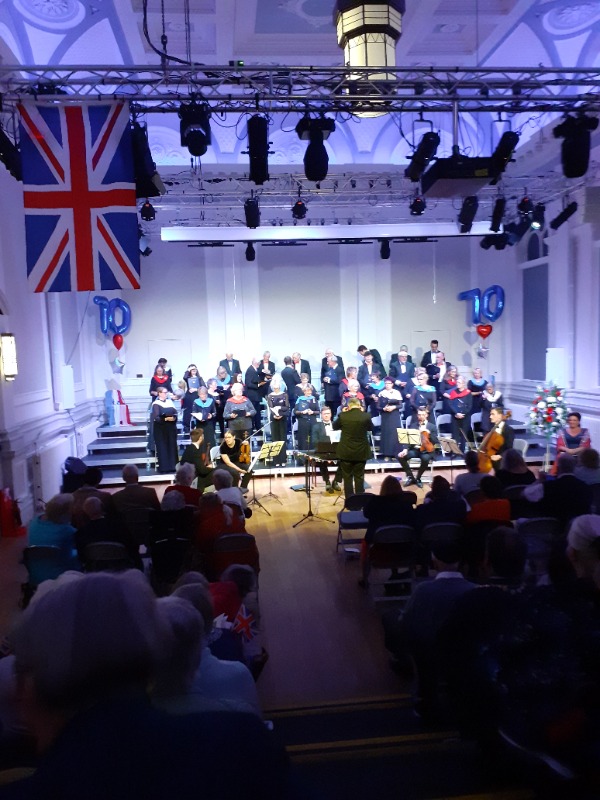 The moment at which all other considerations melted away, towards the end of Saturday night’s shimmering concert at Skipton Town Hall, was pivotal: collectively bearing the symbolic weight of a blue and yellow national flag, the ladies of the Voices of Craven joined with their male colleagues to deliver an emotionally-charged rendering of a Prayer for Ukraine. Immediately preceded by an exquisitely apposite, slow tempo version of Simon and Garfunkel’s Bridge Over Troubled Water, the moment spoke of the wider international community and of hope, in a building whose existence, as the Chairman of Craven District Council, Simon Myers, subsequently reminded us, embodies an indivisibility of commemoration and celebration. It will not have escaped his, or the choir’s, notice that the first group of refugees have been welcomed into Craven in recent weeks, for the ‘Prayer’ was performed with the reinforced gravitas that only serendipity can confer.

The sentiment was not misplaced in an evening of royal celebration, for charity and bridge-building have always been at the heart of the monarch’s mandate. Musical Director and Conductor Duncan Lloyd’s skilful curation of the programme book-ended the concert with two masterworks of anthem and oratorio – Handel’s Zadok the Priest and the Hallelujah Chorus from Messiah - and the light of the church’s armoured division was seen seamlessly to diffuse into the more nebulous purpose of obedience to the Crown. But royalist or no, both pieces were performed with rigorous authority, tempering declamatory power with a uniform sense of cohesion.

It was fitting that a spirit of affirmation should set the tone for the concert: the eclectic range of music on offer – from popular ballads, to stage musical medleys, to the unalloyed patriotism of popular early twentieth century classics – reflected a disparate complexity of attitudes that combine, sometimes in despite, to make a national grid of identity. By turns hugely upbeat, elegiac and witty, the selections could not have failed to animate an appreciative full house in the newly refurbished Town Hall.

And it was a brave, but brilliant, decision to juxtapose oratorio with Let’s Go Fly a Kite from Mary Poppins, and to follow the slapstick strains of When Father Painted the Parlour with Bridge Over Troubled Water, without somehow disrupting musical continuity. The quality of the singing pulled any caviling over the line; that the individual performers were so clearly enjoying their roles in the wider margin was abundantly visible throughout, not least when the male choristers donned flat caps for the hilarious duration of ‘When Father’.

A treat, too, to savour the rare opportunity of hearing Giggleswick’s own world-renowned soprano, Sarah Fox, take to the floor for several solo and accompanied pieces. Her skilled rendering of a trio of songs, including two from Kiss Me Kate, was heartbreaking, joyous and witheringly beautiful in equal measure. With an actor’s ability to distil a sense of pain through inflection, her stagecraft in the deeply affecting Miss Otis Regrets was a visceral reminder, also, of Cole Porter’s authorial brilliance. If her achingly languid delivery of Blow the Wind Southerly breathed a sense of regret into the oft aired song, then the vivacity of the Laudamus Te from Vivaldi’s Gloria, sung in an authoritative interplay of two voices with the cut glass Joan Horsfield of Voices of Craven, restored her near perfect diction and vocal clarity.

The choir and soloists were assuredly supported by the assiduously controlled attentions of the Vine String Quartet and guest accompanist, whose work-rate and endeavour in some of the more complex classical pieces – Fauré’s Cantique de Jean Racine and the richly embroidered How Lovely are Thy Dwellings from Movement 4 of A German Requiem by Brahms – gave body and weight to the choral drama unfolding behind them.

Formed as recently as 2015, the growth and development of Voices of Craven has been little short of exponential. Evidence, if evidence were necessary, that words, in the end, are all we have.

Voices of Craven, and the Vine Quartet, with Sarah Fox, appeared at Skipton Town Hall on Saturday, 4th June.
Also by Steve Whitaker...
Poem Of The Week: The Wireless By Jean StevensBurned By Light: Dovetailing - Gathered NotesNight Swimming:Towards A General Theory Of Love By Clare ShawPoem of the Week: 'Together' By Robert GibsonJubilee Poem Of The Week: 'The Patriarchs - An Elegy' By Simon Armitage