Review: The Litigators By John Grisham

John Grisham
My love for a Grisham continues and I thought it time to read another...

Although refreshingly humorous in tone, or at the very least tongue in cheek in places, the opening of this novel is a frighteningly real description of ‘the snap’ as experienced by David Zinc. For those of you who, like me, have never heard the term before, it is that moment when your mind snaps, the pressure becomes too great and, as in this case, you run. David Zinc, a Harvard graduate, runs from his high pressured (highly paid) job in a multi-million dollar, dog-eat-dog law firm and spends his first day of freedom finding release in several beers in Abner’s bar, and meeting the delightful cameo figure of the ninety six year old Miss Spence, who sits on the same stool each day and indulges in three Pearl Harbors each lunchtime. At the end of the day, he finds his way to the ambulance-chasing Finley & Figg, a law firm which tries to elevate its humble status by terming itself ‘boutique’, and is about as far removed from the one he has just left as you can imagine.

It seems that there his real law education, or at least experience, begins (Harvard Law School eat your heart out), since he has never been a litigator and finds himself in a courtroom for the first time - pitted against the most successful litigator his old firm employs. His case is weak and losing credibility rapidly, and for once the pharmaceutical company defendant is shown to be unjustly maligned as the drug in question is found not to be the cause of heart failure as first suspected. This is no spoiler, it becomes obvious from very early on, and you can’t help wondering how/if Finley & Figg will extricate themselves from the mess. 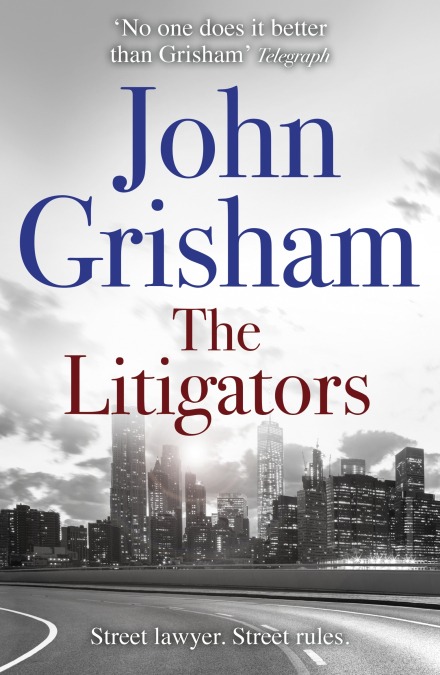 The tort war is one which Grisham has touched on before (not least in King of Torts) and he reprises his descriptions of the greed of industry bosses, the unscrupulous nature of the real tort lawyers and the dreams of the little man who thinks he can ‘make a buck’ on the coat-tails of ‘the big guys’. Of course, the plaintiffs are easily persuaded by talk of big bucks too and the promise of money - with lots of noughts - certainly talks.

As the big-time lawyers lose sight of the little man, David Zinc modestly but determinedly becomes the knight in shining armour. He is forced to dig deep to hold up the ailing firm of Finley & Figg in the badly-judged case brought against Varricks, a multi-million dollar pharmaceutical corporation, while doggedly pursuing a more personal case, in his own time.

Nice touches like the birth of Zinc’s first daughter Emma, remind you of what you can miss out on in pursuit of the big career and how your priorities may change. Zinc is the richer at the end of the novel, in ways money cannot buy.

This is Grisham’s twenty fifth novel and some critics saw it (when it was first published in 2011) as a breath of fresh air, suggesting that Grisham had perhaps become stale, going over old ground in a predictable fashion. Maybe I don’t see that because I generally read them some way apart. Although this lacks a degree of suspense, yet again his characters are carefully drawn, his knowledge of the law is uncompromised and his sympathy for the main protagonist on this occasion,seems almost personal. It will join the others on my shelf and I recommend it to anyone who enjoys a good legal drama.


The Litigators is published by Hodder.


Also by Artis-Ann ...
Review: A Street Cat Named Bob By James Bowen‘Things Are As They Are And Will End As They Must’: A Brief Affair By Margaret Leroy'You're My Favourite': Jane Eyre By Charlotte BrontëThere's Nothing Wrong With Being EclecticReview: The Prison Doctor By Dr. Amanda Brown