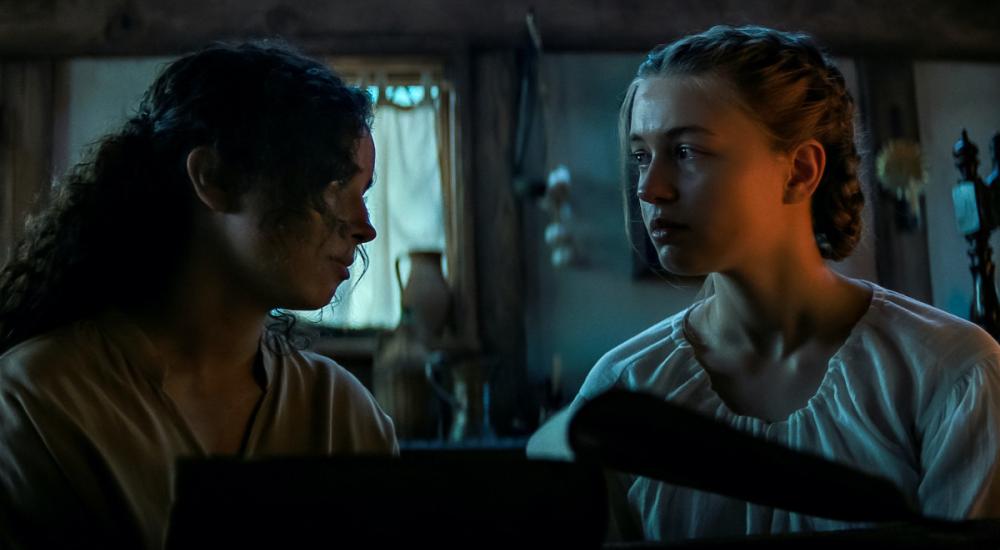 As we last left the second film in Leigh Janiak’s terrific horror trilogy for Netflix (adapted from the works of R. L. Stine), we had witnessed what went down in 1978 at the massacre at Camp Nightwing, and as Deena (Kiana Madeira) and her little brother Josh (Benjamin Flores Jr.) sought to reunite the bones of Sarah Fier (the witch executed in 1666, who has plagued the town of Shadyside ever since) and put an end to the centuries long curse, Deena was transported into the shoes of Fier way back in that fateful year.

It is from this intriguing point we pick up with this third and final instalment, Fear Street: Part Three - 1666, though technically you could call this parts 3 and 4, as this is like two films in one. The first, utilises the faces and cast we have come to be familiar with across the previous two chapters and puts Deena in the place of young woman Sarah Fier in 1666. Through her, she lives firsthand the real story and sees that true evil lies in far different places.

The second story, takes us back to the main overall wraparound narrative in 1994, as Deena’s horrifying but illuminating experience of seeing through Sarah’s eyes and feeling her pain, reveals the true villain of this accursed plot. With this knowledge, Deena and Josh, alongside Camp Nightwing survivor Christine “Ziggy” Berman (Gillian Jacobs) and wronged local man Martin (Darrell Britt-Gibson), seek once and for all to end the Shadyside curse, save Samantha (Olivia Scott Welch) from its dark embrace, and expose the true name that brought on this town, many centuries of suffering.

Fear Street: Part Three - 1666 is a very satisfying and rather ambitious finale to this well crafted trilogy. Part satirical slasher and part devilish period horror, this final film is like a slick blend of Robert Egger’s The Witch and Wes Craven’s Scream, and it is an unlikely but winning concoction.

This final chapter of the story, from screenwriters Janiak, Phil Graziadei and Kate Trefry, relishes in flipping our perceptions to show evil isn't always as it appears, in fact rarely is it in the people we expect. In portraying this idea, and in transfixing Deena and the diverse ‘94 and ‘78 arc cast members into these 1666 roles, it not only brings the trauma of this cruel and brutal history closer to home for Deena, as she feels the real Sarah’s (played in glimpses by Elizabeth Scopel) pain and injustice. But, it also makes a timely political point too, in showing the violent demonisation of difference and identities deemed outside the social norm.

The cast are excellent, showing their versatility, as many take on entirely different (albeit with elements of the same DNA) roles in this 1666 plotline. There is particularly fine work from Madeira and Welch, who are especially at the heart of the historical half of the plot. While an impressive Ashley Zukerman as local Solomon stands out amidst a fantastic supporting cast in this segment of the story. Meanwhile, in the 1994 chapter of the plot, Jacobs’ “Ziggy” is a scene stealing badass, while Britt-Gibson’s expanded role as Martin is a much welcome addition to the core cast we know and love.

Part historical horror origin and part full circle completion of the ongoing story, Fear Street: Part Three - 1666 is a brutal, powerful and beautifully constructed - and rather timely - final act to what has been a very entertaining horror trilogy treat, and if that credits tease is anything to go by, perhaps we are not done yet!

After all folks, evil never sleeps!