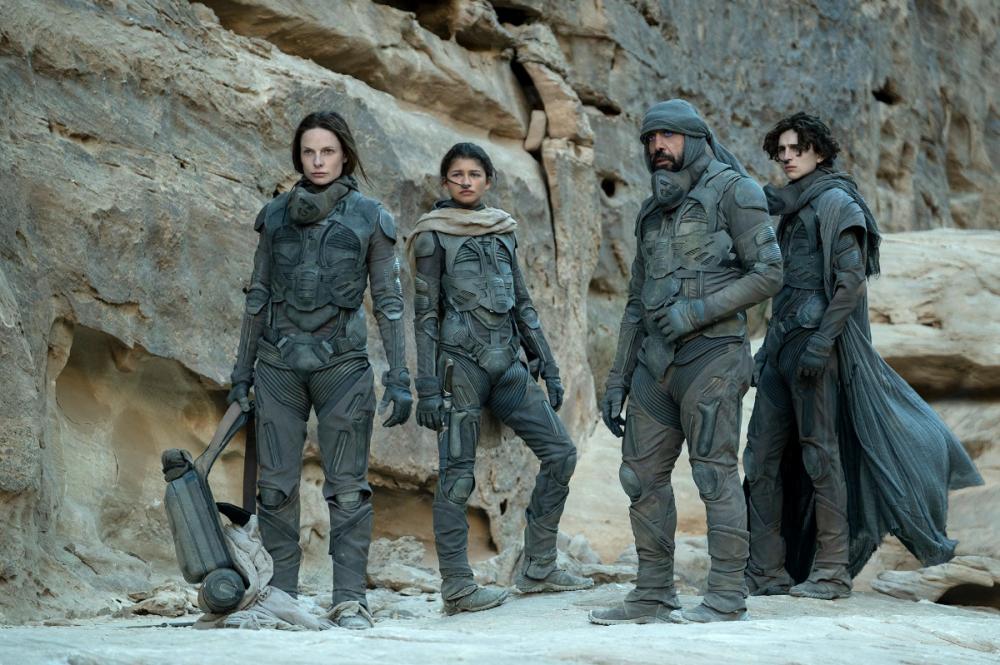 It has been said about a great many written stories that they are “unfilmable”. Some have remained that way, but others have managed to make it to the silver screen against all odds. Among this crop you can count the likes of Zack Snyder’s Watchmen, based on Alan Moore and Dave Gibbons’ influential graphic novel; The Wachowskis' and Tom Tykwer’s Cloud Atlas, based on David Mitchell’s vast book; and David Cronenberg’s Naked Lunch, based on William S. Burroughs’ challenging text. But these are examples of near impossible film adaptations that went right (at least in my opinion they are). What happens when they don’t? Well, fans of Frank Herbert’s 1965 novel Dune can give you an answer to that very question.

For years it has been a firmly held belief that we would never see a definitive cinematic vision that managed to do justice to Herbert’s sci-fi tome. Previously David Lynch tried in his famous 1984 failure, and prior to that film, directors Arthur P. Jacobs, Alejandro Jodorowsky, and Ridley Scott all tussled with the task and failed to bring their version to the big screen. Now, nearly four decades on from the previous attempt and sole big screen take on the story, Blade Runner 2049 director Denis Villeneuve unleashes part one of his two-part adaptation. And as the hype would suggest, he has likely managed the impossible, even if this first part undeniably feels like the table-setter and not the feast.

Set in the year 10,191, Dune is the story of Paul Atreides (Timothee Chalamet) of the noble House Atreides, who is struggling to interpret the increasing visions he has of a young woman, as his family head to the deadly desert world of Arrakis, where war is looming and destiny comes calling for this young man.

The various acclaim and awards may be quite the hype to live up to, and, undeniably for some, it won’t. But Dune is a seriously impressive cinematic event on many levels as Villeneuve has managed to do what no other has yet. His adaptation is very mature sci-fi art, delivered on an ambitiously grand stage, and at a very challenging time for the cinema medium.

That said, once you move aside all the McGuffin and fancy named lore, this is a rather simple story of destiny and prophecy, which revels unashamedly in its spectacle and transportive audiovisual power. Admittedly it takes its time and then some to establish Herbert's daunting world onscreen, and for some will be a punishingly slow experience, but I was invested and applaud the film not relying on exposition. Far from it, in fact.

For me it recalled in some ways Peter Jackson's The Hobbit: An Unexpected Journey in how it was essentially a groundwork-setter, awash in the mythology, and a primer for the bigger and better to come.

The ensemble cast were all great, though some got more of a narrative bite than others here (Zendeya, especially, is left waiting for her character’s importance to kick in), with the standouts being Oscar Isaac as Duke Leto Atreides, Jason Momoa as sword master warrior Duncan Idaho, and Stellan Skarsgard as the vile villain Baron Vladimir Harkonnen.

Aesthetically, Dune is a masterpiece, as Greig Fraser's astonishing cinematography manages to transfix the eyes in every frame, while Hans Zimmer’s exceptional and unique score compels the ears and at points raises the hairs on your arms in its soulful fury.

Even if overall this part one might arguably be a film to admire and respect more than utterly love, you have so much to take in, think about and visit in this amazingly realised craft. If I can liken it to Star Wars for a moment (as vastly different as they are), if this is '77's Star Wars, I cannot wait to see Villeneuve’s Empire Strikes Back!

Dune part one is a tremendous achievement in numerous ways and it is clear to me that the best is to arrive in 2023’s second chapter. Get ready.