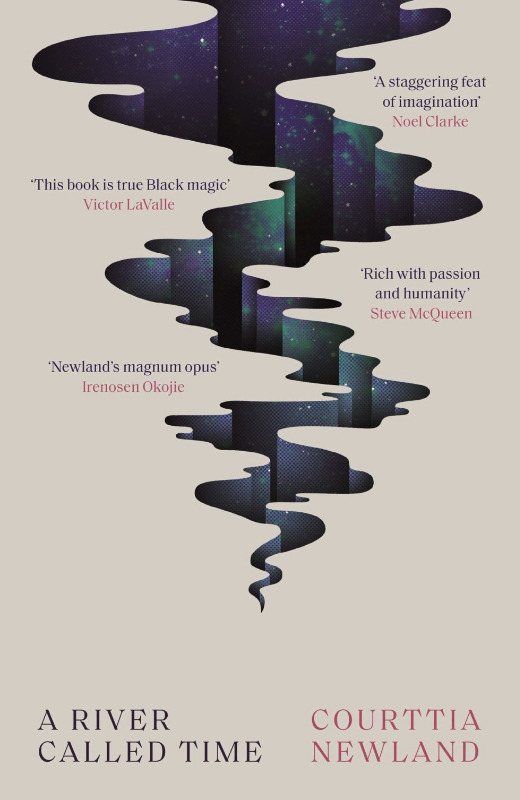 Courttia Newland’s debut novel, The Scholar was birthed to enormous acclaim. His latest novel A River Called Time was eighteen years in the making and is a truly epic bildungsroman come sociological touch stone, deriving its coruscating brilliance from astonishing intellectual rigour, meticulously rendered world-building and an imaginative scope only eclipsed by its polysemic richness and profoundly absorbing narrative.

Brobdingnagian in breadth, and pharaonic in thematic complexity, Newland’s novel seamlessly melds a multiplicity of genres to achieve his diegetic aims, eschewing didactic pontification for relatability and humanistic potency. Though not an example of experimental fiction, his novel is breathtakingly original in terms of its style, structure and creative ambition. Fortunately, Newland’s talent matches the profundity of his remarkable vision, compassion and artistic courage.

Though Newland has conjured up jarringly dystopian futuristic realms suffused with Kemetic philosophy, magical realism, mysticism and Afro-futurism, his first authorial venture into the science fiction genre is deeply rooted in a principle understood by Barnaby Perkins: ‘In literary terms, acceptance of diegesis is the process that takes place when a reader willingly suspends incredulity in order to enter fully into the enjoyment of the narrative. In other words, no matter how fantastic, it will draw the reader in, and credulity will prevail’.

At the risk of pandering to artistic fallacy, establishing our author’s objectives before describing his novel’s plot is helpful when engaging with a plot so complex as to risk becoming a magical megillah. Newland set out to write a novel set in a parallel world in which the transatlantic slave trade, colonialisation and the genocide of Maafa had not taken place. Europeans would treat Africa as the ancient Greeks once treated Kemet, seeking not possession of land or treasures, but knowledge. African cosmology would be seen as the dominant global religion.

Transcendental meditation, astral projection, ancestor veneration and a quasi-paganistic respect for natural forces are as normal an ideology or paradigm as capitalism is today. Newland intended to liberate himself from a colonial mindset, race-fixation and the white-washing of his own identity. En passant, he would explore his themes unencumbered by unconscious bias or restricted thinking, allowing unclouded indignation to expose and eviscerate fundamental, humanistic injustice and inequality.

Markriss Denny, our chief protagonist, lives in Dinium, a futuristic city modelled upon present day London. Unlike our contemporary capital, its populace has survived the ‘War of Light’ which had devastated all in its path, an enormous electromagnetic pulse creating a vast wasteland known as ‘the Blin’. Dinium is callously divided into zones, the Outer City and the Inner City. Within the Inner City, the vast monolith of The Ark rising miles into the sky and houses those fortunate to inhabit its climate-controlled haven.

However, The Ark itself is a ‘rich person’s heaven, poor person’s hell’ and as anthropologically carcinogenic as it is impregnable and autocratically powerful. The sanctuary of this gargantuan self-contained construction is available to a select few. ‘ …the Ark was no more than a single conglomerate company’. Oppressive ‘Corp’ storm troopers ruthlessly crush all insurrection in response to the gross inequalities practised upon them by the Ark’s heinous ruling elite. ‘Inside the city there was no one to regulate how business was done or bring anyone to task for foul practice’.
.
Markriss, by dint of his intellect and journalistic competence, earns passage into the Ark’s lower environs and joins its denizens as a reporter for Ark Light, the official news channel owned and operated by the elite controlling the Ark itself. Markriss soon finds himself embroiled in an epic fight for equality and freedom spanning multiple alternate astral planes, each the consequence of the cultural and spiritual paradigms informing and articulating their zeitgeists. Guided only by the esoteric and often procataleptic musings of a chimeric mystical elder, Markriss, a spiritual tyro, navigates multiple interconnected realities in search of phronesis, self-actuated purpose and the eradication of forces deleterious to all but those who control them.

The eldritch, almost phantasmagorical ambience of his various incarnations are all grounded in and caparison the gritty realism of disenfranchised oppression, societal fragmentation and dystopian menace he encounters. We witness gang warfare, virtual enslavement in the name of capitalistic ideologies, covert insurrection and spiritual transmogrification. As Markriss encounters each new reality, cryptomnesia hounds his understandings, whilst also enabling him to evolve spiritually and embrace the authenticity of his Being and unfettered conscience. The novel’s conflict stems not from society’s battles with institutionalised elitism, but from the battle between Markriss’s conscience and his will to act upon moral imperatives. 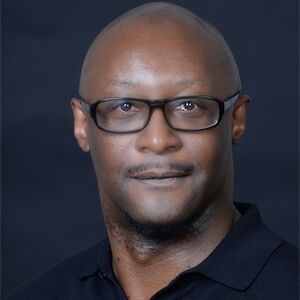 Courttia Newland
Newland draws upon hybridity, futurology and the unsettling power of the familiar made unfamiliar, reminding me of iconic writers such as Philip K. Dick and J.G. Ballard. Octavia Butler’s Bloodchild and the Xenogenesis Trilogy come to mind as we swim through time, cast as river, ‘ a glimmering universe, dark matter rippling with constant motion’. John Lanchester’s The Wall though excellent, pales in comparison with Newland’s imagined realms.

Markriss shares a passing synergy with the Wachowskis’ Neo of Matrix fame, in that both are prisoners of technology rendering them virtual automatons until an awakening and the discovery of physics defying capabilities. The 1998 neo-noir film Dark City, directed by Alex Proyas presented itself to my mind, as Newland confronts his readers with orchestrated realities, artificial diurnal cycles and malevolent forces deforming reality to serve nefarious self-interest.

For this reader, H.G. Wells inhabits the novel’s vividly dystopian pages. The Time Machine, The Sleeper Awakes and After the Comet all gave Newland’s authorial substructure palpable force. However, though he exploits magical realism, the novel’s finest glory is his use of Afro-futurism, or African Futurism as he prefers to refer it. Exploring the intersection of the African diaspora and technology, this genre directly confronts elitist injustice. The term was coined in 1993 by Mark Dery and signifies not just an aesthetic, but a philosophy of both science and history. In Newland’s deft hands, the genre has become the perfect vehicle to navigate his questions of identity and social justice, whilst also addressing the pernicious societal evils threatening our contemporary reality.

Ancient Egyptian Kemeticism, the laws of Maat and principles of quantum physics run through the narrative like the metaphorical veins of a body, animating the multi-dimensional story with the life force bringing its imagined worlds to life. For me, the esotericism of astral projection counterpointed with the exquisitely rendered shibboleths and rituals of ancient metaphysical practices, gives the novel a mystical, yet visceral weight.

Newland moves beyond the dry constraints of phenomenology, leaping over Husserl, Heidegger, Sartre and Maurice Merleau-Ponty to explore Cartesian conundrums, albeit without direct reference. His interest sits not with desiccated, cerebral philosophy, but with African culture and its deeply humanistic truths.

L’autre casts its shadow over the novel’s soul, however as a societal or political exploration of inequity as rampant force of evil, it is possible to read Newland’s novel as a brutal evisceration of anarcho-capitalism and the blight of neo-liberalist rapacity. Ultimately, any system of elitism presupposing the disenfranchisement of individual liberty and wellbeing is rightly characterised as inimical to the eudaimonia of all. Such vile mentalities and the pullulated sins they cause destroy the fabric of society and create nothing but division and suffering. Newland has used his novel to out vile injustice and graphically demonstrate the perils of a somnambulistic acceptance of unfairness in all its forms.


Also by Paul Spalding-Mulcock...
'We Shall Be Forgotten' : In The Palace Of Flowers By Victoria Princewill‘Grief Can Make People See Things In A Very Odd Light’ : Body On The Island By Victoria DowdIt's All Greek To Me !An Interview with Alice Ash - Author of Paradise Block‘ …Really Real Poor People, Surviving Alone Together’: Paradise Block By Alice Ash
Beyond the novel’s ideological architecture, Newland has drawn upon a cornucopia of literary devices to lend his work real emotive force. We have a narrative in four parts, the frame story of Part One segueing into the interdependent vignettes that flow from it. We have the careful use of analepsis and prolepsis, intertextuality to provide intellectual context and a creative reinvention of Northrop Frye’s dramatic structure. By grounding his penultimate chapter in own contemporary epoch, Newland confers frightening force upon his imagined alternate realities, leaving the reader in no doubt that our choices author our fate.

Dialogue benefits from breviloquence and the employment of paratactic exchanges between protagonists. This lends the novel’s gritty realism verisimilitude and acting as an aesthetic foil to passages that almost rise to the lyrical. The descriptions of astral projection rival the prose of H.G. Wells as he describes his time traveller’s journey to the death of the sun. What particularly struck me was Newland’s ability to shift through prose form gears, his dextrous handling of language itself.

Symbolism is harnessed with aplomb. The ‘Ark’ and its ‘Levels’, and time itself as a multidimensional river, grant the novel a vibrant spectrum of almost tangible, haptic power. Motifs are used to create rhythm and clarify meanings. Our senses are nourished by dint of calculated patterns and the tropes that signify them.

Characterisation is another of the novel’s great gems. He has mastered the use of both dynamic and static personages to populate his tale, understanding the need for E.M. Forster’s ‘Round and Flat’ dramatis personae. Markriss, though re-invented several times, is drawn with granular care. I suspect that Newland transposed much of himself onto his chief protagonist, including his backstory and predilection for riding his bike through streets poisoned by uncloaked racism and bigotry. I also suspect that Newland has shared many of Markriss’s ugly experiences and consequently developed a love for community, social justice, ethnic authenticity and the need for untrammelled principles and courage. Markriss’s journey may well be a beacon of hope offered to mankind, wherever intolerance and elitism perdure.

The single most effective device utilised by Newland is world-building. Science fiction, however vividly imagined, often becomes holed below the plimsoll line by insouciance on the part of the author. The devil is in the details, and especially in their absence. Newland has left nothing to chance. His fictional worlds are crafted with infinite skill and more importantly, an imperative to provide not a simulacrum of reality, but reality itself albeit as envisioned by an exceptionally fecund mind.

Ultimately, A River Called Time explores the clash between personal conscience and neo-liberalist spawned inequities. It fires both barrels at institutionally corrupted journalism, promulgating a plethora of canards designed to oppress, not enlighten or empower. ‘Truth is freedom’… Newland has forced his reader to confront the sin of complicity, whilst acknowledging that we all have a role to play in vanquishing intolerance and prejudice, lest we wish to invite a dystopian future gestated by our own lassitude and unwillingness to challenge inequity. All connected and all free, unless intolerance and elitist oppression are allowed to take that which is every individual’s right…dignity and freedom from societal abuse. An unadulterated gem and for me, an imaginative, provocative masterpiece!


A River Called Time is published by Canongate