Formula 1’s sole three day pre-season test ended yesterday evening in Bahrain and it was Red Bull’s Max Verstappen who set the fastest overall time. As always though, it should be noted that testing times can be deceptive due to all the variable factors involved and potential sandbagging. It represented a great start for the Milton Keynes based team though, but we will only get a better idea about every team and every driver’s true pace come the opening Grand Prix in two weeks’ time at the same venue, with Mercedes still the favourites to claim both titles for an eighth year running. 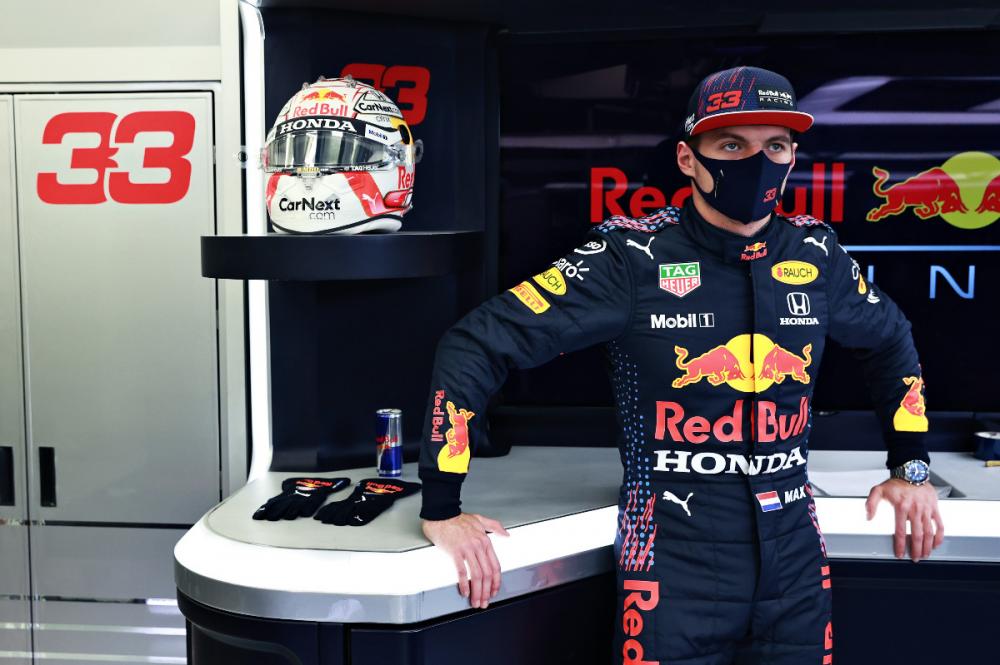 Red Bull’s Max Verstappen is hoping to take the fight to Mercedes this season
Verstappen had kicked off his season in style on Friday’s opening day, topping the timesheets and completing a mighty 138 laps. The best of the rest honours were earned by Lando Norris in his McLaren, with the now Mercedes powered car bringing back memories of previous McLaren Mercedes successes. Daniel Ricciardo had gone fastest in the same car during the morning session. Just a tad slower than Verstappen and Norris were Alpine’s Esteban Ocon and Lance Stroll in his Aston Martin. Stroll’s new team-mate Sebastian Vettel had posted the seventh fastest time during the morning session, but ended up 13th overall.

A sandstorm after the lunchbreak made conditions very challenging for a while, but it didn’t stow the action for long. It was great to see a Schumacher back in F1 action as Mick (son of the legendary Michael) and Nikita Mazepin made their debuts for Haas, although the former lost running time when the Ferrari gearbox in his VF-21 had to be changed, limiting the young German to just 15 laps. Yuki Tsunoda also made his debut in the AlphaTauri and the 20 year old from Japan will be a welcome addition to the F1 grid if he can replicate the exciting form he showed in Formula 2 last year. 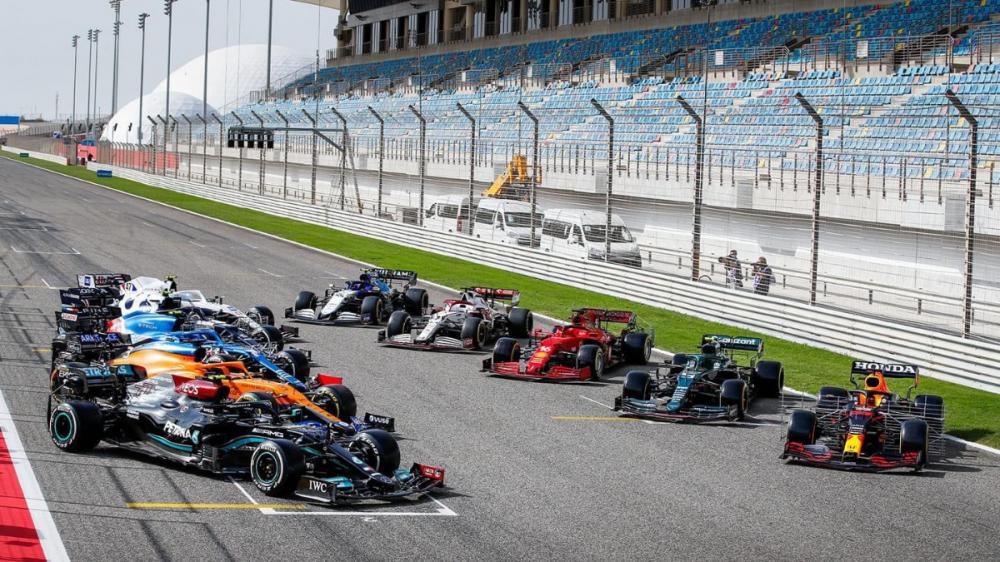 The ten teams lined up their new cars on the grid before the test began
Mercedes endured a difficult start to its title defences, with Valtteri Bottas suffering gearshift woes on the new car’s very first lap of the day, forcing the gearbox to be changed. The Finn had to sit out most of the morning session until reappearing with 40 minutes remaining, but he only completed a miserly six laps, a situation which left him as the slowest driver of the day, over six seconds adrift of Verstappen. His team-mate Sir Lewis Hamilton was on duty for the afternoon session and fared a little better, completing 42 laps but still only setting the 10th fastest time of the day.

Ferrari’s Carlos Sainz and Charles Leclerc finished fifth and 11th quickest, with the latter forcing red flags near the end of the morning period as his SF21 ground to a halt on track with a small combustion anomaly,

Conditions were still somewhat dusty and windy as the second testing day began on Saturday morning and McLaren’s Ricciardo again went fastest, just as he had done during the previous morning, ending up 9th quickest overall after the afternoon session. 39 year old Fernando Alonso climbed into the cockpit of his Alpine car and proved he still very much has pace as he proceeded to set the second quickest time of the morning period, followed by Sergio Pérez as the Mexican made his Red Bull debut. 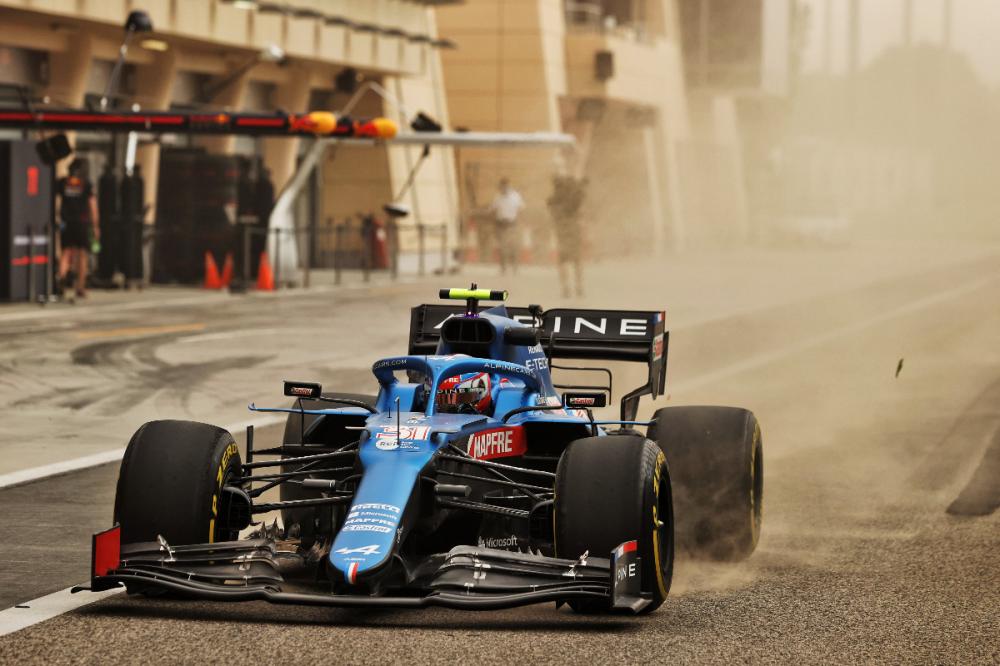 The Bahraini sand made grip levels challenging at times
Hamilton lost track time after losing control of the rear of his W12 at Turn 13 half way through the morning’s running, sliding backwards into a gravel trap and becoming beached. As a result red flags flew for 15 minutes whilst his stranded car was recovered to the pits. The reigning champion did at least fit in a total of 58 laps before the lunchbreak, if only posting the eighth fastest time. Better was to follow for the Brackley based team though as, after Hamilton had handed the car over to his team-mate just under an hour into the afternoon session, Bottas proceeded to set the quickest time of the day ahead of AlphaTauri’s Pierre Gasly. Hamilton though ended up as the slowest but one of the sixteen drivers who had taken to the track.

Amidst all the optimism surrounding the return of an Aston Martin team to F1 after an absence of 61 years Vettel had an even worse morning than Hamilton, being forced to sit out most of the session due to a Mercedes gearbox issue and setting the slowest time during his 10 laps of running. Aston spirits were lifted later on though as the repaired car went third fastest in the hands of Stroll, just 0.171s shy of Bottas’ best effort. Meanwhile, Norris impressed again as his flying McLaren set the fourth fastest time of the day. 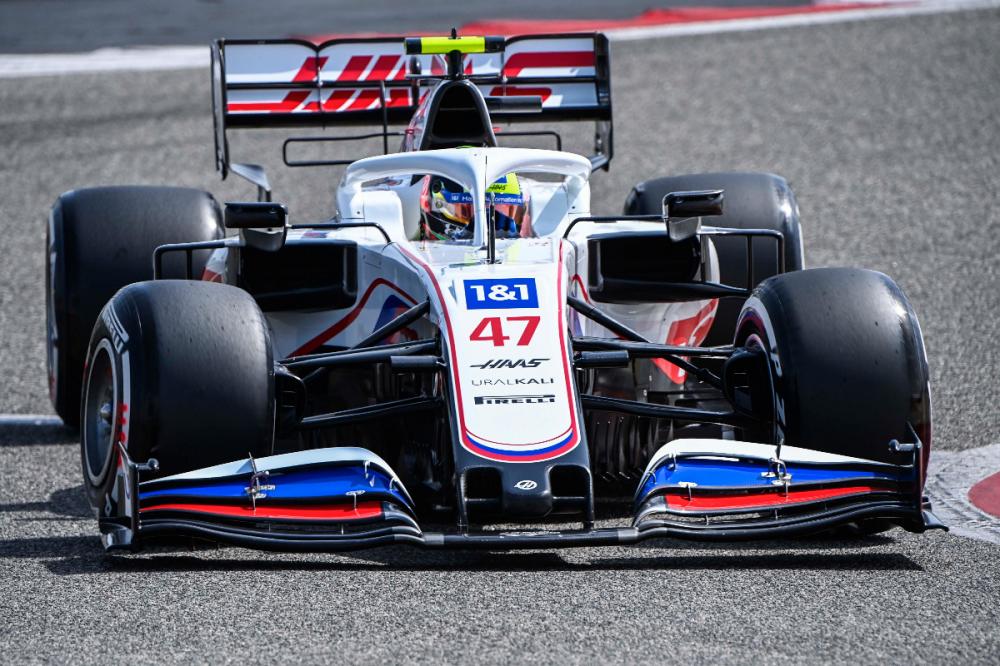 It was great to see the Schumacher name return in the form of Michael’s son Mick
Also by Graham Read...
A McLaren 1-2 In Italy As Hamilton And Verstappen Crash OutRussell To Mercedes And Bottas To Alfa RomeoVerstappen Delivers At A Very Orange Zandvoort!Verstappen Wins At A Very Wet Spa As Russell StarsYorkshire Based United Autosports Finish 9th Overall And Fourth In Class At Le Mans
In Sunday’s final morning session most teams concentrated on longer runs, with many drivers completing more laps than a Grand Prix distance. As George Russell made his first 2021 appearance for Williams it was Pérez who set the fastest time ahead of Leclerc. Following the lunchbreak the last session of the three days began and, as it headed towards its conclusion, the times started to tumble and Verstappen set a 1m28.960s, which bettered anything previously seen. Tsunoda certainly belied his rookie status as he also very much caught the eye, setting the second best time of the whole test ahead of Sainz’s Ferrari and the Alfa Romeo of the veteran Kimi Räikkönen. These four drivers proved to be the only ones to dip below the 1m30s mark at any stage of the test, with Vettel and Stroll propping up Sunday’s timesheet as their Aston Martin team opted not to seek competitive times.

So that’s pre-season testing concluded and the next ontrack action will come a week on Friday when the cars take to the Bahrain circuit again for the opening free practice session of the first Grand Prix weekend on the 23 race 2021 calendar. Bring it on.