Queensbury Tunnel: Now Is The Time For Government Action 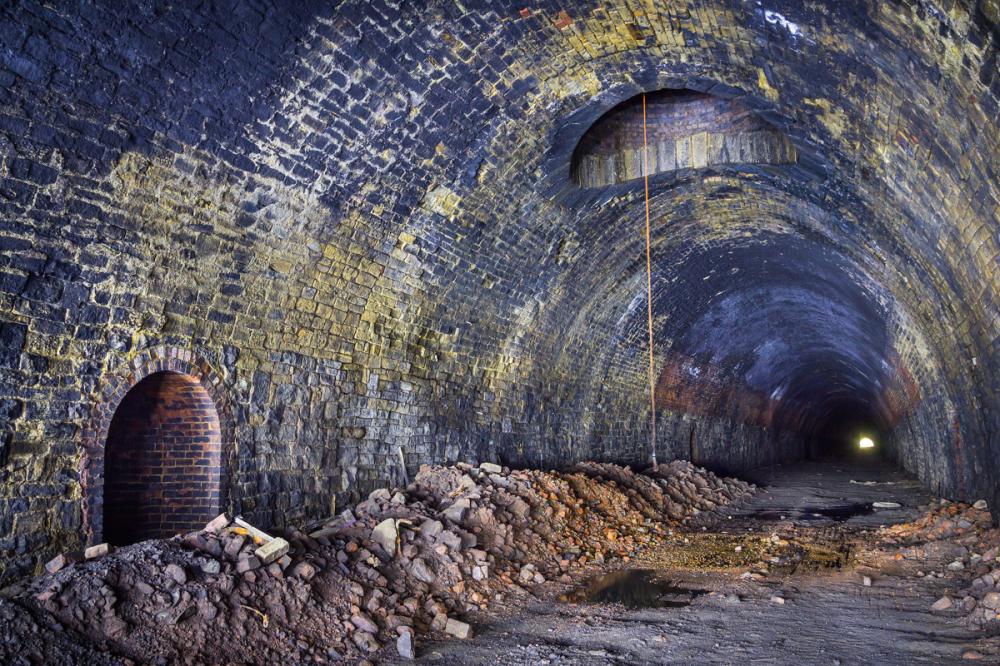 Queensbury Tunnel. Photo by Forgotten Relics
The long and increasingly bitter dispute about the future of the Queensbury Tunnel and its potential role as a centrepiece for a cycle network connecting Halifax to Bradford and Keighley rumbles on.

In the continuing saga the Queensbury Tunnel Society has said "A Minister [Baroness Vere] has criticised a landowner for not pumping water out of a flooded Victorian tunnel despite the Department for Transport twice rejecting his offers to do so."

In reply Highways England comments: "Highways England would need to be able to undertake the stabilising works without the threat of the pump being turned off at any moment should their professional view not be wholly in line with the landowner’s agent."

The Minster's intervention came as campaigners await the findings of two Government-funded studies - due at the end of March - into technical options for repairing Queensbury Tunnel in West Yorkshire and the feasibility of developing a Bradford-Halifax Greenway incorporating the 1.4-mile long passageway.

Ignorant of the facts?

Graeme Bickerdike, Engineering Coordinator for the Queensbury Tunnel Society, said: “Baroness Vere seems to be ignorant of the facts. The landowner has no right to unilaterally activate equipment that he does not own, is not located on his property and is powered by electricity he does not pay for. He would require specific written authorisation from Highways England.

“Furthermore, restarting the pumps would result in the rapid drawdown of water through the tunnel lining, with the potential to impact on its condition. We assume that Highways England - as a responsible asset manager - would wish to have input into the rate at which the water was removed.

Landowner David Sunderland said: “Twice now I’ve offered to restart the pumps but they’ve supposedly rejected both offers, although they’ve never bothered to inform me or let me know why. Now this Minister is criticising me for not restarting the pumps which I can’t do without permission and won’t do without a legal agreement in place.

He Said, She Said

David Sunderland continued: “The only real condition I’ve mentioned is that the works must not prejudice the tunnel’s reopening - so no infilling and no abandonment works. I’ve offered talks but they’ve ignored that. This Minister says she wants to see inspections and repairs. That’s fine - they just need to ask, but they never have.

“All I want is a clear written commitment from Highways England and the DfT that they wouldn’t use dewatering as a chance to destroy the community’s hopes for the tunnel once and for all. [The tunnel is] an outstanding feat of engineering and must be used for public benefit; that’s what ten men died building it for.


In June 2017 Sustrans completed a major study of the proposed Greenway connecting Bradford and Halifax, including reinstating the Queensbury Tunnel. The study included a range of estimates for the cost of reinstating the tunnel but all concluded that the 30 year return on health benefits outweighed the costs - possibly by a factor of 2.3.

In an effort to stop the abandonment of the route the Queensbury Tunnel campaign group has pitted itself directly against Highways England. Their stated headline aim is:

"To ensure that the tunnel's custodian, Highways England's Historical Railways Estate (HRE), is not allowed to spend £7 million of public money abandoning a strategically valuable piece of infrastructure."


Also by Richard Trinder...
The Benefits Of PerseveranceThe Filthy Rich Are Destroying The World!Make America Grate AgainJust Biden My TimeGreen Shoots Of Recovery
But surely this is taking aim at the wrong target. This constant game of "he said", she said" is going nowhere. Highways England has no authority to either destroy or reinstate the tunnel. They are merely tools of a higher authority. It is the Government in the guise of the Department for Transport that could, with the merest political whim, entirely fund the restoration project leaving Highways England and the Queensbury Tunnel Society on the same side of the debate.

If "Build Back Better", "Northern Powerhouse" and "Rebalancing the Country" have any meaning other than rhetoric then surely the creation of a extensive cycle route, the restoration of a heritage construction, and the projected long term health benefits for the region should be an easy target for a Government flapping around looking for iconic ventures that demonstrate their commitment to the North. This is prime 'red wall' territory after all.

Surely now is the time for the Government to act; to act decisively and to grab a quick win. The case for the tunnel has been well made and, frankly, looks pitifully cheap compared to the £27 billion the Chancellor has committed to building 4000 miles of roads over the next five years. Why not decide right now to fully fund the project and let all parties start the process of building back better?