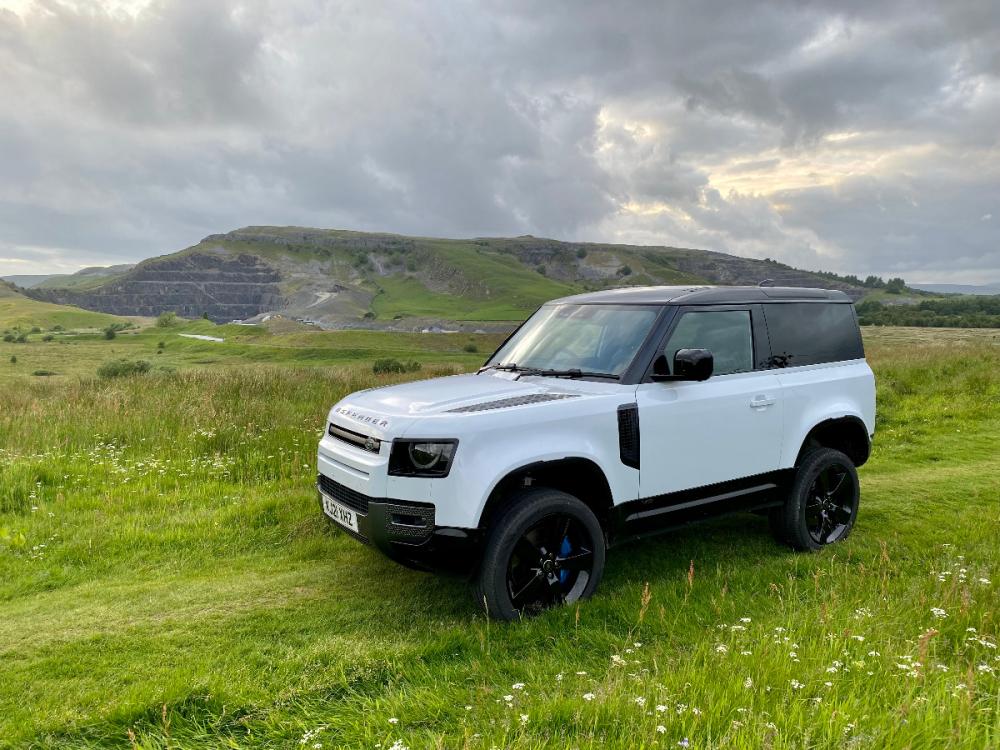 I was lucky enough to have a new Defender 90 on test last year. Powered by a 3.0-litre diesel engine, it had performance aplenty, yet returned 30mpg on test.

Subjected to a day’s hardcore off-roading, it tackled everything thrown at it with ease, the clever ‘Terrain Response’ system working overtime. It truly impressed.

I am quite sure the petrol V8 powered Defender that recently came to stay would have been just as capable, but at a smidgen under £100,000 and with rather smart 22-inch gloss black alloy wheels, I concluded road miles were more likely to be its forte. 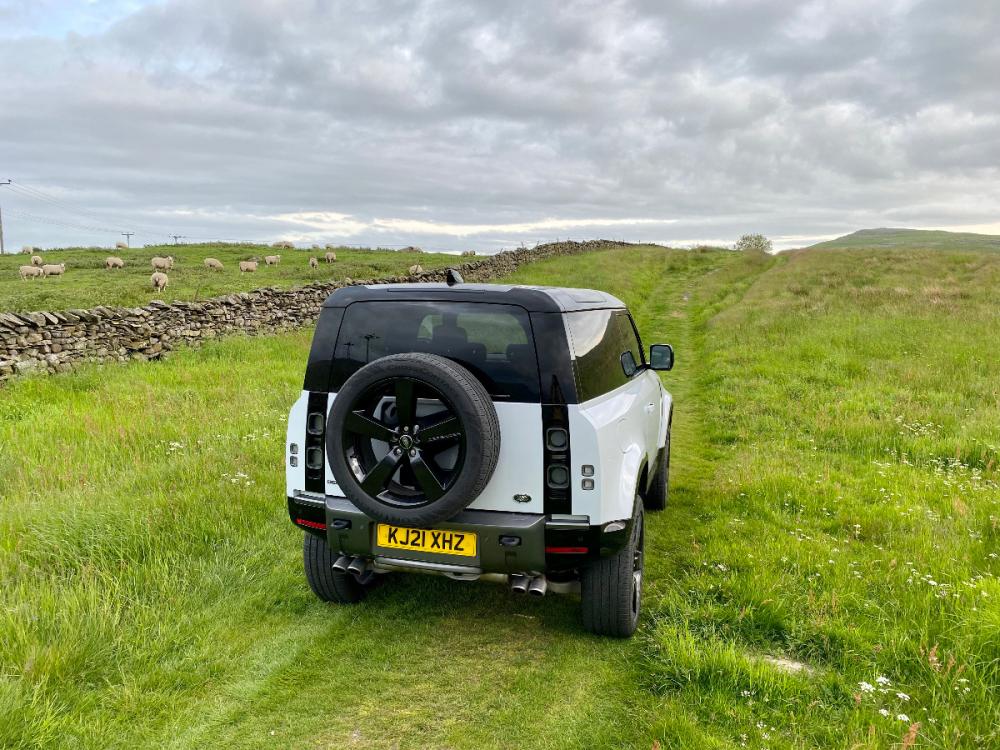 With a few days in Northumberland in the pipeline, followed by a wedding in London and then a trip to Bicester Heritage, this was to be a test of refinement, comfort, and usability.


So, let’s get all the facts and figures out of the way first: 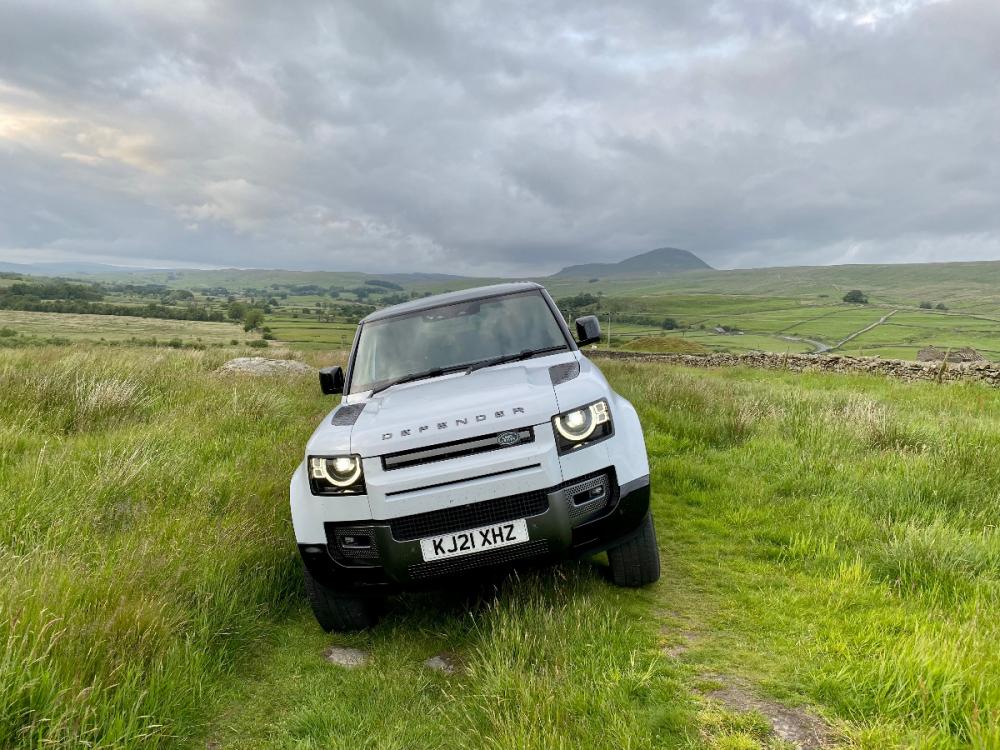 I covered over 700 miles during the 10 days I had the Defender, and it was somewhat painful on the wallet. The trip computer recorded circa 20mpg, whether on a gentle motorway cruise, or having some fun on a favourite B-road. Driving style seemed to make little if any difference.

Considering the Defender is no lightweight, performance from that powerful engine was somewhat exhilarating and using that power was certainly addictive. Excellent traction, a given of course, and a smooth automatic gearbox add to the driving experience.

High-speed cruising was pleasantly hushed, the ride yielding yet not to the detriment of cornering prowess. Chuck the Defender at a series of challenging bends and it coped admirably, almost defying its blunt shape and high centre of gravity. The steering was nicely weighted too.

I left the Defender parked in the suburbs of North London, resisting the urge to take it into Central London and thus enraging Mayor Khan and his green zealots. It was missed, as in 30 degree heat the underground was most unpleasant. At the day’s end it was a delight to be once again ensconced in the Defender’s climate-controlled cabin, the glass panoramic sunroof wide open to the elements. 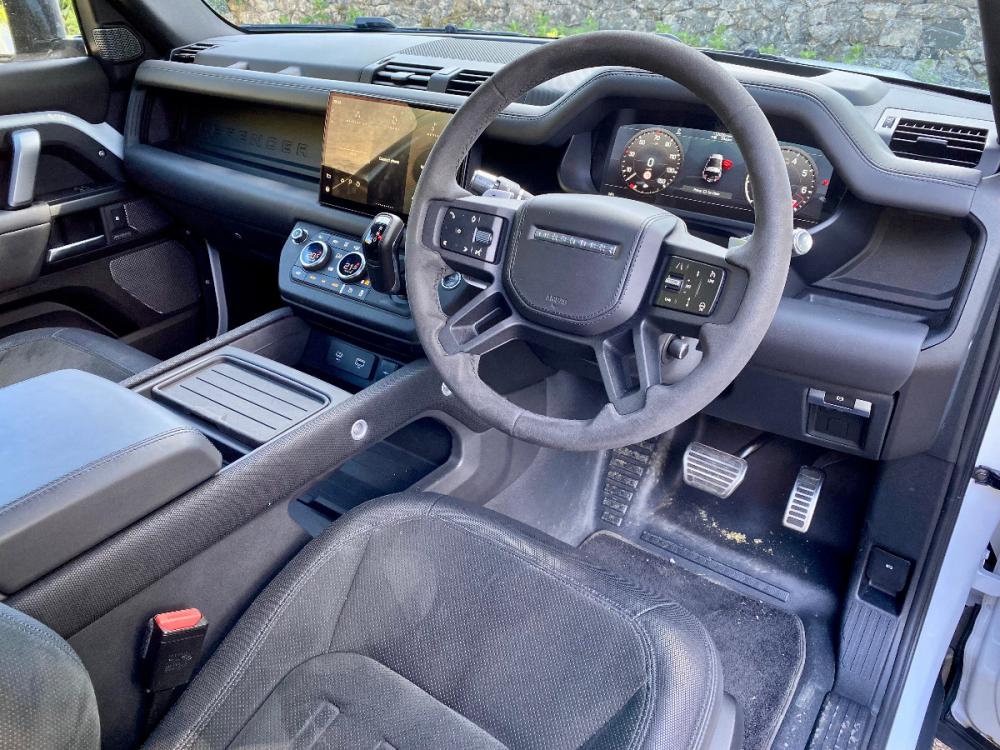 In short-wheelbase form, the Defender boasts plenty of space for four or five adults to travel in comfort and access to the rear perches is reasonably easy. Buttons on the front seats allow them to slide forward, though they do take a little time. 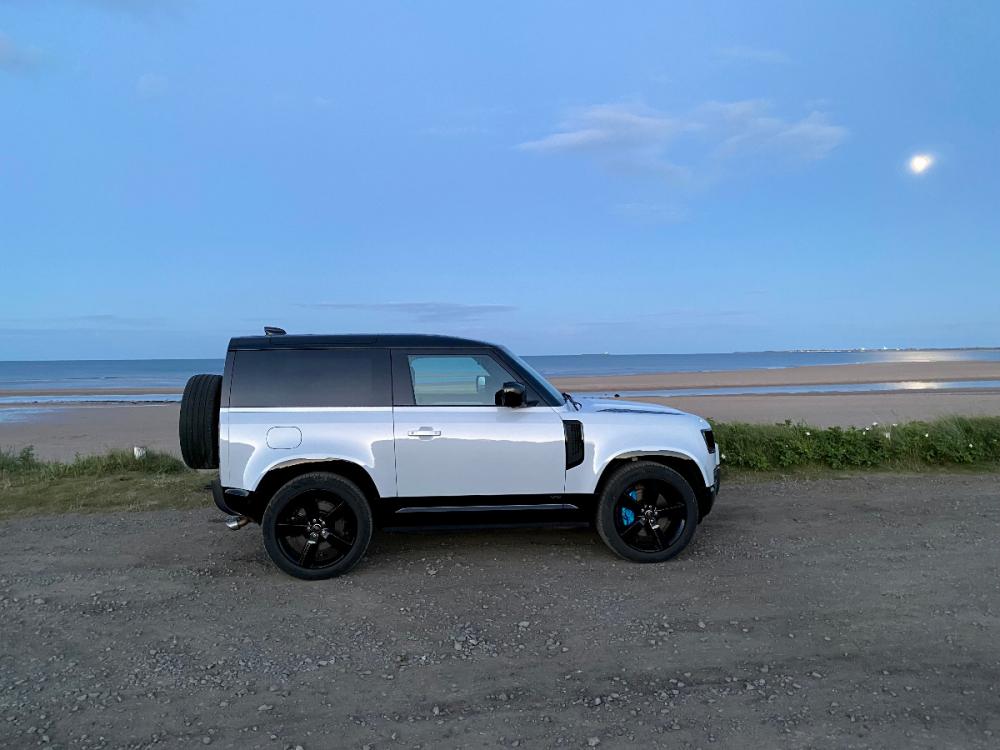 Boot space is modest, so those in need of extra space will doubtless be drawn to the longer and more practical Defender 110, or indeed the soon to be released Defender 130, with space to carry eight passengers.

A jump seat is an option at £815, but it was not fitted to the test car. Kids will love it and when not in use it can be folded down to make a comfortable armrest for the driver and front seat passenger. A worthy option I would suggest.

Ensuring that rear visibility is not compromised, the ‘ClearSight’ interior rear-view mirror uses a camera to show what is behind. It gives a wide-angled view but does take some getting used to.

Whilst not exactly a hose out interior, wipe clean plastics and rubber floor mats should be easy to clean.

The 14-way heated and cooled memory front seats proved to be extremely comfortable, with many long hours at the wheel being accomplished without complaint from my ageing body.

All the latest tech is fitted as standard in this top model, with the 10-inch Pivi Pro touchscreen proving intuitive to use and quick to respond. The adaptive cruise control helped take some of the strain out of the long motorway slogs and proved to be less nervy than some systems. 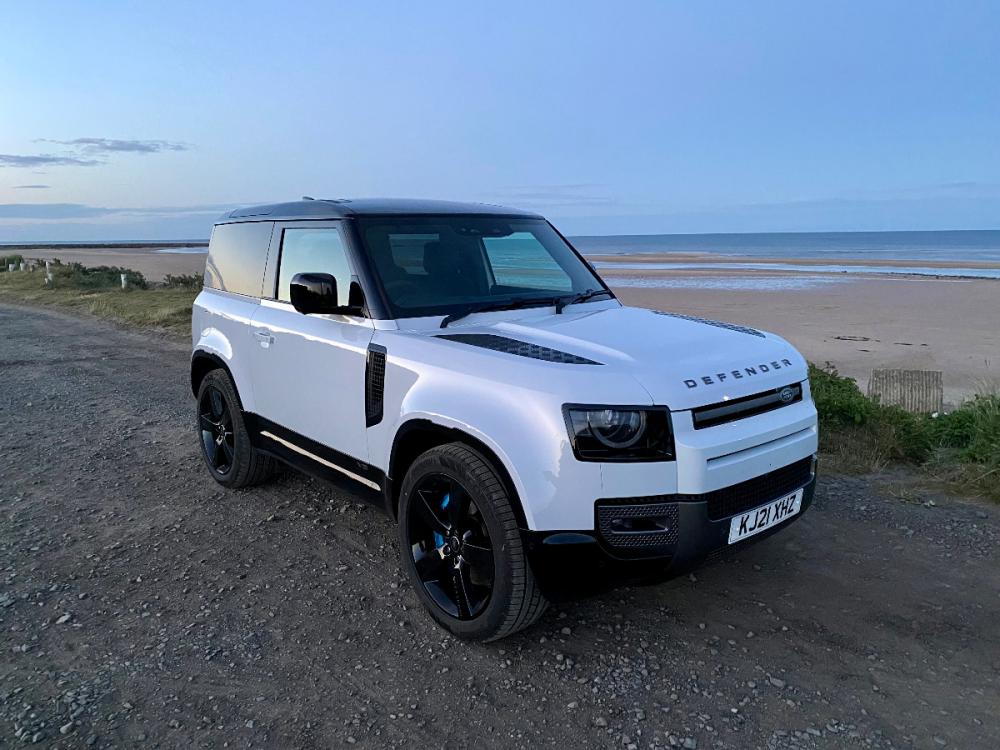 My farming neighbour was keen to give the Defender the once over and was suitable impressed. I suspect he has since had a conversation with our local friendly Land Rover dealer. I doubt V8 power will be for him, but the off-road credentials combined with a comfortable and luxurious interior most certainly will be.

My cousin, owner of an old Defender was also rather taken with the newbie. I know discussions were to take place with his wife as to whether they should upgrade and with the values of the old model soaring, the cost to change may not be that painful.

Other than the fuel economy, I too could easily see myself behind the wheel of a new V8 Defender. It strikes the right note and manages to be bang up to date, yet with a definite nod to what has gone before. Clearly now aimed at an affluent clientele who lead an active life, the new Defender in any guise will doubtless please and is undoubtedly the rural 4x4 to be seen in.

A full order book is testament to that, so join the queue if you want to join the club. 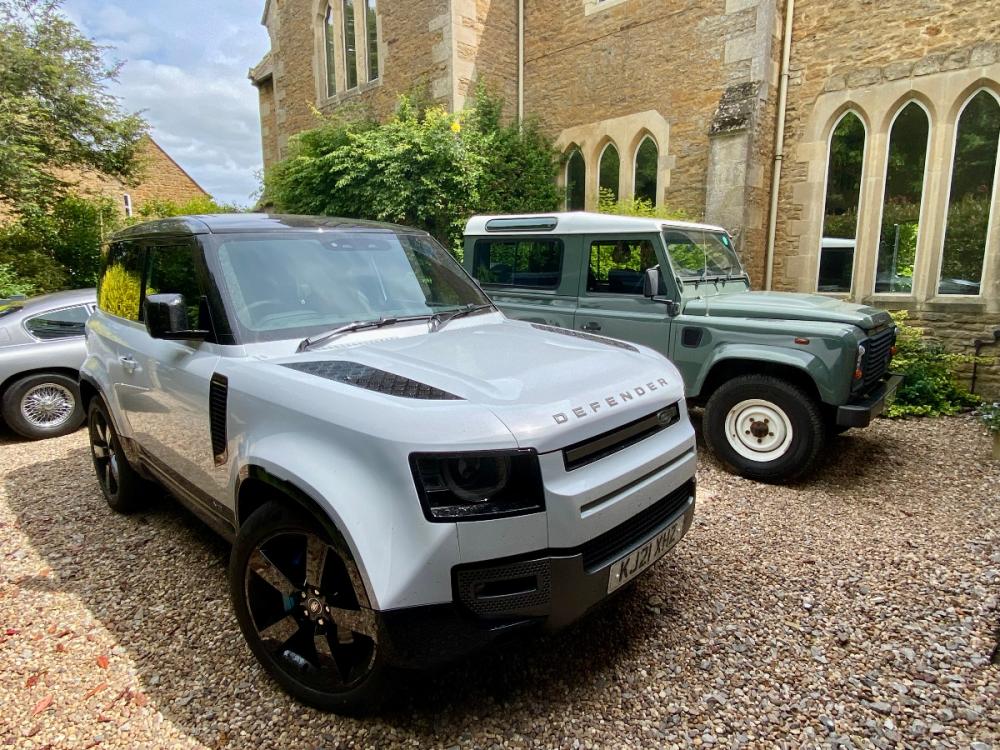 ‘New or old - which would you choose?’
Also by Andy Harris...
A New Range-Topper From Citroen - C5 X On TestMG Expands Its Range Of Affordable EVsMazda MX-5 On Test – Still As Good As EverFast Charging Comes To A1 Wetherby ServicesRolls-Royce Ghost – The Black Badge Edition