from Under Milk Wood

To begin at the beginning:

It is spring, moonless night in the small town, starless
and bible-black, the cobblestreets silent and the hunched,
courters'-and-rabbits' wood limping invisible down to the
sloeblack, slow, black, crowblack, fishingboatbobbing sea.
The houses are blind as moles (though moles see fine to-night
in the snouting, velvet dingles) or blind as Captain Cat
there in the muffled middle by the pump and the town clock,
the shops in mourning, the Welfare Hall in widows' weeds.
And all the people of the lulled and dumbfound town are
sleeping now.

Hush, the babies are sleeping, the farmers, the fishers,
the tradesmen and pensioners, cobbler, schoolteacher,
postman and publican, the undertaker and the fancy woman,
drunkard, dressmaker, preacher, policeman, the webfoot
cocklewomen and the tidy wives. Young girls lie bedded soft
or glide in their dreams, with rings and trousseaux,
bridesmaided by glowworms down the aisles of the
organplaying wood. The boys are dreaming wicked or of the
bucking ranches of the night and the jollyrodgered sea. And
the anthracite statues of the horses sleep in the fields,
and the cows in the byres, and the dogs in the wetnosed
yards; and the cats nap in the slant corners or lope sly,
streaking and needling, on the one cloud of the roofs.

You can hear the dew falling, and the hushed town breathing.
Only your eyes are unclosed to see the black and folded
town fast, and slow, asleep. And you alone can hear the
invisible starfall, the darkest-beforedawn minutely dewgrazed
stir of the black, dab-filled sea where the Arethusa, the
Curlew and the Skylark, Zanzibar, Rhiannon, the Rover,
the Cormorant, and the Star of Wales tilt and ride.

Listen. It is night moving in the streets, the processional
salt slow musical wind in Coronation Street and Cockle Row,
it is the grass growing on Llaregyb Hill, dewfall, starfall,
the sleep of birds in Milk Wood. 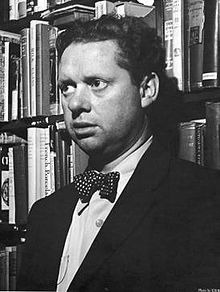 Dylan Thomas at the Gotham Book Mart., New York City, in 1952
In five days time, I will be reading the opening section of Under Milk Wood at a funeral. One of the most brilliant celebrations of words for their own sake in the English language, the piece is a fitting homage to a life well lived, to a person for whom expression, communication and good humour were all.

And as I write this I see a non sequitur hoving into view: the English language viewed simply as a repository of words could not begin to contain the eloquence and lyricism of delivery that characterise Dylan Thomas at his freeform best. For this is a Welsh play in the rendering, a musical interlude whose fluidity and rhythm encourage energetic enunciation in the native tongue.

Not a poem in the strict sense, Under Milk Wood is more essentially poetic than many of that title. The gentle syntactical rise and fall, the strange uneven metronome of phrasing and natural linguistic flair, yield a kind of licence. Thomas’ cavalier conjunctions of words and inventive neologisms are not so much brave as necessary – they enable recognition through the savouring of the sound. In one elegant, alliterative compound, this poet can artfully process an occupation, a disposition, a landscape:

‘And you alone can hear the invisible starfall, the darkest-beforedawn minutely dewgrazed stir of the black, dab-filled sea’.

In Thomas’ vertiginous conflations you can hear the echo of an ironically English influence: Gerard Manley Hopkins’ groundbreaking use of ‘sprung’ rhythm and word juxtapositions, which prepared the ground for Modernism, are distinct ‘noises off’ in Under Milk Wood ’s magically-charged Illyrian fantasy.


Also by Steve Whitaker...
Poem Of The Week: 'Snowdrop' By Ted Hughes'To Travel Hopefully' : Stations Of The Mind'Thick Like Cream; Perfect Like An Egg': Beneath The Trees Of Eden By Tim BindingInto the Light: Sheaf (Digital) Poetry Festival 2020Poem Of The Week: 'Night Rain' By Edward Lucie-Smith