From ‘The Rape of the Lock – Canto II’

But now secure the painted vessel glides,
The sun-beams trembling on the floating tides,
While melting music steals upon the sky,
And soften'd sounds along the waters die.
Smooth flow the waves, the zephyrs gently play,
Belinda smil'd, and all the world was gay.
All but the Sylph—with careful thoughts opprest,
Th' impending woe sat heavy on his breast.
He summons strait his denizens of air;
The lucid squadrons round the sails repair:
Soft o'er the shrouds aerial whispers breathe,
That seem'd but zephyrs to the train beneath.
Some to the sun their insect-wings unfold,
Waft on the breeze, or sink in clouds of gold.
Transparent forms, too fine for mortal sight,
Their fluid bodies half dissolv'd in light,
Loose to the wind their airy garments flew,
Thin glitt'ring textures of the filmy dew;
Dipp'd in the richest tincture of the skies,
Where light disports in ever-mingling dyes,
While ev'ry beam new transient colours flings,
Colours that change whene'er they wave their wings.
Amid the circle, on the gilded mast,
Superior by the head, was Ariel plac'd;
His purple pinions op'ning to the sun,
He rais'd his azure wand, and thus begun. 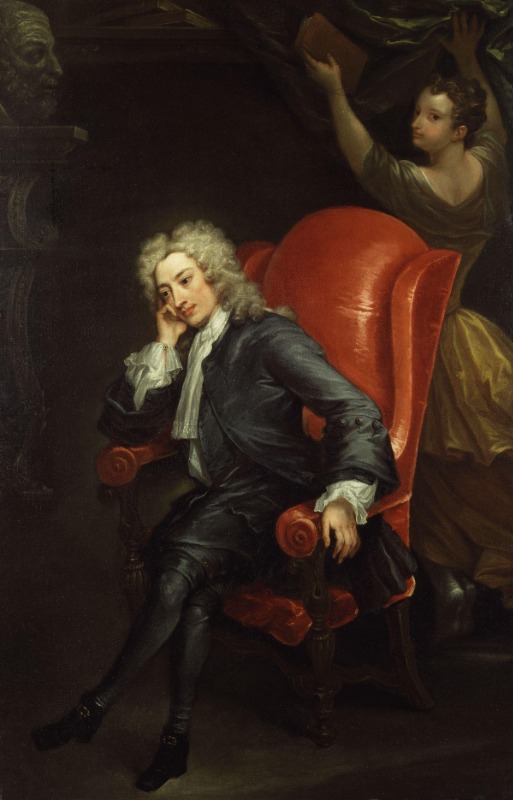 Charles Jervas, Public domain, via Wikimedia Commons
A master of redress through the medium of satire, the diminutive Alexander Pope made an irony of outreaching the limitations of his own physical stature in the elevated language of the heroic couplet. His long poetical excursions, aimed, as they often were, at the decadent aristocratic hubris of the early eighteenth century, were bound to invite counter invective: the targets of Pope’s ire, recognising themselves in the mufti of dramatic purpose, were quick to respond with the meagre intellectual resources at their disposal – cheap punts at the poet’s physical disposition.

That Pope’s arrows were only infrequently barbed – his work of correction was proportionate but not cruel – is a measure of both his philosophical approach, and of his immense skill. Directed towards the carapace of manners and social etiquette of the privileged and indolent classes, Pope’s intention naturally widens to compass the vagaries of human nature and, particularly, the pitfalls (and pratfalls) of self-delusion. Not least in the figure of Lady Arabella Fermor, a contemporary socialite and Court-goer, whose devotion to ‘toilette’, to endless rounds of tea-partying, and to being noticed, became the foundation for ‘The Rape of the Lock’, an Augustan pastiche. A long ballad whose central conceit is the stealing, or ‘raping’, of a lock of the protagonist’s hair by a suitor, is conceived in steady iambics, the better to describe the passing of a day’s self-adoration in a solemn procession of parody/worship which devalues the act of oblation by paradoxically aggrandising it in the mock-heroic style.

This fragment of the poem is taken from Canto II and takes up the narrative at the point at which Belinda’s stately glide down the Thames is interrupted by the watchful gaze of her unseen protectorate, a force of airborne Sylphs whose call to arms both presages the threat, and will defend the maiden’s honour when the terrible affront to her person is prosecuted. An illustration that Pope’s poems are so much more than forays of wit and cynicism, these regular pentametrical couplets are quite beautifully hewn, conferring a fragility as flimsy as Belinda’s ‘equipage’, her accoutrements of social topshow. The descriptions of the flitting Sylphs at their airy task are breathtaking, conveying a delicacy of tone as fine as anything in the English language:

‘Transparent forms, too fine for mortal sight,
Their fluid bodies half dissolv'd in light’.


Also by Steve Whitaker...
The Swamp Ghosts Of Pripyat: Stalking The Atomic City By Markiyan KamyshThe Endless Opportunity Of Words: Lanyard By Peter SansomPoem Of The Week: Wheel By Stephen DeePoem Of The Week: The London Dinner Party By Jayne JosoPoem Of The Week: The Vote By Ralph Dartford
These tiny figures, whose polychromatic wings are ‘Dipp’d in the richest tincture of the Skies’, are as nearly visible as to invite artistic comparison – take a look at John Atkinson Grimshaw’s ‘Spirit of the Night’ for a rendering in ‘tincture’, then marvel at Pope’s exquisite use of language. The poet’s uncommon control ensures that the lucent tableau is an outrageous magnification, a ramping up of insignificance to prick several over-inflated courtly balloons with one needle. For in the reckoning, Belinda’s idle, sybaritic existence, and that of those for whom she stands, amounts to little, as Pope knew better than anyone:


The fragment is taken from Pope: Poetical Works, Edited by Herbert Davis, New Introduction by Pat Rogers (1978) and is published by the Oxford University Press