Confidence among consumers declined for the third month in a row, according to the latest analysis from YouGov and the Centre for Economics and Business Research (Cebr). While still positive overall, the index saw a drop of -1.3 points to 109.2 – its lowest level since March 2021 when the coronavirus lockdown was still in place.

Once again, the measures tracking household finances saw the largest month-on-month declines, while perceptions of home value also saw a slight fall. Among the eight underlying measures, only three showed improvements from September to October.

YouGov collects consumer confidence data every day, conducting over 6,000 interviews a month. Respondents answer questions about household finances, property prices, job security and business activity, both over the past 30 days and looking ahead to the next 12 months. 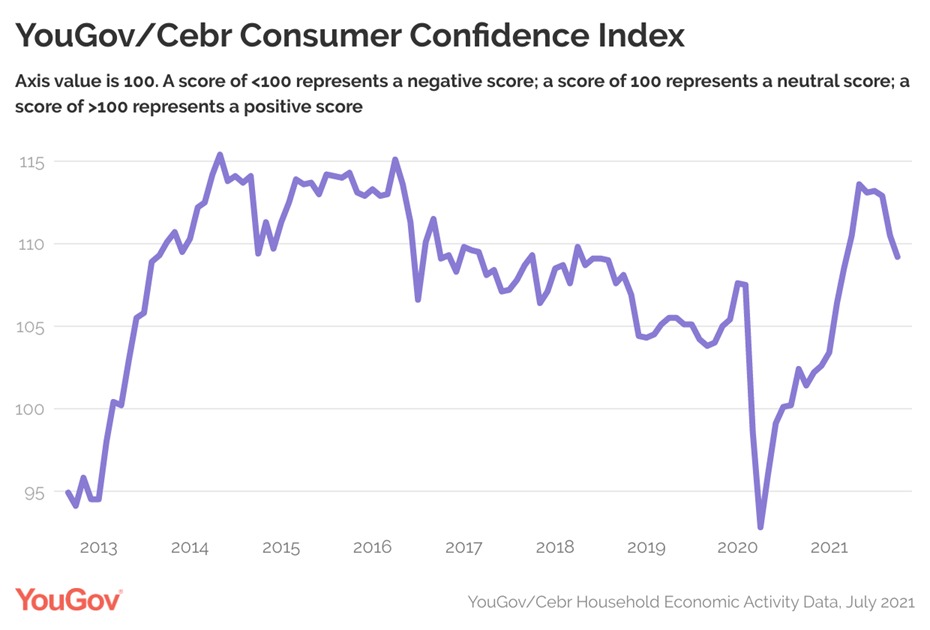 For the second consecutive month, Britons reported a decline in household finances over the past month. Scores fell by 5.0 points to 84.6. At the same time, outlook on household finances slumped to 81.1 – a decline of 9.7 points and the third-largest fall on record. This follows reports on the Treasury’s annual Budget that households could face increasing costs and larger tax bills.

Business activity (how busy workers say their workplace was in the past month, or how busy they expect it to be in the next 12 months) has been more mixed. While both metrics remain positive, scores for the past 30 days rose to 114.2 – an improvement of 3.3, and the biggest jump since March 2021– outlook for the next 12 months fell by -1.7 to 123.9. Recent reports indicate that businesses struggled with staff shortages, which may partially explain why employees feel busier than they did in September, and why they’re more pessimistic about the year ahead.

There were some positive signs among other metrics. Despite the end of the government furlough scheme, workers feel more optimistic about their job security in the next 12 months than they did in September: scores climbed to 118.2 in October, an improvement of 2.6 on the month before. This could partially reflect reports that the end of the scheme has not led to as many job losses as expected.

Meanwhile, according to the house value index, homeowners are slightly more likely to perceive a drop in their property’s value over the past 30 days. Scores were nudged downwards in October by 0.8 points – but at 125.8 they remain firmly positive. Outlook for the next 12 months saw an even smaller decline – falling by 0.2. – and with a score of 132.4 homeowners are again far more optimistic than not.