Today the Prime Minister set out his vision on how the government would deliver on the central purpose of his premiership – to level up and unite the whole of the United Kingdom.

Speaking from the UK Battery Industrialisation Centre (UKBIC) in Coventry, the Prime Minister outlined the challenges that we face and opportunities we must grasp to make sure that we build back better following the pandemic.


The Prime Minister set out the catalytic role for government and the need to:

Empower strong local leaders by taking a more flexible approach to devolution, with new ‘County Deals’
Focus on growing the private sector by creating the conditions for long-term growth and productivity;
Invest in infrastructure and connectivity;
Ensure that people have access to good public services, and the skills and training needed to get good jobs; and
Improve the quality of life in communities through cutting crime and regenerating towns and high streets

Ahead of the publication of the White Paper in the Autumn, which will include more details on the government’s approach, the Prime Minister also used this opportunity to announce a series of interventions to help deliver the aim of levelling up the UK. 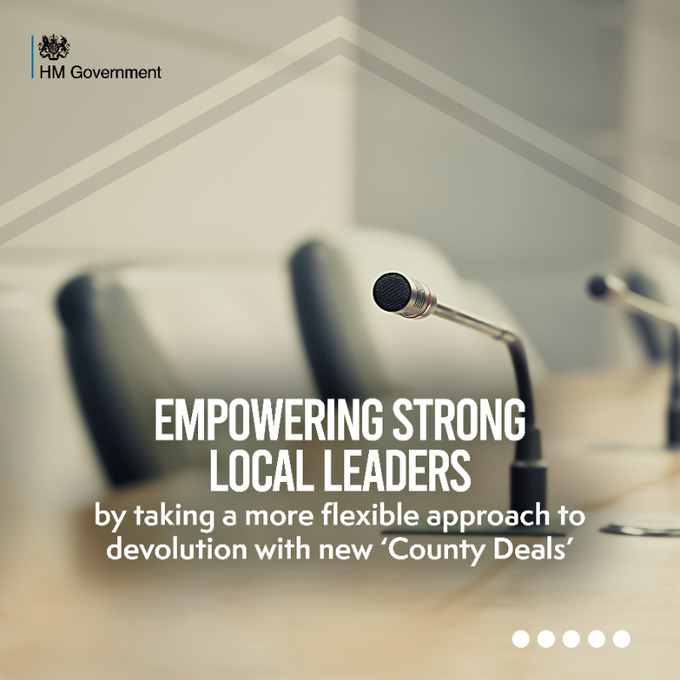 New ‘County Deals’ to take devolution beyond the largest cities, offering the rest of England the same powers metro mayors have gained over things like transport, skills and economic support.

Further detail will be set out in the Levelling Up White Paper, but as the Prime Minister set out, county deals will not be one size fits all, and government will take a flexible approach to allow more places to agree devolution. 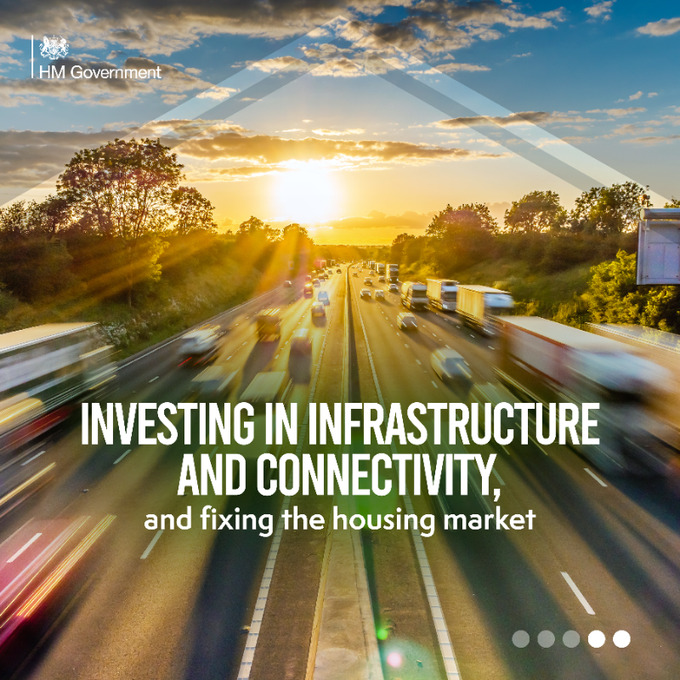 Government funding will enable these areas to invest in their local economies, implementing proposals submitted to the government’s Towns Fund, which is designed to create jobs and reshape our towns and cities into places where businesses and communities can thrive.

All 101 initial places announced in September 2019 have now been allocated funding. 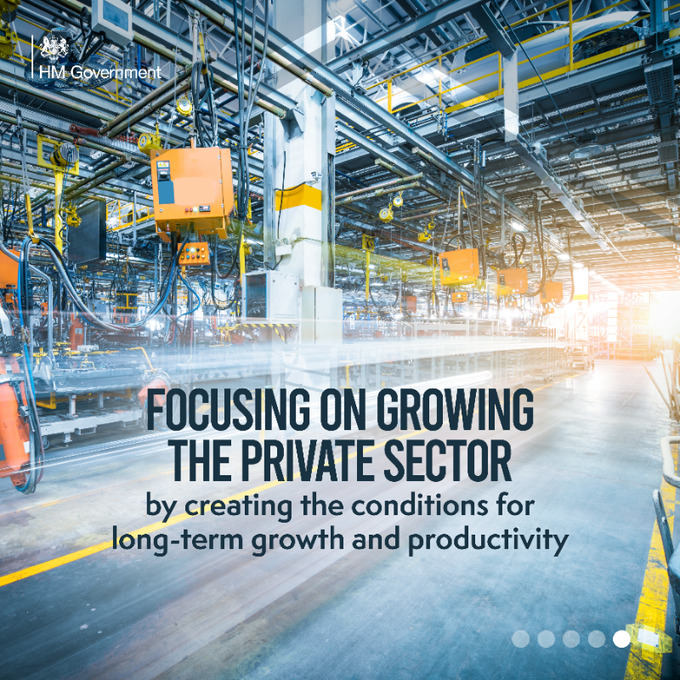 New funding of £50m next year for grassroots football pitches to enable more people to access high-quality football pitches. This investment will be targeted at left-behind communities and will help to address health inequalities, as well as ensuring more people can play our nation’s sport.

The £150m Community Ownership Fund, which gives people across the UK the chance to become owners of their local pubs or football teams, launches today. Communities in all four nation will be able to bid for up to £250,000 matched funding to buy or take over local assets and run them as community-owned businesses, including local pubs, theatres, post offices, sports grounds and corner shops, saving them from risk of closure.

The regeneration of the high street is a key part of the Prime Minister’s plan to level up with a new High Streets Strategy to support them to thrive by adapting to changing economic trends.

Al fresco dining will become the norm, with pavement licences to be extended and then made permanent, making it easier and cheaper for pubs, restaurants and cafes to set up tables outside and serve more customers. 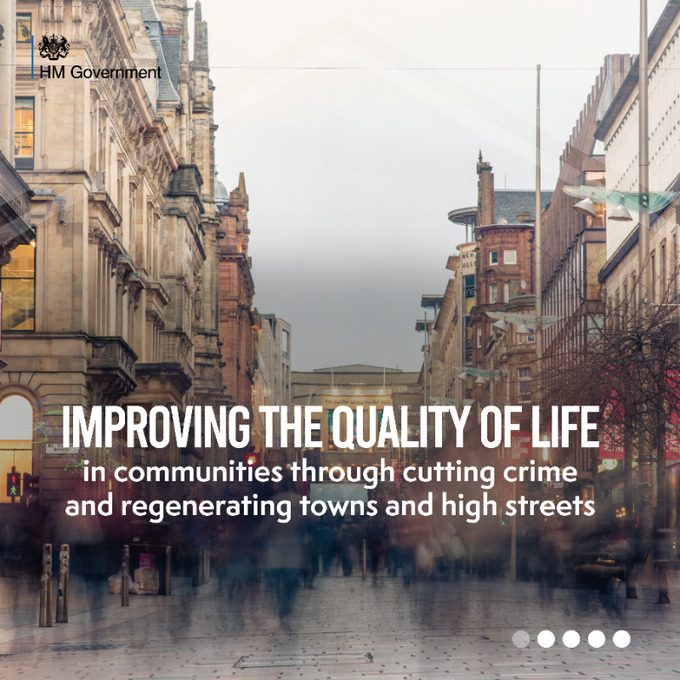 Takeaway pints will continue for another 12 months as the temporary permissions for off-sales of alcohol are extended in England and Wales. This will give a further boost to the hospitality industry as local residents enjoy a great British summer together outdoors.

Empty high street properties will be brought back into use as new businesses or homes as places take advantage of use flexibilities introduced as part of government’s planning reform programme.

The government will launch a war on graffiti and litter. £10m will be invested in removing chewing gum litter and gum stains from our high streets, with money raised directly from producers as part of efforts to get them to take more responsibility for gum litter. Planning rules will be reviewed so that new fast food outlets have to clean up litter they generate. And government will encourage councils to take a more hands-on approach to cleaning up graffiti, supported by a £2m graffiti war chest, with offenders now doing high visibility clean-up of graffiti, litter and fly-tipping.

Finally, there will be a UK-wide National High Streets Day where local communities across the UK come together to clean up and celebrate their high street, driving footfall and spend. This will take place when Covid-19 restrictions allow. 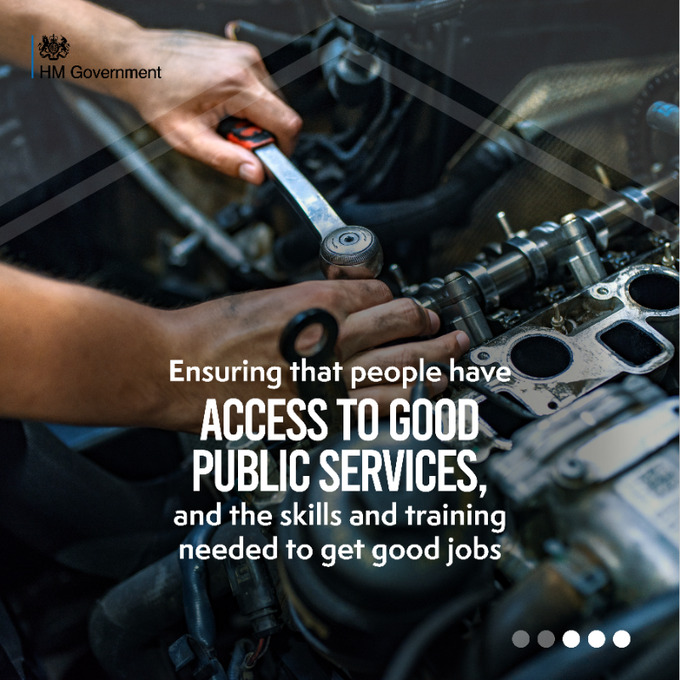 Launching the £4.2 billion City Region Sustainable Transport Fund, announced at Budget. This is for eight English city regions for London-style transport settlements to begin the process of bringing their local transport systems up to the standard of the capital’s.

This new money is alongside that available to these and other areas from our £4.8bn Levelling Up Fund, Major Road Network funds, electric vehicle infrastructure and the PM’s announcement of £5bn for buses and cycling.

“Today’s speech outlined the need for a continued, yet, accelerated focus on levelling-up across the UK.

“The announcement of new local leadership will allow local people to be at the heart of levelling-up’s purpose and help address the UK-wide imbalanced economy and centralisation, as highlighted by the Prime Minister. Within the North, this should help strengthen the voice across the region and ultimately encourage significant improvement to local areas, aiding long-term levelling up goals. This, in combination with existing strong Northern policy maker voices, will see the right projects chosen, project development accelerated, and business communities and government departments mobilised for success.

“Critically, capital projects including the £640bn investment in infrastructure connectivity and £4.8bn Towns deal, will lay the foundations of levelling-up. But to achieve real success, the levelling-up vision must be at the heart of government policy development and governments must work together with the wider business community to maximise the potential of levelling-up’s regional prosperity.

“Given the net-zero targets across the region, ranging from 2037 all the way through to 2050, green technology and decarbonisation will play a huge part within levelling-up. In order to meet such ambitious targets, and as we embark on plans for improved infrastructure and technology, sustainability will have to be at the forefront of these decisions.”

“Levelling Up is not only vital to prosperity and opportunity in all parts of the UK, it’s also a core requirement for our competitiveness in the global economy. The PM is right to recognise the importance of creating confidence among businesses to invest, and empowering local leaders to deliver.

“For too long, we have been so much more regionally unequal than our economic competitors. Our success in the decade ahead needs to draw on the unique talents and advantages of our regions and nations.

“So levelling up must be a business imperative too. Only through dynamism in every community can we create the skills, jobs, and growth we need.

“At the CBI we intend building coalitions of business leaders in different clusters around the country for this task – working with our partners across government and centres of education and skills.

“Businesses are already playing their part - whether that’s renewable energy in the North East, advanced manufacturing in the Midlands, or semiconductors in Wales. Now we must seize the moment to grow prosperity for all.”