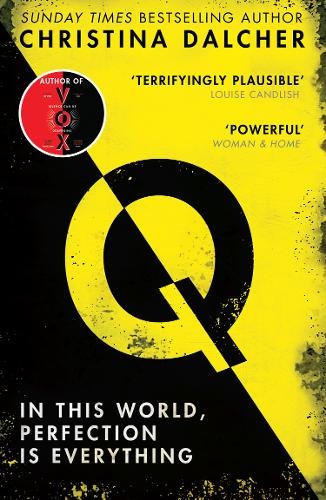 Q is the second novel of bestselling author Christina Dalcher, a Georgetown-based doctor of theoretical linguistics. Not only is Q a welcome addition to the genre of dystopian fiction, I suspect it is also going to be an important one, as more readers come to discover its pages.

Dalcher’s is a future of alternate ethics and morals – an elitist and inegalitarian society in which “some … are [definitely] more equal than others”, to paraphrase Orwell. The only universal aspect is the sheer draconianism and totalitarian persecution meted out to all by the controversial “Q laws” from which, hypothetically, even the president himself wouldn’t be excepted.

To clarify, Q isn’t a non-canon fictional biography of James Bond’s quartermaster; rather, “the Q” is essentially a score for life, for Dalcher’s populace is ruled by a constantly fluctuating cipher. Picture a particularly insidious Experian credit score with dire, life-altering implications should it ever decrease. You will then have a better idea of what the Q entails.

The “Q scores” hang about the necks of Dalcher’s subjects from cradle to grave, determining their chances in life, social standings and even which queues they join at supermarkets. Those with higher scores proceed to the front; those with lesser Qs have to wait in line – reduced, in other words to second-class-citizens. Thus are we introduced to a new system of codification for class prejudice and social segregation. Discrimination is the watchword in a newly stratified meritocratic society in which life, quite literally, is about scoring points.

Dalcher employs a non-linear narrative in Q – an account of events interspersed with recollections from her narrator’s past, which then inform her present as the horrors of the “Q system” unfold. We learn that the Q was initiated as a means of immigration control, but proved to be something of an ouroboric policy, leading instead to internal divisions: “It started with fear and it ended with laws”. Consequently, in Q’s present, only first-class card-carriers are permitted to enjoy life in all its finery.

But the scales can easily shift as Q’s protagonists, the affluent Fairchild family, come to discover when the system turns against them, bursting their “bubble of privilege”. For Mr and Mrs Fairchild, the first glitch in their quotidian comes when Freddie, their second daughter, fails to make an important grade at school. From this moment the family’s locus amoenus is jeopardised, setting in motion a calamitous chain of events.

Dalcher’s story mainly focusses on school environments, for Q scores are determined, in part, by grade outcomes. Here, Dalcher raises concerns about the over-testing of young students. Parks and play areas are pointedly deserted. Children are no longer children. Worse still, the principles of “no child left behind” have been superseded by favouritism: “We reached a point where the public school system … couldn’t supply an across-the-board education”. As a consequence, those pupils who fail to make the grade find themselves demoted to special “yellow schools” on the fringes of society.

Such is Freddie’s experience. Like so many students before her, she is required to downgrade from her top-tier school, with its more opulent silver bus, to one of the infamous yellow boarding institutions, which are barely distinguishable from prison camps. To rub salt into the wound, her father, the “Deputy Secretary of the Department of Education”, has the power to shield her, but chooses not to, instead championing his eldest daughter and model student, Anne.

Anne initially embraces the Q system, doting on her father’s every word, and even vets prospective boyfriends on account of their Q rankings. She is reminiscent of 1984’s girls of the “Junior Anti-Sex League” – the perfect “swallowers of slogans”. Indeed, the indoctrination of children from an early age, when most liable to become proponents of party dogma, is a recurring theme in Dalcher’s work. In her debut novel, Vox (2018), her protagonist’s emblem-wearing son, Steven, is the mouthpiece for a new patriarchal system and has the gall to instruct his mother on the place of “woman” in society. (Doubtless, if I’d been similarly candid with my mother at Steven’s age, I’d still be applying sticking plasters a week later!). The notion of precocious children undermining the authority of their parents recalls 1984’s Mrs Parsons, a character openly “frightened of ... [her] own children” – Orwell, himself riffing on a chapter of Soviet history in which families were encouraged to shirk filial ties in greater allegiance to “Uncle Joe” Stalin. 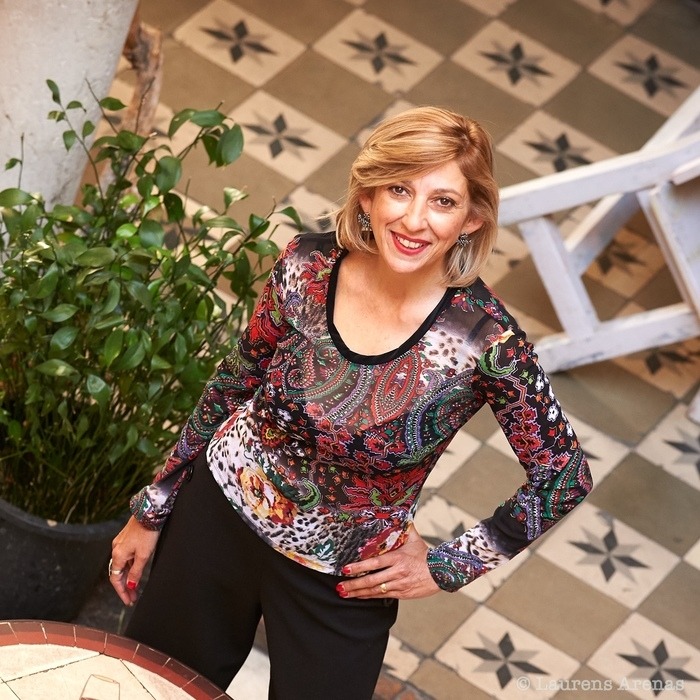 Christina Dalcher
Whereas Malcolm Fairchild is, if anything, relieved to have his underachieving problem child taken away, his wife, Elena, proves the better parent and decides to fight the system. To this end, she downgrades herself in her capacity as a teacher to the same yellow school as Freddie. Once established, Elena then gains a unique insight not only into the authoritarian working practices of the lower-tier institutions, in scenes akin to those of Jane Eyre’s Lowood School, but also the sinister mission creep of the Department of Education. Elena gradually exposes the discriminatory potential of the Q, learning that the DoE’s purpose is less about teaching children according to their educational needs and more about eradicating purported deficiencies. She notes that many of the children have in fact been unfairly interned at the school on grounds of disability or perceived “otherness”, and have even been made to wear coloured armbands to this effect. Furthermore, Elena discovers that many of her students’ Q scores have in fact been sabotaged in order to fulfil certain of the DoE’s concealed prejudices. Freddie, she finds, is one such candidate – ostracised simply on account of her struggles with anxiety.

To her horror, Elena also discovers that a eugenics programme is about to be initiated, with the intention of breeding only “junior Einstein[s ... with] perfect hair, perfect bleached teeth … [and] perfect skin” in the future. Very Aryan! Forced sterilisations are also to be conducted in order to eliminate certain alleged deficiencies in the gene pool. Consequently, Elena’s grandmother, and former member of the League of German Girls, urges her to flee the institution with Freddie as soon as possible. She also reminds Elena that atrocities committed in the field of eugenics were not confined solely to the Nazi regime: “Where do you think my great-uncle Eugen [Fischer] got the idea?”. Indeed, Q’s opening dedication is to one Carrie Elizabeth Buck, a victim of America’s “Eugenical Sterilization Act” of 1924. Here, Dalcher’s polemic is taken up a notch as Elena realises history is not only apt to repeat itself, but on the cusp of doing so again.

It is easy to assume, in our supposedly enlightened age, that such episodes from our past can never be repeated, given that we have ‘learned’ the lessons of history. But before we glibly dismiss Dalcher’s prophesies as hyperbolic scaremongering, it is worth noting that such acts of barbarism are currently being practised in real time, as the persecution of the Uighur Muslims in the Xinjiang province of China demonstrates. Thus, in a time when it has never been more popular to airbrush inconvenient truths from our history books, this perhaps demonstrates the need for remembrance more than ever, as it seems some of us have already started to forget.

Q is a feminist dystopia. Whereas the mistreatment of women and young girls in Vox is more pronounced, with freedom of speech restricted to a mere 100 words per day, and any deviation from this met with a jolt of electrical current, in Q the persecution is more subtle and enacted by stealth.

Firstly, the Q laws appear to favour men. Elena’s husband, the man behind the Q, is a truly hateful character whom you’d never tire of kicking down the stairs! But though Elena “loathe[s]” him, she is powerless to divorce him, for the courts now favour whichever party has the higher Q score, as dictated by such factors as salary and absences from work. (It isn’t stated explicitly, but presumably maternity leave is also a contributing factor for points being docked unduly). In short, divorce laws now work in men’s favour, while single suburban mothers are rendered social pariahs.


Also by James Goodall...
“Love All, Trust A Few, Do Wrong To None”: Leave The World Behind By Rumaan AlamQ & A With Susannah Wise, Author Of This Fragile Earth“Where Men Can’t Live, Gods Fare No Better”: This Fragile Earth By Susannah WiseA Greater Obedience To Authority: From Richard Condon To Stanley MilgramAn Interview With Heather Child: Author Of Everything About You And The Undoing Of Arlo Knott
Secondly, as in Margaret Atwood’s The Handmaid’s Tale or, more recently, Louise O’Neill’s Only Ever Yours, we see that a woman’s right to decide what happens to her own body is no longer hers. The state has effectively appropriated the procreative function, with Q scores being assigned prenatally. A woman who receives a below par score is actively encouraged to seek a termination before her unborn child has even had a chance at life! Elena turns dissident during her second pregnancy, however, and chooses instead to exercise her right as a mother: “Screw nature. Nurture counts more”.

Here, Dalcher also flags the socio-political implications of man-designing-man, of playing God and mapping the human genome directly. It puts one in mind of Andrew Niccol’s Gattaca (1997) and even stems back to Huxley’s Brave New World. Though genetic engineering may commence with noble intentions, such as curing diseases, it may take a more sinister turn when the project becomes aestheticised and life commodified. Choosing the eye colour or sex of children may only be the thin end of the wedge, as one key scene in Q makes plain. Set in a pre-natal clinic, we overhear two expectant mothers discussing their respective foetal scores. In the process, both sound more as if they’re perusing an interior design catalogue! Shopping for babies, in other words.

Q is a rare example of a work of dystopian fiction that concludes on a note of optimism. It is an uncomfortable read in places, in particular a scene in which Elena subjects herself willingly to experimental surgery, in exchange for her daughter’s freedom. The reading experience may leave you feeling tense at times, or at the very least with numb genitals! But to quote Dalcher’s own afterword, “If the references in this novel disturb you, then I have done my job. Because these events are disturbing. Patriotism does not require turning a blind eye to the darker chapters of our country’s history; if anything, the opposite”.


Q is published by Harper Collins