Originally released in November 1986 Now 8 has been re-released to tie in with the release of Now 108. 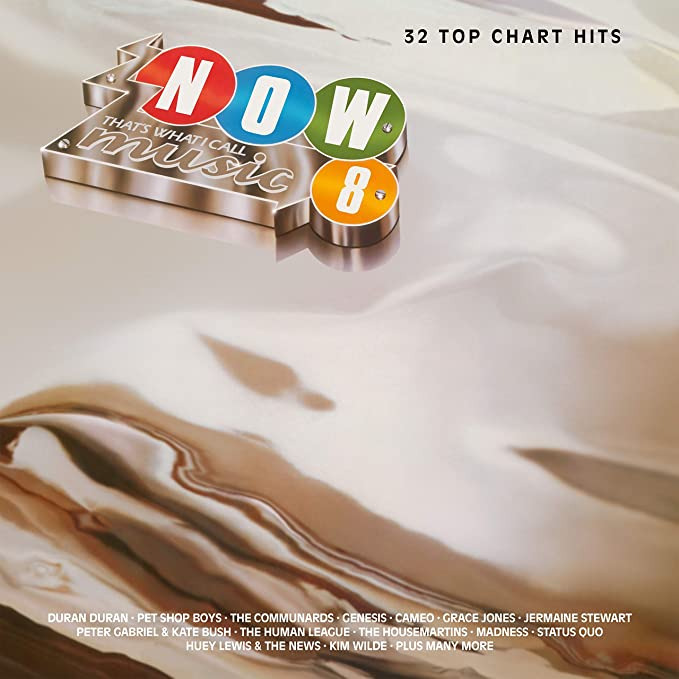 The music on each compilation is as different as chalk and cheese. Whilst Now 108 is mostly solo acts the mid 80’s were a period when groups ruled the charts. What is interesting to note is that a large majority of the acts on Now 8 are still recording and touring now - when conditions allow!

Spread over two CD’s the tracks might seem underproduced compared to tracks on Now 108 but one thing holds everything together - timeless songs.

Some tracks such as Walk This Way by Run DMC featuring Aerosmith were ground breaking when the song first came out, who would have thought that rap music and stadium rock would work together as well as it did?

Duran Duran tour later this year and visit the Open Air Theatre in Scarborough but their track Notorious sounds very much a product of the 80’s.

Manchester’s Swing Out Sister deliver their debut hit Breakout, owing a debt to the Burt Bacharach and Hal David songbook, with a touch of northern soul added the act are still recording and have a niche following.

We Don’t Have To Take Our Clothes Off To Have A Good Time by Jermaine Stewart arrived at the right time - MTV had started to be shown in the Yorkshire area and the video was perfect for the music channel.

Sheffield act The Human League had a change of musical direction in the mid 80’s - impressed with the production of the Janet Jackson songs on her Control album by Jimmy Jam and Terry Lewis, the band decided to enlist the duo to produce the track Human. The idea to have a fresh approach gave the Sheffield act a rebirth.

A new version of Don’t Leave Me This Way has just been released but why when the distinctive vocals of Jimmy Somerville make the version here the only one you need.


Also by Graham Clark...
Paco Versailles - DancemencoYorkshire Gets To Share The Stage At The Brit Awards Ahead Of NHS Charity Single ReleaseJack Savoretti. No Longer Singing To StrangersRag ‘N’ Bone Man - Life By MisadventureNOW That’s What I Call 12” 80s
CD2 contains another band who recorded a cover version that was slightly different from the original version - Status Quo recorded the 1982 Bolland and Bolland track In The Army Now which at the time had many Quo fans thinking that the band had sold out, regardless it gave the Quo one of their biggest hits in the 80’s.

Madness we’re running out of steam literally by time (Waiting For) The Ghost Train came out, the nutty sound of old had gone but like the majority of acts there was always a reunion on the cards a few years later.

(I Just) Died In Your Arms could possibly be the quintessential 80’s hit. Cutting Crew did have a few hits following the worldwide smash but ask anyone from the 80’s what they remember Cutting Crew for and this hit will roll off their tongues.

Stuck With You by Huey Lewis and The News is probably played every day in this country on an oldies radio station: non threatening and like putting on an old jumper it still sounds good 35 years later.

Cumbrian act It Bites were influenced by 70’s prog rock groups such as Yes, by adding pop sensibilities they made Calling All The Heroes a Top Ten hit, a melodic masterpiece that lead singer Francis Dunnery still performs today in his shows.

Do we really need Dr and The Medics performing ABBA’s Waterloo? It was a bad idea in 1986 and time hasn’t made things any easier. Ending with Eastenders Nick Berry with Every Loser Wins, the compilation thankfully has more winners than losers.