King of Castles: Bamburgh Castle dominates the beautiful coastline. Image by Steve Hare
Magnificent and majestic, Northumberland’s coastal area of outstanding natural beauty has even more to celebrate after one of its jewels has been crowned Britain’s best coastal destination.

The picturesque village of Bamburgh has been awarded five stars for the quality of its beach, seafront, food and value for money by almost 3,000 holidaymakers in a survey by Which?

A site of scientific interest, its stunning sand dunes - where Elizabeth Taylor and Richard Burton engaged in romantic trysts when he filmed Becket with Peter O’Toole in 1964 - are the golden gateway to the iconic Bamburgh castle.

Reigning over the beautiful coastline for over 1,400 years with beautiful views stretching to The Farne Islands, the castle, the former royal seat of Northumbrian Kings boasts a wealth of fascinating history.

We loved every minute of the three mile beach walk from Seahouses, savouring the birdlife and the short hike up the dunes to the Grade 1 listed building where we were greeted enthusiastically and equipped with a ‘Dog Direction’ guide for our golden retriever Bracken. 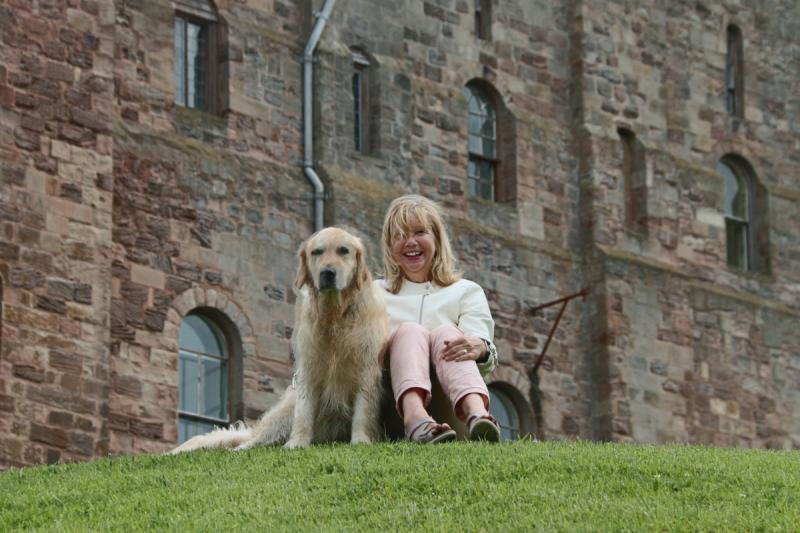 Pawsome views: Image by Steve Hare
Within the grandeur of its walls a rich legacy of knights and Kings, including King Oswald, is intertwined with ghostly tales reports of paranormal activities including a crying baby, a piano playing and dark eerie shadows lurking in castle corridors.

A tour of the fourteen splendid State Rooms featuring over three thousand objects including paintings by past masters, gorgeous furniture, weapons and porcelain is a must.

The opulence of the King’s Hall, a 19th Century masterpiece, took my breath away. Reflecting the high quality and standards of Victorian craftsmanship and materials, its ceiling and walls are produced from Siamese teak and minstrels gallery enhanced with a stunning stained glass window.

The return walk along the almost deserted beach with scurrying sandpipers builds up an appetite which can be satiated with an abundance of eateries.

A first time visitor, an unexpected delight packed with character, flavour and fabulous views is the The Jolly Fisherman at Craster - reportedly the birthplace of the kipper.


Stunning seaside setting: The Jolly Fisherman. Image by Steve Hare
A sign welcoming ‘muddy boots and dogs’ evokes a smile and seating is available upstairs, downstairs and in the beer garden overlooking the quaint harbour and Dunstanburgh Castle.

This nugget has earned an enviable reputation for its renowned crab soup along with delicious menus ‘From Garden Sea and Field’.

We enjoyed drinks outside as at the sun shimmered on the North Sea and fishermen packed up after a successful day, relishing an early dinner in the Snug with our contented canine.

The halibut steak with vierge crust, fennel and clam chowder and sweet potato croquette elevated the fish to a new level thanks to the top team led by highly talented Executive Head Chef, Kevin Mulraney, whose achievements at high-profile West end restaurants include achieving 3 rosettes at Berkeley square.


Halibut heaven. Image by Steve Hare
Agonising over the ‘Drop Anchor’ desert menu, we opted for an exquisitely light French Apple Tarte Tatin with vanilla pod ice cream and a sherry triple busting with refreshing fresh fruit and complemented with a chocolate tuille.


Tres Bien! French Apple Tarte Tatin
Owned and run since 2011 by David Whitehead - a former professional rugby player who had worked at The Jolly Fisherman as a youngster - and his sister Joanne, the restaurant is a champion of integrating the best locally sourced seafood and fresh produce into the menu. Success is apparent with oysters hailing from Lindisfarne, a North East coast Fish Pie and vegetables and artisan bread from local suppliers.


Regal ruins: Dunstanburgh Castle. Image by Steve Hare
Making a seaside splash in ambiance, decor and culinary delights the venue, which exudes a fresh and contemporary feel, has undergone a major overhaul.

Northumberland sweeps the board for the most castles in England (over 70 castle sites) - which is not surprising due to its bellicose backdrop where border wars raged across the 14th to the 16th century.

Wealth of seabirds and idyllic walks

Just a mile and a half away from The Jolly Fisherman and listed among the country’s top 100 walks, lie the spectacularly dramatic ruins of Dunstanburgh Castle, a 14th century fortification bestriding a remote headland. We took in the wonderful seascape and cows and sheep grazing idly on the approach to the castle.


Ewe’ll be made welcome here! Image by Steve Hare
Receiving up to 450 visitors daily during the recent half term break, Dunstanburgh Castle, a Lancastrian stronghold, witnessed violent battles during the Wars of the Roses - was besieged and captured twice by the House of York armies and later lapsed into decay. Highlights include the twin tower keep, seabirds and stunning scenery.

Home to flocks of local seabirds including guillemots, razorbills, kittiwakes, fulmars, shags - puffins feed in the water below and Peregrine falcons are spotted on the castle’s cliffs. National Trust custodians were delighted to share the news that a baby raven is this year among the castle’s new residents (sadly two were born but only one survived).

A proverbial paradise for walkers and cyclists, Northumberland’s coastal area of outstanding natural beauty spans almost 40 miles from Berwick-Upon-Tweed near Scotland to the Coquet Estuary.

We stayed at The Amble Inn on the mouth of the estuary, a contemporary pub with 30 rooms, epitomising the wonderful North East hospitality and warmth of genial and accommodating staff from the moment we set foot through the door.

Perfectly located for exploring gems including Craster, Seahouses, Bamburgh, Alnmouth and Low Newton-by-the-Sea, the dog friendly venue is The Inn Collection Group’s latest addition and already proving a hit since opening its doors in January this year.


Relaxed dining with good grub: Image by Steve Hare
Dinner at The Amble Inn was informal - just what was needed after a day’s walking and sightseeing - with great service without being rushed. We selected our leisurely meal from the comprehensive menu and a separate specials menu, opting for the twice baked Northumbrian nettle cheese soufflé which was as tasty as it sounded - and a lovely potted crab of white and brown fish bound with chef’s herbs and seasoning and accompanied with toasted ciabatta.


Seafood with a bite: potted crab
The choice of mains included homemade steak and ale pie, sea bream linguine, three chicken dishes and rump or rib eye steaks. We selected a market fish stew off the specials served with crispy kale and warm bloomer bread - and a classic burger 8oz patty topped with prosciutto, Monterey jack cheese, tomato salsa and pickled gherkin served on a brioche bun with house slaw and classic fries which went down a proverbial treat.

A hearty breakfast set us up the day’s exploration and we slept soundly in our lovely room after a ‘No snoring or snorting’ instruction to an oblivious Bracken who was in his 7th heaven. The dog friendly rooms also have a back door leading out to green areas.


Sweet dreams: image by Steve Hare
Sister pubs in the nine-strong group include the Bamburgh Castle Inn at Seahouses - a perfect pit stop at the bustling harbour with views of the Farne Islands, Bamburgh Castle and Lindisfarne.

Like their counterparts at The Amble Inn, the team here are take customer service seriously. This is reinforce by The Inn Collection Group recently receiving the accolade as the UK’s Best Pub Employer in the up to 500 employees category at the prestigious The Publican Awards.

Sightseeing - plentiful in the pretty town of Amble, renowned for its friendly folk and natural environment - includes the Harbour Village with local cafes, watersports, pop up shops and the Lobster Hatchery.

Every year the town hosts the UK’s only puffin festival, in tribute to 36,000-bird colony which nest on Coquet Island, an RSPB seabird sanctuary a mile off the coast. Boats sail there regularly from the harbour.

No visit to Amble is complete without stepping back in time at Warkworth Castle. One of the largest and most impressive medieval fortresses in northern England it affords stunning river and coastal views from its regal hilltop position above the River Coquet.


Warkworth Castle: Insight into Medieval life and architecture: Image by Steve Hare
The former residence of the influential Percy family, points of interests, of which there are many, include the striking gatehouse built in 1200 and one of the earliest parts of the castle.

A lively and colourful audio guide to the various rooms recreated milestones through the ages, giving us a rich and passionate insight into the lives of those who resided in this undefeated castle which changed ownership many times in its turbulent history.

This irresistible coast which boosts wellbeing with its treasure trove of wildlife, history, genuine warmth and breathtaking scenery energised and delighted us.


Thirst for more: Image by Steve Hare
Weaving a spell that beckons us back, this enchanting experience marked the start of a long-standing love affair that will never hit the rocks.