A new coin to mark the profound contribution minority communities have made to the shared history of the United Kingdom will enter circulation.

new coin launched following discussions with the ‘We Too Built Britain’ campaign
2.5 million “Diversity Built Britain” 50p coins will enter into circulation next week
designed by Dominique Evans - one of the UK’s foremost coin designers - reflecting her own experience of diversity 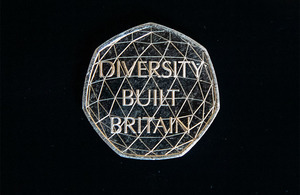 Around 2.5 million of the coins, which recognise and celebrate Britain’s diverse history, will be released today (Monday). The coin features a geodome, which represents a community of connection and strength, with each section working together to build something greater.

It was designed by Dominique Evans, one of the UK’s foremost designers, who has previously designed coins to mark VE Day, the Sapphire Coronation and Jane Austen. It was inspired by Ms Evans’ own personal experience growing up as a mixed-race woman.

The new 50p signals the intent of the Royal Mint and the Chancellor to include a wider range of people on coins and notes in the future.

The Chancellor, Rishi Sunak, commissioned the coin earlier this year following discussion with the ‘We Too Built Britain’ campaign, which works for fair representation of minority communities’ contributions across all walks of life.

Rishi Sunak, the Chancellor of the Exchequer, said:

"I have seen first-hand the contribution made by ethnic minority communities to Britain’s history. That is why I backed the “We Too Built Britain” campaign and requested that the Royal Mint introduced this coin to celebrate it.

"This coin, and the rest of the series, will act as a fitting tribute to the very profound impact ethnic minority communities have made on Britain, and I am grateful to the Royal Mint for turning this around at record speed."

Her design is the first in a series of coins The Mint will be producing, celebrating those who have helped shape our national history and culture.

I had the great pleasure of welcoming Dominque to a Cabinet meeting, along with Anne Jessopp, the first female Deputy Master of the Mint and Blondel Cluff CEO of the West India Committee and Advisor to The Royal Mint.

This new coin echoes the government’s commitment to building a fairer society for all."


Alongside the release of the coins, the Royal Mint and the West India Committee will also issue education packs to primary schools in England and Wales, so children have the opportunity to learn about these achievements.

The government will consult with stakeholders including “We Too Built Britain” and other groups representing minority communities on the themes of future coins in this series.

"When designing this coin, I began by thinking about the people who inspire me and what diversity has meant in my life. I believe that no matter where you are born, we all belong under the same sky and this was the starting point of the design.

The background of the coin features a geodome with a series of interconnecting lines and triangles that form a network. Each part is equal, and symbolises a community of connection and strength. The words ‘Diversity Built Britain’ talks about the differences between us, and the connection which gives us unity. The design also looks to the future, and the bonds which will continue to grow and make us stronger together."

"Ethnic minority people, as well as all under-represented groups, need to see themselves represented in British institutions. They need to see their contributions to Britain recognised. It is a part of an invisible social contract and it can build cohesion, promote a sense of belonging, inspire young people and unite us as a nation, showing that we all have an equal stake in society. We are a diverse, modern and global Britain – let’s show that. This coin helps bridge our nation’s past, its diverse present and its future, looking outward, positively, together."