Dr Meera Chand, Director of Clinical and Emerging Infections at UKHSA, said:
"While anyone can catch monkeypox, the majority of monkeypox cases in the UK continue to be in gay, bisexual and other men who have sex with men (MSM), with the infection being passed on mainly through close contact between people in interconnected sexual networks.

"Before you go to a party or event, check yourself for monkeypox symptoms, including rashes and blisters. If you have monkeypox symptoms, take a break from attending events or sex until you’ve called 111 or a sexual health service and been assessed by a clinician. It can take up to 3 weeks for symptoms to appear after being in contact with someone with monkeypox, so stay alert for symptoms after you have skin to skin or sexual contact with someone new." 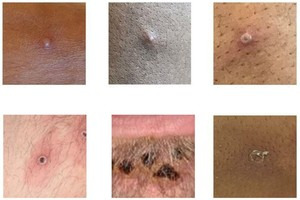 As of July 2022, the current outbreak clade of monkeypox is no longer classified as a high consequence infectious disease (HCID), following review by the Advisory Committee on Dangerous Pathogens (ACDP) and agreement by the UK 4 nations public health agencies.

This does not alter the public health response or measures taken to control monkeypox, but relates to which clinical pathways are used in the NHS.

This decision has been taken because the current outbreak does not meet the criteria for a high consequence infectious disease, which is defined as having a high mortality rate and a lack of available interventions.

We have had no reported deaths from monkeypox in the UK and we have vaccine available for higher risk contacts, healthcare workers who are caring for and who are due to start caring for a patient with confirmed monkeypox, and a new vaccination programme for those who are most at risk.

Future importations of monkeypox directly from West Africa as well as cases caused by the Congo basin clade of the virus will still be classified as HCIDs as we cannot predict their characteristics.

UKHSA is now working to adapt case and contact management using the growing body of evidence about the outbreak. The majority of contacts of cases will no longer be contacted every day following their initial notification and will instead be provided with contact details to approach if they develop symptoms.

This change has been made in light of the emerging evidence about disease severity, meaning that suspected cases do not need to be rapidly transferred to hospital.

NHS England is due to set out details on how eligible people can get vaccinated shortly. People are advised not to come forward for the vaccine until contacted.