Monkeypox Cases Confirmed In England – 31 May 2022 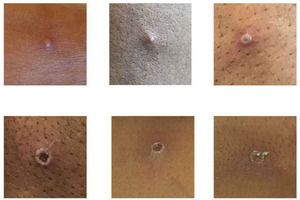 The latest cases, as of 29 May, bring the total number confirmed in England since 7 May to 172.

There are currently 4 confirmed cases in Scotland, 2 in Northern Ireland and 1 in Wales, taking the UK total to 179.

The risk to the UK population remains low, but we are asking people to be alert to any new rashes or lesions, which would appear like spots, ulcers or blisters, on any part of their body.

Although this advice applies to everyone, the majority of the cases identified to date have been among men who are gay, bisexual and men who have sex with men, so we are asking these people in particular to be aware of the symptoms, particularly if they have recently had a new sexual partner.

You should call NHS 111 or a sexual health centre immediately if you have a rash with blisters and either, you:

are a man who has sex with men

Tell the person you speak to if you have had close contact with someone who has or might have monkeypox, or if you’ve recently travelled to central or west Africa.

Do not go to a sexual health clinic without contacting them first. Stay at home and avoid close contact with other people until you’ve been told what to do.

Additionally, today, UKHSA has published guidance principles agreed across all 4 UK nations on how to effectively limit transmission of monkeypox and limit onward transmission when cases are identified.

This includes advice and protocols for those testing positive for monkeypox, their close contacts and anyone involved in their treatment or care, including healthcare workers. The principles are already in use in response to the outbreak, and today’s publication confirms the UK’s aligned response.


Dr Ruth Milton, Senior Medical Advisor at UKHSA, said:
"We are continuing to work closely with our colleagues in Scotland, Wales and Northern Ireland to ensure we are aligned in our approach to reducing the risk of transmission of monkeypox in the UK.

"We are reminding people to look out for new spots, ulcers or blisters on any part of their body. If anyone suspects they might have these, particularly if they have recently had a new sexual partner, they should limit their contact with others and contact NHS 111 or their local sexual health service as soon as possible, though please phone ahead before attending in person. This will help us to limit the virus being passed on."

UKHSA health protection teams are contacting people considered to be high-risk contacts of confirmed cases and are advising those who have been risk assessed and remain well to isolate at home for up to 21 days.

UKHSA has also purchased over 20,000 doses of a safe smallpox vaccine called Imvanex (supplied by Bavarian Nordic) and this is being offered to identified close contacts of those diagnosed with monkeypox to reduce the risk of symptomatic infection and severe illness.