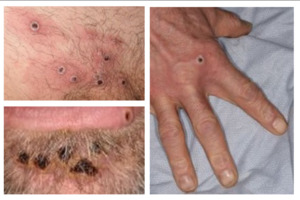 The UK Health Security Agency (UKHSA) has detected 5 additional cases of monkeypox in England and 1 in Scotland.

This brings the total number confirmed in England to 188 as of 31 May.

There are currently 5 confirmed cases in Scotland, 2 in Northern Ireland and 1 in Wales, taking the UK total to 196.

Anyone can get monkeypox. Currently most cases have been in men who are gay, bisexual or have sex with men, so it’s particularly important to be aware of the symptoms if you’re in these groups.

Contact a sexual health clinic if you have a rash with blisters and you’ve been either:

A further epidemiological update on the current outbreak using data up to 30 May has been published.