Formula 1 may have tested at the beautifully located Mugello circuit in northern Italy in the past, but it has never raced there before and so history was made as Mercedes’ Lewis Hamilton claimed the victory spoils after today’s inaugural Tuscan Grand Prix. His team-mate Valtteri Bottas was clearly the best of the rest, but the race was enlivened by its at times chaotic nature and was twice redflagged due to accidents. 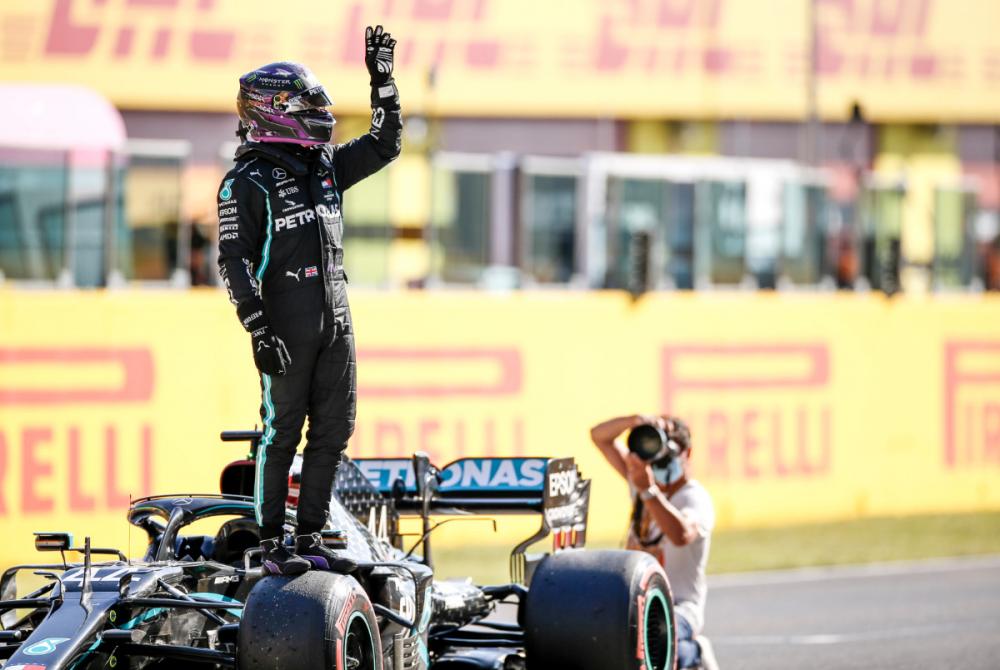 Lewis Hamilton proved fastest in both qualifying and the race
The Mugello facility is owned by Ferrari and so it was a fitting venue to mark the Scuderia’s 1000th F1 race, a milestone never achieved by any other team. The track has some wonderful corner names, such as the San Donato opening righthander, Poggio Secco, Arrabbiata 1 and 2, the lap ending mighty 180 degree Bucine sweep and yes even the Casanova turn! With Singapore no longer on this year’s calendar, Mugello was set to be physically the toughest race of the season for the drivers with gruelling forces of upto 5.5G on their bodies for 59 long laps under the Italian sun.

Ferrari’s aptly named SF1000 car introduced for this season may have its problems in terms of pace and handling, but at least the livery was changed for this commemorative weekend to a darker burgundy red colour, similar to that of its cars back in 1950. Mercedes supplies two safety cars for every Grand Prix weekend just in case one breaks down, as that would be rather embarrassing In front of a worldwide audience, and they usually bear the traditional silver arrows livery. For Mugello though they were an eye-catching red. 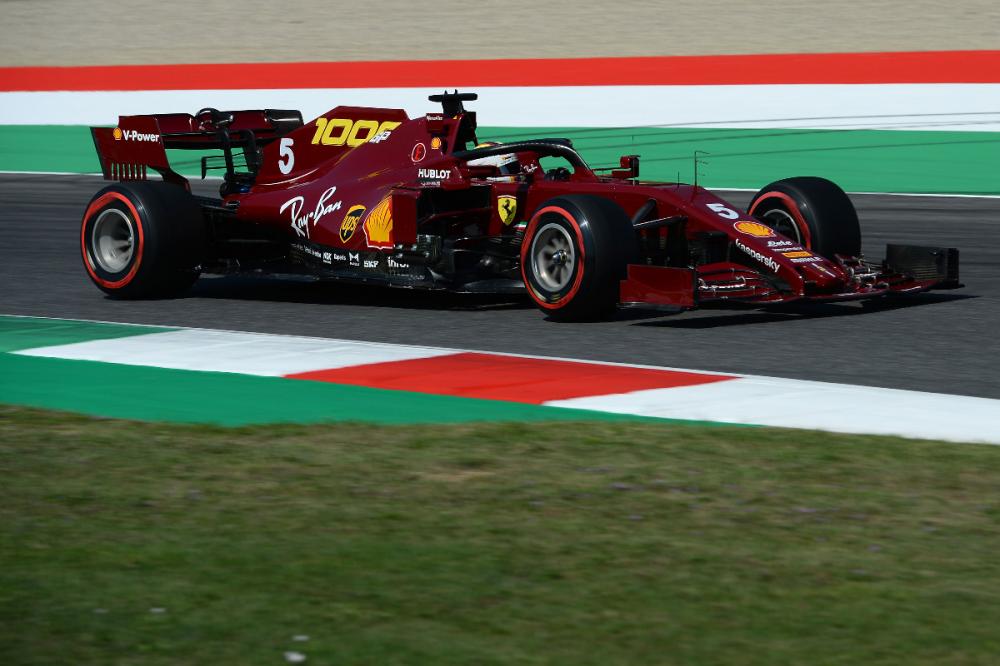 An unusual, but appropriate colour for Ferrari’s cars this weekend
The iconic Scuderia had arranged for some of its loyal supporters club members to be present in the grandstands and Mick Schumacher, son of the legendary Michael and current Formula 2 and Ferrari Academy driver himself, fittingly drove his father’s last world championship winning Ferrari, the F2004, round the track on race day morning. That glorious screaming V10 engine brought back such wonderful memories for so many of us as young Mick gave it some serious exercise.

On the Tuesday before the Mugello weekend Simon Roberts had been announced as acting team principal at Williams for an unspecified transitional period following the recent sale of the team to Dorilton Capital and the departure of Sir Frank and Claire Williams. Since June Roberts had been the managing director of the outfit’s F1 operations, having previously long been McLaren’s operations chief. With Roberts only having been given the job on a temporary basis, it’s clear that the new owners have other plans for a more permanent appointee, but they are remaining silent on that front for now at least.

We then witnessed a not unexpected, but significant development on the Wednesday evening when Racing Point announced that its driver Sergio Perez would be leaving at the end of the season after seven years with the Silverstone based team. This preceded the following morning’s press release that next season Sebastian Vettel would be joining them on a multi-year contract, just as the outfit is rebranded as Aston Martin F1. 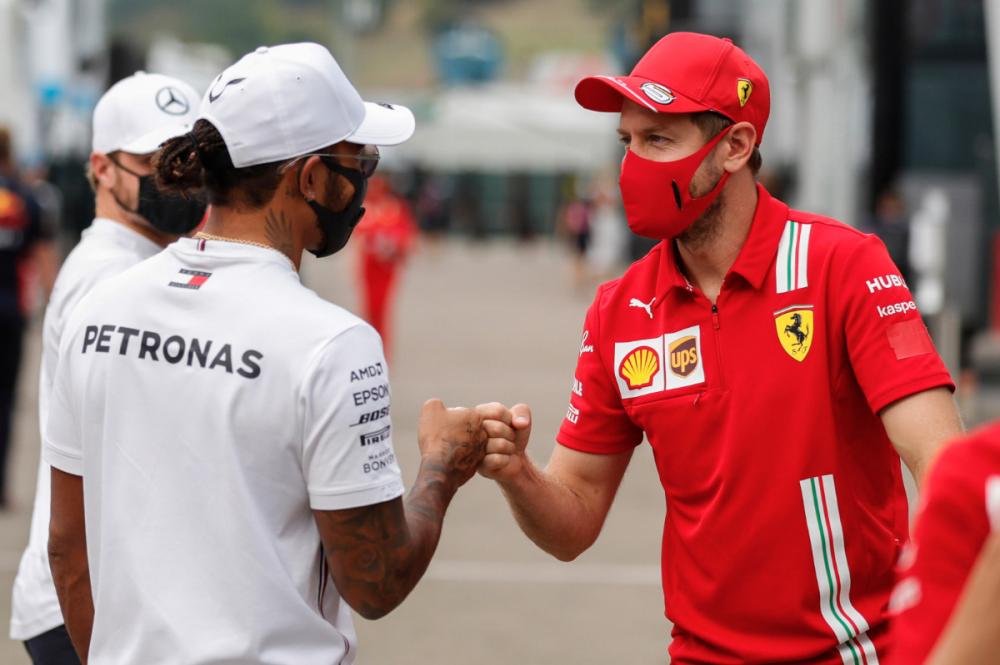 Hamilton congratulates Seb Vettel in the Mugello paddock
Over in the Mercedes camp there was a refusal to comment on growing speculation that existing major sponsor Ineos is about to purchase a shareholding in the team and possibly even a controlling one, with the name changed to Sir Jim Ratcliffe’s Ineos brand. Whether this happens or not, it seems very likely that Toto Wolff will step back from his team principal job to another related role at the end of this season.

Come Friday morning’s opening free practice session the drivers spent time getting used to the circuit for real after their advance simulator work. Bottas recorded the fastest time for Mercedes ahead of Red Bull’s Max Verstappen. Surprisingly after recent poor performances from Ferrari, Charles Leclerc was third quickest, but the young Monégasque driver put it down to him already knowing the track after an official filming day there for his team in June.

It was back to business as usual In the afternoon practice period as Bottas and team-mate Hamilton topped the timesheets ahead of the Red Bull duo of Verstappen and Alex Albon. Leclerc dropped to a more representative 10th fastest, just a couple of places ahead of Vettel in the other red car. The session twice had to be redflagged, firstly after an off for McLaren’s Lando Norris and then when Perez clashed with Alfa Romeo’s Kimi Räikkönen, earning the Mexican a one place grid penalty. Bottas went on to make it a clean sweep in Saturday morning’s final practice session as he left Verstappen and Hamilton in his wake as the best of the rest.

Qualifying was a different matter though as multiple champion Hamilton added a further pole position to his lengthy CV with a new track record, leaving team-mate Bottas to join him on the front row for the following day’s Grand Prix. Verstappen and Albon claimed the right to line up their Red Bulls just behind the two black cars, but they were both well off pole pace, particularly Albon. Leclerc impressed by being fifth fastest for his team’s special race, with Vettel only posting the 14th quickest time, but what a difference a week made for last Sunday’s winner Pierre Gasly as he failed to proceed beyond the first part of qualifying in his AlphaTauri.

Race day conditions were perfect as parachutists spectacularly descended from the clear blue sky towing large Ferrari and Italian flags behind them and the wonderful Andrea Bocelli gave us a rousing rendition of the national anthem. There was feverish activity on the grid though as the Red Bull mechanics worked on a last minute power unit software issue with Verstappen’s car, but they were confident the problem was resolved as the start approached. 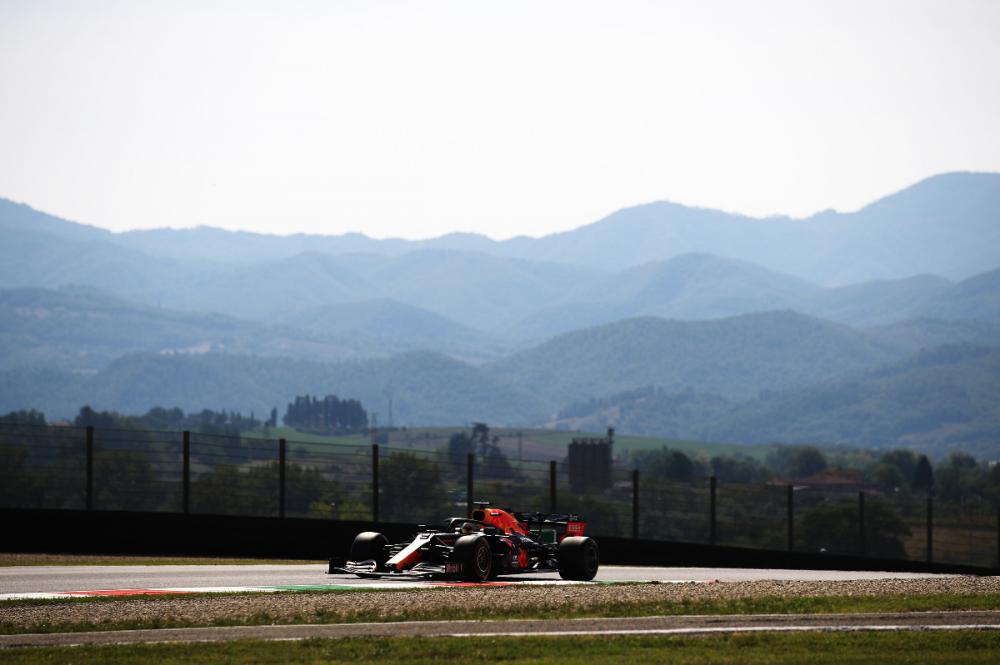 Max Verstappen’s race around the beautifully located circuit lasted just four corners!
It’s a long sprint down to the opening corner and when the red lights went out Bottas and Leclerc made superb starts, whereas Hamilton made a poor one and Verstappen soon suffered from a lack of power. As a result Bottas led Hamilton and Leclerc into the first turn, but three corners later there was chaos behind as Gasly’s AlphaTauri hit Räikkönen’s Alfa Romeo which in turn collided with the rear of Verstappen, punting him into the gravel and early retirement. Vettel also suffered front wing damage whilst trying to avoid Carlos Sainz’s out of control McLaren.

The safety car was immediately called into action and Vettel pitted for a replacement wing, changing his soft specification tyres to mediums too. The restart was set for the beginning of the seventh lap and the earlier chaos soon became even worse as Antonio Giovinazzi, Kevin Magnussen, Nicholas Latifi and Sainz suffered dramatic race-ending collisions on the start/finish straight, bringing out the red flags for a second Grand Prix running. Due to the nature of the Mugello circuit Bottas had been understandably and perfectly legally delaying his restart until the last moment to protect against Hamilton slipstreaming him on the run to the first corner, but the drivers well to his rear saw the green lights on the gantry and actually made their own restarts before those leading the pack. Cue mayhem, but fortunately no injuries other than a sore left hand for Sainz.

When all the debris had been cleared away we were left with thirteen runners lining up on the grid for the standing restart and Bottas’ lead only lasted until the first corner as Hamilton swept past him round the outside. As the two Mercedes cars quickly started to edge clear third placed Leclerc very much headed in the opposite direction due to his lack of pace. After a flurry of pit stops Hamilton still led from Bottas ahead of Renault’s Daniel Ricciardo and Racing Point’s Lance Stroll.

There was more drama on lap 44 when Stroll had a 170mph accident at Arrabbiata 2, from which the Canadian thankfully emerged unhurt, even if his car was badly damaged. The result was further red flags to allow removal of the car and repairs to the barriers before we then awaited the third standing start of the Grand Prix. 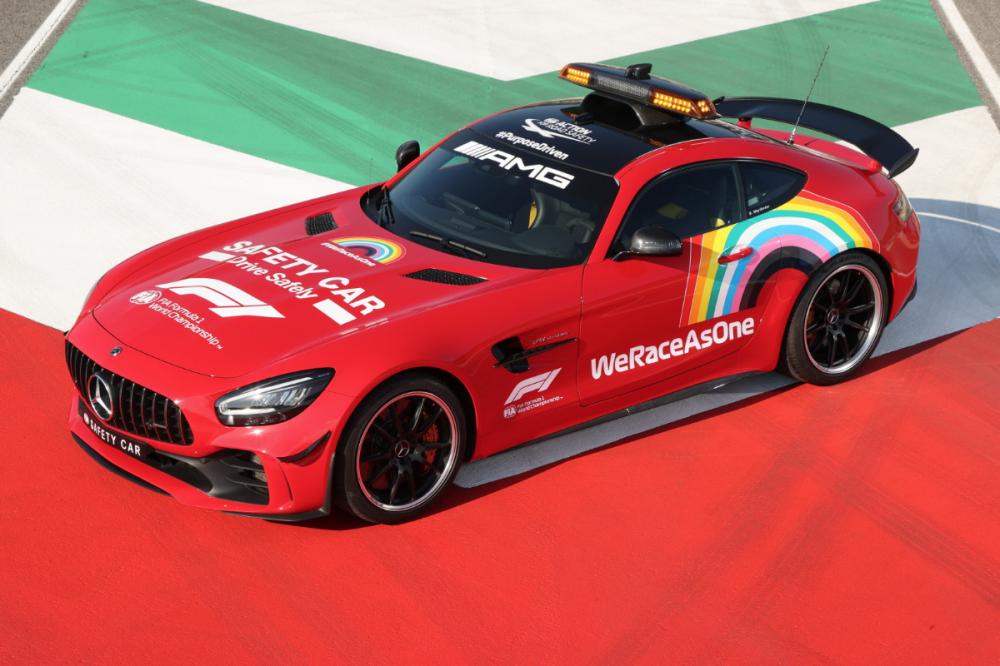 Two silver safety cars are taken to every Grand Prix, but they were painted red for Ferrari’s milestone event
Second on the grid Bottas must have sensed this was his chance to usurp his team-mate, but when the red lights again went out to start the 13 lap sprint to the finish Hamilton led the depleted field away as Ricciardo briefly claimed second place from Bottas before dropping back and then losing out to Albon too. As the chequered flag flew the Mercedes duo claimed the two best steps on the podium, with a delighted Albon joining them for the first time in his F1 career. Hamilton also helped himself to the extra point for the fastest lap, whilst Leclerc ended up eighth for Ferrari, with Vettel two positions behind.

Next up in two weeks time comes the Russian Grand Prix at its usual Sochi home on the Black Sea and this will be the year’s first flyaway event in terms of transporting the F1 paddock and all its contents. As such, it will be another very useful test of the stringent anti-coronavirus measures being rigorously implemented by F1 to keep everyone safe and enable racing to happen on a truly international scale.