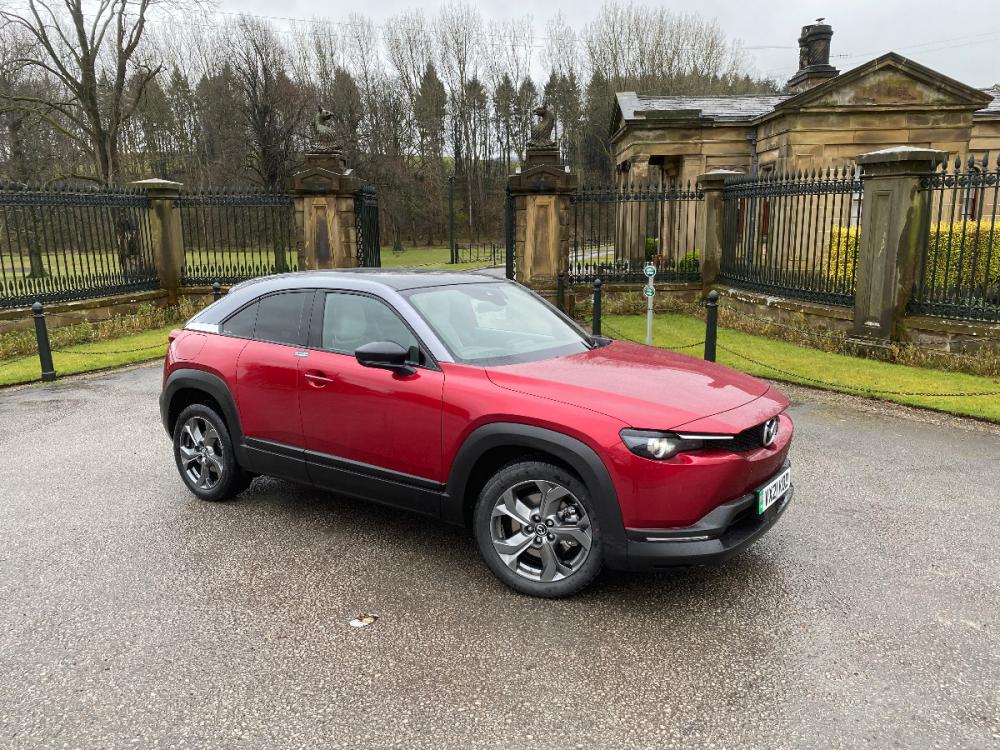 As manufacturers rush to offer electric cars to a still largely sceptical audience, Mazda has taken its time with a more considered approach. It sees the electric car as something to compliment its range of internal combustion engine vehicles, at least for the next few years. Sensible, I would say.

As such it has chosen to give its brand-new car a smaller, lightweight battery, the aim being to improve driving dynamics, lower cost and shorten the charging time. 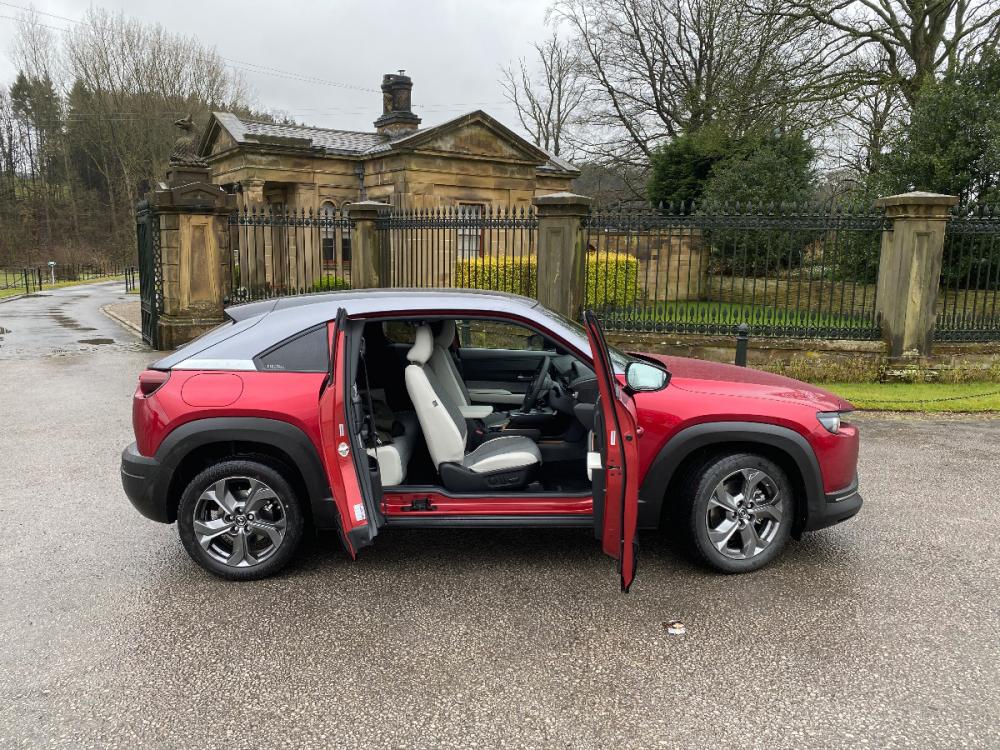 The regional launch was on home territory, being staged at Broughton Hall just outside Skipton, so for once it a was just a short hop to get behind the wheel.

The MX-30 is certainly distinctive and boasts an almost coupe like shape, whilst adopting an SUV stance. It is certainly a car to turn heads, which is no bad thing.

Under the conventional looking bonnet sits a small 35.5kWh battery with a modest power output of 145PS. The combined range is stated at 124 miles, with city only driving boosting this to 165.

Fully charged, my brand-new test car, with almost no miles on the odometer, was indicating just 99 miles fully charged. 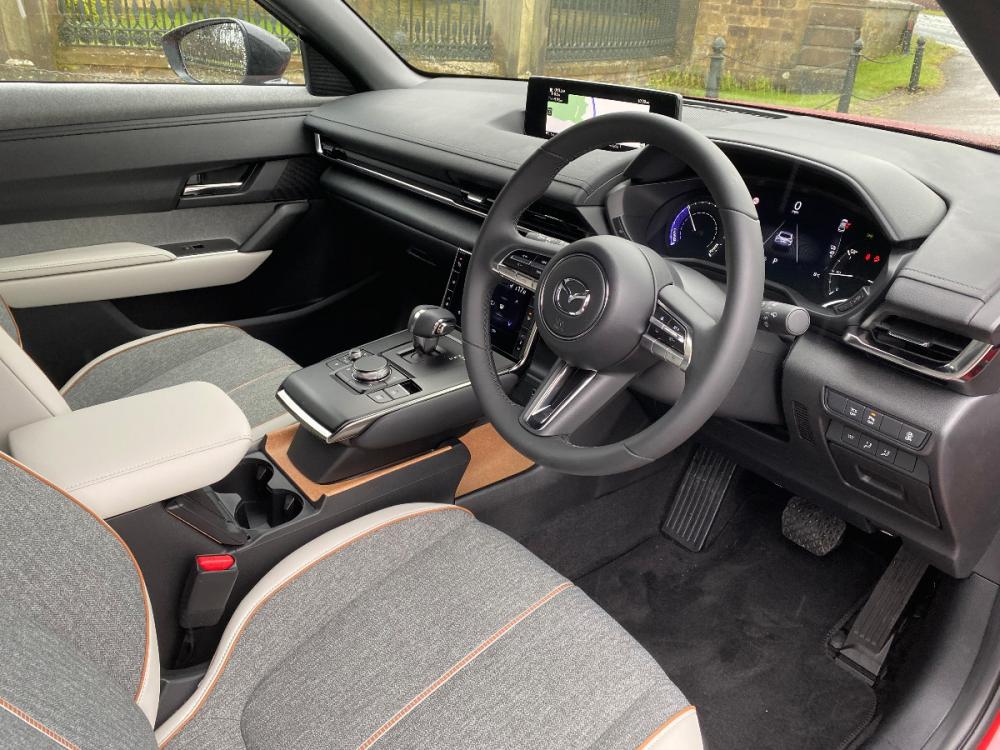 Mazda says that the average daily journey is just 26 miles and by their way of thinking, the MX-30 will work for many and they may well be right. A free home wall box charger is supplied with the limited run of First Edition cars, so if you have off-street parking, you may well be spared the lottery that is public charging.

The MX-30 comes with three familiar specs. £28,545 gets you a SE-L model before deducting the government’s plug-in grant, which has been reduced today to just £2,500. This is an odd decision at a time when the aim is to encourage people to switch to electric cars. There is also now a price cap of £35,000 in order to qualify, reduced from £50,000.

SE-L may be the range opener, but it is not short of kit. Alloy wheels, LED lights, a large touchscreen and Apple and Android connectivity are the highlights. Spend another £1,500 for Sport Lux and bathe in the warmth of heated seats, hide behind the privacy glass and gain entry with the keys still firmly in your pocket. 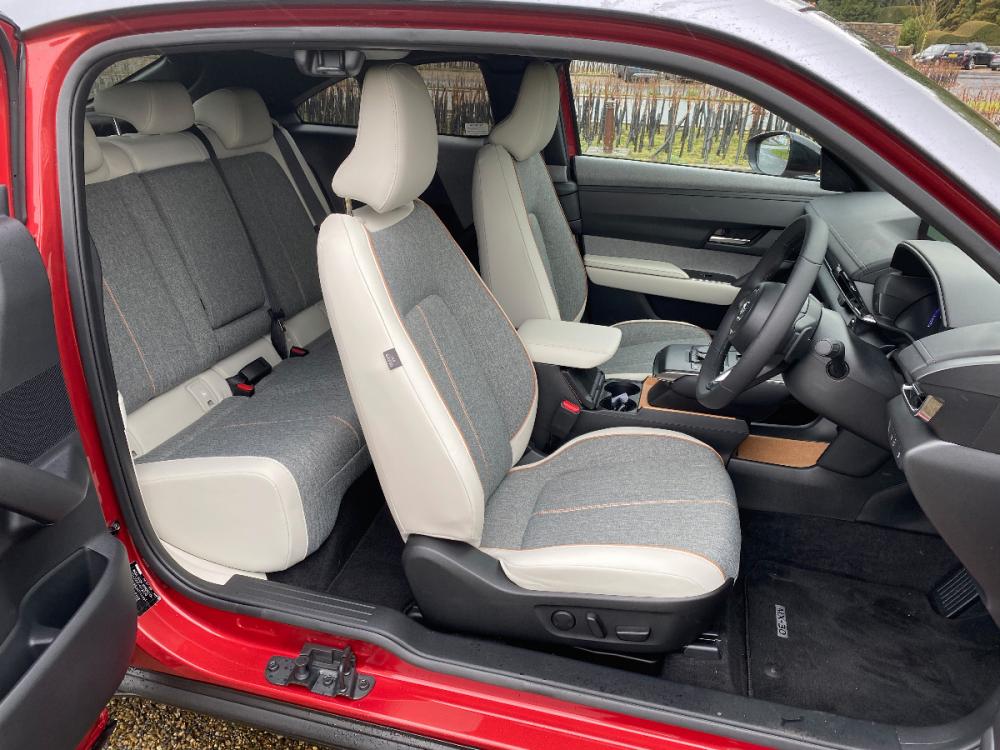 I drove the all-singing and dancing range-topper, a GT Sport Tech, which will set you back the princely sum of £32,845. Bose stereo, parking camera, sunroof and a heated steering wheel are amongst the highlights.

All Mazdas offer a comfortable interior, but in keeping with the MX-30’s green credentials, environmentally friendly materials have been used where possible. Vegan leather, plastics made from recycled material and cork all come together quite harmoniously.

The heating controls have been sensibly separated from the main screen for easy operation and all other controls are logically laid out and easy to understand and operate.

The front seats are easily adjustable to suit and proved to be comfortable. I would have preferred a little more lateral support, but as this is not a sports car, they are probably well judged.

Access to the rear is via a pair of suicide doors, which unusually incorporate the B-pillar. They make access relatively easy, though the front door must be opened first. However, space in the rear is tight and probably best suited to children or adults of shorter stature, unless the front seat occupant is prepared to move forward. 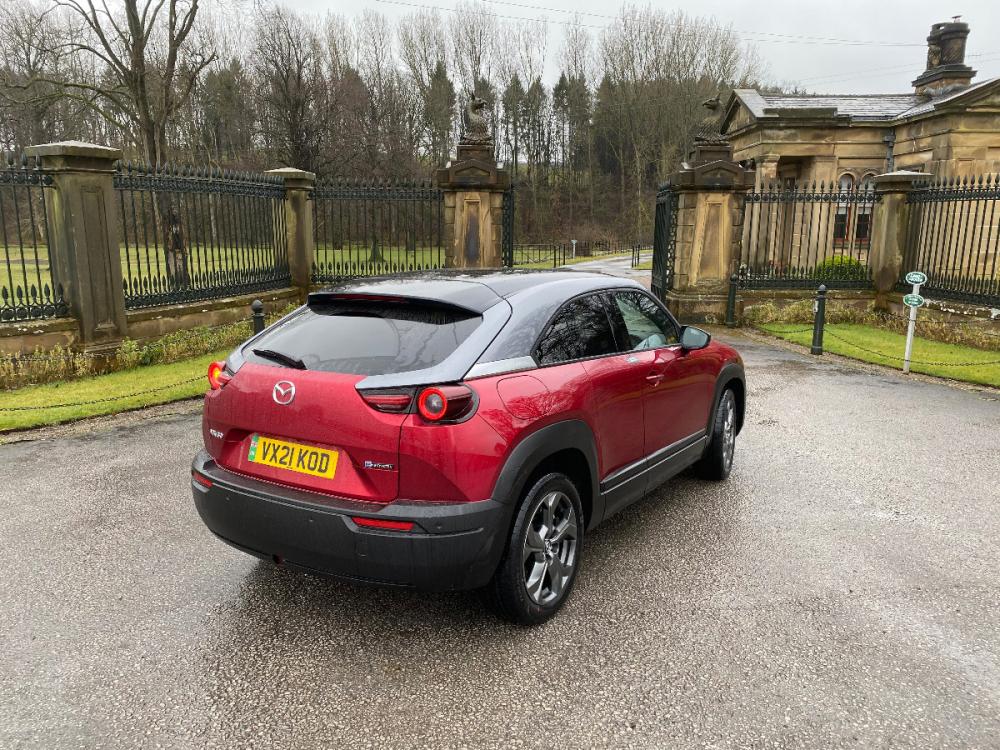 Boot space varies from 341 to 366 litres depending on the model and rather oddly there is no designated holder for the charging cables. A compartment under the bonnet would surely have been easy enough to incorporate.

Mazda had prepared a 50-mile or so circuit through the Dales for us to get acquainted with their new offering. It offered a reasonable mix, though without much urban driving. The modest powered battery does not offer the quickest of getaways and on some of the faster sections of the route, I would have liked a touch more get up and go. If these things interest, the 0-62mph sprint time is quoted at 9.7 seconds.

However, the MX-30 proved to be surprising adept at dealing with the challenging test route, undertaken in very wet conditions. The handling felt safe and composed, with perhaps a tad too much body roll in extremis. The payoff is an extremely comfortable ride, which will be an undoubted boon for a car likely to spend much of its time in an urban environment. 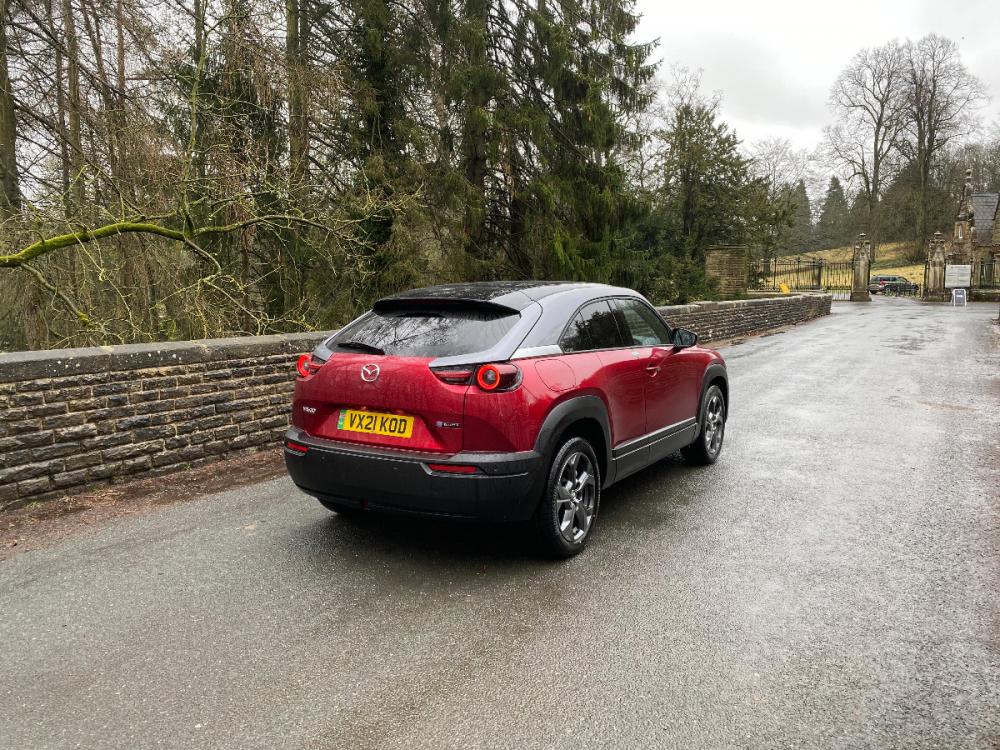 There is a noticeable whirr from the motor when accelerating, but otherwise the MX-30 remained quiet and refined.


Also by Andy Harris...
The Northern Group Of Motoring Writers’ Car Of The Year 2021Land Rover Discovery Sport – The Plug-in Hybrid Version On TestTake Five To Stop Fraud WeekCool Coupe -BMW M4 Competition On TestTransit Custom Nugget – Ford’s Compact Camper On Test
The brakes are fine, though I would like more regenerative action, not only to help boost the car’s range, but also to make one pedal driving an option.
Rivals for the MX-30 are increasing by the day. The Honda e and MINI Electric are the most obvious and have broadly similar ranges. The MINI offers a fun drive, the Honda a distinctive look and a little more interior space.

However, two my favourite electric cars, the Kia e-Niro and Hyundai Kona Electric offer more than double the MX-30’s range for not a lot more money.

So, there are clearly decisions to be made when choosing an electric car. The MX-30 will not suit everyone, but for those it does, the distinctive looks, premium interior and driving characteristics will bring a smile to the face.

So, good effort Mazda and I look forward to seeing what comes next on your EV journey.