The Moreton North Bridge on the M53 is now fully reopen to public following the successful completion of a major rebuild. 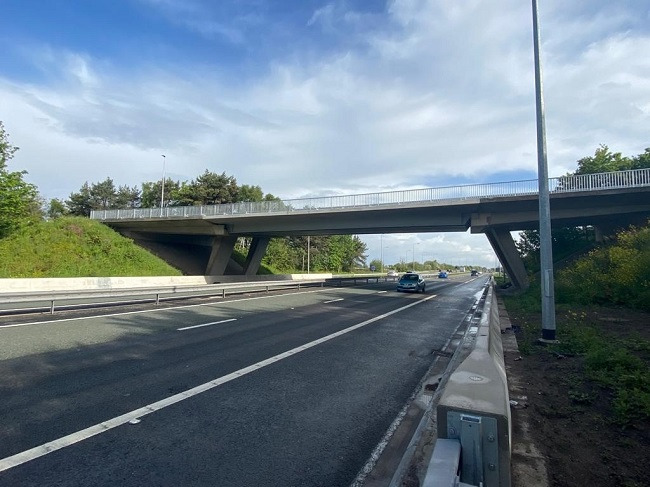 The Moreton North Bridge on the M53 is now fully reopen to public following the successful completion of a major rebuild
The original 50-year-old bridge, which carried the southbound entry slip road over the motorway at junction 2 near Moreton, was removed and demolished before a new bridge was built while traffic remained flowing on the motorway below.

Without work taking place to replace the bridge, Highways England would need to introduce restrictions for HGVs in the future due to the bridge’s aging condition.

Taking nearly a year to build and constructed using steel beams and concrete deck, the bridge was reopened on Saturday 22 May 2021 following the final phase of work which saw the installation of lighting columns.

Mark Mosley, Project Manager for Highways England, said:
“We’ve been working hard since last summer and I’m really pleased that we have been able to complete this work on time, installing a bridge that will last for years to come.

“I know that people will have been inconvenienced by the bridge being closed for so long, but given the age of the bridge and scale of the work it was our only option.

“Thankfully, we were able to minimise disruption to the M53 by completing work while the motorway remained open. We are grateful to drivers and local people for their patience during this vital work.”

Over the last year, the project has seen some key milestones achieved on time and without incident, including the old bride being transported along the M53 for demolition and eight steel beams being lifted into place for the new bridge.

The lifting machines – known as self-propelled modular transporters – use moveable platforms on wheels to carry heavy loads including oil refinery equipment, electrical transformers and even ships.

Operated remotely, each of their multiple wheels could be turned 360 degrees, meaning they could move forwards, backwards and sideways with millimetre precision, allowing for the bridge to be removed without incident.

In January eight steel beams – 24 metres long and weighing approximately 11 tonnes each - were installed into place using a crane, before 182 glass-reinforced plastic panels were laid between the beams to form the base of the new bridge deck.

During the work, a temporary platform allowed drivers to continue to use the motorway as normal while contractors constructed the bridge.


Alongside the bridge work, teams took the opportunity to carry out a wide range of routine maintenance and other works along the route, including:

Renewing the motorway communications cables between M53 junctions 1 and 2
Upgrading the centre reserve safety barriers and road markings on the Moreton Spur Link Road in collaboration with Wirral Council
Upgrading the street lighting on sections on the motorway and slip roads
Vegetation works including trimming of trees, swathe cutting and hedge trimming
Road sweeping and cleaning

The work was all planned carefully and agreed with Wirral Council and other local stakeholders including Mersey Tunnels.

The new bridge will now continue to connect local communities and support businesses with no weight restrictions on this part of the strategic road network.

A similar bridge on the southbound exit slip road at junction 2 opened in 2015 after the old bridge was removed.