Love Orange, by Natasha Randall, is an elegant, skillfully penned evisceration of life as we know it. A frank assessment of the pitfalls of modern American existence is constructed via precise, careful examination, and we would pity the doctor whose job it is to deliver the diagnosis. This compelling account of an ordinary American family is an outstanding debut novel, intrigue keeps you turning the pages: an image of a modern dystopia, painfully rooted in reality, beguiling and ultimately captivating.

The novel opens with Jenny and Hank Tinkley, the parents of the family, moving into their new home. It is styled as "Arts and Crafts with a contemporary twist" that even has some real wood amongst its faux-wood panels; the rest, "well, it's just more hygienic, isn't it?". This house symbolises the facade that is their existence. It looks great, the house, despite on closer scrutiny appearing to be glued together: the dark brown colour scheme gives the impression of weight, when really the furniture is as frail as the humans that inhabit the premises. Observations are closely detailed, telling us exactly what we need to know, whether directly or through inference: we don’t necessarily need to be told the realtor is “mouthy” – the pink gum clenched between her teeth conveys that message distinctly.

Use of dialogue is sparing, it cuts through to make a point. Exchanges between Hank and Jenny are often perfunctory. Any romance is long gone, they just function in their roles, like they are robots in the home Hank has now made “Smart”. The house has a voice, the house knows when to order milk. Hank and Jenny’s roles conform to what tradition dictates. He is the man of the house, she the housewife. He doesn't know what she does day to day, he doesn't know where things are kept, how to do practical chores. That role belongs to Jenny, a role she begrudges but accepts as it gives her a sense of purpose. However, the house becomes her rival in this scenario – when the house can do it all, what use is she? The house threatens to usurp Jenny’s purpose, she is in danger of becoming an unnecessary cog in the machine, destined to become obsolete.

The opening chapters depict a series of scenes using descriptive prose and a few conversations expertly, to objectively pick out and desecrate every possible American suburban cliché. We soon realise how trapped Jenny feels, she tells us that "with secrets, you could escape the reflection that you were trapped within" and these secrets help her to define herself, beyond the shroud that convention dictates. It is a novel set in America but a central theme running throughout explores the very British concept of keeping up appearances.

Jenny is alone – she needs to connect, with someone, something that can make her feel she has use. Through the church, she chooses to write to a prison inmate. She cannot connect with her husband any longer, he seems constantly distracted with all the similarly mundane tasks that give him purpose. After all, his role is traditionally to be breadwinner, and whilst we assume this to be the case, he seems remarkably unproductive - a failed salesman.

Her correspondence becomes another secret and is an important aspect of the plot. Letter writing may be the only permissible way to communicate with convicts, but it is significant that the correspondence is analogue - a physical letter may be hidden, whereas most in the digital world can be traced. Hank has his own secrets: he has the dark web, strictly "for security purposes" - but again this may reflect the need for humans to escape the scrutiny of the digital world. In their own way, they are deprived of their human identity. Instead, they are like robotic beings, their activity monitored by the digital higher being.

In this way, the novel is comparable to Yevgeny Zamyatin's We. In that novel, the characters, the ‘ciphers’ have a strict routine, dictated by the rules of the One State. ‘The Table’ constructs their agenda: mealtimes, sleep time, exercise time, they even have scheduled ‘sex time’ with an assigned partner. They are human, but this is barely perceptible. The central protagonist, D-503, details the plot through his diary, in which he reveals his dreams and his imagination, both frowned upon in this dystopian society. Their society operates with almost military efficiency, there is no room for personality. They obey the Great Benefactor, who in this modern setting, our modern reality, occupies the position of both the convention that we all aspire to inhabit and the phones and technology that dictate our reality.

This comparison is unnerving because Love Orange might be fiction, but it is, as stated, grounded in reality. I cannot comment on the nuances of American life, but American novelist Christian Kiefer says in a review that Love Orange "is real life inscribed upon the page". And it is painfully real; it seems humans in the western world have become little more than ciphers. 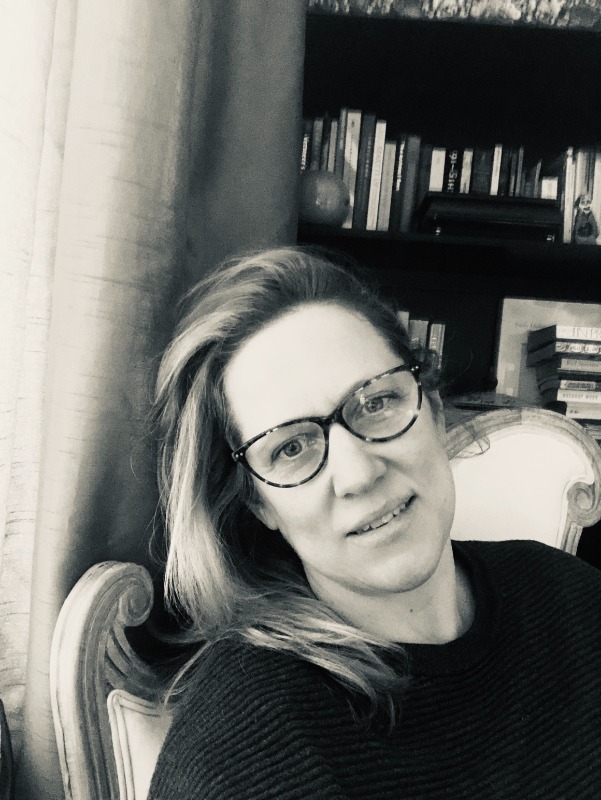 Natasha Randall
Another comparison to draw, and I am not the first to do so, is with Anne Tyler. The focus on everyday Americana is reminiscent of her work, except this novel is Tyler under a dark shadow. The underlying menace is palpable.

Following the family, we are not initially aware of any specific plot but we understand there is more to the characters than their outward veneer suggests. We accompany their activities, keeping up the pretence of dutiful observation, such as attending a church where even the priest seems daunted by his responsibility, but without knowing what exactly that amounts to. He doesn't know the sheep that flock to his stable, he is functioning by custom and rote. He is perturbed by a shift in his own normalcy when disturbing messages appear on the confessional "God phone", that is, confession via text!

Jenny is at times markedly self-aware, but at other times blind to the obvious. We come to see that her actions are driven by a fear that is her constant companion. At times she appears to want to police even her own inner thoughts, lest they be revealed. She is, in effect, keeping up her own appearances.


Also by Caroline Spalding...
Review: The Children Of Ash And Elm - A History Of The Vikings By Neil PriceReview: Lightseekers By Femi KayodeReview: Safe And Sound By Philippa EastInterview: Neema ShahArtistry of Lancashire - Michael Ashcroft
Her constant search for meaning in a bland environment is depicted through the detailed narrative of the mundane. A paragraph is taken to describe a wooden spoon: we may visualise Jenny standing before the spoon, staring, searching for the detail, anything to distinguish it from the others, perhaps in the same way she would seek a point of difference in her own reflection.

The kids, Jesse and Luke, play a smaller, but equally important role in the narrative. They accompany their father for a camping trip to bear country, they pan for gold and undertake other manly activities – all of which merely exacerbate the striking disconnect between parent and children. Luke, the youngest, is considered odd. His young intellect does not want to be spoon-fed fact, or supposition: he wants to learn for himself. His passion for geology is a manifestation of how he wants to understand the real world, and not be numbed by the digital. He is sent to a therapist, who, seen with the clear, candid lens of a child’s eyes, seems little more than a quack. They discuss history and she tells him "the problem is we don't have videos and movies about that time. We have to imagine it because the only thing we have is a few books". In two sentences we have an admission of dependence on technology, that imagination is a poor substitute and that books serve no purpose. It tells us that tech is king: again, we are but ciphers to the Great Benefactor.

We come to see the need the family has for one another. The cogs of the Tinkley machine don’t run smoothly if they are not aligned. Despite their lack of respective understanding, they are in fact co-dependent. The kids need parental, practical guidance, the parents’ dependence is more emotional – the children are perhaps their crutches.

Towards the end we realise we too have been blind to the obvious: Opioid addiction has been accompanying us throughout. Those who have experienced addiction know how it creeps up, takes over, and when a different path is sought, it may be too late. Addiction can be approached with willful disregard for potential consequences, or it may be a mistaken path embarked upon naively or in ignorance.

Here, it provides a release. It soothes the inner torment, helps escape the oppression of the quotidian. It does not begin with conscious choice, but the drug has the upper hand and again represents the cipher metaphor, but here human is coerced by chemical, not machine. It is a testament to the scale of the opioid epidemic, entering even these most "respectable" of households.

Love Orange is a neat but utterly ruthless dissection of modern existence - the frailty of life twinned with the consequences of poor choices made in ignorance. Next time you traverse a suburban street with perfectly manicured lawns, don’t try to look beyond the windowpanes – you might not like what you see. Appearances, after all, are nearly always deceptive.


Love Orange is published by Riverrun, an imprint of Quercus.
More in this series...
Review: Lightseekers By Femi KayodeAn Interview with Alice Ash - Author of Paradise Block‘ …Really Real Poor People, Surviving Alone Together’: Paradise Block By Alice AshInterview: Neema ShahKololo Hill By Neema Shah: A ReviewInterview With Catherine Menon - Author Of Fragile Monsters‘Ghosts Everywhere I Look. Ghosts Everywhere I Don’t’: Fragile Monsters By Catherine MenonInterview: Bethany CliftLast One At The Party By Bethany Clift: A Review'There Is No Such Thing As Fate, Because There Is Nobody In Control': My Name Is Monster By Katie HaleInterview With Frances Quinn - Author Of The Smallest Man'A Hero Of Our Time!': The Smallest Man By Frances QuinnInterview: Thomas McMullan, Author Of The Last Good ManReview: The Last Good Man By Thomas McMullanInterview With Nikki Smith - Author Of All In Her Head'I Don't Know Who I Am Anymore': All In Her Head By Nikki SmithHannah Tovey: An InterviewInterview With Cat Walker - Author Of The ScoopThe Education Of Ivy Edwards By Hannah Tovey: A Review99 Not 42!: The Scoop By Cat Walker