I’ve never been a particularly big television watcher, but with more time on my hands than usual during lockdown, and often against my better judgement, I’ve found myself watching far more television than at any other period in my life.

The BBC's daytime news coverage appears to have been infected with the Boris Johnson inappropriate optimism vibe: all jarring smiles and desperate asides. 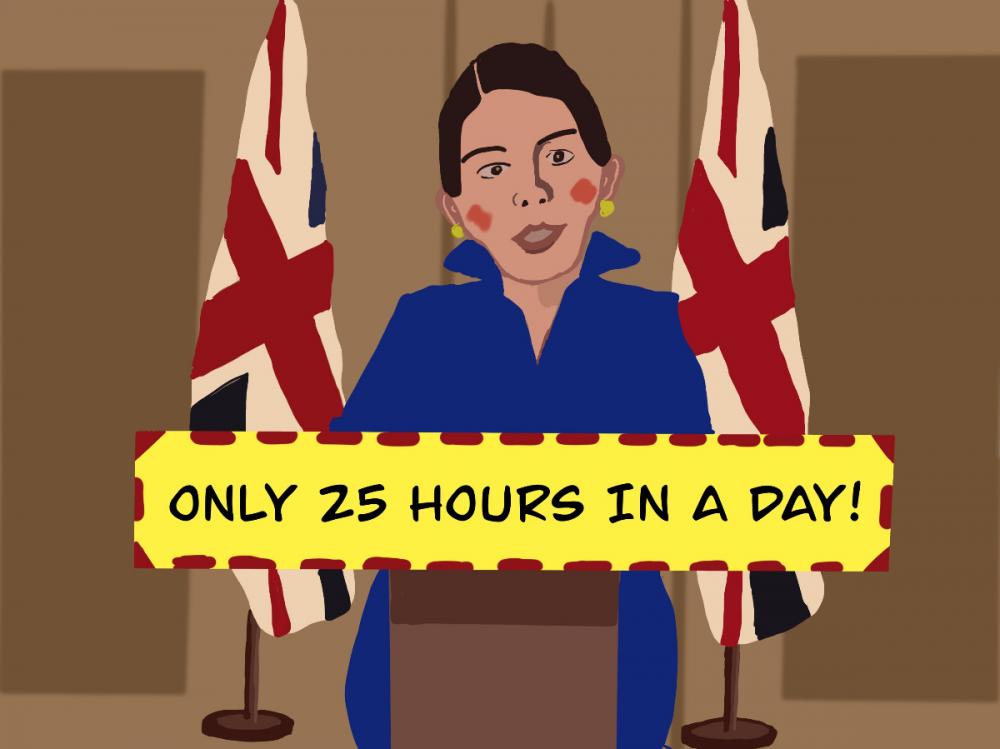 In an attempt to escape from wall to wall gloom, the BBC reported on the 'One World: Together at Home' charity concert organised by Lady Gaga. Recorded at musicians' homes from around the globe, what followed was a race to the bottom of the conversational barrel, as the two presenters discussed in excruciating detail the décor, fixtures and fittings of each home, and the fact that Ellie Goulding appeared to have only one wall socket.

To be fair, with broadcasting time stretching into eternity, it's a hard gig; one memorable week at the start of lockdown consisted solely of regular updates on Captain Tom's fundraising total, alternating with BBC North West's chirpy drumming weatherman bashing his high hat to the BBC news theme.

To compound the general air of surreality, over on the rival channel, Piers Morgan has become the unlikely hero of the Great British Public, squaring up to a succession of under-prepared Tory government ministers who are unwilling, and unable, to answer even the most straightforward of questions, trotting out lies and platitudes in equal measure.

Amazingly, in spite of the increasing number of deaths, the Prime Minister was reported to be in very good spirits, nay ebullient, on leaving hospital after his brush with death. I can't be the only one thinking that it would have been more appropriate for him to be feeling closer to the rubbish end of the emotional spectrum, or as Victoria Wood might say 'speculum'.

He wasn’t exactly chomping at the bit to get back to his duties either, preferring instead to ease himself gently back into the saddle, leaving an increasingly twitchy, hollow-eyed Matt Hancock and pulsating veined Dominic Raab to deputise at daily press briefings and PMs Questions.

Speaking of press briefings, these two Cabinet 'heavyweights' were joined by a lacklustre B team of no talents, consisting of: George “useless“ Eustice, Robert “generic” Jenrick, and Alok “who?” Sharma. One thing they all have in common, apart from owning three or more homes, is a misplaced confidence in their own ability. Exuding faux gravitas as they approach the podium, it takes less than a minute for us to discover they’ve been promoted way beyond their limited abilities. An excruciating hour later, they’re driving smugly back to their respective luxury cottages in the Cotswolds thinking, “Job done, knocked that out of the park!”

Bringing up the rear is the Culture Secretary Oliver Dowden who is a dead ringer for the wimpish Martin in the 80s Sitcom ‘Game On’, and Gavin Williamson the Education Secretary, who bears an uncanny resemblance to the child catcher from Chitty Chitty Bang Bang.

The numerically challenged Priti Patel was demoted to the weekend graveyard shift briefing - presumably where she could do the least damage- after she was heard to say, “There are only 25 hours in a day”.

Despite resembling a cross between a children's TV presenter and a trainee estate agent, the Chancellor, Rishi Sunak is perhaps the most convincing in terms of presentation, but then, the ability to chuck money around obviously helps his street cred.

In the same way that two years ago government ministers were instructed to assume the ‘power pose’ whenever they found themselves in front of a camera - see cringeworthy photos of Teresa May, George Osborne, Sajiv Javed et al standing with legs akimbo - the current fashion is for upwards hand movements to project positivity. But the hapless Tory media team must be banging their heads against the wall in the room next door, as none of their clients seem able to convincingly deliver a simple hand gesture, never mind a press briefing.

Chief Medical Officer Chris Whitty has aged exponentially over the past few months and is now starting to look increasingly queasy whenever the government’s mantra of, “following the science and taking the right steps at the right time“ rears its ugly head; it’s only a matter of time...

Meanwhile, Deputy Chief Medical Officer Jennie Harries is delivering masterclasses in how to deflect tricky questions. One phrase that’s been doing a lot of heavy lifting is: “that's a very important question and you're absolutely right to highlight it”, before proceeding to answer a completely different question entirely. It’s a dark art, and her mastery of it is breathtaking. However, someone should really take her aside and point out that, “I’m happy to answer” and “ I’m delighted to announce”, is not quite the tone she should be going for when presenting graphs which include tens of thousands of deaths.


Also by Elaine Annable...
New Year, New You? No Thanks!The Great British Test And Trace FarceStrictly Self-IsolatingStrictly: The LockdownThe Twitterverse
The Deputy Medical Officer - the inscrutable Jonathan Van Tam, or ‘JVT’ as he was called at the start of the briefings when they were all chums - has been a solid performer until recently, when he was asked about Dominic Cummings’ trip to check out his eyesight. His reply, “ In my opinion the rules apply to everyone”, revealed an inconvenient compulsion to tell the truth, which has led to his absence from further briefings.

Passive aggression seems to be the default setting of most government ministers even when asked perfectly reasonable questions: Dominic Raab‘s, “Can I gently suggest“ and “you might like to consider”, can be translated as, “How dare you challenge me, I really can’t be bothered to answer this question, give me the respect I’m due, you underling!”

Dr Rosena Allin Khan was famously the recipient of a memorable ‘watch your tone’ rebuke from an increasingly churlish Matt Hancock. This rebounded on him rather spectacularly the following week, when the speaker, Lindsay Hoyle, threatened to remove him from the Commons Chamber due to his constant chuntering and lack of respect towards Sir Keir Starmer at PM's questions.

In the hands of Boris Johnson this weekly event has turned into a complete misnomer, as he consistently refuses to answer any questions; preferring instead to bluster, obfuscate, and bang threateningly on the dispatch box whilst fiddling with his pen, which goes on a meandering journey in and out of his jacket pocket. He seems to have misunderstood the whole point of the exercise and has decided it is for the Prime Minister to ask questions of the Leader of the Opposition; maybe the two could swap places...

In normal times it’s difficult to take the government seriously, but sporting shaggy lockdown hairstyles it’s now virtually impossible. Boris Johnson is leading from the front, showing the rest of his cabinet a clean pair of heels in the ‘unkempt and unstable’ stakes. Known to deliberately ruffle his hair prior to making a public appearance, he appears to have reached peak tousleness by investing in a Van de Graaf Generator.

Sir Keir Starmer’s hair by contrast is immaculate, and even has its own parody Twitter account - ‘Keir Starmer’s Hair (It’s Forensic) a left leaning haircut’. Seemingly impervious to gravity and prevailing weather conditions, it has been holding its shape magnificently.