You might not have heard of Glaswegian singer-songwriter Kerri Watt yet. Already no stranger to the stage she has in the past starred in musicals such as Jekyll and Hyde.

Thankfully her transition from musicals to the world of music seems to be the right move on this appealing debut. 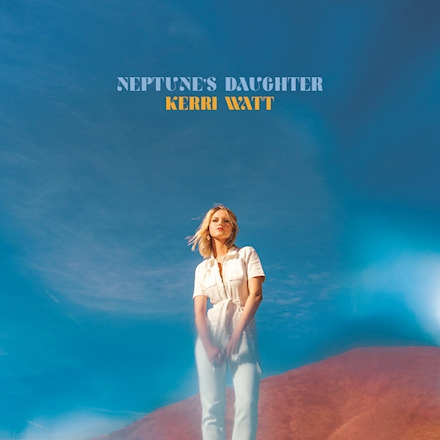 Delayed by the pandemic her debut album was recorded in 2018 with Texas based producer Machine who is probably better known for his work with rock acts such as Clutch, Lamb of Gold and Fallout Boy.

Neptune’s Daughter though is as far removed from a rock album as you can get, think more country flavoured songs that you might associate with Ward Thomas, The Shires and The Wandering Hearts.

It is only on the opening track, 'All The Worse For Me' where the heavy rock influences come in on a track that could be a latter day Robert Plant track. Built around a big guitar riff the epic track gives a false impression of what the listener might expect next.

Moving to California when she was 16 the track 'Kissing Fools' is a tribute to all the movies that Watt grew up listening to. I think she must have liked Shania Twain too as the song sounds like it come have come off one of her albums. Built around a subtle melody, like most of the tracks here it weeps into your sub consciousness and you find yourself remembering the track all day.

A common theme across the songs is about getting away from it all and exploring, this is witnessed on 'Band of Gold' where it’s a case of throwing some blankets along with a blanket in the car and having a picnic. Chances are you would have better weather to do this in sunny California than rainy Glasgow!

The sunny disposition of most of the songs comes across well and producer Machine has let that come out in the production rather than bog them down with a hard and heavy production - what could have sounded gloomy sounds very optimistic.


Also by Graham Clark...
Interview With Daniel DonskoyMidge Ure Announces 2022 TourInterview With Kerri WattThe North Will Rise Again With The Charlatans And The Lightning SeedsSheffield's Def Leppard Launch Digital Museum
The title track, 'Neptune’s Daughter' has a chorus that runs into an 'All The Young Dudes' type vocal refrain. Probably one of the best tracks on the album the lyric has a lot of nature and water references. Uplifting, this country tinged track has a pop twist to end on a grand finale.

'Cut Me Loose' is a big stompy tune that would not sound out of place on the Radio 2 playlist, yes there is a rock undercurrent running thorough the track but the melody is left to steal the spotlight.

Jessie has that sunny vibe that Katrina and The Waves supplied on their hit, 'Walking on Sunshine'. After the last 10 months we have all been through the song sounds a great pick me up. Apparently Jessie is based on the part of Lucy in Jekyll and Hyde, the lyric might be depressing but the overall feel of the song is so upbeat.

The album ends on the ballad 'I Wanna Sing For You' which is dedicated to her Grandma and Auntie who passed away within three weeks of each other. If they could hear this debut album I’m sure they would be very proud.