Why not celebrate World Rum Day and England getting into the European Championship final. Hawksbill Caribbean Spiced Rum has created the ultimate handbook to allow the nation to create some best-loved rum cocktails to celebrate the big weekend.

Hawksbill Caribbean Spiced Rum unites the very best rums from Guyana and Trinidad, adding its own distinctive combination of spices to create a delicious flavour profile suitable for many different drink styles and cocktails. On top of that, Hawksbill is on a mission to help protect the endangered Hawksbill Turtle, donating 10% of its profits to conservation projects.

Whether it’s white rum, aged rum or Hawksbill’s very own spiced rum, there are endless creations to be made with this versatile spirit. From a refreshing mojito, tangy daquiri to a nostalgic pina colada there’s something for everyone – and once you’ve read this, you’ll be ready to impress lucky drinkers with your cocktail history knowledge, too!

Hawksbill has rounded up its top rum-based cocktail picks below, and for delicious step by step guides for recreating these cocktails at the home with Hawksbill Spiced Rum, take a look at their recipe collection.

The effects of this drink are the reasoning behind its name – even back in the 1900’s it was considered so strong that bartenders were only allowed to serve two per customer. Zombies have been around since the 1930’s and were created by Donn Beach, who created the drink for a customer complaining about a bad hangover. Donn then created this ultimate hair-of-the-dog combination masking its high alcohol content with a tasty combination of fruit juices.

Shake the rums and fruit juices in a cocktail shaker with ice. Strain into a hurricane glass with ice, then slowly pour in the grenadine to colour the drink. Garnish with pineapple and a cherry.

Build all ingredients in a glass with ice. Garnish with a mint spring and lime wedge.

Shake all ingredients first with ice, strain from the ice and shake again. Dirty pour and garnish with a pineapple leaf and grated nutmeg. 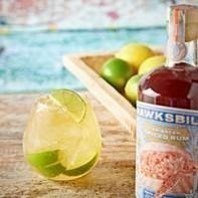 Starting with the ‘dark’, back in the 1800s, William Gosling was selling liquor in London dreamed of venturing to America with his son. Off they went in their ship, but unfortunately their ship never arrived. Instead, James Gosling set up in Bermuda with the Gosling’s shop where they produced and sold one of the world’s best and most distinctive dark rums. They did this until 1914 when they started distributing their rum in champagne bottles, which were sealed with a black wax, eventually giving the rum its distinctive name – Gosling’s Black Seal.

Think of the Dark ‘n’ Stormy as a slightly elevated rum and coke. Pour the rum into a glass over ice, top with ginger beer and garnish with a couple of lime wedges, squeezing them before you drop them in. Enjoy!

Making its way to America from Jamaica, this cocktail’s recipe was inexplicably written in verse in every magazine that published the drink! Here’s the recipe from the Kansas Star in 1903: “One of sour, one of sweet, two of strong, and one of weak.”


Stir all ingredients, minus soda, over ice in a pitcher. Add soda and stir briefly to ensure fully mixed. Serve into a rocks glass over crushed ice and a mint sprig for garnish.

Shake all ingredients first with ice, strain from the ice and shake again. Dirty pour and garnish with a pineapple leaf and grated nut meg.