Interview With Jean-Jacques Burnel From The Stranglers 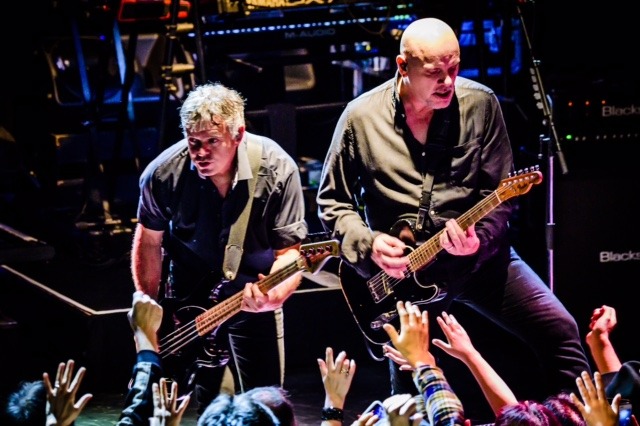 (L-R) Jean-Jacques with Baz Warne Photo: Hiroki Nishioka
From their early days as punk pioneers The Stranglers has been one of the most successful groups of the genre. The singles No More Heroes, Something Better Change and Peaches became punk classics.

The band released a new album last year entitled Dark Matters, which was their eighteenth album and their first one to reach the Top Ten album chart since 1990.

How did it affect the band when Dave Greenfield (keyboard player) died from Covid?
It came as a huge shock when Dave died in May 2020 from Covid. We did think that perhaps the band had come to an end - we had a good run of success so maybe that was the time to quit.

We had recorded a lot of the new album, Dark Matters with Dave playing on the album so we all thought that we should complete the task and finish it off.

Is the next tour going to be the last big Stranglers tour?

I hope so as we need a better equilibrium between composing and playing live. I love the UK and France and I now live in France but I do miss the British people.

The band toured with Alice Cooper a few years ago, what was that like?

It was great - we actually got asked to do the tour. Alice was a real gentleman. It was a different audience to our own and gave us a chance to play to people who would not necessarily come to see us.

What are you most proud of with The Stranglers?

Despite being written off by many people over the years, we have always come back and continued to be successful. Sometimes with bands the success wanes so they split up, we have always put up two fingers to whoever has tried to write us off. Yes, we have had our ups and downs as most bands do, but through the bad times we have always got through them and returned stronger than ever.

Are you planning on recording any more solo albums?

No, I am concentrating on the band. We are looking forward to the tour. We have eighteen albums crying out to be played. We try to change the set list around every night. People can tell if you are going through the motions otherwise you end up becoming a cabaret band.

We stopped playing Peaches eight years ago as we got fed up of playing it but we now play the song as it feels fresh again.

Humans need to feel each other and to us playing live is a form of human communication. The tour is going to be our last big one and it goes all over the UK including the north!


The Stranglers play the following northern concerts in 2022: