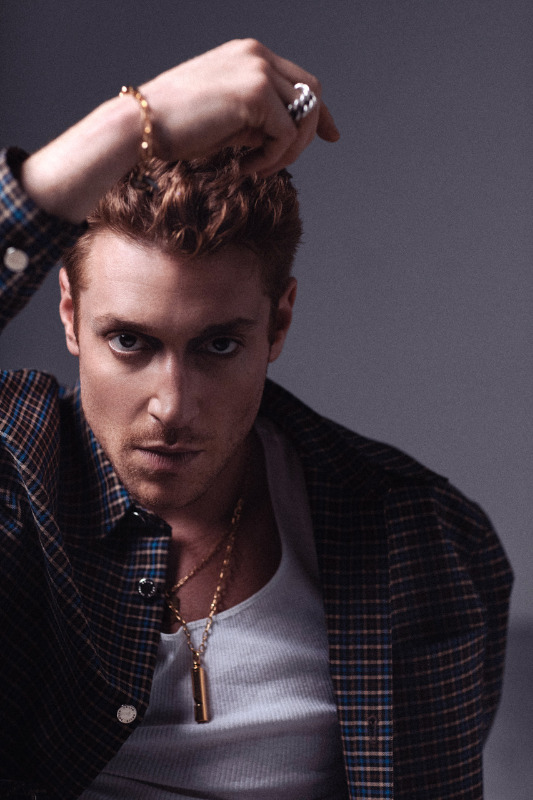 2020 continued to be a year of new beginnings for Daniel Donskoy. The cosmopolitan actor and musician with roots in Moscow, Berlin, Tel Aviv and London shows no signs of stopping after the release of his single '24'. The video was viewed more than 60k times in the first 4 days after the release, and now he shares his soulful new single 'Robbed Me'.

'Robbed Me' continues his way through a world of electronic infused R&B with retro pads and vintage drum samples. Daniel takes us into the sound world of the late ‘90s, urging us to reminisce about that carefree time and feeling bereft after a very intense relationship ending.

I asked Daniel about the new single, his acting career to date and find that he has a connection with York.

Your new single 'Robbed Me' is quite a moody track, who were your influences?

There is such a mixture in there, my dad was a fan of Jamiroquai and my mum was a fan of Sting, I actually saw him in concert in Berlin at the International Music Awards. I used to listen to a lot of Gospel music , Russian music, so yes there is a lot of different influences in there.

Have you ever been robbed or had anything stolen from you?

To be honest I have never been robbed, I think though as a society we rob ourselves, in this digital age everyone seems to be so obsessed with being liked especially on the internet which I think robs you from having a connection with yourself. My sister is 10 years younger than me and I can see the difference in attitudes between her and myself.

You were born in Moscow how did you eventually get to England?

It has been quite a journey - life has thrown me from one place to another. My family travelled quite a lot, I actually went to school in Tel Aviv and studied later in Berlin but I always wanted to get into the arts but really the best place to do that in Europe is in London. I got a scholarship to go to an arts and drama school and basically worked so hard to perfect my craft.


Also by Graham Clark...
Now 70’s Glam Pop (Sony Music/Universal Music On Demand)El Gato Negro In Leeds Gets Ready To Re-open In MayDavid Walliams Billionaire Boy Drives Into The North This SpringUB40 ﻿Are Back Bigger Than Ever With New Album And TourSlowly Slowly - Race Car Blues Chapter 2 (UNFD Records)
What was it like appearing in The Crown?

That was a big achievement for me as before that I was getting offered roles as a Russian villain or a German mobster but I really wanted to play a British part so the part as James Hewitt was a big stepping stone for me. The first day of shooting was my birthday and Olivia Colman gave me a big hug!

Have you ever been to Yorkshire or the north?

I have spent a lot of time up in York, they film the ITV series Victoria at Church Fenton, in the studios is where they have the studio set for the interior of Buckingham Palace. I like Liverpool too, maybe in the future I could move up there.

How has lockdown been for you?

We had to cancel the tour planned for last year, I was doing three series simultaneously which all got pushed back. I’ve not seen my family for months - mu mum lives in Israel and my sisters live in America so it has really put me out of touch with them. Like most people employed in the arts I am beginning to feel the financial strain now.
The time allowed me to re-assess what I want and need in life as normally it is all hustle and bustle all the time, it gave me time too to write my music and to sit down by myself and ask what do I want people to take away from my music.

On the track '24' you talk about inner freedom, are you afraid of anything?

I’m afraid of not doing enough, society makes you feel that others are ahead of you , I’m not afraid of death but there are so many things that I want to do, I have a lot of motivation which in a way has kept me focused on writing the new album.

Did you find a big difference between living in Germany as opposed to living in England?

When I was growing up in Berlin it was not the hip place that it is now. It was so much cheaper than London, in Berlin I was paying €300 for a two bedroom apartment then I came to London and found it so expensive. I found the work ethic here in England much stronger especially in the arts where everyone is more competitive.

I found here too that there is more difference between classes such as accent, people and you tend to more categorised here.