Eleni Kyriacou’s debut novel, She Came To Stay, is inspired by her parents who emigrated to Britain from Cyprus in the 1950s, and is her exploration of what could potentially happen to a young, female immigrant if she fell in with the wrong crowd. She was part-inspired by having read Andrea Levy’s Small Island (a story of post-war Caribbean migration) and realising that nobody had written a novel about Cypriots coming to Britain.

She explains - “My goal is to write stories that reflect a specific time and place, whilst being accessible and heartfelt enough to resonate today”, and she chose the 1950s as the setting for She Came to Stay because it is an era she loves. It is, she says, “the mix of grime and glitter that appeals,” and although conceding that the reality of working class lives was far removed from the glamour of the cocktail bars, jazz clubs and wonderful clothing, the allure appeals nonetheless. For her book she chose Soho as a setting because it was “where ... poverty and despair rub(bed) up against the sparkle of the nightclubs”.

The 1950s was a time of hope: many flocked to Britain in search of a fresh start and a better life. Whilst her parents lived in a council flat and they rarely took holidays, Eleni feels that they had more here than they could have hoped for if they had remained in rural poverty in Cyprus. The excitement and risk associated with coming to another country piqued her interest and therefore inspired the novel.

Eleni was born in the UK but was brought up with a very Cypriot lifestyle and she often felt as if she was caught between two cultures. Her secondary school was ethnically diverse but she recalls one summer when the National Front picketed the school gates, handing out leaflets to the children, with the Anti-Nazi league standing on the other side, protesting and distributing badges, with the police caught somewhere in the middle. As the Union Flag was used by the National Front she associated it with racism and nationalism for many years - it symbolised violence - and Eleni couldn’t help but feel that neither she nor her parents were welcome in the country.

She has experienced prejudice but feels that most people these days would not be so openly racist as they were decades ago. However, she has friends who still experience racism almost daily which makes her question what really has changed. She feels that life for migrants these days is probably harder than during the period in which her parents came to England. At that time, Cypriots were actively encouraged to come to Britain and there was a genuine feeling that immigrants were valued for what they could contribute. She feels that the UK is no longer so welcoming, but that “the immigrant’s dream is still the same: people take a risk for the chance of a better life”. 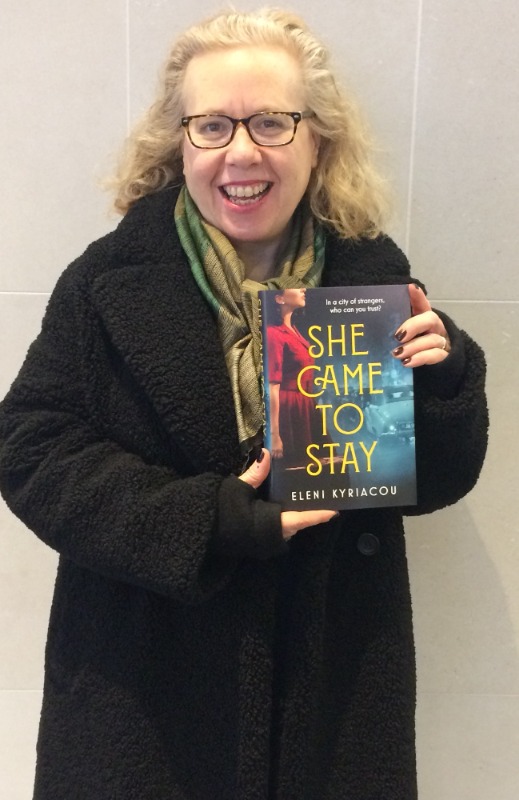 Eleni Kyriacou
Eleni has always loved reading and writing, and following a career in journalism seemed logical as she has “always found other people’s lives interesting”. Writing professionally, she thought, would be a natural progression towards writing a book, but it wasn’t until she had worked as a features writer, then an editor, turned freelance and then reached her 40s that she decided, “If I was ever going to do it I had better make a start”.

She Came to Stay was written over a period of seven years and as an editor, she tends towards “polishing as I go along,” but not until she has undertaken a huge amount of planning, research and preparatory drafts. She tells me that she cannot write about characters without knowing the plot, and it will not be until she has completed a draft that its themes will become apparent. She will then revisit her draft and draw out the themes - every writer has to face the prospect of rewriting; it’s part and parcel of the creative process.

Her biggest challenge was when she began to submit She Came to Stay to agents. She received several rejections and finally, having removed the original prologue and making some slight changes, she had success when her book was chosen from amongst seven hundred applicants for ‘The Future Bookshelf’ open submissions process. This process gives writers the chance to approach publishers directly with their work, without the need of a literary agent. Hachette’s ‘Future Bookshelf’ was launched to “discover and publish under-represented voices”; Eleni’s editor read She Came to Stay and pitched it to the publishers Hodder & Stoughton. Once Eleni had received the go-ahead, she signed up with the Good Literary Agency. She says that Twitter is a useful resource for writers to discover competitions, open submissions processes and new literary agencies.

By writing She Came to Stay Eleni feels she has developed a certain “authorial voice”, though it has evolved organically, and she has “honed (the) style through all the rewrites”. She tries to get inside the head of her characters, know the period they are living through, feel their concerns, know their choice of language – it is this familiarity with her characters that gives them and the story credibility.

She likes to use a lot of dialogue to explore “the push and pull between characters” and whilst she feels that descriptive narrative is important, in historical fiction, to set the scene, she says she doesn’t like “description for its own sake” – however, it has a purpose: to add to the atmosphere or to tell a reader more about a character.

When Eleni writes a scene she will ask herself what her objective is, what she might hope to convey, how she will keep the readers engaged and invested in her characters? She wants to write so that readers will “continue turning those pages into the small hours”.

The publishing of She Came to Stay has realised a lifelong ambition for Eleni and having recovered from the initial shock of disbelief and gratitude, she is now proud of her perseverance. She feels more confident and takes comfort from the invaluable support of fellow writers in the Debuts UK 2020 group, because it has been a long and difficult journey for all of them to get published. However, she is ready to face the same lengthy road towards book two, the first draft of which is due for submission before Christmas. She also has ideas for book three, but for now she is resisting the urge to start writing.

Eleni is an avid reader across a wide variety of genres. She has drawn inspiration from Sarah Waters who “captures the sights, smells and sounds of another time and place (but does not) weigh it down with show-off research”, and she enjoys how Patricia Highsmith creates unlikeable characters who yet are compelling and make a reader care. Contemporary favourites include Brit Bennett, Maggie O’Farrell and David Sedaris but her two desert-island books would have to be Daphne du Maurier’s Rebecca and Little Deaths by Emma Flint. Eleni says that “these books say so much about women who don’t fit traditional moulds, and (reflect) how society underestimates and judges them”.

Her second novel is also set in the 1950s, and one suspects she has spent a huge amount of time researching the period by way of watching films from the 1940s and ‘50s alongside extensive reading, as she did for her debut. She admires these films for their precision, their “tight, smart scripts” their ability to bring the period to life. If, whilst writing, she cannot see the scene she is describing, she knows her readers won’t see it either. She didn’t live through the 1950s herself so her research is critical, and draws also on photographs, first-hand accounts and family stories.

In the present day, however, Eleni is please to report she is very much keeping up with traditional Cypriot idiosyncrasies – that is, having a large, noisy family, a love of children, always an extra space at the table for an unexpected guest and, of course, being very nosy about everyone else’s business!


She Came to Stay is available now in hardback, eBook and audio formats.

The paperback will be released on February 18th 2021 and is available to pre-order via www.tinyurl.com/yychd9gc

Eleni’s website is - www.elenikwriter.com
More in this series...
Review: Lightseekers By Femi KayodeAn Interview with Alice Ash - Author of Paradise Block‘ …Really Real Poor People, Surviving Alone Together’: Paradise Block By Alice AshInterview: Neema ShahKololo Hill By Neema Shah: A ReviewInterview With Catherine Menon - Author Of Fragile Monsters‘Ghosts Everywhere I Look. Ghosts Everywhere I Don’t’: Fragile Monsters By Catherine MenonInterview: Bethany CliftLast One At The Party By Bethany Clift: A Review'There Is No Such Thing As Fate, Because There Is Nobody In Control': My Name Is Monster By Katie HaleInterview With Frances Quinn - Author Of The Smallest Man'A Hero Of Our Time!': The Smallest Man By Frances QuinnInterview: Thomas McMullan, Author Of The Last Good ManReview: The Last Good Man By Thomas McMullanInterview With Nikki Smith - Author Of All In Her Head'I Don't Know Who I Am Anymore': All In Her Head By Nikki SmithHannah Tovey: An InterviewInterview With Cat Walker - Author Of The ScoopThe Education Of Ivy Edwards By Hannah Tovey: A Review99 Not 42!: The Scoop By Cat Walker