Several years ago, various members of the current government wrote a book, Britannia Unchained. In it, they wrote that 'Once they enter the workplace, the British are among the worst idlers in the world'. Who would have thought that they were referring to the staff in Downing Street? There are now known to have been so many parties going on in Downing Street during lockdown that it’s hard to believe anyone was doing any work at all.

The most recent embarrassment was finding out there were two more parties in Downing Street - on the same night! - the evening before Prince Philip’s funeral, at a time when restrictions meant the Queen had to grieve alone.

The Telegraph even revealed that civil servants had taken a suitcase down to the local Co-op and brought it back filled with bottles of wine. Once these revelations emerged, we had the slightly odd statement from a spokesperson that 'Downing Street has apologised to Buckingham Palace'. It’s always nice to see a road making conversation with a building. We should definitely have more dialogue between members of the urban landscape. It could be a Channel 5 series: Structural Integrity - Famous Roads Say Sorry To Famous Abodes. Meanwhile the government spokesperson pondered the indignities they were suffering for their career choices – surely it couldn’t get any worse than this?

As the scandal grew, Boris Johnson’s planned response was leaked to the press. Rather than falling on his sword, he had decided instead to push several other people on to it. 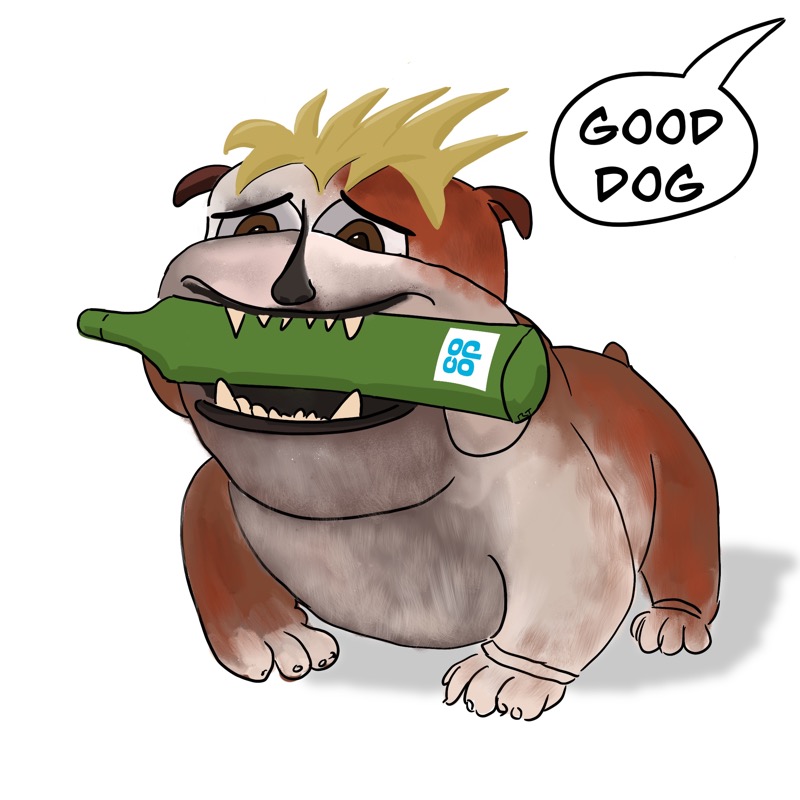 Termed 'Operation Save Big Dog' – honestly, how are we supposed to satirise this? – Johnson’s plan was, as predicted, to blame everyone except himself. Sunshine, moonlight, boogie – they were all to take their share of the blame. Except Gavin Williamson, who was to be knighted for services to… who knows what? Spiders? Fireplaces? Keeping his mouth shut? Not education anyway.

It was reported that Johnson had personally come up with the name 'Big Dog' for himself. I knew he had always fancied himself as the new Churchill, but I’m not sure he meant the one from the insurance adverts. Anyway, I hope the Tory Party has got itself some good pet insurance cover for its dog, though there may be some excess to pay.

The government was forced to deny the reports, with a spokesperson commenting that 'the Prime Minister does not refer to himself as Big Dog', while quietly sobbing into their hands at having reached the nadir of their career and mentally composing a resignation letter. 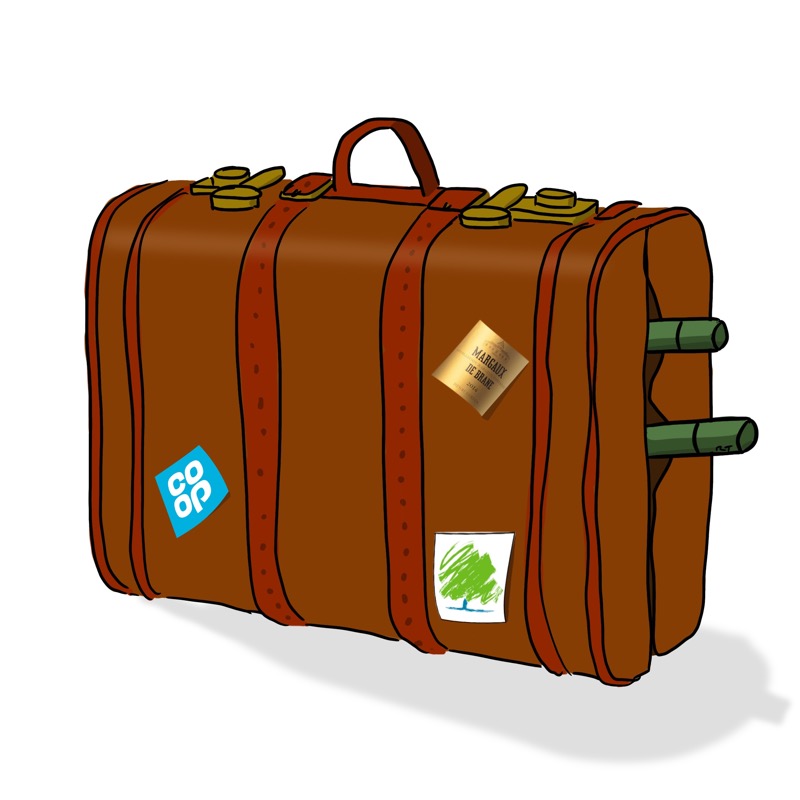 The spokesperson went on to add also that the prime minister 'did not recognise the name Operation Save Big Dog'. That’s fair enough. Johnson also didn’t recognise a party in his own garden at twenty faces.

Liz Truss, the foreign secretary, was asked about Johnson’s position. “He has apologised," she replied. “I think we now need to move on and talk about how we are going to sort out issues.” Yes, indeed. Issues such as - red or white? How many bottles do you think we can fit in a suitcase? Is the DJ booked?

After Dominic Cummings revealed that he – and others – had warned the PM that the party which Johnson himself attended should not go ahead, it was a noticeably more downbeat Johnson who appeared in an interview on Sky. His new defence was that “no one had told him” that the party was against the rules. If only he had listened to some of those government briefings, eh? Or maybe he could have gone to one or two COBRA meetings.

Over the course of the last few weeks, Johnson has gone from denying there were any parties, to being furious that there were parties, to finding out that he was present at the parties but not knowing they were parties, to claiming that no one told him parties weren’t allowed. I think this is a new political strategy called ‘implausible deniability’.

As Operation Flog Dead Horse stepped up a gear, it was announced that Johnson would clean up the culture at No. 10, as though it was something that had been inherited from the previous incumbent, renowned bad girl Theresa May. Her previous misdemeanours include – let me just check this –running through a field of wheat once. Yes, clearly a wrong ‘un.

In a surprising development, it looked like angry Tory MPs had devised Operation Neuter to cut off Johnson’s, er, fightback. One Tory MP defected to Labour just before Prime Minister’s Questions, and former minister David Davis called on Johnson to resign, invoking Leo Amery’s demand to Neville Chamberlain: “In the name of Dog, go!” (It’s possible I may have misheard that.)

Meanwhile, it was reported that Sue Gray P.I. (Party Investigator) had found email evidence that demonstrated senior civil servants had indeed warned that the party Johnson attended should be cancelled as it broke the legal guidance at the time. No doubt Johnson’s defence will now be that he doesn’t read his emails. Or that he read the email, but no one told him what it meant. Or that there needs to be an inquiry to find out if he read it or not. Downing Street has now apologised to the email server. I think that’s all clear: time to move on.

At the same time, a number of Tory MPs came forward to say that they had been 'blackmailed' to vote in Johnson’s favour, with threats to plant hostile stories in the press and to withhold funding from their constituencies. This would constitute criminal activity as it would be a misuse of public funds. Angela Rayner responded by saying that Johnson was 'acting more like a mafia boss than a prime minister'. Would that be the Dogfather? I expect when he wants to make someone an offer they can’t refuse, rather than a horse’s head, he leaves one of Michael Fabricant’s wigs in the bed.

Johnson himself responded to the allegations of blackmail, saying, “I see no evidence.” This is much like Nelson declaring “I see no ships” as he held his telescope up to his blind eye. Then again, even if Johnson did see any evidence, he wouldn’t recognise it.

But still he continues to fight on for his job, hoping to see off a potential no-confidence vote and remain in power. After all, he can’t leave office now - he has only just redecorated. What’s astonishing is that he appears desperate to hang on to his job, despite not actually wanting to do it and seemingly not understanding what he’s supposed to be doing.

Johnson’s latest announcement is to remove all Covid restrictions immediately, though this is probably because he doesn’t understand them. Alcohol can do that to the brain, especially when you measure your drinks in suitcases.

“We’ve been able to lift restrictions faster than any other country in Europe,” Johnson boasted. “That’s because we’re happy to let the bodies pile high,” he might have added.

And there you have it: we all have to learn to live with the virus now. Unfortunately, there are still around two thousand people each week who find they can’t. As for Big Dog – I think we may need a bigger pooper scooper.


Also by Roger Winterbottom...
If Johnson Is On Borrowed Time, When Do We Get Paid Back?It's All Cummings Back To MeParty Favours Or A Gathering Storm For Johnson?When Is A Party Not A Party?Emily Elephant Is Perfectly Fine, But Is Everything Okay With The Prime Minister?