Formula 1 today made its first return since 2019 to the city of Baku for the latest Azerbaijan Grand Prix after the pandemic had caused the cancellation of last year’s event and following a thrilling and highly unpredictable race it was Red Bull’s Sergio Pérez who emerged as the victor. 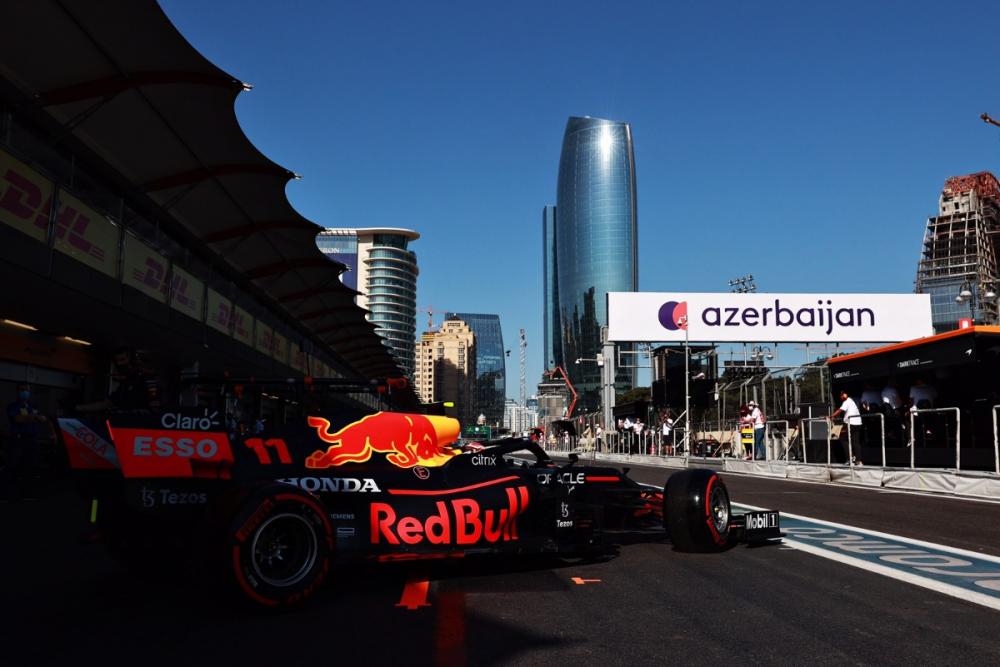 Sergio Pérez claimed the spoils for Red Bull in Baku
This was the sixth round of what should be the longest ever F1 season if Covid issues permit and Red Bull had arrived leading both the Drivers’ and Constructors’ championships for the first time since 2013 following their recent success in Monaco. The Azerbaijan track is, like its Monégasque counterpart, a temporary street circuit, but it has very different characteristics. Being six kilometres in length, it is the third longest on the calendar behind Belgium’s Spa Francorchamps and the new track in Jeddah, Saudi Arabia and its 2.2 kilometre main straight requires a focus on power but reduced downforce. The latter of course then makes the narrower technical parts of the track even more challenging.

The good news compared to Monaco is that the layout of the Baku circuit generates far more overtaking opportunities and there had been 50 passing manoeuvres in each of the last two Grands Prix there. The pit stop time loss is relatively short at around 21 seconds, but tyre degradation can be an issue and the perceived wisdom in the build-up to the race was that the best strategy would probably be to have a single early stop to switch from soft to hard tyres. However, the Safety Car had appeared in half of the previous Azerbaijan Grands Prix to date and its virtual counterpart in 25% of them, so this element could not be ignored in the teams’ strategic planning.

Mercedes’ Valtteri Bottas had arrived in Baku after his botched pit stop in Monaco which had forced him into immediate retirement and cost him an almost certain second place finish. It was actually over 43 hours later when the team had managed to remove the damaged front right wheel back at the factory in Brackley and the usually quiet Finn was keen to question what he felt to be an incorrect accusation by Mercedes team principal Toto Wolff that he had contributed to the problem by not stopping where he should have. The photographic evidence certainly seemed to support Bottas’ case. 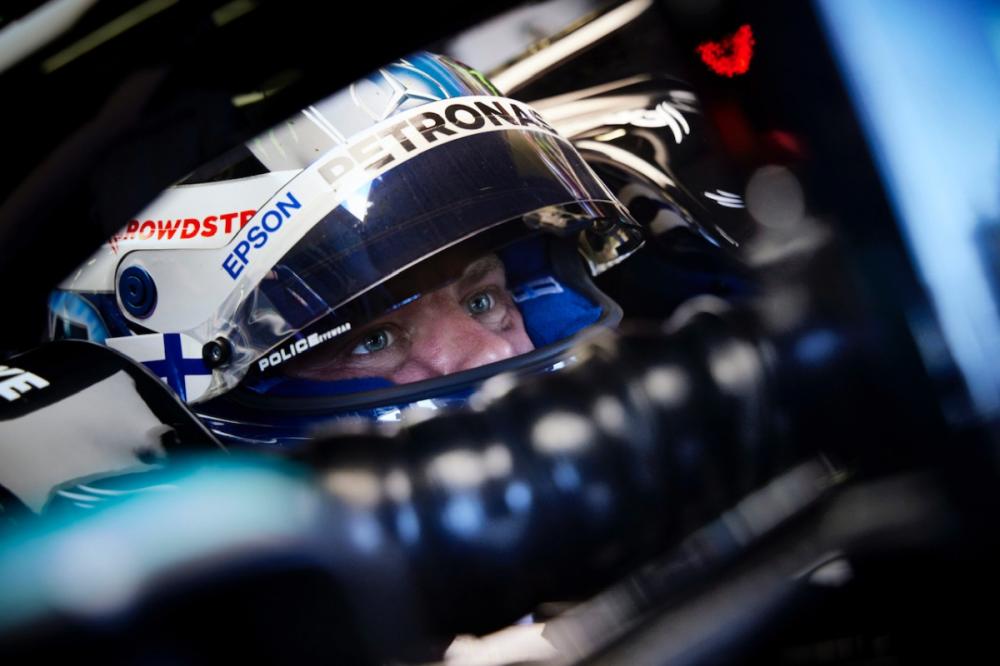 Mercedes’ Valtteri Bottas suffered a difficult weekend in Azerbaijan
There is ongoing speculation too that this may be Bottas’ last season with the team after driving as a solid, if usually unthreatening, number 2 driver alongside Sir Lewis Hamilton since 2017. The favourite to replace him is the highly likeable and very talented 23 year old Mercedes junior driver George Russell, who is currently loaned out to Williams but is understandably keen for his future from 2022 onwards to be finalised if possible before this year’s summer break. This young British driver feels he is now ready to step up to fight for race wins and championships and few would argue with that. A fresh start with another team for Bottas, operating outside of Hamilton’s shadow, might just be what the 31 year old needs to rejuvenate his career and he may return to Williams if Russell heads in the opposite direction.

Formula 1 wouldn’t be Formula 1 without a good old argument about which team is best gaining a performance advantage whilst staying within the existing technical rules and the “flexible rear wing” row was still simmering as the F1 paddock convened in Azerbaijan. The rules are set to be changed with effect from the next race in France, but Mercedes was particularly unhappy that these revised regulations hadn’t been brought in earlier for the Baku event too and was talking of making protests to the stewards about Red Bull’s rear wing and even taking things to the International Court of Appeal if need be. In response, Red Bull’s Dr Helmut Marko retaliated by suggesting Wolff should take a look at the flexing of his own team’s front wings, making it clear that they might feel the need to raise a counter-protest against Mercedes, and the Red Bull team principal Christian Horner pointedly added “If I was Toto I’d keep my mouth shut with the front wing he’s got on his car!”

On the driver front, Marko also advised that Red Bull would not start to consider its driver line-up for next year until at least the summer break as the team concentrates on the battle for both championships. This suggested that the newly arrived Pérez would need to wait some time before knowing whether he will be retained for a second season, but how his form in Azerbaijan was surely to improve his chances.

Elsewhere on the Formula 1 news front, it was announced on the Friday of the Baku weekend that Singapore had decided to cancel its Grand Prix for a second year running due to concerns about an influx of visitors in this still COVID-19 hit time. The F1 authorities are understood to have possible options for a replacement event in the early October slot and the alternatives are being considered, although the races in Japan, Australia and Mexico later this season remain in doubt due to travel and quarantine restrictions. 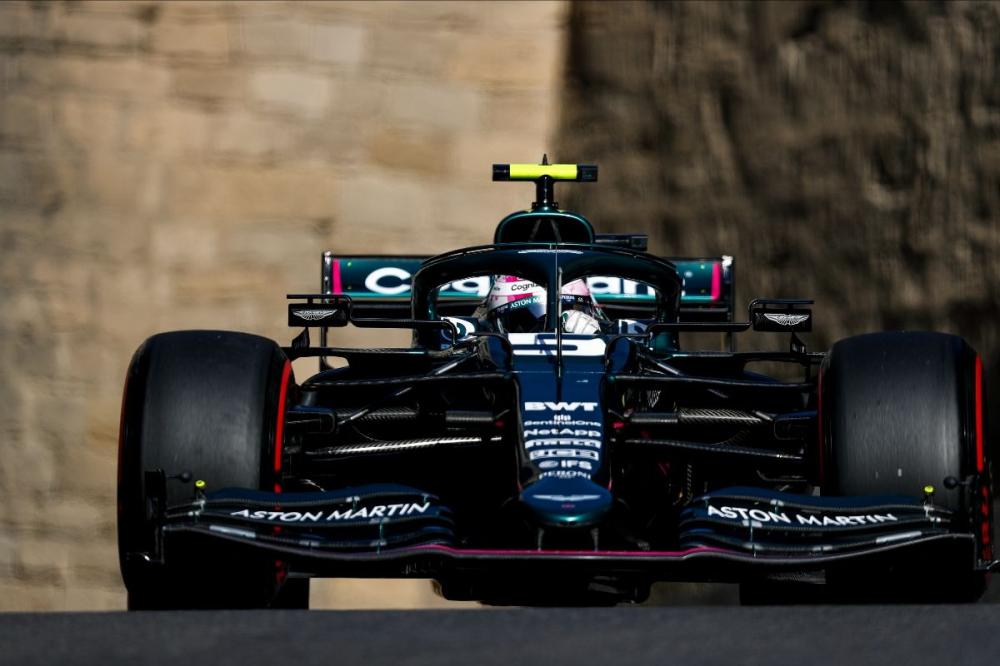 Sebastian Vettel drove superbly to give Aston Martin its first podium finish
Turning back to the ontrack action, in Friday’s incident strewn opening free practice session it was the championship leader Max Verstappen who topped the timesheets ahead of Ferrari’s Charles Leclerc and Carlos Sainz plus Pérez in the other Red Bull, with Hamilton and Bottas only seventh and tenth fastest. Come the later second period Red Bull dominated, with Pérez outpacing his team-mate and the two Ferrari’s the best of the rest. Mercedes though again appeared to be struggling with tyre warm-up issues as Hamilton and Bottas dropped to only eleventh and sixteenth quickest.

It was AlphaTauri’s Pierre Gasly who set the best time in Saturday’s final practice session ahead of Pérez, an improving Hamilton and Leclerc, whereas Verstappen brought out red flags after locking up into Turn 15, making contact with the barriers and having to walk away from his abandoned car. The subsequent qualifying hour began at 4pm local time, but took much longer to complete after four more red flag stoppages.

There was a somber mood within the McLaren team in particular on race day morning following the news that their longtime shareholder since 1984 Mansour Ojjeh had passed away aged just 68 and appropriate black armbands were worn. There was very much still a Grand Prix to be competed in though and that remained their focus as the start neared. 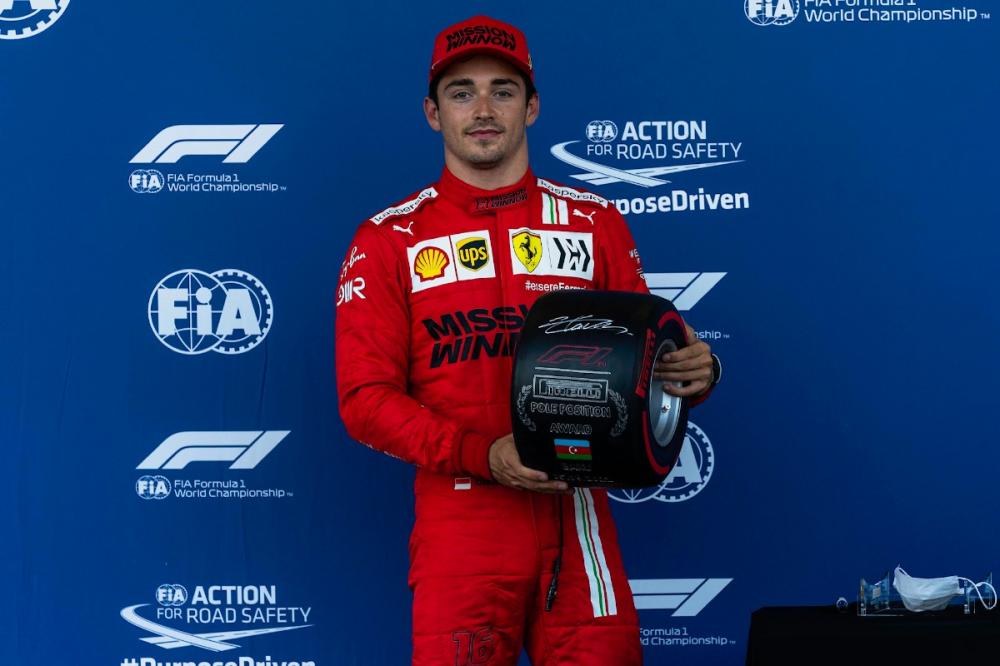 Ferrari’s Charles Leclerc claimed pole position, but could only finish fourth in the Grand Prix
When those famous red lights went out it was only a short sprint to the opening lefthand corner and Leclerc led from Hamilton and Verstappen with a flying Pérez moving up from sixth to fourth position. At the end of the second lap Hamilton slipstreamed past Leclerc into the lead and five tours later Verstappen demoted the young Monégasque to third, with Pérez then also passing the Ferrari just one lap later.

On the twelfth tour Hamilton pitted to switch to hard rubber, but his departure was delayed as Gasly made his way past and Mercedes sought to avoid a potential penalty for an unsafe release of its own driver. Verstappen pitted a lap later for the same tyre change and emerged ahead of Hamilton, with Pérez also soon pitting and rejoining the track in front of the Mercedes driver. This left Aston Martin’s Sebastian Vettel, who had yet to stop, leading from Verstappen, Pérez and Hamilton, and when the German four time champion made his own stop he emerged in an impressive seventh place, driving superbly and silencing his critics following a difficult start to life with his new team.

There was drama on lap 31 when Stroll crashed heavily into the barriers near the pit lane entry after a left rear tyre failure, shaking the Canadian driver and bringing out the Safety Car as Verstappen still led from Pérez and Hamilton. When the Safety Car withdrew at the end of lap 35 there was a clean restart and Vettel swept past Leclerc to fifth position and then Gasly to fourth. As the race was entering its final phase you had to feel for the leading but unlucky Verstappen as he too suffered a 200mph left rear tyre failure after not putting a foot wrong all afternoon. This triggered the return of the Safety Car before the Grand Prix was then redflagged.

After Verstappen’s stricken Red Bull and the related debris had been cleared from the circuit the cars lined up on the grid for a second standing start, with the top four now being Pérez, Hamilton, Vettel and Gasly and just two laps to go. Hamilton appeared to have passed the Red Bull as they blasted towards Turn 1, but the Mercedes driver made a mistake and disappeared into the run-off area before rejoining in last position. This left a thrilled Pérez to claim the victory, although the Mexican was quick to sympathise with Verstappen, saying the Dutch ace should rightly have been the winner. The other two steps on the podium were occupied by an equally happy Vettel and Gasly, with Leclerc, Norris and Alpine’s Fernando Alonso completing the top six finishers. Vettel also won the official F1 fans Driver of the Day vote for a second race running and the fastest lap was completed by Verstappen, although his retirement meant he didn’t earn the extra point. 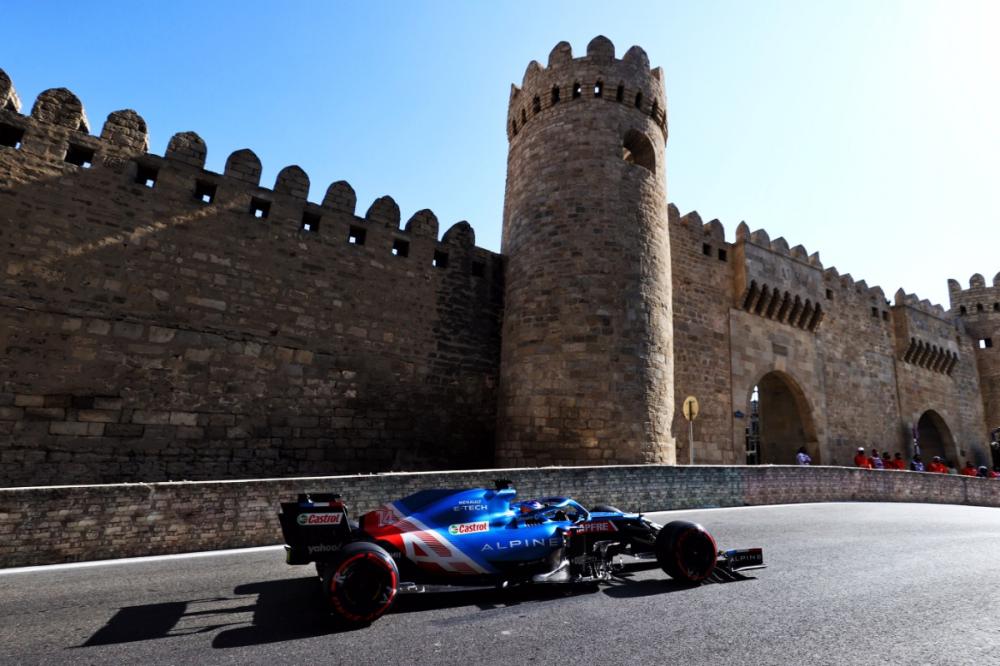 Fernando Alonso was happy with his sixth place result for Alpine
This year’s Formula 1 season now returns to Western Europe for a trio of races across a two week period, starting with the French Grand Prix a fortnight today. Due to Verstappen’s misfortune in Azerbaijan and then Hamilton’s error when he could have gained 25 points on his championship rival, their superb battle this season will continue with the Red Bull driver still just four points ahead when they arrive at the Paul Ricard circuit. Bring it on.

1 Red Bull 174
2 Mercedes 148
3 Ferrari 94
Also by Graham Read...
A Return Visit To Anglesey CircuitA McLaren 1-2 In Italy As Hamilton And Verstappen Crash OutRussell To Mercedes And Bottas To Alfa RomeoVerstappen Delivers At A Very Orange Zandvoort!Verstappen Wins At A Very Wet Spa As Russell Stars