The 2021 Formula 1 season moved on this weekend to the Circuit Paul Ricard, located at Le Castellet in the south of France, just 90 miles from Monaco, and after a dramatic 53 laps around the vividly coloured track it was Red Bull’s Max Verstappen who emerged this afternoon with the French Grand Prix victory spoils, extending his championship lead over Mercedes’ Sir Lewis Hamilton to 12 points. 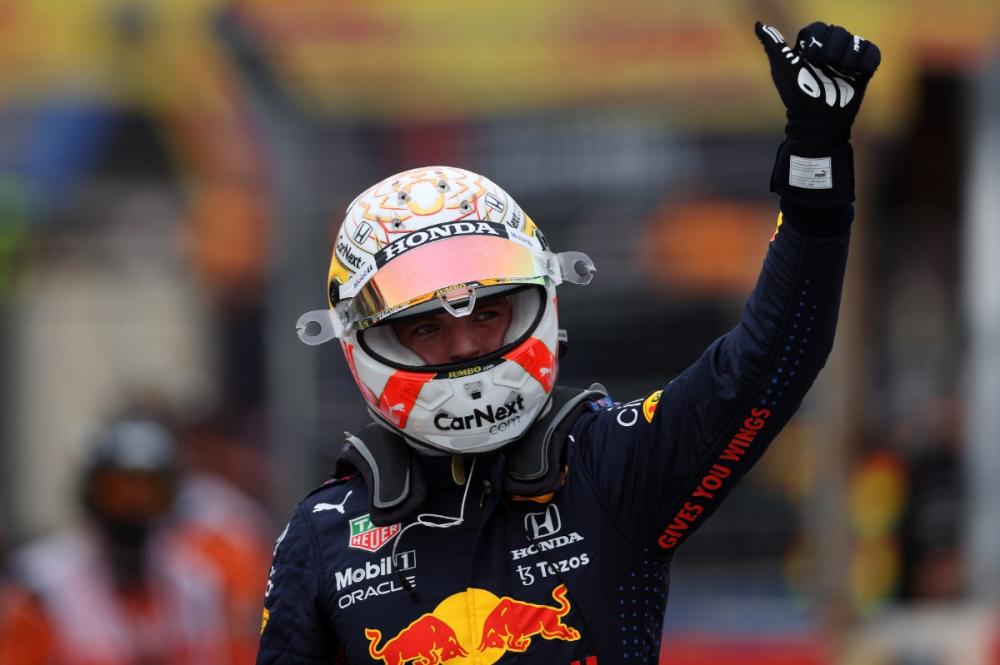 Red Bull’s Max Verstappen had to fight hard for a thrilling victory in France
This race had last been held in 2019, with the 2020 event cancelled due to the pandemic, and it went down in history as one of the most processional Grands Prix for a long time. As such, hopes were not high for a thrilling spectacle this time round, but it’s always best to be optimistic and what a race we ended up having.

After the pair of dramatic left rear tyre failures for Lance Stroll’s Aston Martin and Verstappen’s Red Bull at the previous Grand Prix in Azerbaijan Pirelli had undertaken a detailed investigation. As a result of its findings, from this weekend’s French race onwards the FIA governing body introduced additional checks to try to ensure teams do not run tyres below the minimum recommended pressures to gain a potential performance advantage, if possibly risking safety. Both Aston Martin and Red Bull denied they had run their tyres below the minimum allowed pressure in Baku, which Verstappen strongly confirmed re his own team, but Hamilton chose to disagree with his main championship rival on the subject.

There are always rumours in the paddock about which driver might be going where next and sometimes this is based on hard fact, but often not. One firm piece of news arrived though on the Wednesday before the Paul Ricard weekend when the Alpine team announced that it had extended Esteban Ocon’s contract for a further three years, keeping him at the French outfit until the end of the 2024 season. Whilst Ocon will retain his existing management link with Mercedes, the promising 24 year old Frenchman will focus solely on Alpine for the foreseeable future and is thus out of the running for any potential move to Mercedes in the short term at least. 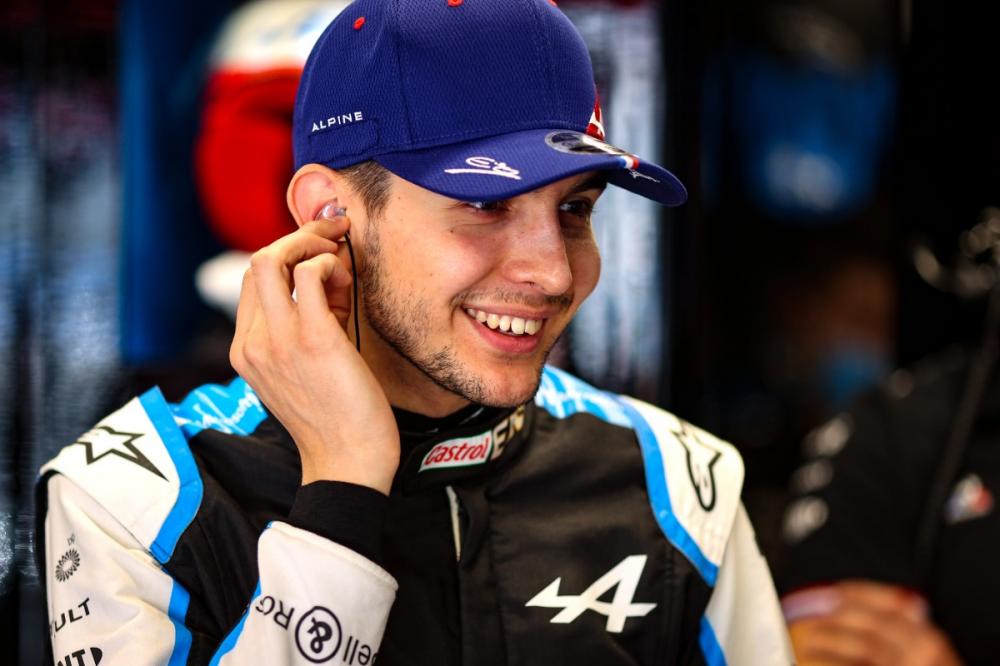 Esteban Ocon is now set to remain with the Alpine team until at least the end of 2024
In contrast, the highly regarded George Russell is still very much a contender to replace Valtteri Bottas at Mercedes next year, with both drivers out of contract at the end of 2021. However, team principal and part owner Toto Wolff dampened speculation about any announcement in the near future, firstly indicating in France that a decision would probably not be made until the post season winter period, before later saying he had been joking about such a late call. Wolff did at least confirm that he is hoping by the summer break to have agreed a contract extension with Hamilton for 2022 and possibly beyond.

Elsewhere on the F1 news front, there has been growing speculation of late about whether the British government will allow next month’s three day British Grand Prix event to operate with a capacity crowd and upto 140,000 spectators present on race day. This round of the Formula 1 world championship is set to take place with or without fans present from 16-18 July, with the main event taking place on the day before all remaining lockdown restrictions are currently due to be lifted.

Turning back to Paul Ricard, tyre degradation at this track is low and this, combined with the typical pitstop time loss of around 25 seconds, has meant a one stop race strategy is usually the preferred option. With harder Pirelli rubber also being used compared to the previous two Grands Prix, this too supported single stop strategies.

Mercedes arrived in France with Hamilton and Bottas having swapped cars, which seemed quite unusual but which the team simply referred to as merely a planned chassis rotation. A new shroud had also been fitted around the steering wheel “magic button” which alters the brake bias system to put extra heat into the front tyres before a race start or qualifying lap. The team had made the adjustment as it was understandably keen to avoid any repetition of Hamilton’s error at the restart in Azerbaijan when he accidentally activated the system and flew off the track at the first corner. 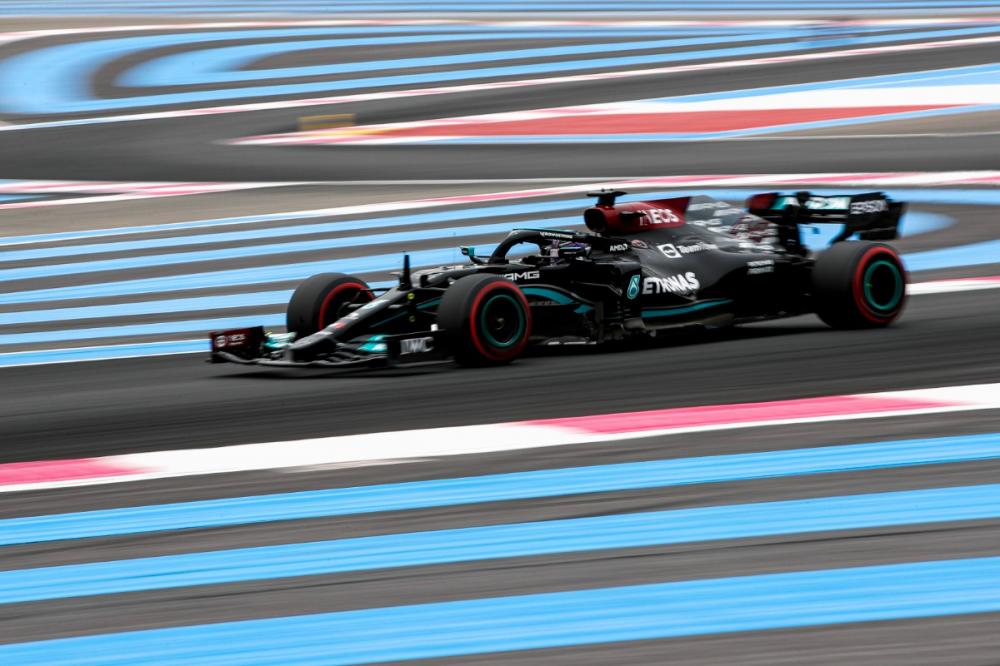 Hamilton’s one stop strategy was ultimately bettered by the twice stopping Verstappen
In Friday’s opening free practice period it was Bottas who topped the timesheets ahead of Hamilton, with Red Bull’s Verstappen and Sergio Pérez the best of the rest. However, before the later second session Red Bull made changes to the set-up of Verstappen’s car and the young Dutch charger proceeded to go fastest, albeit just 0.008s clear of Bottas and with Hamilton third.


Also by Graham Read...
A Return Visit To Anglesey CircuitA McLaren 1-2 In Italy As Hamilton And Verstappen Crash OutRussell To Mercedes And Bottas To Alfa RomeoVerstappen Delivers At A Very Orange Zandvoort!Verstappen Wins At A Very Wet Spa As Russell Stars
Come Saturday’s final practice Verstappen again showed the rest the way, as Bottas remained his closest challenger and Hamilton was almost a second adrift down in fifth place. Practice is just practice though and things only really got serious come the all-important qualifying hour, which began at 3pm local time yesterday. The first part of the three stage process was twice halted by red flags after AlphaTauri’s Yuki Tsunoda went into the barriers at Turn 1 and then Mick Schumacher had his own barrier greeting moment after losing control. It was a shame for the young German as he was 14th fastest at the time and was thus set to compete in the second part of qualifying for the first time in his fledgling F1 career.

Out front the qualifying battle was between Red Bull and Mercedes and the delighted Verstappen claimed his first pole position since the opening race of the season in Bahrain. The set-up of Hamilton’s car was altered shortly before qualifying began and the reigning champion managed to set the second quickest time, if a quarter of a second slower. To their rear Bottas and Pérez helped themselves to the second row on the grid for the following day’s Grand Prix, with Ferrari’s Carlos Sainz and AlphaTauri’s Pierre Gasly completing the top six.

Come race day there was rain during the morning and as the cars headed from their pit garages to the grid the conditions were decidedly overcast, windy and somewhat cooler. However, it was wonderful to see plenty of enthusiastic fans present again in at least some of the grandstands. With F1’s two big hitters right at the front and desperate to lead into Turn 1 there was tangible tension in the air as the start neared and when those famous red lights went out it was Verstappen who led Hamilton into the opening left and right sweep. 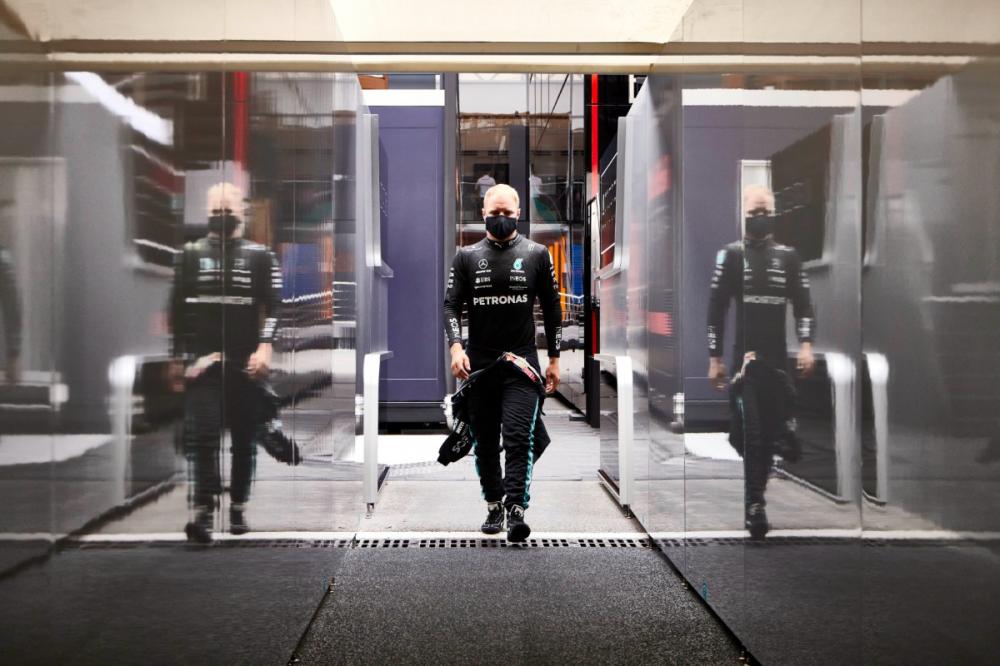 Bottas was far from happy after Mercedes ignored his suggestion of switching to a two stop strategy
The Red Bull team leader lost control of the rear of his car though and ran wide at Turn 2, allowing Hamilton to blast past into the lead. This set the pattern for the opening stages of the race as Hamilton led from Verstappen, Bottas and Pérez, with Sainz and Gasly the best of the rest. Bottas was the first of the leading quartet to pit as he switched from medium to hard specification tyres on lap 17, triggering a flurry of identical stops including those for Verstappen and then Hamilton two tours later. Crucially the undercut, stopping before Hamilton, worked for Red Bull as this strategy and a great out lap by Verstappen meant that the Mercedes driver rejoined behind his rival, with the now leading Pérez yet to stop. This left us with a gripping three-way battle between Verstappen, Hamilton and Bottas for second place and this became a fight for the podium positions after Pérez pitted on lap 24 and headed back onto the circuit in fourth position.

With nine laps remaining, Verstappen’s next target was the leading Hamilton who was five seconds clear at this stage. Whilst Pérez caught and passed Bottas for third, we were all treated to some real edge-of-the-seat action as the remaining laps ticked away and the gap between the front pair became ever less. Ultimately Verstappen caught and passed Hamilton on the penultimate lap, leading to a podium trio of Verstappen, Hamilton and Pérez, with the Dutch ace also picking up the extra point for the fastest race lap. A disgruntled Bottas finished fourth ahead of McLaren’s Lando Norris and Daniel Ricciardo which signalled a strong afternoon’s work for the Woking based team. To their rear Gasly was seventh at his home race, one place ahead of Alpine’s Fernando Alonso, and Aston Martin completed the top ten points scoring finishers with Sebastian Vettel and Stroll. Ferrari had a particularly bad day at the office though as they ended up pointless, with Sainz only 11th and Leclerc 16th.


McLaren’s Lando Norris finished a fine fifth, bettered only by Red Bull and Mercedes
Next up in this pandemic impacted season we have a brace of Grands Prix at Austria’s Red Bull Ring circuit. Located near rural Spielberg, it is very much one of the most scenic tracks I have ever reported from and the racing there is usually spectacular and unpredictable, so let’s hope for more exciting action over these two forthcoming weekends before the focus then shifts to Silverstone and the British Grand Prix.