With lockdown restrictions enabling only local walks and the weather outside hardly conducive to a long walk, now is a good time to start planning routes for the summer months – compiling a “to be walked” list, that for those like me, already runs to several sheets of paper.

Roche Abbey is located in South Yorkshire, close to the Nottingham county border. Owned and maintained by the English Heritage, in usual times it is a popular tourist attraction which can be visited for a fee of £5.50 (adults) and £3.30 for children. It is currently closed until 27th March 2021, however, with a number of public footpaths in proximity, one can easily glimpse at the former Cistercian Monastery as part of a gentle stroll, or longer hike. 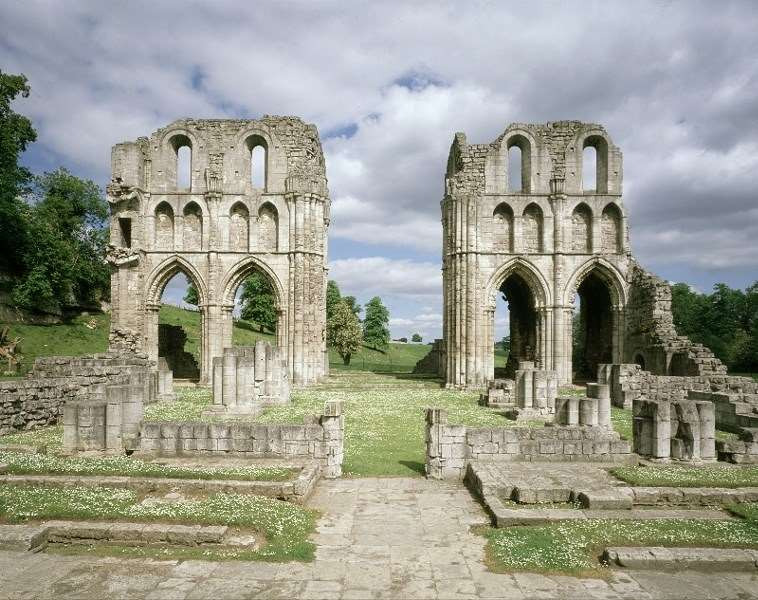 Roche Abbey. Photo by English Heritage
Founded in 1147, Roche Abbey was one of Yorkshire’s smaller Cistercian abbeys, others such as Rievaulx Abbey housed over 600 men, and Fountains Abbey and Byland Abbey each held over 250. One of the striking aspects of the ruins are the remains of the church, considered to be a prime example of early Gothic architecture – a style conceived and introduced in the Paris region in the 1140s. The gatehouse, built in the early 13th century, also remains relatively intact, having survived the mass dismantling of its buildings during its suppression and dissolution in 1538, under Henry VIII. At its peak, the abbey housed about 50 monks and 100 lay brothers and servants, however, at the time of dissolution, it is uncertain quite how many still resided there. Abbey records have been destroyed and some sources state it was home to about 14 monks, others cite ‘the document of surrender’ stating 22 monks and similar number of servants were still in residence. The closure of the abbey saw most of its valuable contents taken away by local residents, including much of the timber, lead and stone. By surrendering the monastery to the king’s commissioners voluntarily, the remaining monks were entitled to receive a pension, but the almost complete destruction of the abbey buildings ensured that the community would not be able to reform. 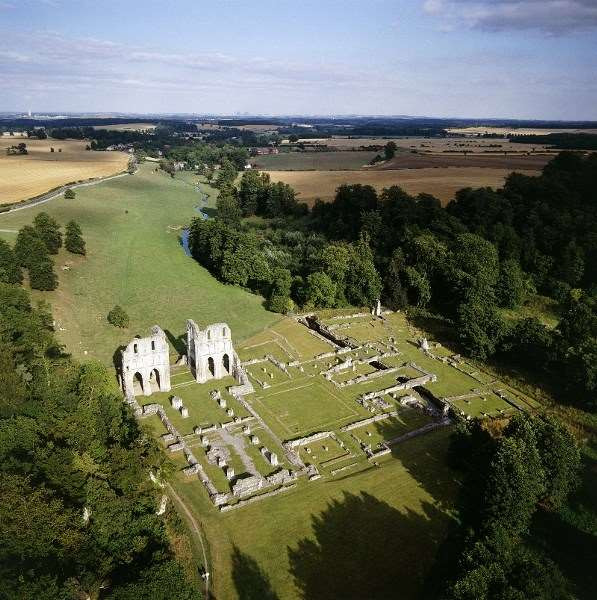 Roche Abbey. Photo by English Heritage
In the 1770s, the land and its ruins had become property of the Fourth Earl of Scarborough, Richard Lumley-Sanderson, appointed by the Crown as deputy lieutenant of the West Riding of Yorkshire in 1757. The estate had entered the family having been passed to his predecessor, Thomas Lumley, 3rd Earl of Scarborough in the early eighteenth century. Lumley-Sanderson appointed the landscape architect, Lancelot ‘Capability’ Brown to “bring ‘order’ to the valley” – essentially to redevelop the landscape in line with modern tastes. In addition to creating a waterfall to tumble from the Laughton Pond and constructing a lake and islands over the southern buildings, he also levelled up many of the ruined walls to construct a plateau upon which a banqueting lodge was subsequently built to entertain guests of the resident Earl.

By the 19th century, the then Earls of Scarborough started to reverse this process, instead wanting to reveal the site as an artefact, one to be studied and explored. Beginning in the 1880s, instigated by the 10th Earl of Scarborough, Aldred Lumley, the process took over 80 years, excavating the ruins of Roche Abbey from under the wooded parklands lain by Capability Brown. The site was acquired by English Heritage in 1984.


Also by Caroline Spalding...
Interview: Bethany CliftReview: Ordesa - Manuel VilasLast One At The Party By Bethany Clift: A ReviewArtistry of Lancashire: Jane Richmond'There Is No Such Thing As Fate, Because There Is Nobody In Control': My Name Is Monster By Katie Hale
For short walks, there are plenty of options. Beginning from the village of Firbeck, you can follow the bridleway from the Black Lion Inn (postcode S81 8JY) towards Stone, perhaps diverting through Stubbing’s Wood. Close to the ruins, a path runs alongside Laughton Pond and then splits, giving the option of walking either side of Hooton Dike, running through Kings Wood. From either path, you can continue towards Laughton en le Morthen to visit the Motte & Bailey of Castle Hill, returning to Firbeck using the path passing the school and St John’s Church. This becomes a bridleway marked Kirk Croft Road, bringing you to Thwaite House Bridge, south-west of Firbeck from where you can return to the start via Penny Lane. This route is approximately 7.5 miles and would require OS Explorer 279.

Alternatively, from Roche Abbey, you can continue north-west alongside the river through Nor Wood, crossing the railway to follow Maltby Dike to Hooten Levitt. There you can loop around, following the path back toward Nor Wood, but instead taking the path that runs beneath the river, passing Bullatree Hill Farm.

To the north-east of Roche Abbey sits the extensive Sandbeck Park, a mixture of pasture and arable land which contains two lakes. The principal building, Sandbeck Hall, was built around 1765 for the Fourth Earl of Scarborough. The house and grounds, occupying approx. 250 hectares, are now a private residence, therefore no access to the public is allowed.