Both the drivers and constructors championships had already been settled again in Mercedes’ favour for a seventh year running by the time the Formula 1 circus pitched camp in Bahrain this weekend for the first of two consecutive races before the finale in Abu Dhabi seven days later, but there was still much to fight for amongst those wanting to be the best of the rest. Come the chequered flag though it was business as usual as Lewis Hamilton added another victory to his lengthy CV in his Mercedes W11, the fastest car in the entire history of F1. The event was overshadowed though by a horrific opening lap accident for Haas driver Romain Grosjean. 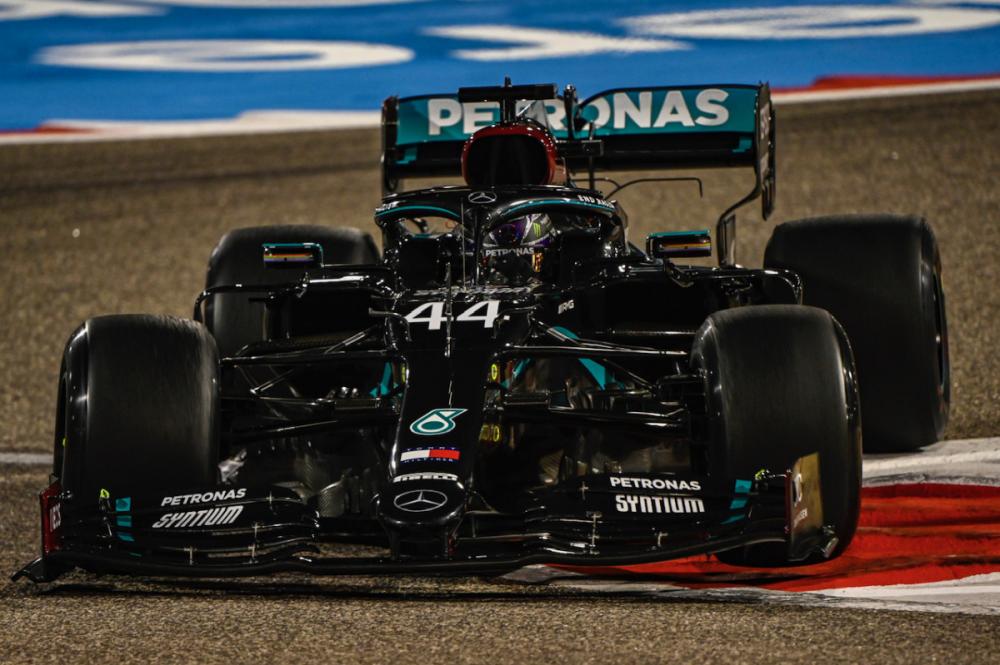 Lewis Hamilton emerged on top again under the Bahraini floodlights
This 57 lap round of the Formula 1 world championship was scheduled as a twilight event, starting at 17.10 local time and using the same 3.4 mile circuit layout as in the past. Sadly the global pandemic meant that the only spectators allowed to attend were some locally based frontline health workers and first responders. Glancing round the paddock, Red Bull’s experienced sporting director Jonathan Wheatley was also absent after testing positive for COVID-19 during mandatory pre-Grand Prix weekend testing in the UK and was self-isolating at home.

As for other news, prior to this opening race weekend in Bahrain it had been confirmed that next year the safety car duties will be shared between longtime incumbent Mercedes-Benz and also newcomer Aston Martin. The reasons are twofold - cost and also the British luxury car manufacturer’s desire to increase its worldwide exposure. Mercedes-Benz will continue to provide the medical cars though with their larger luggage capacity. Also, with Ben Edwards having opted to step down from his Channel 4 commentating duties with effect from next season, Alex Jacques will take over his role. Jacques is already well known in the motorsport world, having provided commentary for the official F1 television channel as well as F2, F3 and Esports. 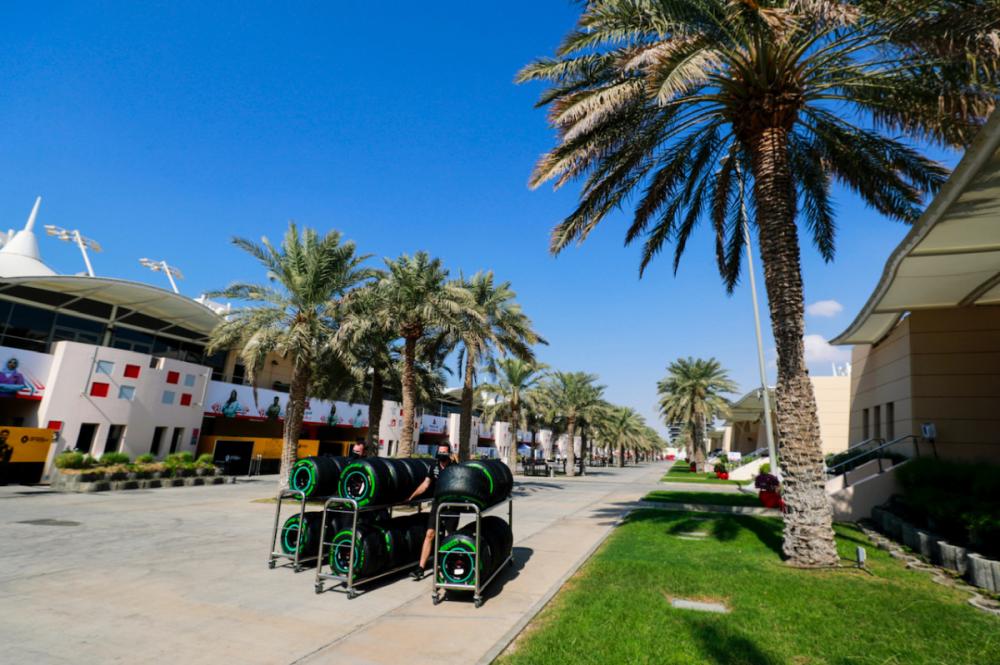 The warm sunny weather was very much welcomed by team personnel
The weekend’s opening free practice session began at 2pm local time on Friday and the teams spent part of this and the following one getting to know more about Pirelli’s new tyres for next season, which subsequently came in for criticism from numerous drivers. Alfa Romeo reserve driver Robert Kubica took over Kimi Räikkönen’s car, the Polish reserve driver enjoying a fourth practice outing of the year whilst having also driven in this season’s German DTM touring car championship. Williams also gave their Israeli-French test driver Roy Nissany a run in place of regular pedaller George Russell. Both were never going to feature near the top of the timesheets as Hamilton and Valtteri Bottas dominated proceedings for Mercedes, with Racing Point’s Sergio Perez third fastest but significantly almost a second off the pace.

Come the later second practice period Hamilton again went quickest ahead of Red Bull’s Max Verstappen and the other black Mercedes, but red flags had to fly on two occasions. Firstly after under pressure Alex Albon had crashed his Red Bull heavily at the final corner, not helping his chances of retaining the seat for next year, and then when a stray dog managed to find its way onto the circuit. This led to Ferrari’s Sebastian Vettel quipping over his radio “If I’d known we were allowed dogs, I’d have brought mine” and launching into his own version of the popular Baha Men’s song “Who Let The Dogs Out”! The dog became the talk of the paddock and was subsequently caught and taken to a local animal rescue centre, where staff asked for suggestions for a suitable name. At Imola last month the circuit’s paddock cat called Formulino had proved equally popular.

After the standard Friday drivers briefing F1’s race director Michael Masi took the unusual step of abandoning the lap time deletions policy for those who chose to run wide at Turn 4, 33 such laps having been erased during the opening two practice sessions and with Hamilton the worst offender. It was felt that retention of the measure could have adversely affected overtaking opportunities during the Grand Prix and with there being little gain in lap time from leaving the circuit. 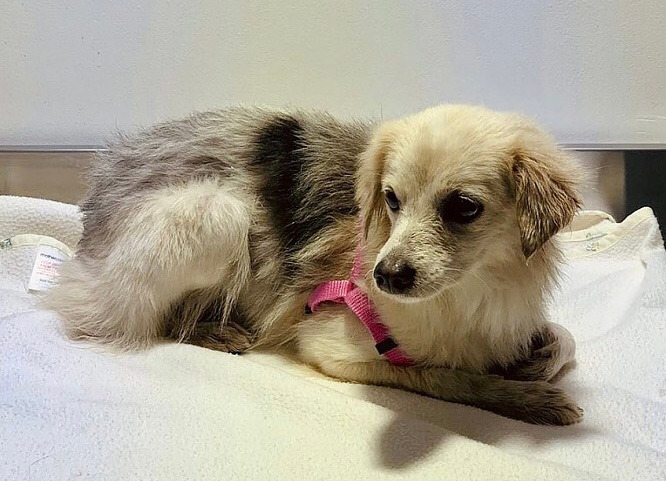 The popular stray dog who tried to set his own lap time in the second practice session!
In Saturday’s final practice period it was Verstappen who led the way ahead of the Mercedes duo and come the floodlit qualifying hour the action had to be redflagged again during the second of its three parts when Carlos Sainz’s McLaren ground to a halt at the first corner with a brake issue. When the track went live again it was soon game over for struggling Ferrari as both Vettel and Charles Leclerc were eliminated and in the subsequent top ten shootout Hamilton claimed the 98th pole position of his F1 career with a new track record. It also proved to be Mercedes’ eleventh front row lockout in fifteen races so far this season as Bottas joined his team-mate on the front row, with the Red Bulls of Verstappen and Albon set to start the following day’s Grand Prix right behind them.

It’s a flat out 350 metre sprint from the grid down to the braking zone for the opening righthand corner, with traction assisted by the circuit’s highly abrasive surface, and when the red lights went out Hamilton, Verstappen and Perez made great starts as the trio led the screaming pack of cars whereas Bottas dropped back to sixth. However, the race was instantly redflagged when Haas’ Romain Grosjean cut across in front of the AlphaTauri of Daniil Kvyat and made a horrendous impact with the righthand barrier. The severity of the impact ripped Grosjean’s car in two and it immediately became a fireball, with the driver still in the front part which was wedged into the barrier amidst the flames.

Incredibly Grosjean remained conscious despite the high G impact and managed to start to climb clear of the wreckage, helped by F1’s Dr Ian Roberts and the medical car driver Alan van der Merwe who were quickly on the scene. If the Haas driver had been knocked unconscious and unable to extricate himself, the outcome could easily have been so much worse. 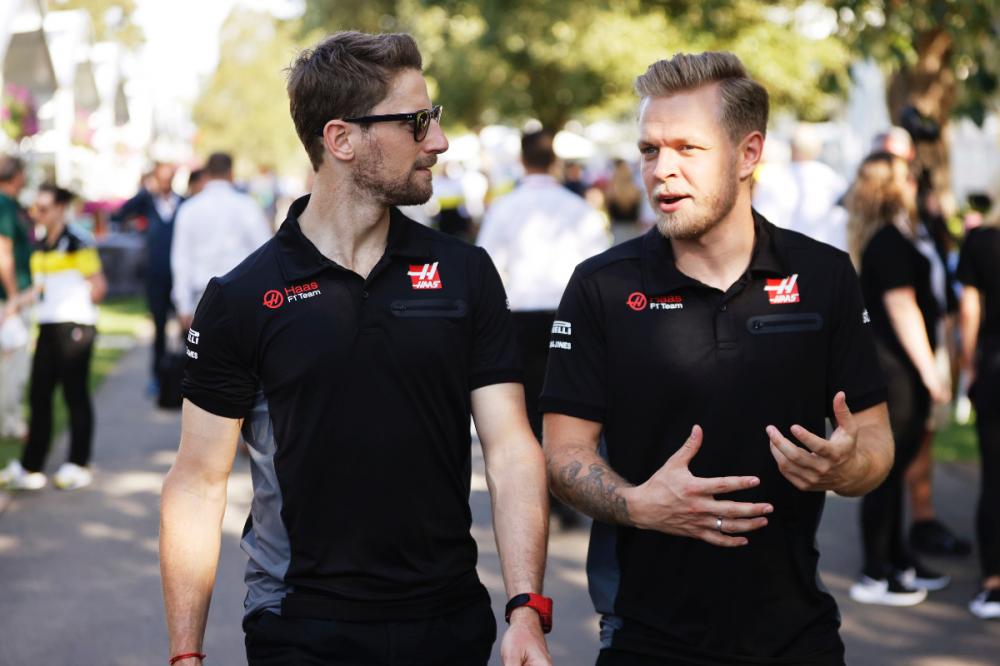 Haas’ Romain Grosjean (left) was very fortunate to avoid life-threatening injuries in a horrendous first lap accident
Grosjean was taken to the circuit’s medical centre and then to a local hospital, suffering from minor burns to his hands and ankles and suspected broken ribs, but in years gone by such a severe accident would almost certainly have been fatal. As such, the incident was such a tribute to the ongoing safety improvements constantly being made in relation to F1 car design, including of course the halo device which probably saved Grosjean’s life today.

Every motorsport reporting media pass I have ever been issued with and every ticket bought by fans bear reminders that motorsport can be dangerous and today was such a stark reminder, with the whole F1 world issuing a huge sigh of relief that the outcome wasn’t far worse. Nevertheless, the debris was soon being cleared away and the damaged barriers replaced as preparations for the restart got underway.

When the Grand Prix recommenced we again had Hamilton, Verstappen and Perez out front, but there was more opening lap drama and the need for the safety car when Kvyat made contact with Lance Stroll’s Racing Point car, inverting it at slow speed. The Canadian was uninjured, but the Russian driver received a subsequent ten second penalty for his behaviour. 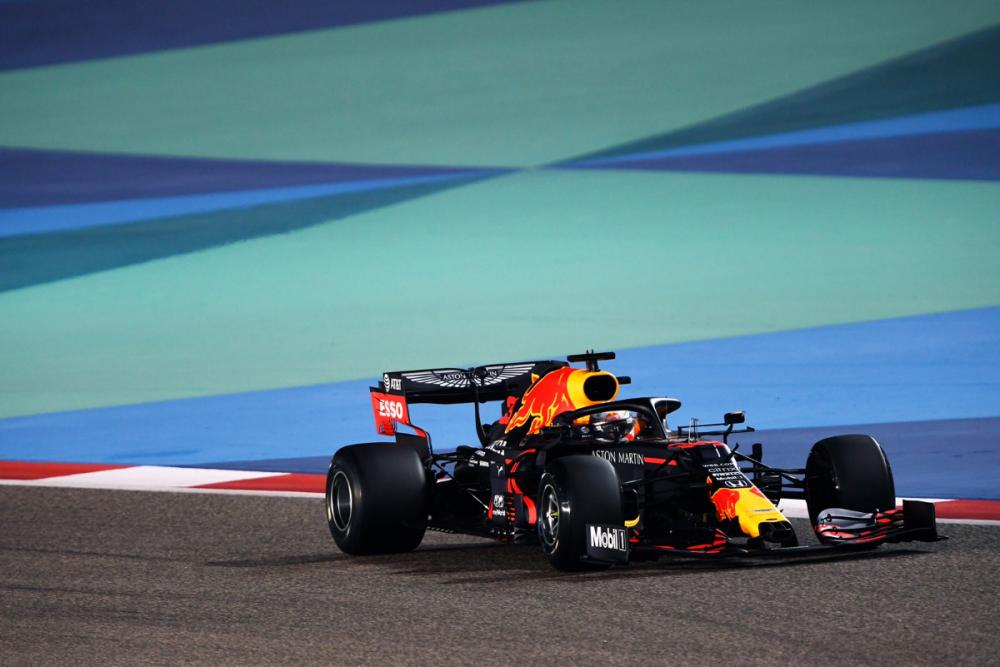 Max Verstappen’s Red Bull still couldn’t match the pace of Hamilton’s Mercedes
With the safety car returning to its usual pit lane resting place at the end of lap eight we went racing again and, with all the frontrunners looking set to undertake two stop strategies, Hamilton leading Verstappen and Perez was essentially the story of the Grand Prix with Albon looking the best of the rest. With ten tours remaining Verstappen pitted for a third time, switching from hard to medium specification tyres in search of the extra point for the fastest lap of the race, something which the Dutch charger achieved as soon as he returned on track.

The race had one final twist of fate to offer when with just three laps to go poor Perez lost a pretty much certain third place finish when his car’s power unit let go in a cloud of smoke and more flames, as if we hadn’t already seen enough of the latter earlier. This brought the safety car into play again and the Grand Prix finally ended behind it, with Hamilton, Verstappen and Albon on the podium. It was a good day at the office for McLaren as Lando Norris and Sainz finished fourth and fifth ahead of AlphaTauri’s Pierre Gasly, but it was very much another race for Ferrari to forget as both drivers struggled. 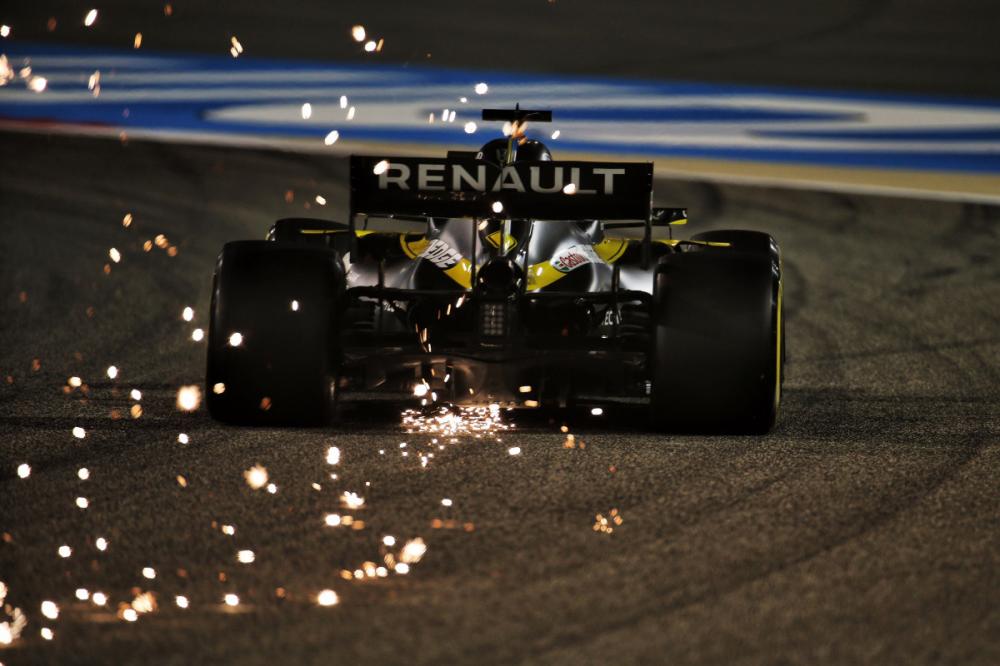 Daniel Ricciardo’s Renault sends sparks flying into the night air
Interestingly Perez, who still doesn’t have an F1 drive for next year despite being in the best form of his whole career and whose only remaining option would seem to be if Red Bull sign him to replace Albon, has called a press conference in Bahrain for 20.30 tomorrow local time. This has led to speculation as the reason has not been revealed. It might relate to a move to Red Bull, but the Milton Keynes based team has already said that any decision about who will partner Verstappen next year may well not be made until after the end of the season and you would in any case expect any such announcement to come from Red Bull first rather than Perez. Alternatively and perhaps more likely, the Mexican may be set to announce a sabbatical from F1 next year, other racing plans or even his retirement. We’ll know tomorrow. 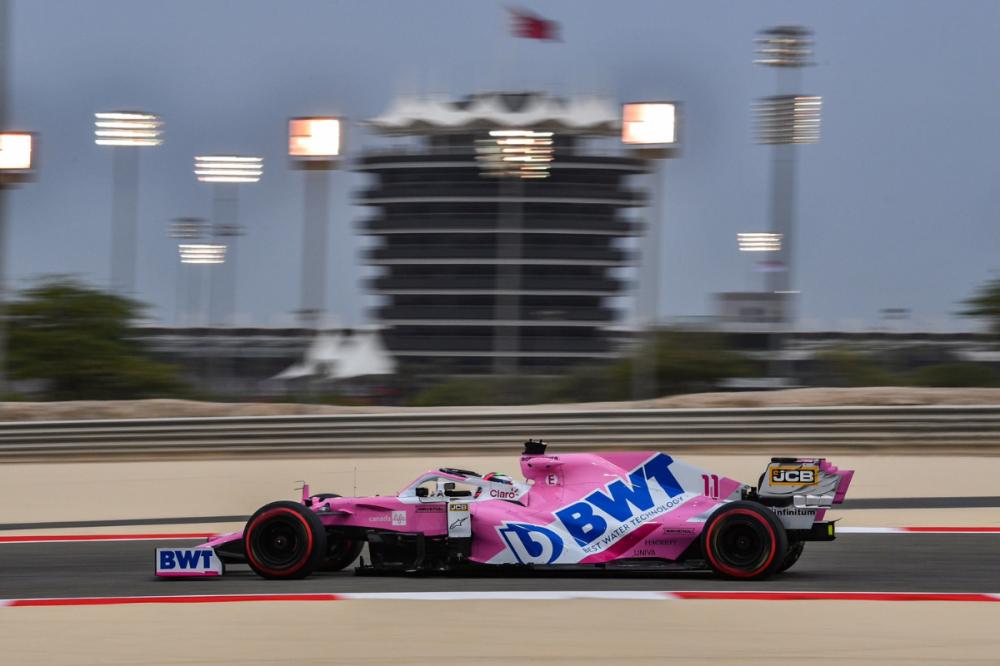 Racing Point’s Sergio Perez is driving so well, but might not be in F1 next year
The Formula 1 world will be remaining at the same Bahraini venue for next weekend’s Sakhir Grand Prix, named after the track’s location. There will be a crucial difference though as the faster and shorter 2.3 mile outer loop will be used and the action should come thick and fast in the 87 lap race. With Williams’ Russell already predicting it will be “bonkers” it should be worth watching!