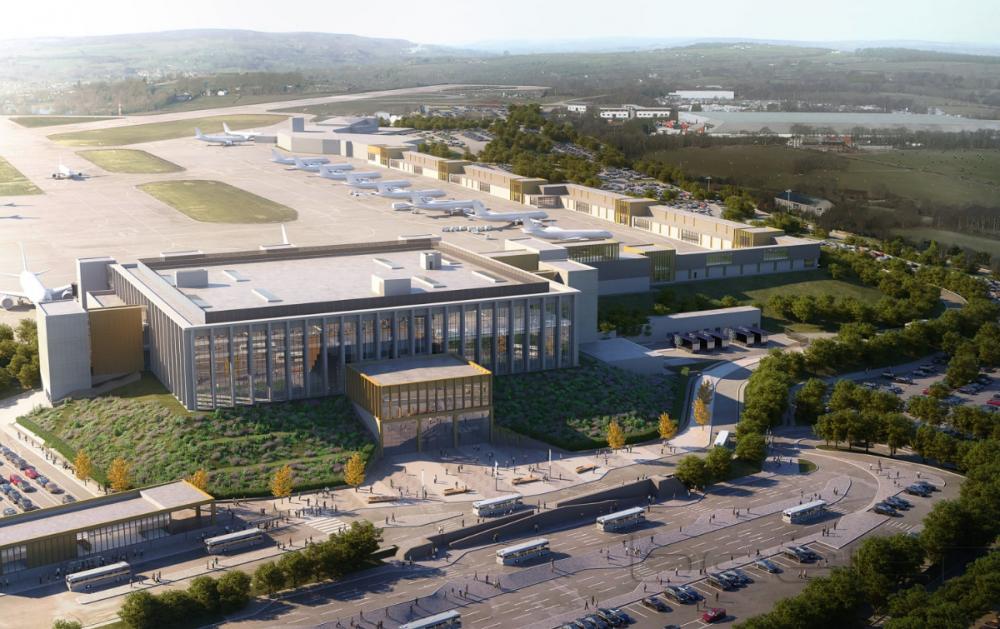 The proposed new air terminal at LBA
A coalition of climate and social justice campaigners from across West Yorkshire is calling on West Yorkshire Combined Authority (WYCA) to clarify exactly how much public money it is proposing to commit towards the new transport infrastructure required as a result of the proposed expansion of Leeds Bradford Airport (LBA). This would result in a growth in passengers from 4M to 7M per annum by 2030, and carbon emissions from the airport and flights increasing by 51%, which the campaigners highlight would threaten West Yorkshire’s own Climate Emergency reduction targets.

The coalition is asking WYCA, and the leaders of each of the 5 West Yorkshire councils, to outline how much they will be contributing towards the £42 million cost of a proposed LBA Parkway rail station and the new link road connecting it to the airport. To date, WYCA has suggested that the airport’s current offer to pay just 3.6% of the cost of the schemes is inadequate, but that 25% might be appropriate. However national Government policy requires that the airport’s private operator should have to pay the majority of the scheme’s costs itself since it is responsible for the proposed expansion. The campaigners are asking whether WYCA intends to apply the requirements of this government policy to the funding of LBA infrastructure.

The coalition is also asking WYCA how this use of public money to support airport expansion is consistent with the Combined Authority’s own newly published Carbon Emissions Reduction Pathways (CERP) study which has identified the huge scale of the carbon reduction required across all of West Yorkshire if it is to achieve its own 2038 Net Zero target. The CERP report has highlighted that, if the region is going to reach that target, LBA passenger numbers cannot increase beyond their existing level. The campaigners are also pointing out that the national Climate Change Committee carbon budget report published in December indicated that no growth in UK airport capacity could be considered until 2035, and that by then aviation emissions must have reduced by around 50% from where there were in 2019.

Simon Bowens from Friends of the Earth said:

“We believe that much of WYCA’s proposed transport capital investment programme constitutes a public subsidy by the West Yorkshire authorities to increase climate change. In effect, it is a public subsidy by our local councils to undermine their own Climate Emergency response!”