Grandad And The War Of The Naughty Picture And Other Tales

First Episode
Next Episode
Latest Episode
After Grandad married again – his nephew’s widow, Margaret Gregory- they settled down in the house Grandad had lived in for the past forty or so years. He wouldn’t have contemplated moving, as directly behind his house, with just a narrow lane between, was the smallholding where he kept his poultry. He specialised in Rhode Island Reds and White Leghorns.


photo by Dru Kelly
‘Aunt Margaret’, as I called her, moved from Oldham, and soon settled in with Grandad at his house. It didn’t occur to me at the time (I was only seventeen, after all) that the house and all its furniture remained exactly as Grandma had had it, even down to the ornaments and pictures. Probably this all made it easier for me, as little had changed. I still went round there most days (at least, until I went to College), as I always had. I had known Aunt Margaret as long as I could remember, and was very fond of her.

She and Grandad got along fine, until their first Christmas together. What happened then was really my Dad’s fault.

He was Head Buyer for a heavy engineering firm, which made machinery for all over the world. He was always coming home with things he’d been given by the representatives of various companies, touting for business. Some of these ‘gifts’ (bribes) were quite substantial, others very small. I still have a pencil he was given, on the side of which is printed ‘Todd Bros. (St, Helens & Widnes) Ltd. Makers of Chain Drums Steelwork.’ Each Christmas, Dad was inundated with leather-bound pocket diaries, engraved in gold with his initials, J.K.B.M.. We rarely had to buy leaf-tea, as for some reason tins of this were regular gifts.

It is surprising just how many other things needed to be ordered and bought for Dad’s firm. Who knew a heavy engineering works needed so many brushes? When I got married, I was given a whole set of every sort of brush and broom in existence by someone Dad did business with, John Stubbs of Walter Phillips Brushworks, Accrington. It was one of the most useful and long-lasting things I was given.

Anyway, back to the Christmas of 1960. Amongst all the things which Dad was given were calendars, and he always gave one to his mother (Granny), and to Grandad and Grandma. This year, though, it was Grandad and Aunt Margaret. Unfortunately, Dad gave them a calendar which had a photograph on the front of a naked ‘lady’. I think he expected Grandad to put it up in his cabin on the smallholding: but no! Grandad stuck it up in the kitchen.

And thus began the War of the Naughty Picture.

This was conducted in silence. The calendar was never mentioned. Each day, Aunt Margaret would take a sheet of newspaper, and fasten it over the picture. At some point during the day, Grandad would remove the newspaper covering. A bit later, another sheet of newspaper would be placed over the offending calendar, only to be taken down an hour or two later. No word was ever spoken, and this went on day after day. 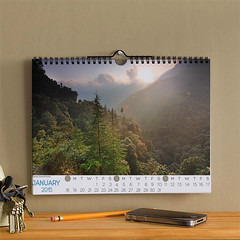 Photo by Neelima v
My parents and I became aware of this, and watched as the silent contest went on. When two months had passed, Dad took matters into his own hands. He picked a time when neither of the protagonists was in the kitchen, took down the calendar, and replaced it with one which had a scene from ‘The Lovely Lake District’. He concealed the naked lady under his jacket, made an excuse, and went home. What happened to it afterwards I do not know. Neither Grandad not Aunt Margaret made any mention of this mysterious substitution. At the end of the year, the ‘Lovely Lake District’ was replaced by ‘Delightful Devon’, followed in due course by ‘Scenic Suffolk’, ‘Glorious Gloucestershire’, ‘Beautiful Berkshire’, and so on. Thus was ‘Perfect Peace’ restored.

Grandad and A Whiff Of Novelty

In 1964, the first Christmas after I was married, my husband and I went to see Grandad and Aunt Margaret, to give them their presents; and they gave us ours. Grandad handed a small packet to David, and said, “Now, lad, before you open it, I’ll tell you what it is. It’s a packet of ten Whiffs, and I’ve had one out.”

Grandad had never smoked, but had decided to give it a try. He was ninety-two. As he said, “You’re never too old for an adventure.”

Grandad Does A Funny Walk

It cannot have come as a shock to my parents when I told them I was getting married, as I’d got engaged the previous September.

My soon-to-be fiancé and I had gone with my parents to Halifax to look round the shops, and have lunch in an hotel there. After lunch, we had moved to the lounge for coffee. The waiter had left the room, and Dad was standing, holding his cup, when David said to him, “Sir, I wish to become engaged to your daughter.”

The cup fell from dad’s hands, smashing on the floor, and coffee spattered everywhere. “Good God!” Dad exclaimed. “Whatever for?”

After that, my life was not my own. My mother took over, planning the wedding she wanted. It wasn’t what we wanted at all, and we said so, but Dad pleaded with us to let her have her own way. “My life won’t be worth living, otherwise,” he said.


Image by Marina Stroganova from Pixabay
So it was that the following May, I tottered down the aisle on stiletto heels and my dad’s arm, encased in white, with a trailing train, followed by my two friends, Vivienne and Delia, in midnight-blue velvet. I had to clutch Dad’s arm to keep upright and moving. Mum was in the front pew, in cream shot-silk and a blonde mink stole. It is always useful to have a stole, to help steal the show…….

My family was out in force, minus, of course, my mother’s sister (see ‘Grandad and the Siren’, and ‘Uncle Jim Pops His Clogs’, passim), her husband, and daughter. Granny was there, along with Grandad and Aunt Margaret, Dad’s two sisters Madge and Dorothy, my cousins Stephen and David; various friends of my parents (including John Stubbs of Walter Phillips Brushworks Accrington, aforementioned); David’s father, stepmother, brother John, their family and friends from London and Holyhead; and a VERY few of David’s and my friends; as we weren’t paying we weren’t allowed to have many. Most of the men were in morning dress, and the women’s hats would not have been out of place at Ascot.

When we came out of the church after the ceremony, there was a crowd of well-wishers waiting outside, including one of the scrap-metal merchants Dad dealt with, Tom Buckley. He was a big man, a former all-in wrestler, and he’d recently won seventy-five thousand pounds on the football pools – a fortune in those days. He’d celebrated this by buying his wife a parrot, and taking her to Blackpool for the weekend. He said he’d brought something for me, and handed me a small cardboard horseshoe.

The reception was at the Wellington Hotel. There was a lot of champagne, so much so that one of the guests keeled over, much to my mother’s horror.

Worse was to come. At the end of the lunch, but before the toasts, Grandad got up and said to the assembled guests, “I bet no-one can do a walk like this,” and he began to parade round the room, lolloping like Charles Laughton in ‘The Hunchback of Notre Dame,’ dragging one leg and pulling faces. I half-expected him to launch into song at any moment as well.

My mother was apoplectic. “Stop him!” she hissed at my Dad. But as he was sitting next to David’s stepmother, chatting away obliviously, this fell on deaf ears. “He’s ruining everything!” my mother moaned, as the guests looked on. Many of them had no idea who this odd old gentleman was.

The Best Man, though, grasped what was happening. He got up and steered Grandad back to his seat, in a quiet and gentle way. A few people who knew Grandad applauded his performance, but everyone else looked bemused.

“He’s ruined my day!” my mother said to me. “After everything I’ve done to make this day special, he’s shown me up. If this gets known, they won’t put the wedding in ‘Lancashire Life’!”

“Well, I enjoyed Grandad’s silly walk,” I said, “and what do you want to be in ‘Lancashire Life’ for? I certainly don’t.”

“After all I’ve done to make this day special for you!”

I could have pointed out none of it was of my choosing, but fortunately the speeches began, or there might really have been an embarrassing scene.

Yes, Grandad was from the working classes. His daughter’s upwards social mobility meant nothing to him. He’d had a hard early life, but nonetheless had a great sense of fun. He was a natural entertainer, a ‘one-off’. I doubt he’d ever heard of ‘Lancashire Life’.

A few months on, a picture of the wedding duly appeared in the magazine. It showed me grinning inanely, and David resembling a ‘Police are anxious to interview’ poster. Oh, dear.


Also by Kaye McGann...
The Morning AfterMy Friend RosemaryNo Fool Like A Young FoolFriday Night Is Amami NightGrandad Decides To Die
Next Episode