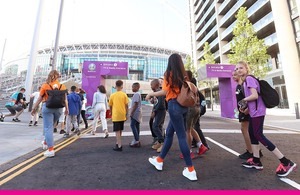 More than 60,000 fans will now be permitted to attend the semi-finals and final of UEFA EURO 2020 at Wembley Stadium, increasing attendance to 75% capacity during the latter stages of the tournament.

The move follows the confirmation last week that the round of 16 match on 29 June and semi-finals and final would be hosted with at least 40,000 fans under the third phase of the Government’s world-leading Events Research Programme (ERP). It will see the largest crowds assembled for a sporting event in the UK in more than 15 months.

All ticket holders will need to follow a number of strict entry requirements including having a negative COVID-19 test or proof of full vaccination - two doses received, 14 days before the fixture. Ticket holders registered with a GP in England will be able to display their proof of vaccination via the NHS App, or equivalent proof printed out, for example for people from Scotland and Wales. Ticket holders will also be able to display a NHS negative Lateral Flow Test result via email, test message or the NHS App.

Mark Bullingham, FA Chief Executive said:
"It is great that the Government has agreed to allow over 60,000 fans in Wembley for the final three matches of the tournament. It’s amazing how much atmosphere fans have been able to generate so far, so to have three times as many will be fantastic.

"We have always said that fans are the lifeblood of the game, so it’s brilliant that so many will get a chance to see the tournament finale. We hope that this programme lays the foundation for the safe return of fans in stadiums all across the country next season.

"Some of the biggest events in the summer’s sporting calendar, including the Wimbledon Tennis Championships, Challenge Cup Final and men’s international cricket involving England, Pakistan and Sri Lanka will also go ahead with greater capacities as part of the latest phase of the Government’s Events Research Programme."
Further details, including on ticket sales for these matches, will be communicated by UEFA in due course. However it is expected ticket holders in the UK who lost their tickets for the semi finals and final in the re-ballot will be at the front of the queue to be at the games.

Culture Secretary Oliver Dowden said:"We are thrilled that more fans will now be able to walk through the Wembley turnstiles and enjoy the finals of EURO 2020.

"As we continue to make progress on our roadmap out of lockdown, keeping the public safe remains our top priority. We have worked extremely closely with UEFA and the FA to ensure rigorous and tight public health measures are in place whilst allowing more fans to see the action live.

"The finals promise to be an unforgettable moment in our national recovery from the pandemic."

UEFA President Aleksander Ceferin said: "It is great news that so many fans will be able to watch the final three matches of the EURO 2020 at Wembley.

"The last 18 months have taught us – both on and off the pitch – how integral fans are to the fabric of the game.

"This tournament has been a beacon of hope to reassure people that we are returning to a more normal way of life and this is a further step along that road.

"I am grateful to the Prime Minister and the UK Government for their hard work in finalising these arrangements with us, to make the tournament final stages a great success in Wembley."

The next phase of the ERP will also include more sport and cultural pilots as the Government plans up to 20 indoor and outdoor events that will allow audience numbers to return close to full capacity. The pilots will continue to trial the use of covid status certification at mass participation events ahead of the outcome of the Cabinet Office’s ongoing COVID-status certification review.

These pilots will involve the ramping up of trialling the use of the NHS App and Lateral Flow Testing, as proof of a person’s COVID-status. Trials of the NHS App will be run to assess whether it can also be used to display a user’s natural immunity status. The gradual increase of capacity at Wembley Stadium throughout all three phases of the ERP is providing the opportunity to assess how we can best mitigate transmission risks and logistical challenges in preparation for fans returning to stadiums and events in greater numbers.

The pilots will also continue to develop additional scientific research and evidence, as well as implementation considerations, for Government, event organisers, and consumers in reopening events safely with a greater number of attendees.