‘From Small Things, Greatness’: A Single Thread By Tracy Chevalier

It’s strange how books make their way to you. In this case, a passing remark to a friend about my sister-in-law hoping to join the embroiderers’ group that maintains the altar cloths at York Minster, led immediately to her offering to lend her A Single Thread. By odd serendipity, the novel begins with a service of dedication in Winchester Cathedral for the newly-stitched hassocks, provided by the society of broderers. Obviously, as it was passing through my hands, I had to take the opportunity to read it. Well, it would be rude not to!

The opening description of the cathedral at the start of a service reflects the architectural beauty and reverence afforded to all such edifices, and the detailed descriptions of Winchester Cathedral throughout the novel make a visit seem an enticing prospect. The reader quickly meets the protagonist, Violet Speedwell, and shares her sense of rebellion when she is told she cannot participate in the service of dedication and must leave. It says it all that Violet remains and watches, fascinated, as she did not realise ‘hassocks required a benediction’. That said, Violet is an ordinary human being around whom Chevalier successfully weaves a compelling tale.

This bittersweet love story is set in the thirties, and realistically recreates life for the ‘surplus women’ like Violet who is a single woman, having lost her fiancé and her older brother in the Great War. She’s thirty eight but seems younger and has to find her own way; with World War Two looming, she has to fight even harder if she is to survive. A frugal existence eking out survival on the little money women were paid seems nothing as she faces prejudice and mistrust from both men, and married women who feel threatened. There is little pity and women who come to rely on each other are quickly tarred, rightly or wrongly, with a particular brush. 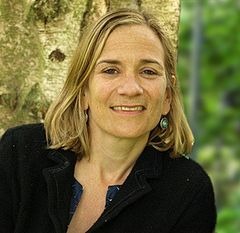 Tracy Chevalier
At the beginning of the story Violet has at last left home in Southampton, having lost patience with her domineering mother. Her beloved father,who made life bearable at home, has recently died. It is one death too many for Violet to bear and she is desperate to get away and find a new life for herself. But freedom, if not exactly happiness, is expensive in all sorts of ways. She has found herself lodgings with Mrs Harvey and a job as a typist with a local insurance firm, but she needs something (preferably inexpensive) to fill her time and discovers there is a place for her in the Cathedral society of embroiderers. She finds a way of making a lasting mark - ‘Ars longa, vita brevis, art is long, life is short’- as she engages in the detailed needlepoint of hassocks, runners, cushions and alms bags, which will be placed in the cathedral where they will be used for many years to come. There is even a hint of rebellion in the stitching.

Violet meets Arthur, a bellringer in the cathedral, and although he is many years her senior, she is drawn to him. Attraction to others is not easily explained. He is married and cares for his wife who has never recovered from losing their son in the war. It is Arthur who helps Violet to understand her own mother a little better, who explains that the pain of the loss of a child never leaves you. Arthur becomes something of a knight in shining armour. The bellringing provides a singularly effective metaphor as Violet becomes aware of the ‘pattern in the chaos’ after the bell peals have been explained. ‘Ropesight - being aware of what the others are doing…and how you fit in’ is an apt metaphor for Violet Speedwell.

This gentle tale meanders along, yet the reader becomes engrossed in the life of Violet and the people she meets, feels the unfairness of a woman’s lot at that time, and supports her minor rebellions in the hope that she will be rewarded with at least some slight sense of victory.


Also by Artis-Ann ...
‘So Many Dead In The Ashes’ : Dust Off The Bones by Paul HowarthMelody Of Peace: The Electric By Tim MurgatroydHe Knows I Know He Knows: Cradle Song By Robert EdricThe Best And The Absolute Worst: The Dressmaker’s Secret By Lorna CookCrimson Soil: Only Killers And Thieves By Paul Howarth
The society of the time is well depicted too, especially regarding attitudes to same sex relationships and unmarried mothers, as some characters refuse to bow to the conventions of the day. The author offers an authentic description of life in digs in the thirties, from the ‘thunder and lightning carpet’ to the antimacassars which ‘had to be smoothed’, the frugal meals, the lack of heat and the search for privacy behind a closed door. There is the difficulty of being a woman alone, the fear of a stranger in a cornfield – a theme which is repeated more than once. Chevalier even touches on the power of memory as Violet takes herself on a walking holiday, trying to recreate the journeys she took with her father and brothers when she was a child.

The novel has a number of great characters, some of whom are very likeable such as Tom, Arthur and Gilda, and some less so. There are impressive portraits of individual women like Violet’s mother, made bitter and furious by grief and the real-life head-broderer, Louisa Pesel, who emanates understanding and warmth.

This story is understated and gentle but no less powerful for that.


A Single Thread is published by The Borough Press